Of the numerous cancer treatments available today, not one has the ability to ensure a cancer-free future for the patient. Many people feel that the drawbacks of cancer treatment are not worth enduring because of their serious side effects, even with the possibility of becoming relatively cancer free.These side effects include hair loss, vomiting, as well as damage to the nervous system and vital organs, to name just a few (Canadian Cancer Society, 2015). People rendered weak by their cancer often experience severe post complications (Mayo Clinic, 2015).

In search of a more effective treatment that does not harm healthy somatic cells, the Central iGEM team has considered taking a different approach. Aduro BioTech Inc. is a means of inspiration for this team. Aduro, an established biotech company, has been practicing similar preliminary work involving synthetic biology. Aduro has engineered Listeria to elicit an immune response so that endothelial cells are attacked (Aduro, 2015).

According to Statistics Canada, cancer was recorded as the leading cause of death of Canadians in 2011, accounting for 29.9% of all deaths (Statistics Canada, 2014). Due to this incredibly high fatality rate, cancer has become a top priority for many organizations. The Central iGEM project is presenting an innovative approach to cancer treatment and research.

Central iGEM’s project is based on the idea of using antiangiogenic proteins, such as angiostatin, to potentially starve out cancerous growths. Angiogenesis is the process by which new blood vessels develop via cell-signalling pathways. In a healthy body, angiogenesis process is part of normal wound healing, however, it is also often exploited by malignant neoplasms in order to proliferate. Initially, tumours begin as small 1-2mm cubed structures (National Cancer Institute, 2015) that are harmless, but when there is an imbalance of proangiogenic factors, tumours are able to acquire their own blood supply. One of the most important proangiogenic factors is vascular endothelial growth factor (Hanrahan et al…, 2003).

Vascular endothelial growth factor (VEGF) is a potent stimulator of tumour growth and endothelial cell proliferation. It increases tumour permeability allowing the leakage of proangiogenic proteins into the tumour microenvironment. VEGF is triggered by hypoxia, and results in anaerobic proliferation. (Grothley, Kozlaff & Rosen, 2007). In many forms of cancer, VEGF plays a key role in early tumour development and metastatic progression.

In understanding the effects of angiogenesis in tumours, Central iGEM looked to create a construct that would inhibit angiogenesis. However, this construct would only be one of the three parts of the project required for therapeutic synthetic biology: localization to the tumour, production and delivery of the therapeutic protein, and a kill switch.

Angiostatin, which blocks tumour vasculature, is a highly potent inhibitor of angiogenesis (Dell’Eva, Pfeffer, Indraccolo, Albini & Noonan. 2002). It is derived from human plasminogen and is a proteolytic inhibitor of angiogenesis. Part of its antiangiogenic potency can be credited to blocking the secretion of VEGF within the body, which has been proven in various clinical trials done on mice. Angiostatin has been reported to decrease VEGF by 2.5 fold each day of therapy, consequently reducing tumour size (Sima, Zhang, Shao, Fant & Ma, 2004).

Most cancer cells rely on aerobic glycolysis, which is the transformation of glucose to pyruvate when limited amounts of oxygen are available. One of the products of aerobic glycolysis is lactic acid. This phenomenon of overproduction of lactic acid in tumours is commonly referred to as the Warburg Effect (Vander Heiden, Cantley, & Thompson, 2010). These increased lactic acid levels in the tumour microenvironment differentiate it from the rest of the body. From the information referenced in the paragraphs above, Central iGEM created a construct that is comprised of the following: 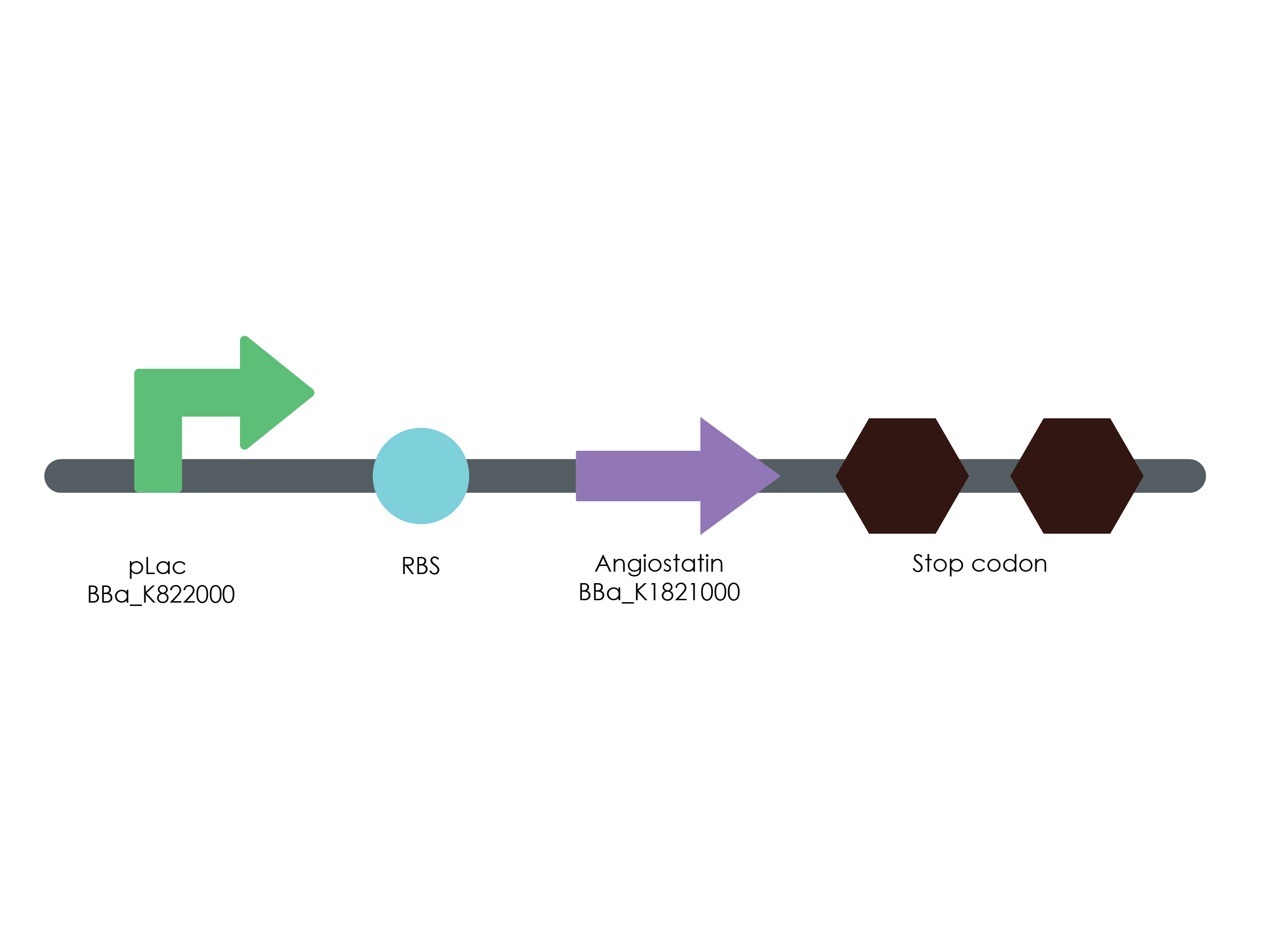 pLac was chosen as the promoter, as a result of the high lactic acid concentrations in the tumour microenvironment differentiating it from the rest of the body. The ribosomal binding site included in this biobrick will allow for protein synthesis.

As stated above, angiostatin was chosen due to it’s potency in preventing angiogenesis. To best predict how well this construct would function, Central iGEM would have to run 2 assays: the first is to characterize and understand how the pLac promoter functions with fluorescent assays, and the second to characterize the angiostatin and understand at what concentrations it inhibits angiogenesis. To do the former, another construct comprised of pLac and RFP would have to be created.

The pLac RFP construct is comprised of pLac and red fluorescent protein (RFP). This construct is designed to characterize and better define the pLac promoter through visual measurement. When the pLac promoter is working, one can measure the RFP secreted, in red fluorescent units (RFU), depicting the amount of RFP secreted, creating a better visual understanding of how well the promoter works, and characterizing the promoter.

The Central iGEM team wanted to focus on an area of the body where the tumor is situated in a non-sterile environment, to which bacteria could be delivered without needing to pass through the bloodstream. This would then minimize the opportunity for septic shock. With extensive research (Grothley, Kozlaff & Rosen, 2007), it was concluded that the cancer most suitable for this form of antiangiogenic treatment was Colorectal Cancer (CRC). There are three primary reasons for which this particular cancer was favourable: it is found in a non-sterile environment; the gastrointestinal tract (GIT) naturally clears out bacteria through its 3 day cycle and it happens to be VEGF-dependent. By targeting CRC, the risk of septic shock is eliminated since the bacteria would never have to enter the bloodstream. This is accomplished by using a commensal, non-pathogenic strain as the vector for the angiostatin-releasing sequence that can naturally be found in the GIT, such as lactobacillus (Schaffer M.D., Personal Contact). With this microenvironment, two new issues arose: angiostatin must be able to somehow cross the stomach wall to reach the tumour, and lactic acid would need to be present in order to use the pLac promoter. As a response to the need for permeability across the stomach wall, a different promoter was considered. More specifically, Central iGEM would use a cellulose promoter that would rapidly flood the GIT and allow for angiostatin to diffuse across the stomach wall and inhibit tumor growth. The possibility of a genetically-modified bacteria overproliferating is a great risk in biomedical research. This means that if the bacteria were to be inserted directly into the bloodstream, the bacteria must have a killswitch. However, the GIT clears itself out via a natural, frequently-occurring cycle, meaning that the bacteria would naturally be cleared out as well. Due to this evidence, a kill switch could be safely discarded. Since CRC is dependent on vascular endothelial growth factors, preventing angiogenesis becomes simpler when there is no need to be concerned about using various growth factors (Ellis, Takahashi, Liu & Shaheen, 2000).

To characterize and better understand the pLac promoter, the Central iGEM team has designed the following fluorescence assay.

1)Grow an overnight culture of pLac RFP, LacI RFP (as a positive control) and E. coli without plasmid (as a negative control).
2)Induce varying levels of lactic acid to the cells and measure RFU and OD.

As we were unable to run the assay and characterize the promoter, we were only able to predict the expected results. The following graphs depict the predicted results and assay design: 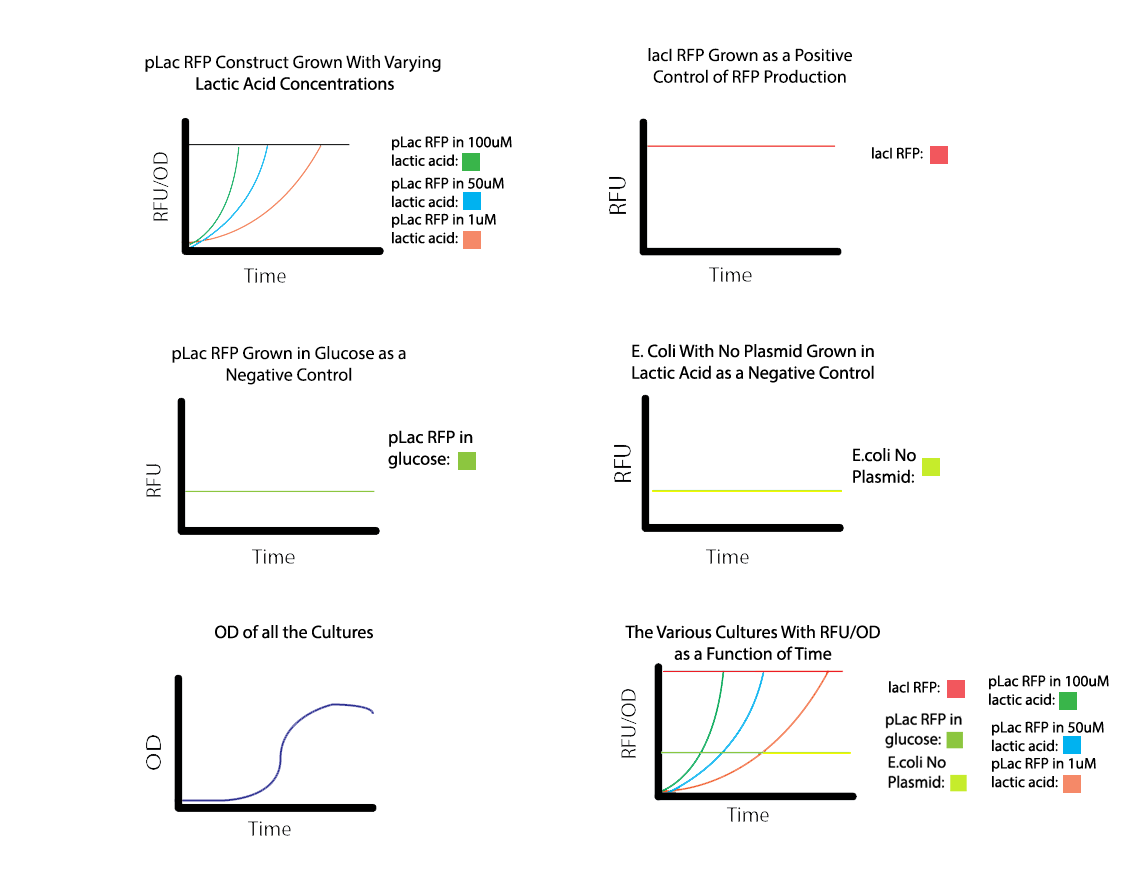 Once the lactic acid concentrations are known, they can be compared to the relative concentrations found in the body to better understand if this promoter would activate the construct in the tumour microenvironment.

Due to some concerns associated with E.Coli entering into the bloodstream, other bacteria such as lactobacillus, bifidobacterium, and bifidobacterium breve UCC2003 have been extensively looked into.

Lactobacillus is a commensal bacteria that lives in the digestive, urinary, and genital systems without causing any harm. It is currently used as a probiotic to treat digestion problems, skin disorders (ie. eczema, acne, canker sores), (Kuitunen, M., 2013) and high cholesterol. It is also added to yogurt to help improve digestive health. Because it is used as a probiotic and is commensal, using it as a chassis for the construct should not interfere with healthy bodily functioning.

There is a large range of bacterial species that can localize to tumours after intravenous (IV) injections. These include E coli, Vibrio cholerae, Clostridium, Bifidobacterium, Salmonella, and Listeria monocytogene. These bacteria activate when in the presence of tumours by exploiting the hypoxic microenvironment, which include poor immune surveillance and an increased availability of nutrients. (Anderson, Clarke, Arkin, & Voigt, 2006). These could also be potential chassis for the Central iGEM construct.

Bifidobacterium has been tested in mice and results (Cronin et al…, 2010) have shown that when ingested, this bacterium is able to translocate from the gastrointestinal tract to tumour sites. The bacterium translocates as the tumour site is hypoxic, which the anaerobic bacteria thrive in. Throughout the body, T cells attack the bacteria, preventing it from causing any harm elsewhere in the body, although they do not inhibit the bacteria from translocating. The absence of T cells around tumour sites allows the bifidobacterium to exist in higher concentrations.