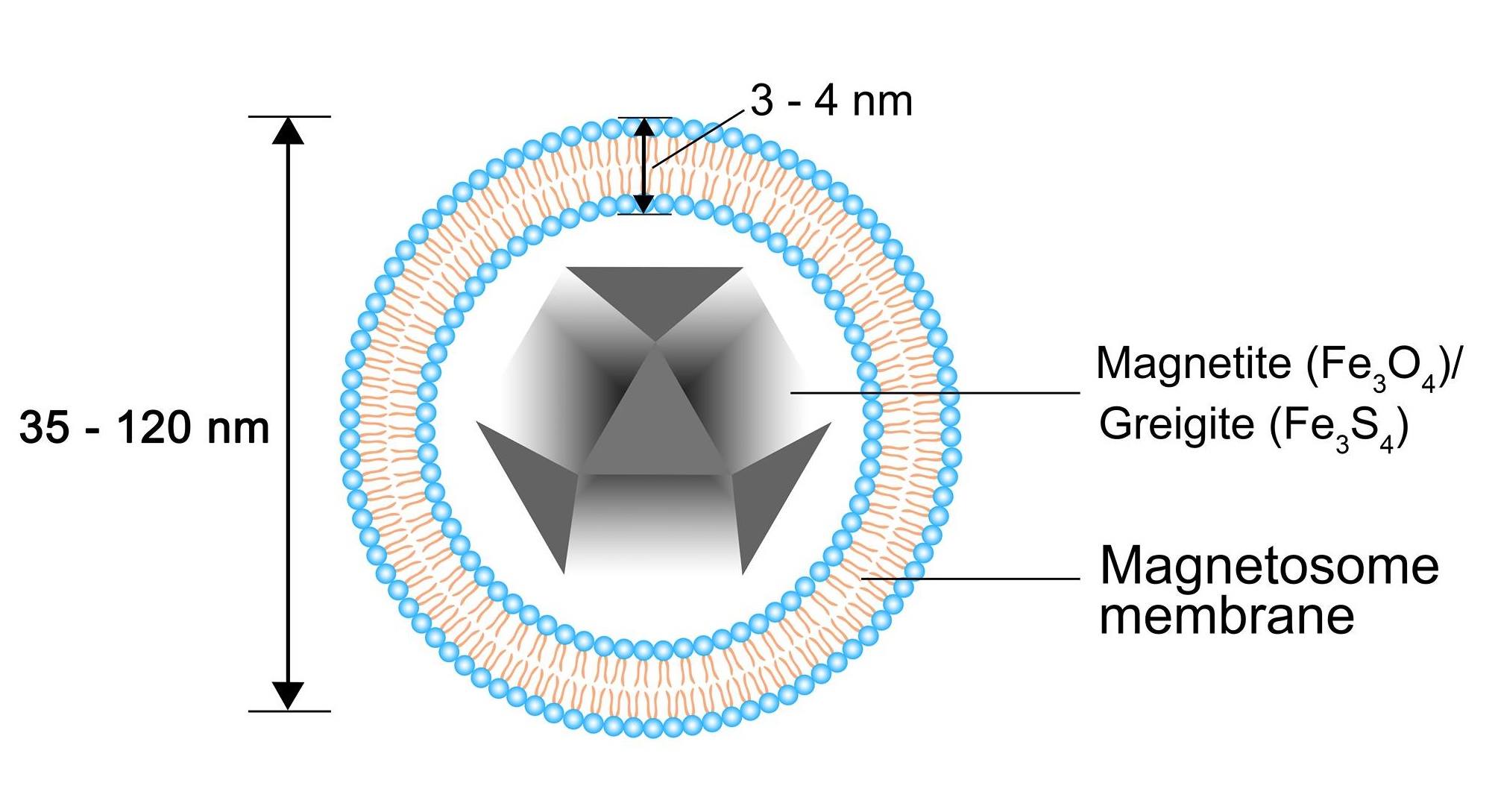 Magnetosome is a kind of rare intracellular membrane-bound structure in a specific type of prokaryotes, of nano-size ranging about 35 - 120 nm. They comprise of a magnetic mineral crystal encapsulated by a lipid bilayer about 3 – 4 nm thick (Figure 1) [1], which might be utilized in various applications involving magnetic field.

The magnetosome membrane is highly significant for its biogenesis as it creates an isolated environment within the cell crucial for mineral crystal nucleation and growth [2]. These inorganic crystals are magnetic in nature (hence its name), which compose of either magnetite (Fe3O4) or greigite (Fe3S4). The magnetosomes usually arrange in one or multiple chains along the cell axis. Different varieties of crystal morphologies such as cubo-octahedral, elongated hexagonal prismatic, and bullet-shaped morphologies were discovered in different magnetotactic bacteria [1]. 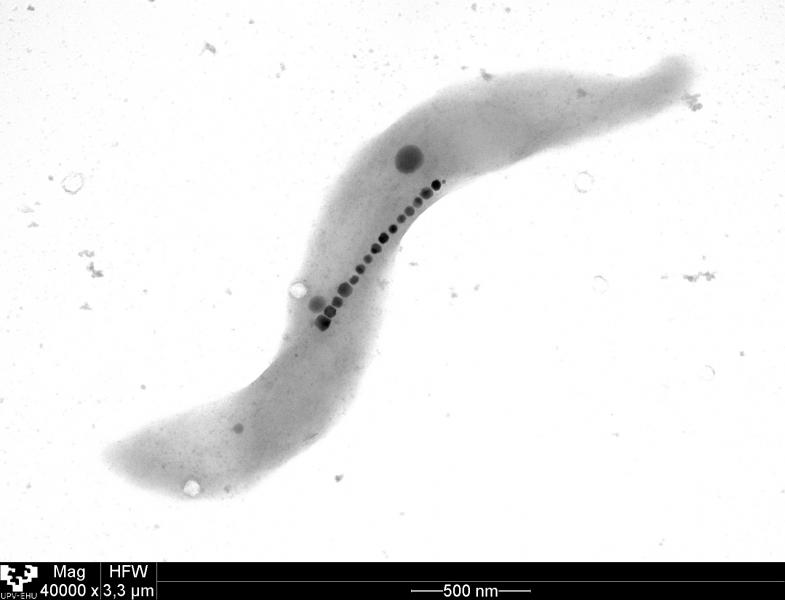 Magnetosomes are organelles synthesized by magnetotactic bacteria for its movement along magnetic field. These magnetotactic bacteria are mobile, aquatic, gram-negative prokaryotes [3] with an array of cellular morphologies, including coccoid, rod-shaped, vibrioid, helical or even multi-cellular. Some of them are more extensively studied, including Magnetospirillum magnetotacticum and Magnetospirillum gryphiswaldense. They are found optimally grown at the oxic-anoxic interface in aquatic habitats, and in fact grow less happily under atmospheric oxygen concentration.

Magnetosomes form a chain and are aligned along the axis within the bacteria. With these magnetosomes inside them, they are able to align passively to the earth’s magnetic field so as to swim along geomagnetic field lines. This behaviour is called magnetotaxis and is beneficial to their survival by aiding them to reach regions of optimal oxygen concentrations at minimal energy cost [4].

Azotobacter vinelandii - What and Why?

Although magnetotactic bacteria produces magnetosomes, these bacteria are notorious for the difficulty to cultivate owing to their micro-aerophilic nature. Elaborate growth techniques are required, and they are difficult to grow on the surface of agar plates, introducing problems in mutant screening [5].

The lack of effective methods of DNA transfer in these microorganisms is a challenge too. Luckily, the situation is improving due to better technologies recently and some of the genes from M. magnetotacticum were confirmed functionally expressed in Escherichia coli, a common lab bacteria strain. This shows that the transcriptional and translational elements of the two microorganisms are compatible. With such good news, a number of previous iGEM teams including Kyoto-2014, OCU-China-2013, Washington-2011 and UNIK_Copenhagen-2013 have been working with transferring the magnetosome-related genes to E. coli. Some exciting results about the formation of magnetosome membrane in E. coli (by the Kyoto-2014 team) has been reported, however, never the whole magnetosome. 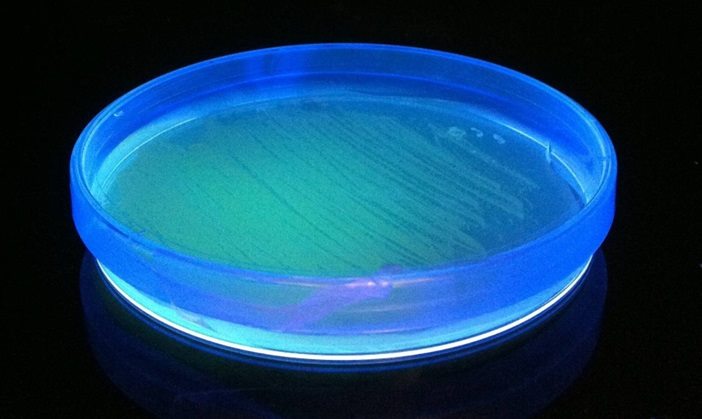 We wonder why magnetosomes seem so hard to be formed in E. coli. And then, we come up with a hypothesis - the formation of magnetosome requires a micro-aerobic or anaerobic environment as the magnetotatic bacteria are all living micro-aerobically.

Therefore, we chose a new bacteria to work on our magnetosome project - Azotobacter vinelandii.

A. vinelandii is gram-negative diazotroph (nitrogen-fixing microorganism). It is a soil bacterium related to the Pseudomonas genus that fixes nitrogen under aerobic conditions while having enzymatic mechanisms protecting its oxygen-sensitive nitrogenase from oxidative damage. This finding shows that A. vinelandii could be an excellent host for the production and characterization of oxygen-sensitive proteins or organelles in our case [6].

With the biggest advantage of using Azotobacter that it being an aerobe providing an intracellular anaerobic environment, we can grow it easily in normal lab conditions without expensive equipments, while fulfilling the formation criteria for magnetosome. Besides, most parts in registry are compatible in Azotobacter and it is of safety level group 1. One more important thing is that it can conduct homologous recombination for stable genome integration, which is a critical process we need in our project.

For the synthesis of magnetosome, it is strictly controlled by a group of genes clustered in the magnetosome island (MAI). MAI comprise of four operons, namely mms6, mamGFDC, mamAB and mamXY operons [5]. The actual size and organisation of the MAI might differ between species, but the operons seems to be highly conserved within the MAI [2].

Through genetic mutants, researches has shown with the deletion of mamAB operon would lead to non-magnetic phenotype, showing the importance of mamAB operon as minimal requirement for magnetosome formation and other important functions such as membrane invagination, iron transport, and magnetite biomineralization [7].

Now let's look at the biosynthesis of magnetosomes as a multistep complex process. 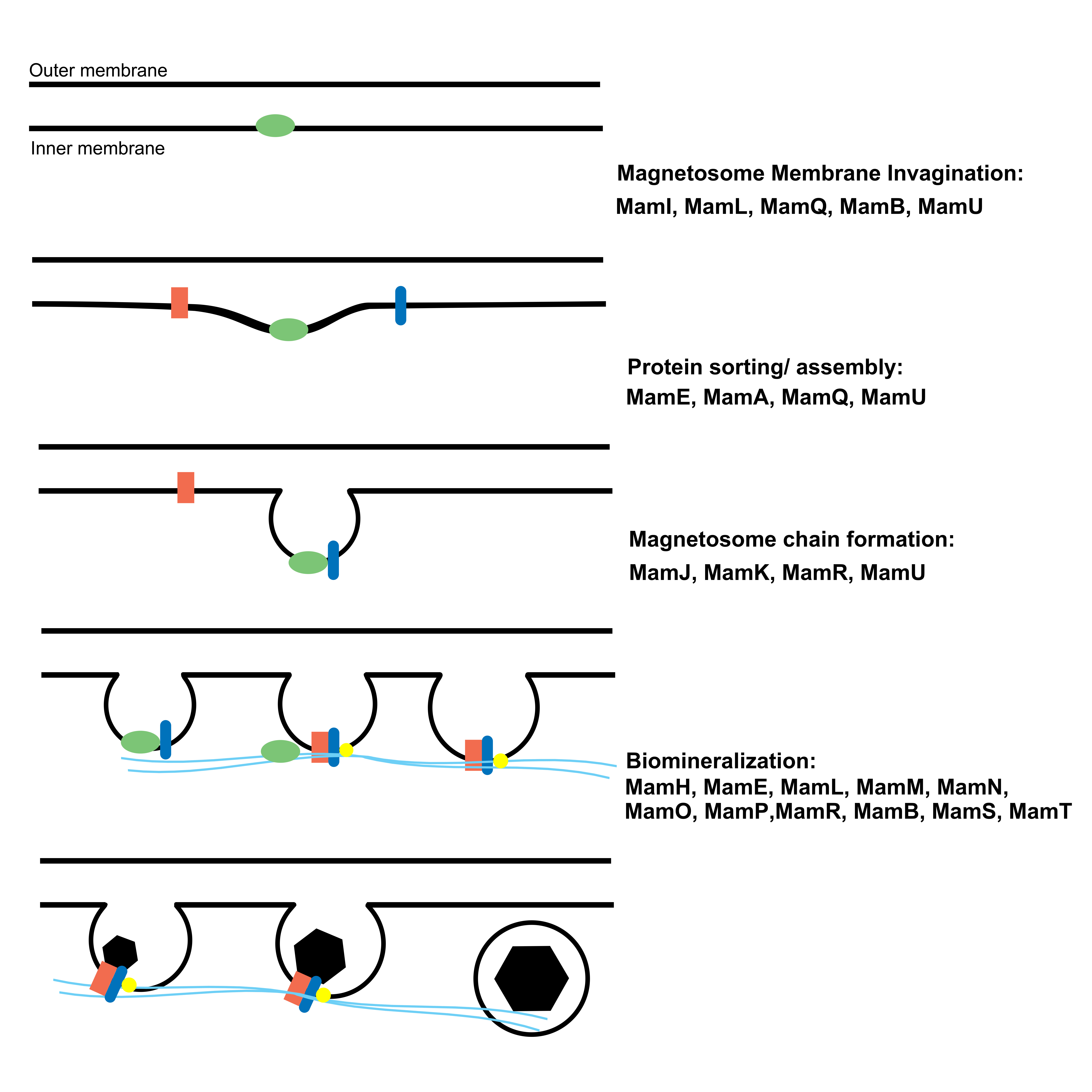 First, the inner membrane of the bacteria swells outwards for vesicle invaginations. The following step is to sort magnetosome proteins to the mangetosome membrane (MM) to perform specific functions in the transport and accumulation of iron.

After protein sorting to the MM, the next step is iron uptake. The need to import iron for magnetite production makes MTB differs from other bio-mineralizers. Iron transporters in the MM would pump Fe2+/Fe3+ into the vesicle.

Additionally, mamM, mamB, and mamH were suggested as additional iron transporters for magnetite biomineralization. As the concentration of iron ions increases inside the vesicle, biomineralization occurs [8].

The process of magnetite biomineralization is tightly regulated through specific conditions such as: pH and the concentration of iron within the vesicle. It was also shown that such formation only occurs below a threshold value of 10 mbar of atmospheric pressure, and is inhibited at higher oxygen concentrations. In other words, the size of particles is limited by atmospheric pressure and oxygen concentration. It is found that at 0.25 mbar, magnetite biomineralization can produce particles up to 42 nm. As the condition rise to 10 mbar, the particle size dropped to about 20 nm. [9] As the biomineralization of the magnetosome is reported to be highly affected by oxygen, we propose an educated guess that magnetosome will have a higher probability to be successfully formed in our bacteria Azotobacter rather than E. coli due to its intracellular microaerobic characteristic.