Yogurt can easily get bacteria contamination when improperly stored. We generally cannot determine whether a cup of yogurt is safe for eating just through checking its appearance, so we asked this question: can we make spoiled yogurt look different? 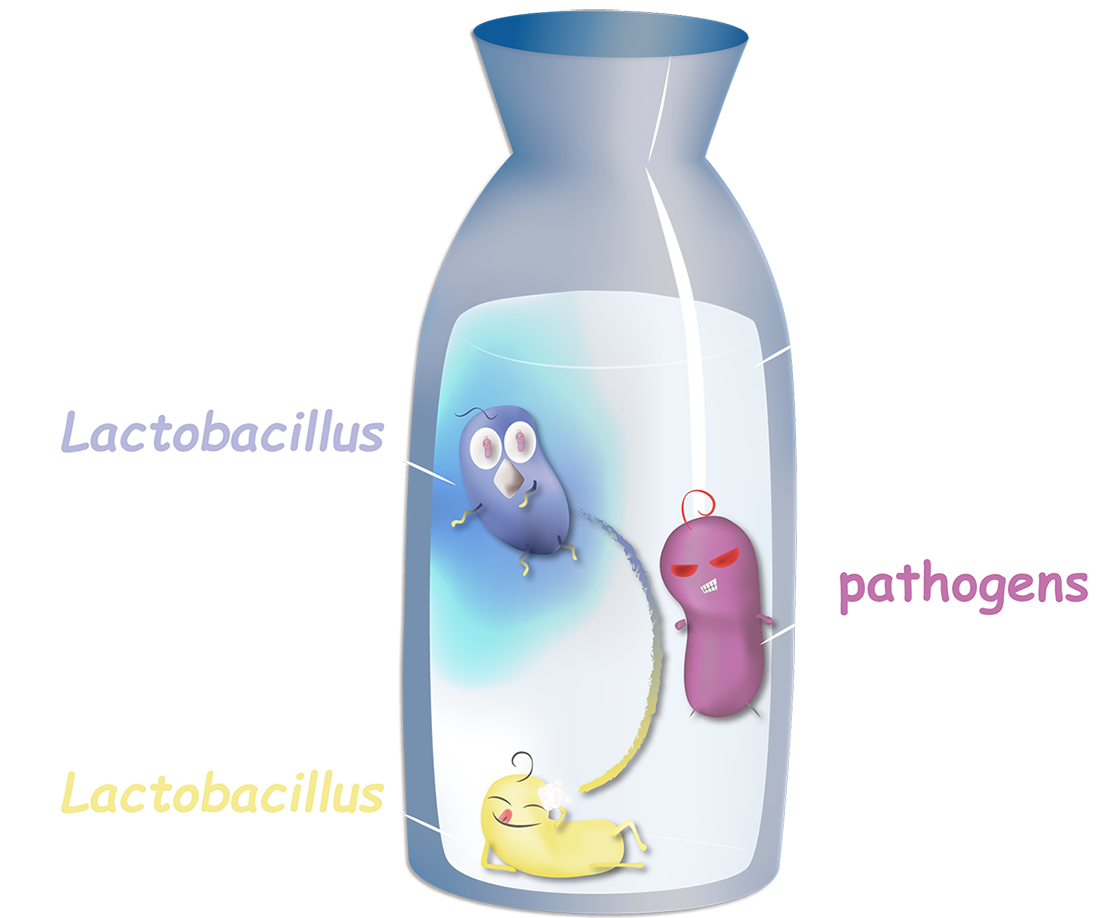 This year, the iGEM team of NEFU_China aims at creating a novel and handy method for the detection of pathogens in yogurt. Autoinducer 2 (AI-2), a signal molecule constantly produced by pathogens in yogurt, serves as the key in our project. We cloned genes related to the AI-2 responsive pathway in Salmonella typhimurium​ and integrated them into the genome of Lactobacillus bulgaricus. Our engineered Lactobacillus will be able to uptake AI-2 molecules from pathogens and trigger the expression of a report gene that produces a blue pigment. Since our engineered Lactobacillus can act as an auxiliary starter in yogurt fermentation, the detecting process can be greatly simplified. If you open a cup of yogurt and find it has already turned blue, you can just trash it.

As one type of the oldest fermented food, yogurt is very popular around the world. Different from other traditional dairy products (cottage cheese, sour cream and etc.), yogurt wins its popularity due to the health benefits it can offer. Primarily, yogurt comes from milk and is nutritionally rich in protein, calcium, riboflavin, vitamin B6 and vitamin B16. Additionally, Lactose-sensitive individuals may tolerate yogurt better than other dairy products due to the conversion of lactose to glucose and galactose, and the fermentation of lactose to lactic acid carried out by the bacteria in the yogurt. Most importantly, it generally possesses a certain amount of probiotics, which is necessary in our digestive tracts.

In spite of these health benefits, yogurt is easy to go bad and spoiled yogurt has more harm than good. Last semester, one of our teammates was absent for class due to eating some spoiled yogurt, although it was still within the expiration date. Generally, yogurt within expiration date is safe for eating if it is always kept cold, which was neglected by this teammate who consequently suffered from diarrhea. As you can see, yogurt may cause food poisoning even though it has not expired. This is one of the reasons why we came up with an idea of developing a yogurt guarder.

We searched the Internet for relevant information and found varieties of news about yogurt spoilage within shelf-life. Bacteria contamination in yogurt cannot be recognized by our naked eyes. Thus, many people may suffer from that.

To understand why yogurt may not be safe for eating even before the expiration date, we need to know how yogurt is produced. First, raw milk is treated with pasteurization to kill most microorganisms inside without destroying its nutritional components. Second, Lactobacillus is inoculated for fermentation. Then, yogurt is made. Unlike sterilization, pasteurization is unable to kill all microorganisms in the food. Instead, it intends to reduce the number of pathogens without significantly affecting nutrient. So yogurt must be kept in cold for a limited time period; otherwise pathogenic bacteria that survive from pasteurization can quickly grow and cause yogurt spoilage.

We did a simple experiment to test the appearance and contents of yogurt under different conditions. We bought fresh yogurt from the same batch and kept some of them in fridge and some at 35℃ for half an hour. Then, we took pictures of them. The yogurt kept at both conditions looked the same. However, our subsequent experiments revealed that yogurt kept at 35℃ had a higher number of coliform bacteria than that from the fridge and the pathogens significantly exceeded the qualify standard. This means the pathogen contents of yogurt may significantly increase when we carrying yogurt from a supermarket to home, since yogurt will be exposed to ambient temperature for a while, especially in summer. (Visit Result for more details) 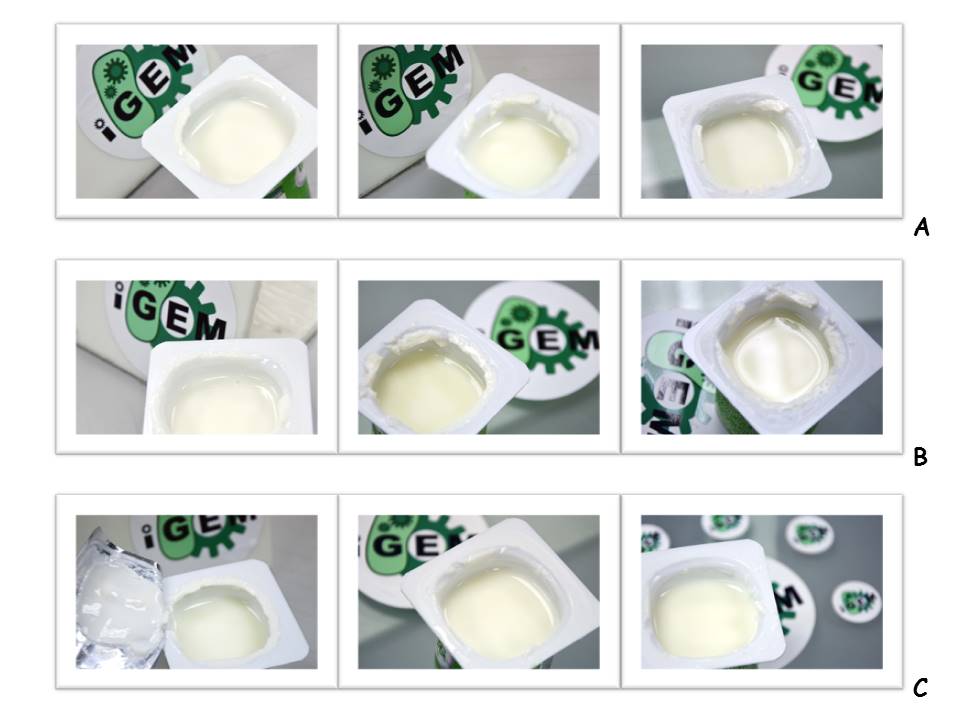 Needless to say, no one would like to eat yogurt if he or she knows it may contain such a high amount of coliform. However, the current methods to test pathogenic bacteria generally contain multiple cumbersome steps, are time consuming and require special equipment. They obviously cannot be used in our daily life. Therefore, a handy detecting approach for pathogenic bacteria in yogurt is urgently needed.

The major pathogens in spoiled yogurt include E. coli, Salmonella and Bacillus. If we can find a common feature among these bacteria, we may develop a method to detect them simultaneously. We searched literatures and discovered that a signal molecule, autoinducer 2 that is a signaling molecule in quorum sensing, is common among these pathogenic bacteria.

Quorum sensing is a process of bacterial cell-to-cell communication involving the production and detection of extracellular signaling molecules called autoinducers. As the density of the bacterial population increases, so does the amount of secreted autoinducer molecules. When the concentration of the autoinducer reaches a critical threshold, it will be  transported back into the cell and  will activate or repress certain target genes. While most autoinducers are species specific, autoinducer 2(AI-2) is generated by many Gram-positive and Gram-negative bacteria and serves as a 'universal signal' for interspecies communication.

AI-2 is a byproduct of the Activated Methyl Cycle, which recycles S-Adenosyl-L-Methionine (SAM). As a main methyl donor in eubacteria, archeabacteria and eukaryotes, SAM is converted to S-Adenosyl-L-Homocysteine (SAH), which is subsequently detoxified by the Pfs enzyme (also called S-Adenosylhomocysteine Nucleosidase) to generate Adenine and S-Ribosyl-Homocysteine(SRH), the sole intracellular source of the substrate of LuxS. LuxS then produces the precursor of AI-2, 4,5-Dihydroxy-2,3-Pentanedione(DPD), during the conversion of SRH to Homocysteine (HCY). 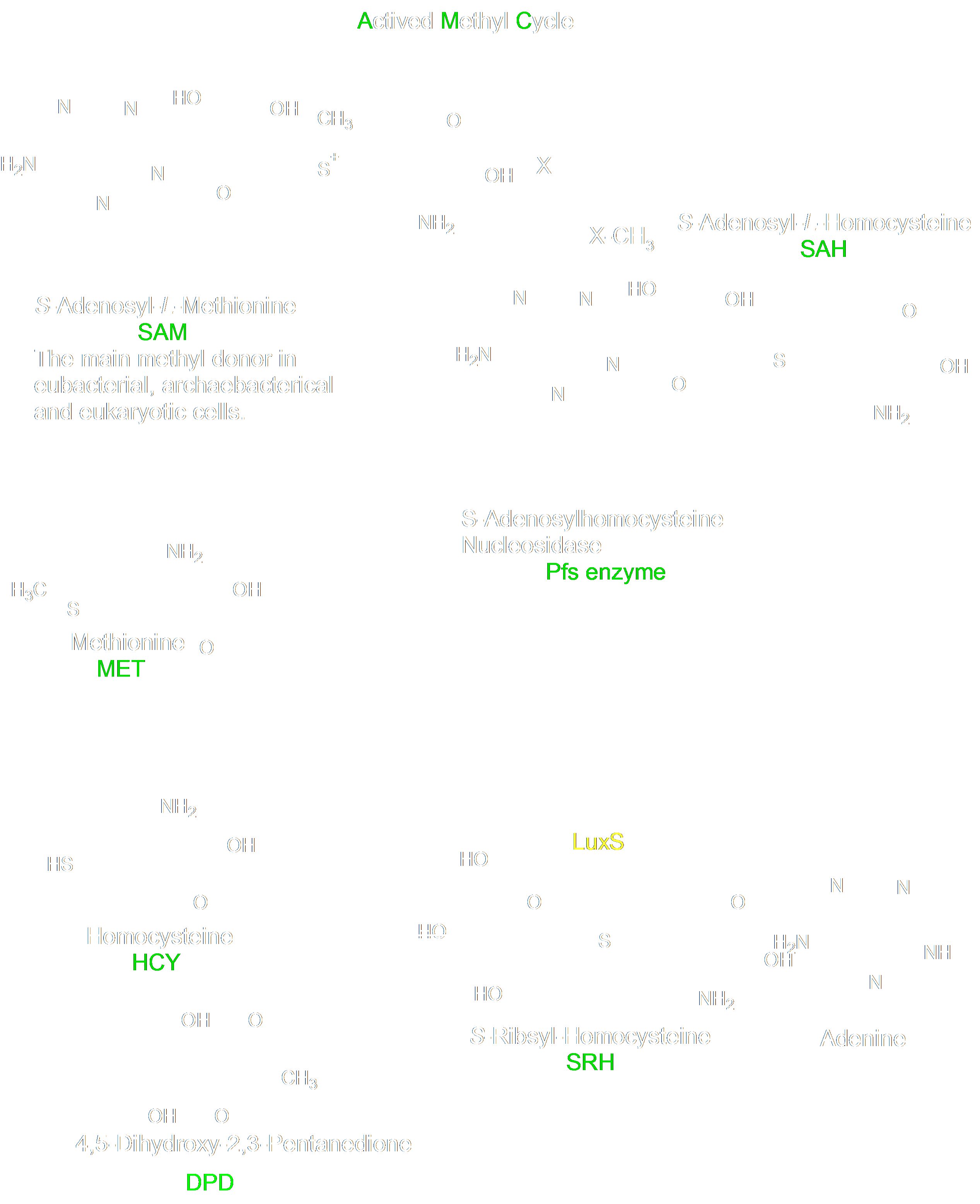 DPD can be converted from SRH by LuxS in the cytoplasm and then exported to culture medium, where DPD undergoes spontaneous cyclization to form AI-2. Depending on the bacteria, response to AI-2 can follow one of the two currently identified routes. In pathogens exemplified by Salmonella, AI-2 response involves ATP binding cassette transporter encoded by four LuxS-regulated (lsr) genes. lsrB encodes the periplasmic AI-2 binding protein, lsrC and lsrD encode two membrane channel proteins, and lsrA encodes the ATPase that provides energy for AI-2 transport. The extracellular AI-2 can bind LsrB to re-enter the cytoplasm and be phosphorylated by LsrK. Then the phosphorylated AI-2 can activate the lsr operon through binding the repressor protein LsrR and release it from the promoter. This will lead to the synthesis of LsrA,C,B, D and increase AI-2 entry. 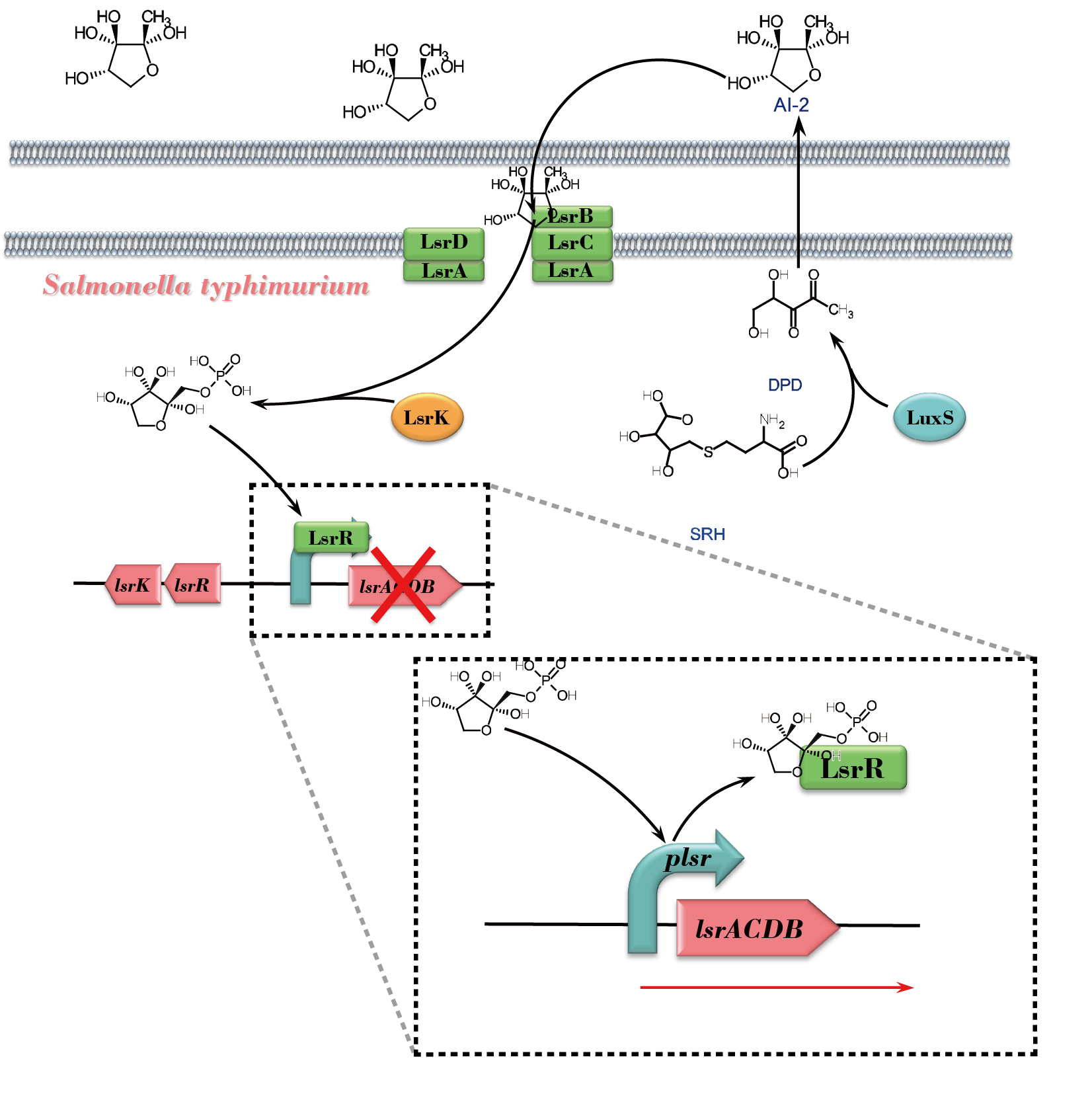 We cloned genes related to the AI-2 response in Salmonella and integrated these genes in Lactobacillus genomes. In our engineered bacteria, the lsrA, C, B, D genes will constitutively express to form the membrane transporter. We will clone the promoter sequence of the lsr operon and use it to drive the expression of the report gene. According to the previous studies, we have chosen an identified pigment in the Registry: the biobrick of amilCP (BBa_K592009). It encodes a blue pigment that can be recognized by naked eyes. Thus, when pathogenic bacteria express AI-2 molecules and secrete them extracellularly, these molecules can be transported into our engineered bacteria and trigger the expression of the report gene to produce the blue pigment. 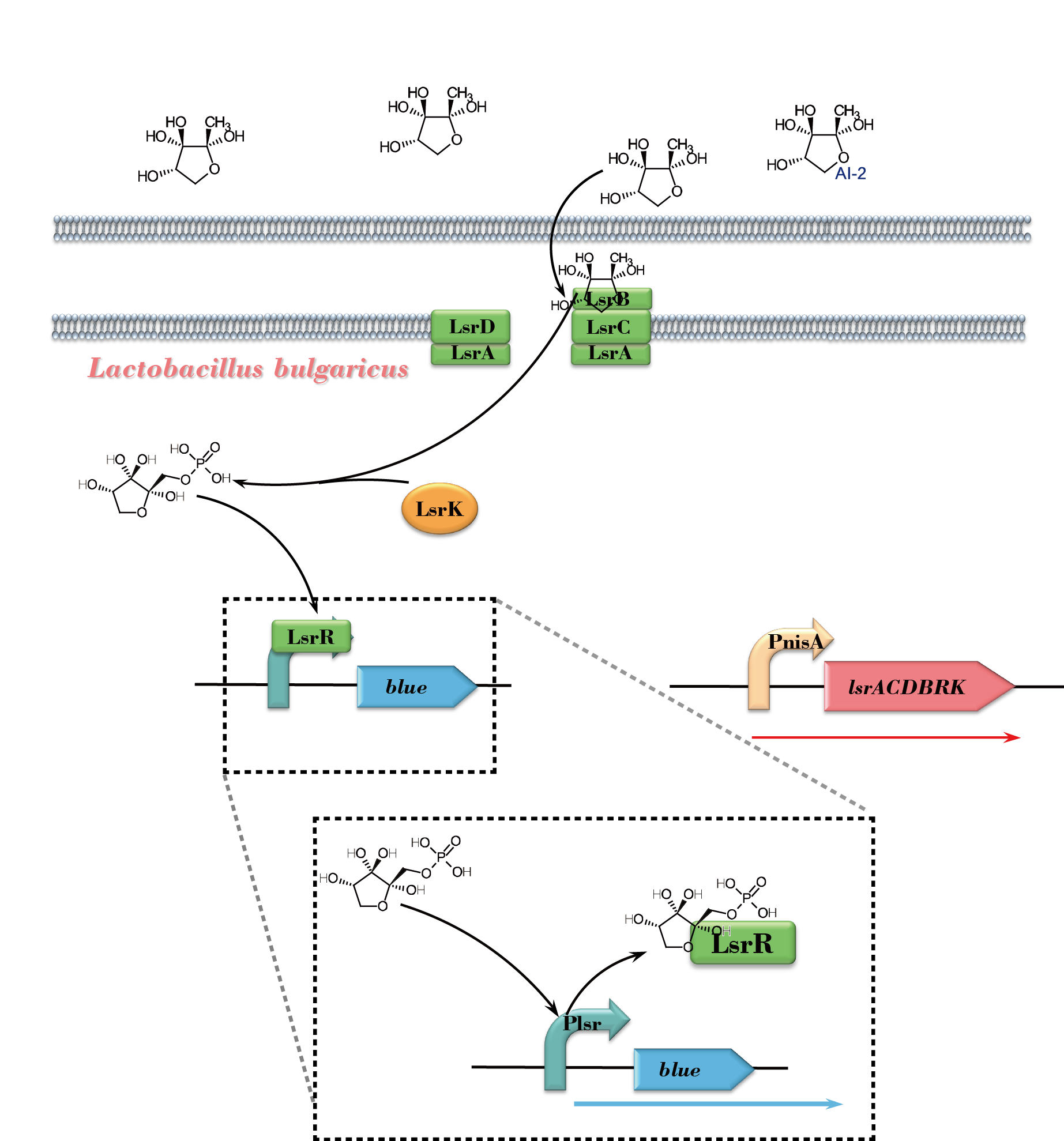 In our design, the PnisA promoters, which can be activated by nisin, are used to drive the expression of lsrA, C, B, D, R and K genes. Nisin is a anti-microbial peptide consisting of 34 amino acids. Because of its broad host spectrum, it is widely used as a food preservative.

The nisin-controlled gene expression (NICE) system is one of the most commonly used regulatory gene expression system of Gram-positive bacteria. In the natural situation, nisin binds to the receptor NisK, which activates NisR through phosphorylation. The activated NisR drives the nisA promoter. Sub-toxic amounts of nisin in the ng/mL range are sufficient to fully activate the otherwise tightly repressed promoter. 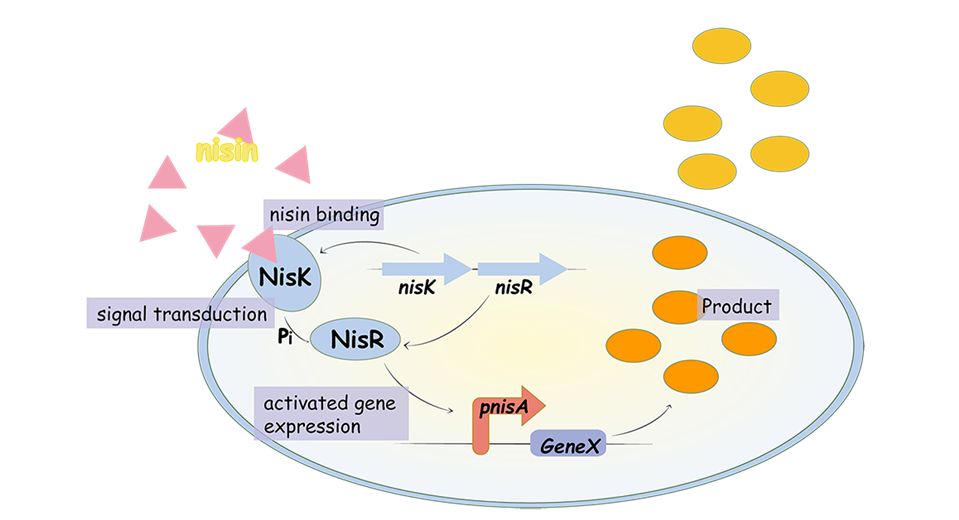 Previous studies indicate that the nisR and K are the only nis genes required for nisin-mediated signal transduction and PnisA promoter activation. However, our chassis, Lactobacillus bulgaricus Lb14, does not have nisR or nisK genes in its genome. In order to implement this strictly controlled expression system in such lactic acid bacteria, various nisR and K expression constructs were generated, and we picked pNZ9530 among them. Thus, apart from the plasmids for the expression of the essential parts in charge of AI-2 response, we also need to transform pNZ9530 into our engineered Lactobacillus.

This system for regulated gene expression shows many desirable characteristics: (1) nisin is an ideal molecule to be used as an inducer since it is already widely used in the food industry and can therefore be regarded as a food-grade inducer; (2) the protein expression levels are very high in this system; (3) the expression of the intergrated genes appears to be very tightly controlled, leading to undetectable protein expression in the uninduced state. So once our engineered bacteria are consumed as auxiliary starters in the yogurt fermentation, they will not express these genes modulated by PnisA, since the inducer nisin has been destroyed during digestion.

We have carefully considered the functions of these genes involved in AI-2 response, antibiotic resistance of expression vectors and plasmid incompatibility before transformation. In order to achieve the final goal of constructing the AI-2 response pathway of Salmonella in our engineered bacteria, we chose 3 types of plasmids with different replication origins and different antibiotics so that they can replicate in one host cell and provide convenience for screening post transformation. To visualize AI-2 existence, we chose a reporter gene, amilCP (BBa_K592009), from previous registered parts. This adds up to 7 plasmids for essential parts of AI-2 response system: (1) pNZ8148 is used to express lsrB, R and K; (2) pBBR1MCS-5 is used to express lsrA, C and D; (3) pHY300PLK is used to express the blue pigment, which is under the control of Plsr. We linearized these expression vectors and proceeded to stably integrating them into the genome of the host bacteria.

We chose pNZ8148 for the expression of those three genes. The replicon of the vector pNZ8148 is originally from the Lactococcus lactis plasmid pSH71. However, this replicon has a broad host range. Apart from Gram-positive bacteria, pNZ8148 can also replicate in E. coli, but require a recA+ strain like MC1061. It is chlorampenicol resistant. 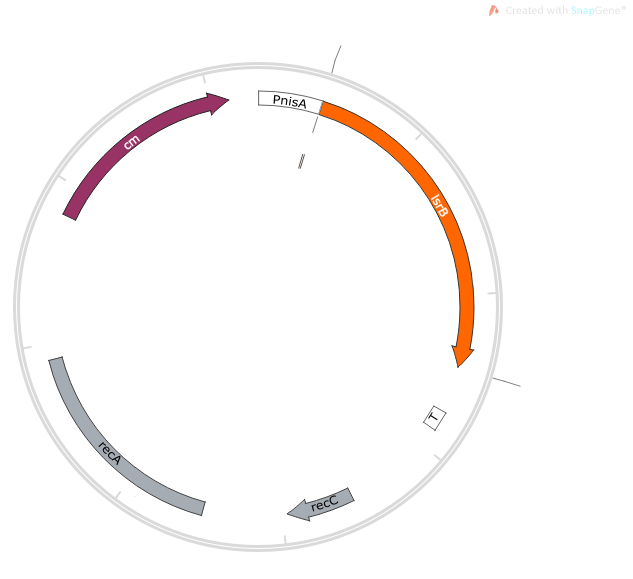 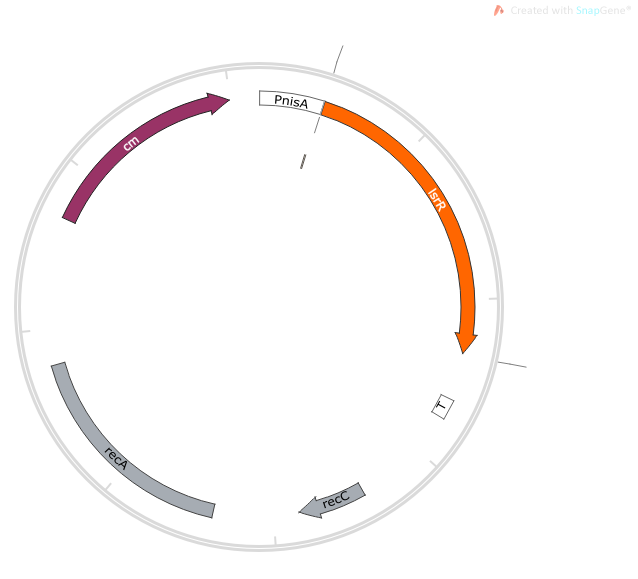 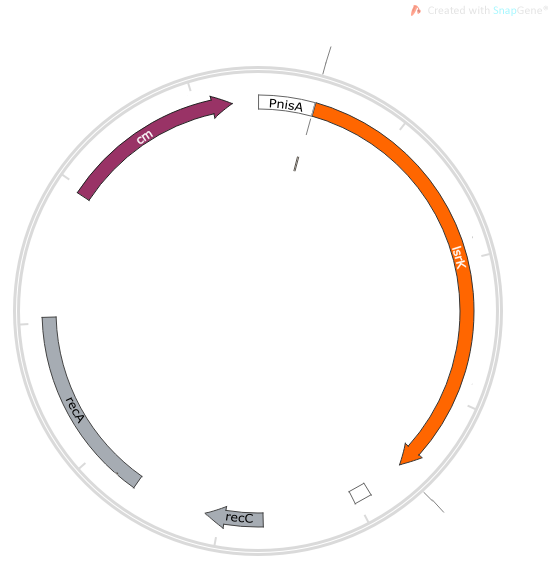 Those three coding sequences were first inserted in pNZ8148. Afterwards, we used PCR to isolate them together with the upstream nisA promoters. And then we used double digestion and ligation to pBBR1MCS-5 to construct those three vectors. 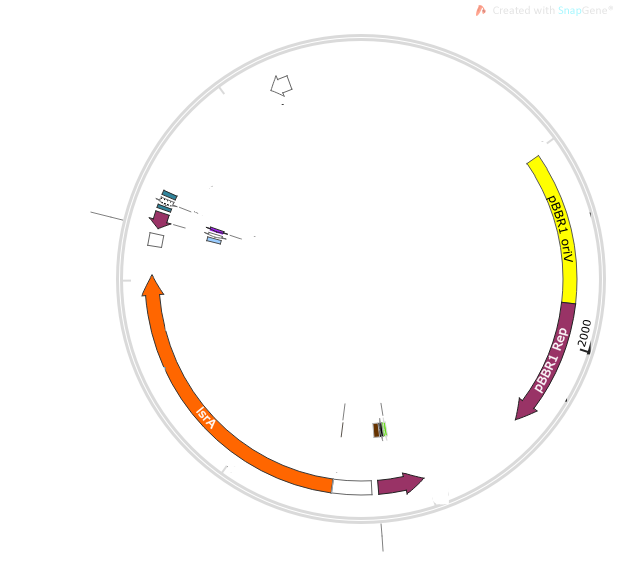 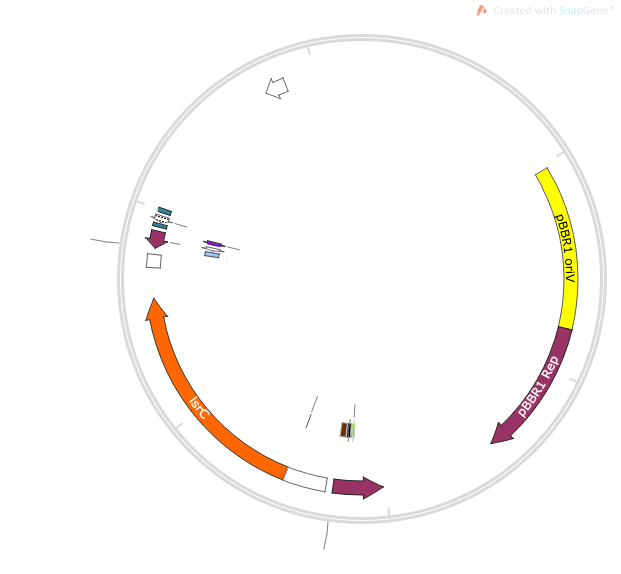 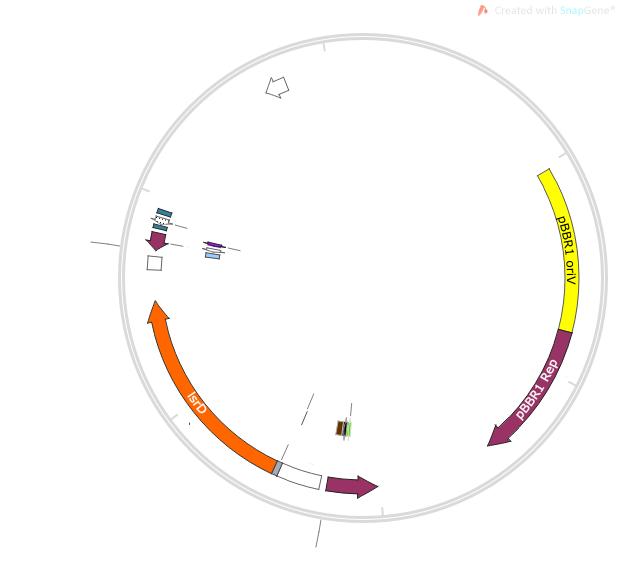 First, we isolated the promoter sequence of the plsr operon from the genomic DNA of Salmonella. Second, we isolated the coding sequence of amilCP together with the terminator from pET-14b, which was constructed by our iGEM team last year. After that, we spliced these two parts using SOE-PCR. Finally, the product was inserted to pHY300PLK using double digestion and ligation. 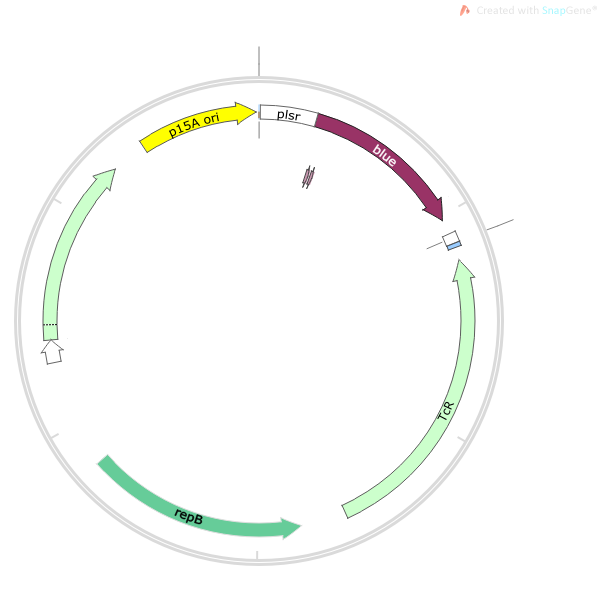