"Dr. George D. Yancopoulos, chief scientific officer of Regeneron, said the crisis had pointed up shortcomings in biodefense. “Nobody is really prepared,” he said. “Nobody in the world has rapid response capabilities.”—New York Times, January 2015

Humans need improved methods for making therapeutic antibodies. Producing these complex proteins is hard but important; the 2014 Ebola Outbreak illustrates the urgency. In response, we propose the use of microalgae as a widescale antibody production platform. Microalgae have all the benefits of higher-level plants but scale faster and are easier to process. Furthermore, from a holistic point of view, microalgae are an ideal chassis; their primary carbon source is CO2 and they are unlikely to harbor mammalian pathogens.

Epidemic spread modeling by Brockmann's group at Humbolt University. (http://rocs.hu-berlin.de/). This model shows the spread of a theoretical outbreak of a particularly contagious pathogen in Atlanta, GA. The spread is over 60 days.


With the most recent Ebola Outbreak, over 28 thousand were infected by the deadly pathogen and an estimated 11 thousand died. Meanwhile, a potent anti-Ebola antibody cocktail, ZMapp, was going through preclinical studies. In a study where 18 heavily Ebola infected monkeys were treated with ZMapp, all 18 survived, including several in the hemorrhaging stage of the disease. Given the timing and urgent need, ZMapp was approved for use in humans.[1]

Antibodies are unique and powerful tools for eliminating pathogens. Unfortunately, ZMapp’s utility was hindered by lack of supply, not an apparent inability to neutralize the virus (as illustrated by the Rhesus model). Only 7 doses were available throughout the Ebola Outbreak despite infection rates in the thousands. Ultimately, it represents an absence of rapid antibody production capabilities.

A proposed solution was the tobacco plant. A relatively well-understood and engineered organism, it was the method for making ZMapp. Producers agrobacterium containing the DNA for the therapeutic antibody into the plant leaves by vacuum infiltration. The plants grow and the antibody is purified from the plant cell lysate. In theory, this is a quick and inexpensive method for rapidly producing lots of antibody, dependent upon arable land rather than high-sterility CHO vats. [2] In practice, it is not.

It might one day be possible to make drugs entirely without cells. Protein-producing gels or other systems could produce drugs economically in vitro avoiding the inherent biological complexity and metabolic needs of living organisms. [3, 4]

It might, alternatively, be possible to inject the mRNA of a desired antibody directly, thereby offloading the antibody production to the patient rather than delivering a bolus of externally produced antibody. Moderna, for example, has developed synthetic mRNA that codes for polypeptides while avoiding immune-surveillance (and therefore elimination). It’s currently unclear how this mRNA will be targeted to delivery into B cells, and for how long the B cells will continue to produce antibodies. This approach, offloading manufacturing of antibodies to the patient, has been extensively researched in the context of AIDS. [5, 6, 7]

In might be possible to design synthetic bacteria (like Synlogic) for the gut that produce Nanobodies (small enough to be produced in bacteria and lacking complex di-sulfide bonds). These pathogen targeting nanobodies might prove capable of reaching the circulatory system after being turned on by an exogenous transcription factor, however, these nanobodies might still face the complication of improper glycosylation and immune clearance. [8]

Despite the volume of researchers working on futuristic solutions, recombinant antibodies are known to work. They are less theoretical and more a problem of logistics. And logistically, antibodies from Chinese hamster ovary cells or tobacco plants never materialized during the 2014 Ebola Outbreak. So the question becomes: can microalgae produce properly folded antibodies at a high enough concentration and at a cheap enough cost to warrant their use as a widescale antibody production platform? Given the need and potential benefits, we believe it warrants additional research.

Within each of us (health and medication depending) is an adaptive immune system. A major cell in this system is the B Cell. An immunocompetent B cell is covered in B cell receptors (BCRs). These BCRs respond to non-self antigens. When a foreign antigen binds to a BCR, it activates the B cell to turn into a plasma B cell, dedicated to producing specific antibodies against the antigen that triggered its response.

Some of the plasma B cells enter secondary lymphoid organs, otherwise known as “germinal centers.” Here, B cells undergo rapid mutation so that the selected-for plasma B cell population produces higher affinity antibodies. The resulting plasma B cells begin leave the germinal center to pump out high levels of antibody into the bloodstream. [9]

This is what the human species lacks with macro-level infrastructure. Hospitals and care-centers act as an innate response, responding in the emergence of a contagion to quarantine the sick and provide nourishment. They are not designed with the capability to rapidly adapt and attack the pathogen. Drugs for human treatment undergo rigorous FDA review before approval; the average inception to market timeline for an FDA approved drug is 12 years (note: this is after the drug has been developed). This is too long for rapid drug turnaround and represents a significant threat to human health. 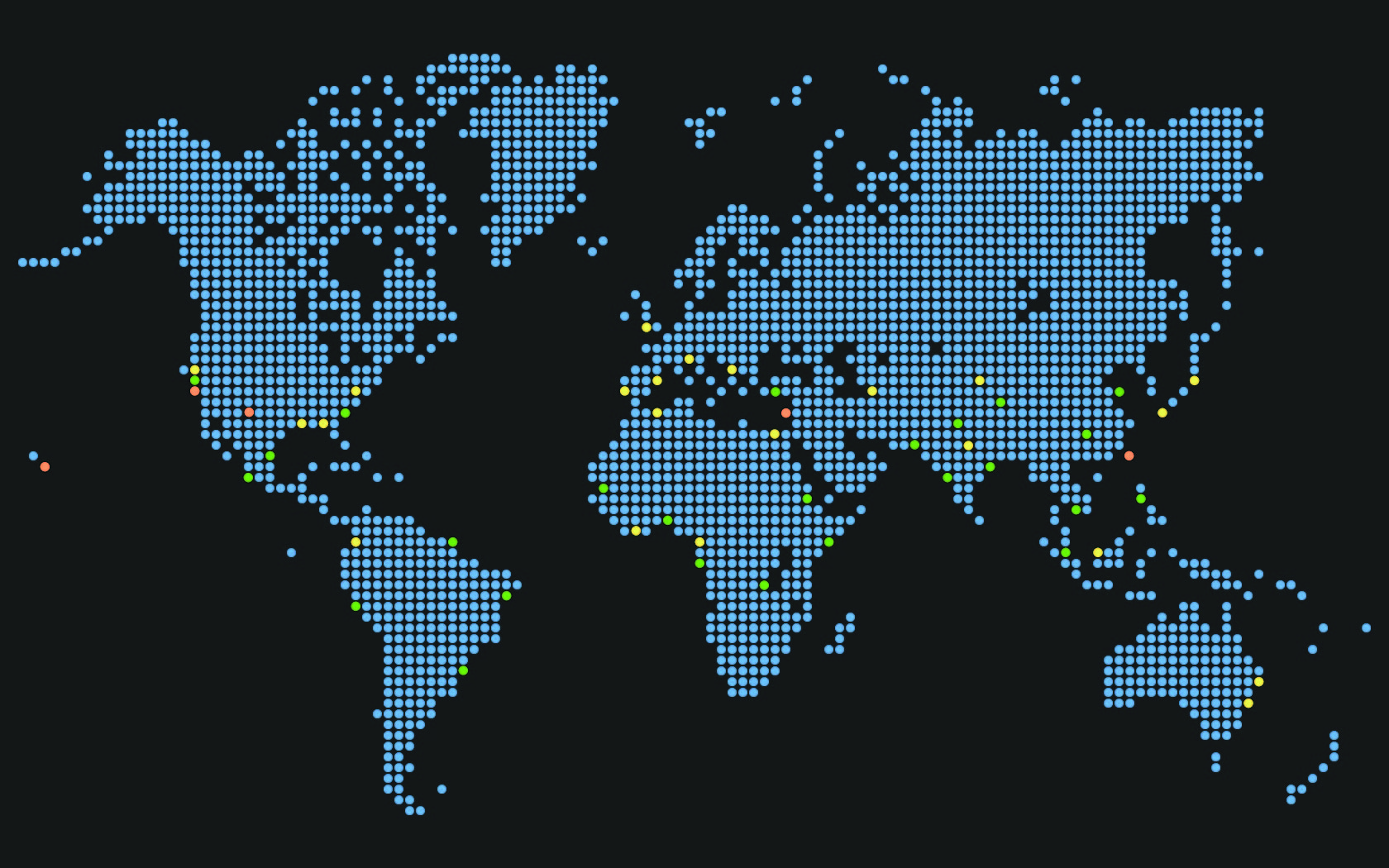 
In industrialized countries with significant carbon taxes, like the UK and Australia, microalgae facilities might become commonplace alongside power plants. Sapphire Energy, Sunomix, and Solazyme have demonstrated the market potential of microalgae products. It would be strategic to further distribute algae plants near heavily populated areas. Were a pandemic to occur, these facilities could expunge their commodity-producing microalgae and replace it with a high antibody producing strain of microalgae, like recombinant Chlamydomonas reinhardtii or Phaeodactylum tricornutum.

The true benefit of using microalgae for antibody production is the lower fixed cost of facilities. 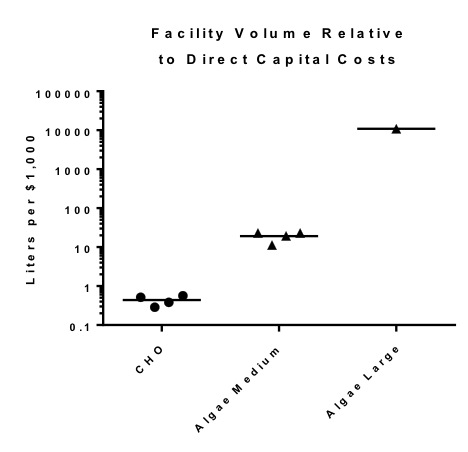 CHO facilities, on average, cost around $200M for 80,000L. A similarly sized algae facility at 15,000L would cost an estimated $1.3M. With economies of scale, algae production facilities become significantly cheaper. $1B would be a 14 Billion Liter algae farm (5,500 acres) according to one techno-economic analysis [10]. 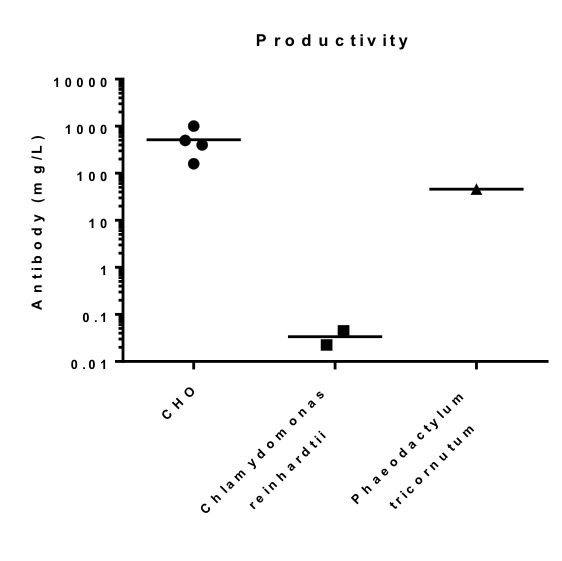 The biggest challenge for microalgae will be improved productivity. Because of fixed and variable costs, microaglae will not need to be 100% as productive as CHO's (extremely unlikely in the near-term, given the amount of research and time invested in CHO's), however, they will need to improve 1-2 magnitudes over current levels. CHOs are far and beyond the most efficient antibody producers, with some strains now exceeding grams of product per liter of culture media. Furthermore, they are entrenched in the industry: 61 of the 90 therapeutic proteins produced in mammalian cells come from CHO's (Rader, 2015. Bioprocessing Journal). Furthermore, of the 174 recombinant FDA approved drugs on the market, only one is made by plant cells (Elelyso from carrot cell culture). 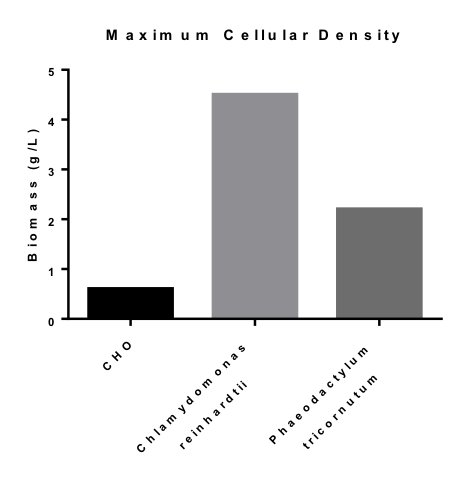 An encouraging number is maximum biomass. Microalgae can quickly reach high densities, with some culture conditions allowing biomass in excess of 10g/L. With a higher cellular density, and significantly larger scales for the same investment, microalgae may soon contend with CHO's.

Northeastern 2015 set out for the highest protein expression possible. The rationale for this approach was to counteract the typically low nuclear expression levels of heterologous proteins in C. reinhardtii. Therefore, the designed novel plasmid used pPsaD, a very strong promoter. While it was possible to make all the parts, the Gibson repeatedly failed.

We then shifted towards adaption of a plasmid from the Chlamy Collection: pOpt_mVenus. By surrounding the first promoter with the iGEM prefix and suffix, we created an iGEM compatible protein expression plasmid. In this way, teams can remove the suffix and replace it with a codon-optimized coding sequence for heterologous proteins of interest, or remove the promoter region entirely, testing alternate promoters and coding sequences upstream of a hygromycin B selection cassette.

Genetic engineering of microalgae is not new. C. reinhardtii, in particular, has been explored as a platform for heterologous proteins for years but to a far lesser extent than mammalian cells or higher-order plants. Although they're difficult to engineer, microalgae are poised to disrupt biofuel, agriculture, and pharmaceuticals. With their primary reliance on CO2 and their capacity for producing complex proteins, microalgae like C. reinhardtii represent the chassis of the future.