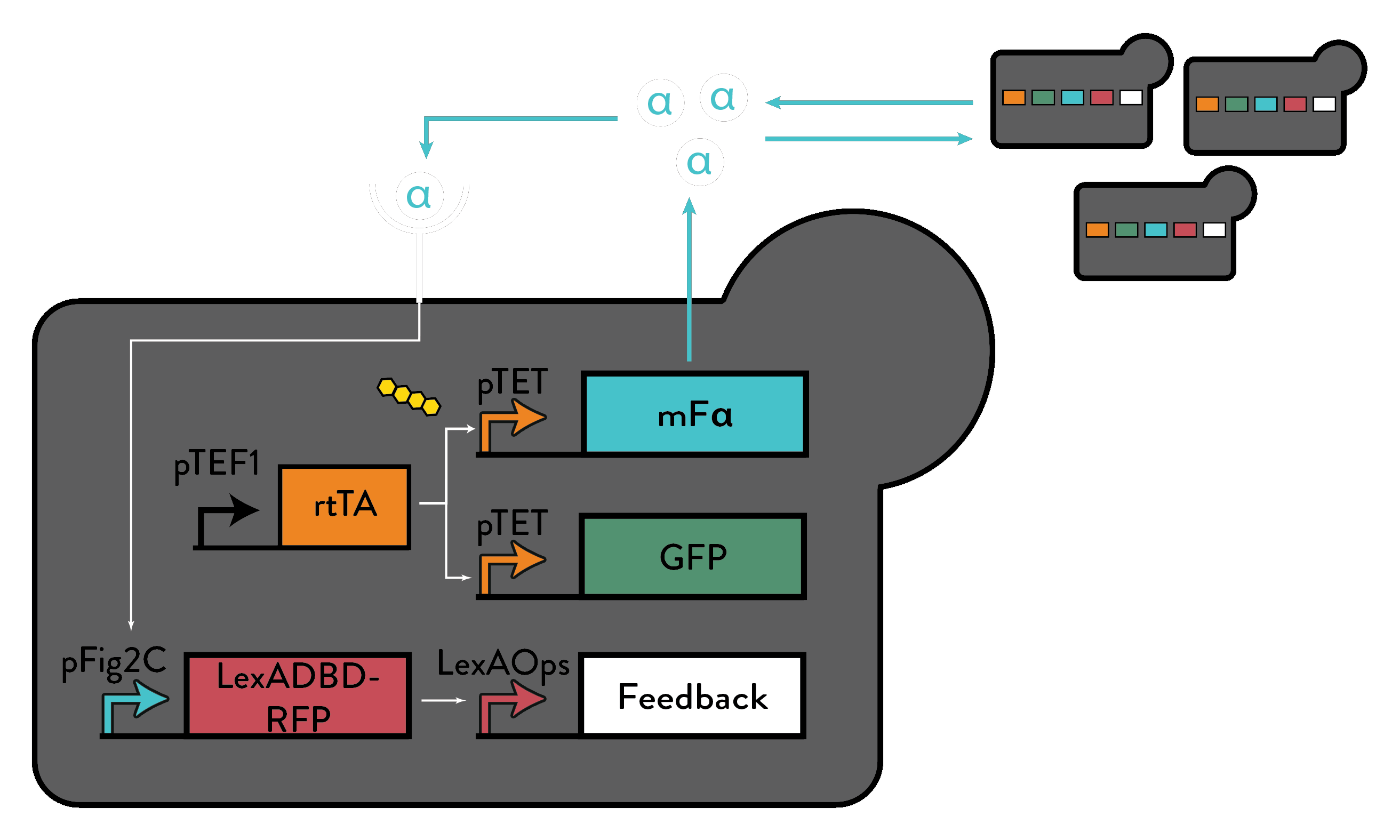 Our project this year is centered around the emergence of distinct community phenotypes when individuals in a population are allowed to communicate. Cells in a local population are able to coordinate decisions with other cells in their community through the secretion and reception of chemical signals. Through diffusion and degradation, concentration gradients of the signaling molecule are formed in the extracellular space, providing varying levels of information to neighboring cells in the community. Focusing on the community phenotype of bimodal activation, our model aims to mathematically estimate distinct states of multiple cells in the population in different immediate extracellular environments. 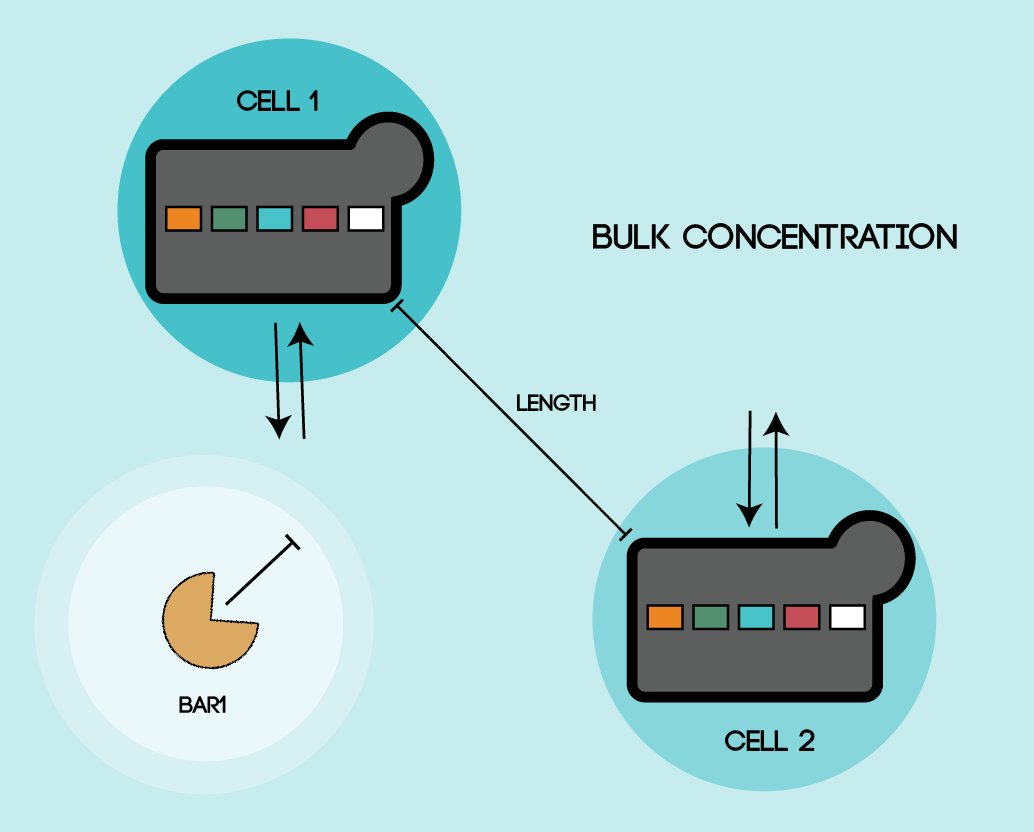 To create this model, we designed a series of 11 differential equations to predict the outcomes of tuning various communication parameters in our genetic circuit (see below). In our mathematical model, we have two genetically identical cells secreting alpha factor into a bulk pool in the extracellular space. Through diffusion between the two local concentrations and the bulk pool, we can see distinct cell fates of the two cells after changing parameters such as stimulus sensitivity, signal degradation, and distance between cells. Based on previous literature, our model assumes that basal and constitutive synthesis of proteins in our circuit is constant, natural degradation is constant relative to concentration of the protein, and that synthesis of proteins is the rate determining step, not diffusion. After setting reasonable natural parameters for our circuit, we tuned easily changeable parameters in actual experiments to see if we could observe a bimodal population of activated and quiescent cells. Parameters that we altered were:

Our 11 differential equations are made up of 5 equations describing protein concentrations in one cell, 5 equations describing protein concentrations in a different cell, and 1 equation describing signal concentration in the bulk background of the extracellular medium. Cell 1 and Cell 2 are genetically identical, with the same production and degradation coefficients for all circuit parts introduced into the cell (rtTA, Ste2, LexA, mfɑ, and GFP). Our figures focus on the community response portion of our genetic circuit: modeling the levels of GFP and RFP. We know that individual response to a stimulus (rtTA and GFP) will stay relatively similar as our cells are genetically identical and not participating in intercellular regulation. However, the genes associated with the community response will be upregulated by reception of alpha factor. We found a set of parameters that contributed to a bistable population, where Cell 1 would have a different community response than Cell 2, although genetically identical. This model helped us investigate the major factors necessary to replicate a bimodal population and most vital to community decision making. 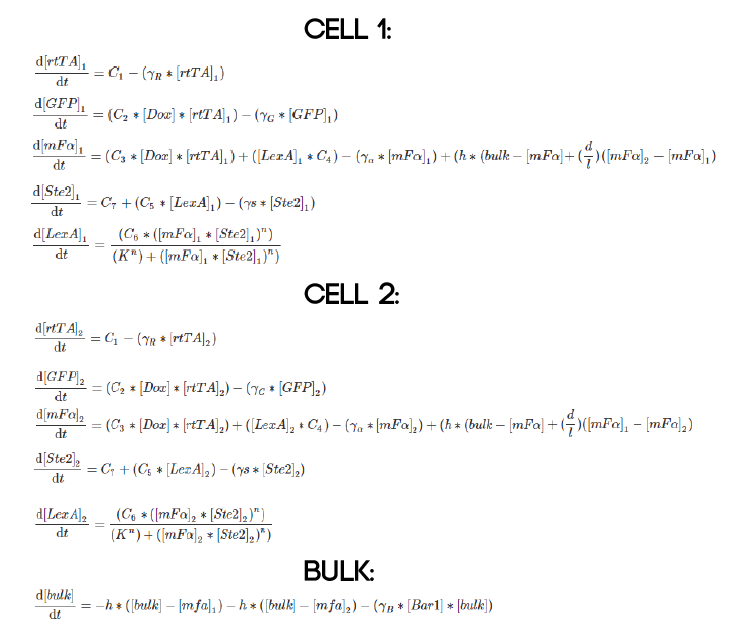 Under these conditions, the amount of alpha factor was uniformly larger in the system lacking Bar1. Consequently, the cell system containing Bar1 shows different levels of GFP and RFP, displaying bistable phenotypes. Our modeling predicts that upon inclusion of Bar1, a protease that degrades alpha factor and sharpens concentration gradients, we can set a threshold of activation for our cell populations. Cells that activate enough are able amplify themselves more with positive feedback and surpass this threshold. Bar1’s purpose is to turn weakly activating cells off and to lower the background activation so that we can observe a larger gap between the “ON” and “OFF” states of cells. Bar1 (or some signal degradation motif) appears to be crucial in achieving a bimodal response. 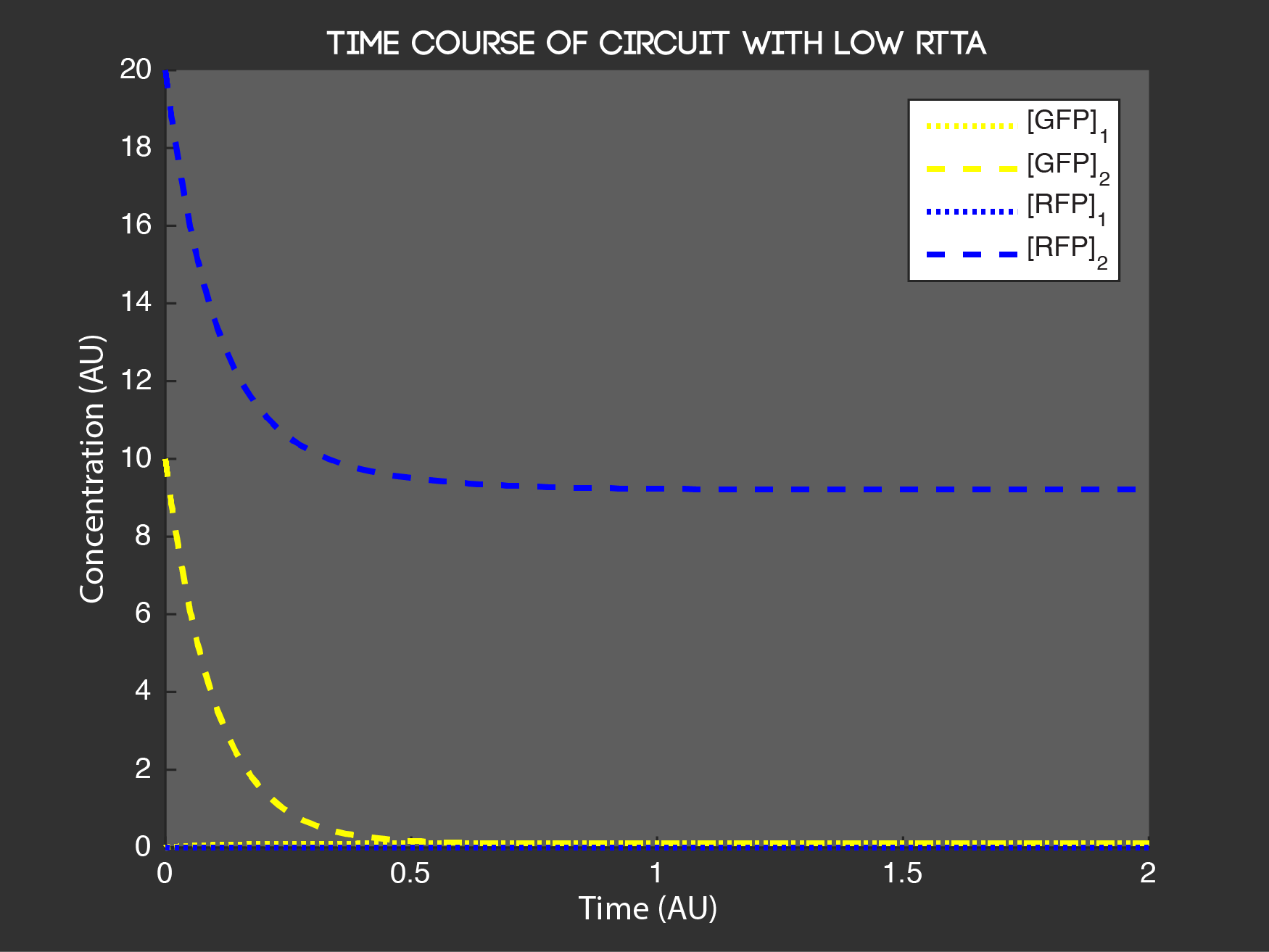 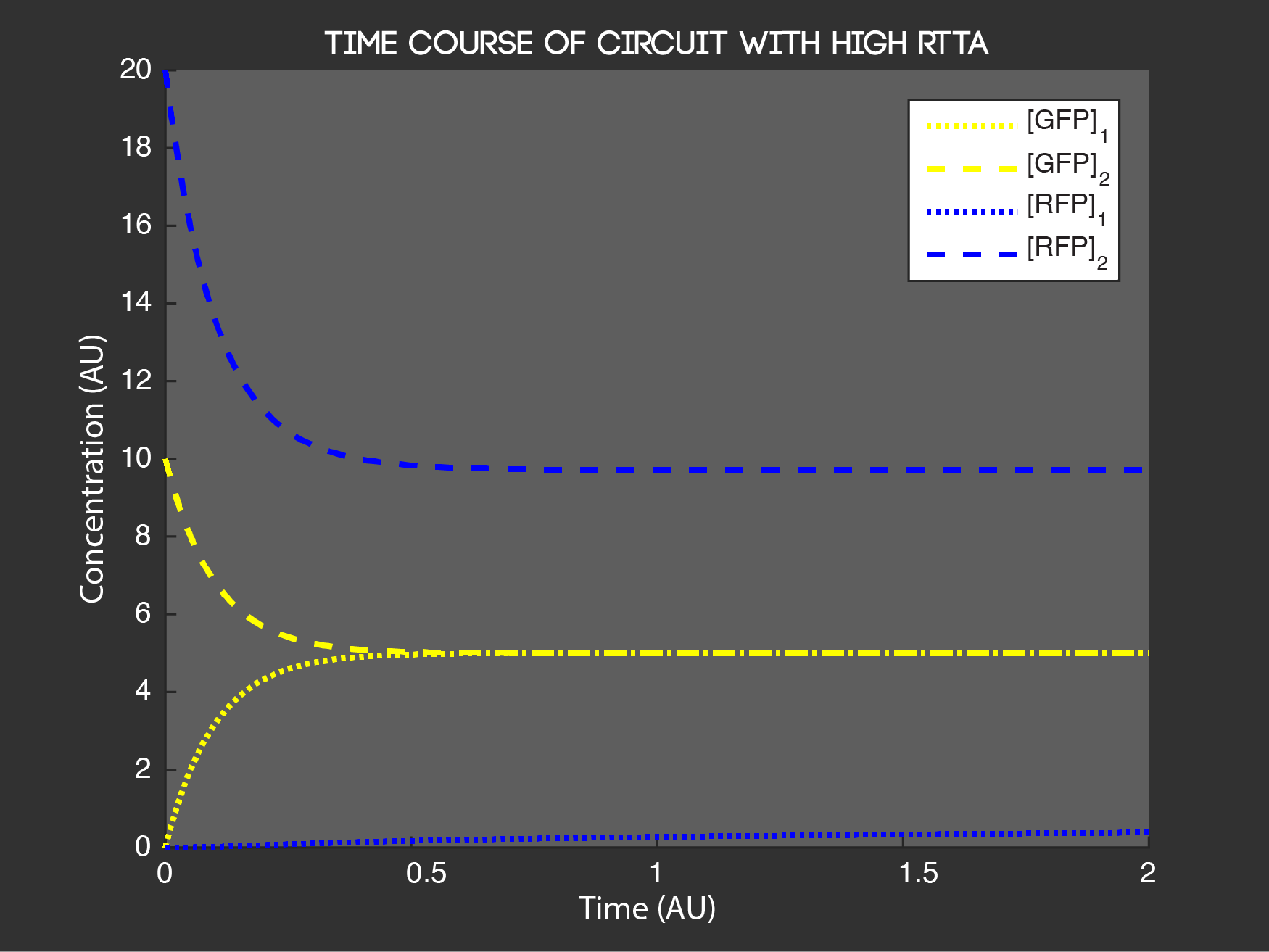 Under these conditions, both plots show the same GFP and RFP readouts over time. Thus, through our modeling we can predict that doxycycline sensitivity (rtTA synthesis) is not a vital factor in a population exhibiting divergence. Both low and high rtTA (which will compound with our stimulus to read out an individual response) are able to participate in bimodal activation, although with varied peak levels of activation. This model implies that genetically identical cells with the same individual response to a stimulus (regardless of responsiveness) are able to selectively activate given that they contain the same core communication motifs.