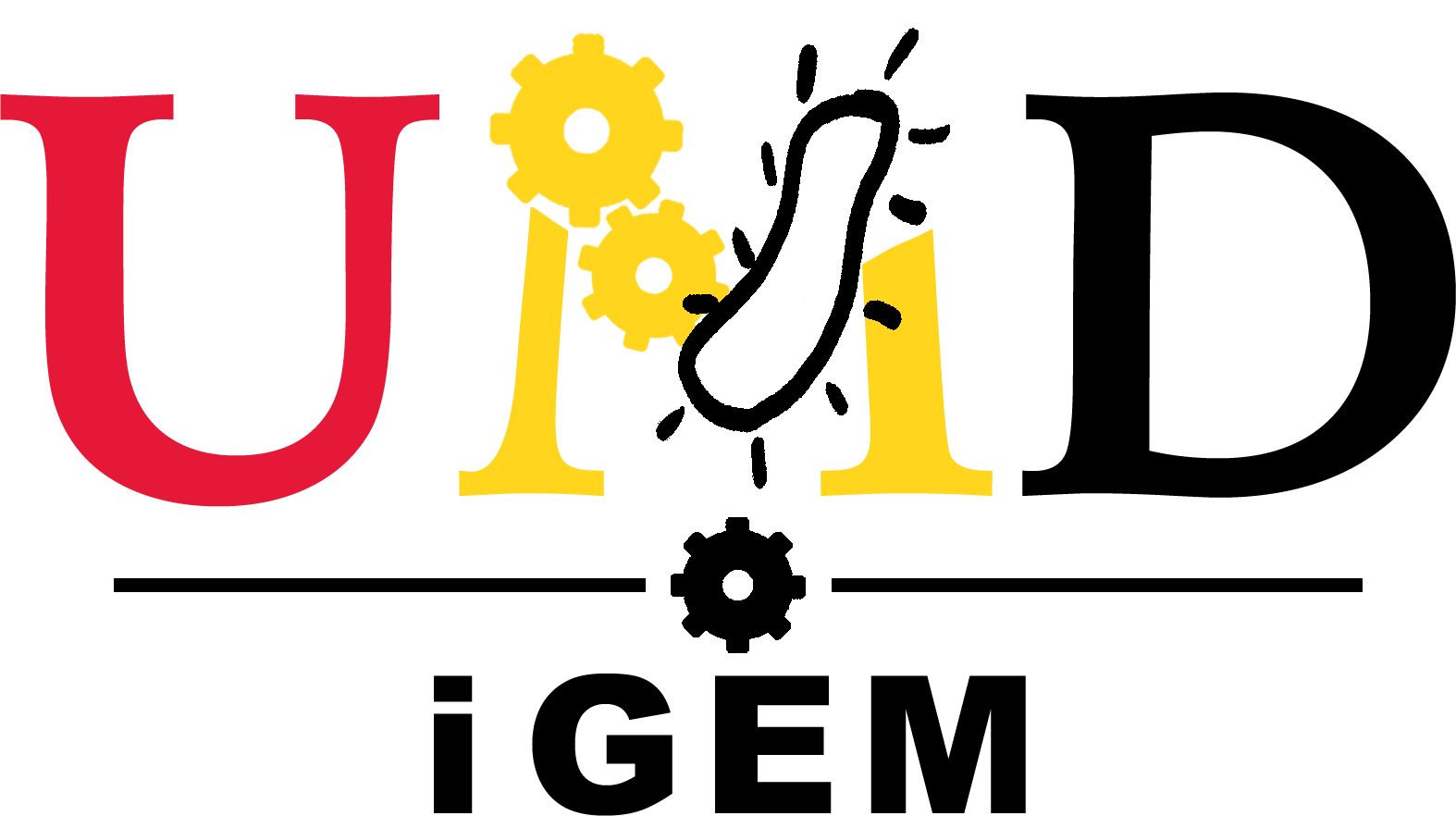 Find out about our several projects for the year

A study across iGEM labs

Other projects we've worked on

Alternative methods of plasmid maintenance and PCR amplification accelerate the construction of new biodesigns, reduce cost, and avoid environmental hazards. Plasmids are typically maintained in cells by encoding enzymes that hydrolyze or otherwise detoxify antibiotics added to the medium. However, this process carries an inherent risk for spreading antibiotic resistance to native bacterial populations through lateral gene transfer. The Hok-Sok toxin-antitoxin system, a natural internal maintenance cassette relying on internal mRNA silencing, presents an alternative to common antibiotic-based methods since it does not rely on exogenous drugs. We are also developing an integrated, microcontrolled thermocycler using common household components. Using nichrome wire and a motorized fan for air circulation, the programmable prototype is an inexpensive, versatile thermocycler or plate incubator. Because the material and construction costs are a fraction of dedicated instruments, the newly developed unit will find broad application among nascent synthetic biologists in underfunded environments.

While present on a plasmid, the Hok-Sok system maintains plasmids through mRNA silencing. The Hok-Sok cassette actually contains three genes:

Hok encodes a 52 amino acid toxin that is capable of permeating the cell membrane, leading to a loss of electrochemical potential and cell death. The hok toxin acts with "single-hit" kinetics, indicating that a single molecule of translated hok is sufficient for killing a cell. Hok is located on the forward strand of the Hok-Sok cassette and is freely transcribed under a weak promoter. How then, do cells not die whenever they possess the Hok gene?

In order to stay alive, cells need to be able to block translation of the hok transcript. Located on the same locus as hok is mok, which modulates whether or not hok is properly translated by the ribosome. Mok is located on a different reading frame than hok and the two genes are always co-transcribed as part of a single mRNA transcript.

Mok is then recognized by sok, a short ssRNA "antitoxin" transcribed under a strong constitutive promoter on the reverse strand of the Hok-Sok cassette. Sok is capable of forming a double-stranded RNA duplex near the 5'-end of the mok transcript. This duplex formation indirectly blocks the hok open reading frame, preventing the transcript from being read. The dsRNA duplex is then recognized by RNAse III, leading to enzymatic degradation of the silenced transcript. 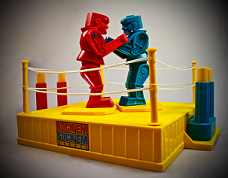 Below is a simplified diagram of how the Hok-Sok system maintains a plasmid: 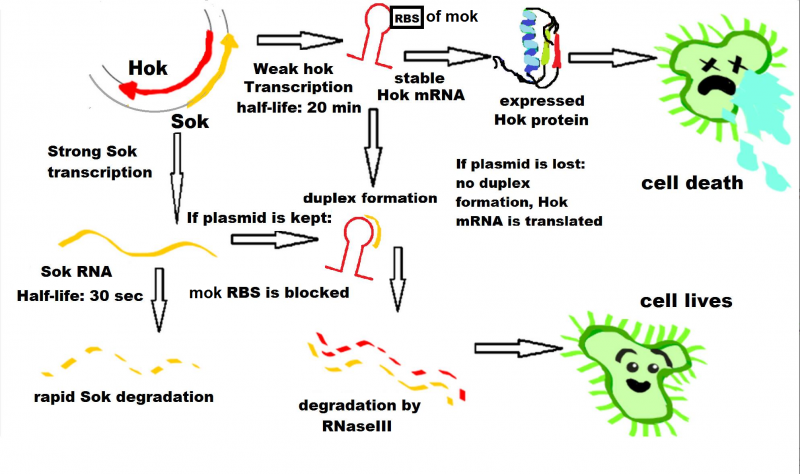 How does this process lead to plasmid maintenance? Hok mRNA, due to a high degree of secondary structure, has a long half-life, measured at 20 minutes, or approximately the time of one growth cycle. Sok, on the other hand, has a half-life of only 30 seconds. Thus in order to continue suppressing hok translation, the cell must retain the sok gene, and consequently the plasmid, through cell division if it is to constantly produce enough sok to continue inhibiting hok translation. If the plasmid is "lost", or not passed down to the daughter cell, then both the Hok and Sok coding regions will be lost. However, due to its long half-life, previously transcribed Hok mRNA will remain in the cell while previously transcribed sok rapidly degrades. No longer silenced, hok mRNA will be then translated, killing the daughter cell that did not maintain the plasmid. In nature, this is how the Hok-Sok system maintains antibiotic resistance in E. coli in the absence of antibiotic pressure.

Our wet lab project for 2015 was to demonstrate that the Hok-Sok system could maintain a recombinant plasmid containing BioBricks over many generations of bacterial division. We also wanted to compare the effectiveness of Hok-Sok to traditional antibiotic maintenance systems. We thus hypothesized that the Hok-Sok system could thus serve as an ethical alternative to antibiotic pressure.

Learn more about the Hok/Sok design

PCR is a common tool used in the laboratory environment as it is a vital component in DNA amplification and any cloning procedure. However, the majority of PCR machines used in the lab are bulky and expensive and are rarely seen outside of biology-based labs. Making the device cheaper would give more people accessibility to this valuable lab tool, enabling research in more places around the globe. These factors, and the desire to expand the efforts of the DIY Bio movement, inspired the development of the UMaryland team thermocycler. While our machine is firstly a PCR machine, it is also able to function as an incubator. Our machine is a dual purpose, compact PCR machine that is as fast and proficient at amplifying DNA as lab based machines, but constructible for the fraction of the price of lab-grade PCR machines and a great tool for teaching-based applications. Fast— Our PCR machine is able to reach 95℃ in under a minute due to the utilization of the heating element of a hair dryer. It also cools to annealing temperature in a few minutes.
Cheap— The main components of our machine consist of a hair dryer ($25), an Arduino UNO ($25), a temperature sensor ($2), two electronic relays ($5 each), and a soda can ($1). The combined cost of these materials is under $60.
Open— Our machine provides a solution to the financial and logistical difficulty of bringing these machines into the classroom. PCR is an extremely important topic in biotechnology, but it is typically also one that requires one to "see it to believe it." However, schools often cannot afford to purchase thermocyclers due to their high cost. By manufacturing a cheap, DIY thermocycler that can be assembled at a low cost, we can help bring this technology into schools that would otherwise be unable to afford it.
Two-Fold— Although originally intended for PCR exclusively, we were able to slightly modify our machine to also serve as an incubator by inserting it horizontally into the side of a shoe box. The temperature was maintained in the same way as the PCR and it is a more ideal set up since it is cheaper than lab incubators and there is more airflow across a large area than an incubator lamp could provide
Click the button below for more details.

Learn more about our PCR design and development