CRISPR/Cas9 has seen an explosion in use over the last five years, both within and outside of iGEM. Recent developments have extended the functionality of the Cas9 protein by modifying the nuclease domain to remove its catalytic function. This Cas9 variant, dCas9, can be used to simply target and bind to DNA. If dCas9 is targeted to a promoter, this binding causes steric hindrance, preventing RNAP from binding to and activating transcription [1-3].

However, despite several iGEM teams using both Cas9 and dCas9 variants in previous years, there have been no codon-optimized versions of the Cas9 protein made for E. coli. Part BBa_K1795000 is a dCas9 protein-coding region that has been optimized for expression in E. coli. Additionally, we created a functional dCas9 operon that, when transformed into E. coli is constitutively expressed. 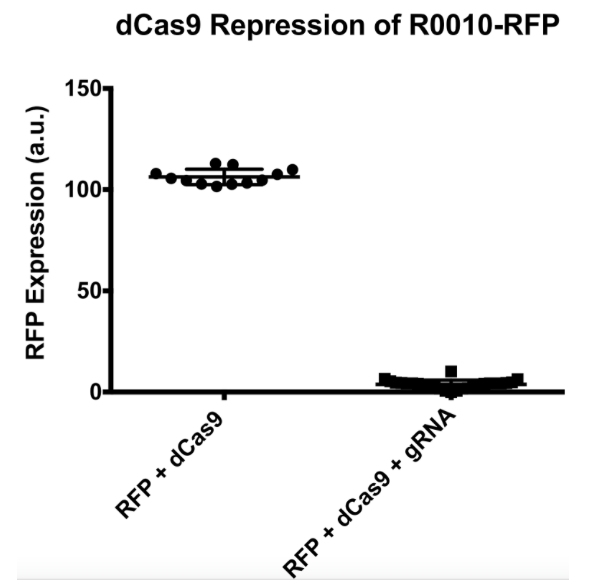 (RIGHT) This part has been functionally validated by showing 97% repression of R0010-driven expression of RFP when co-transformed with BBa_K1795002.