Design of a real synthetic biology game: the Bio-Console

It is based on the control of engineered bacteria in a microfluidic chip connected to a computer interface. Our game is dependent on:

Our team wants to promote Synthetic Biology using an original point of view. The goal is to make this field accessible to everyone by using a playful & entertaining tool.. 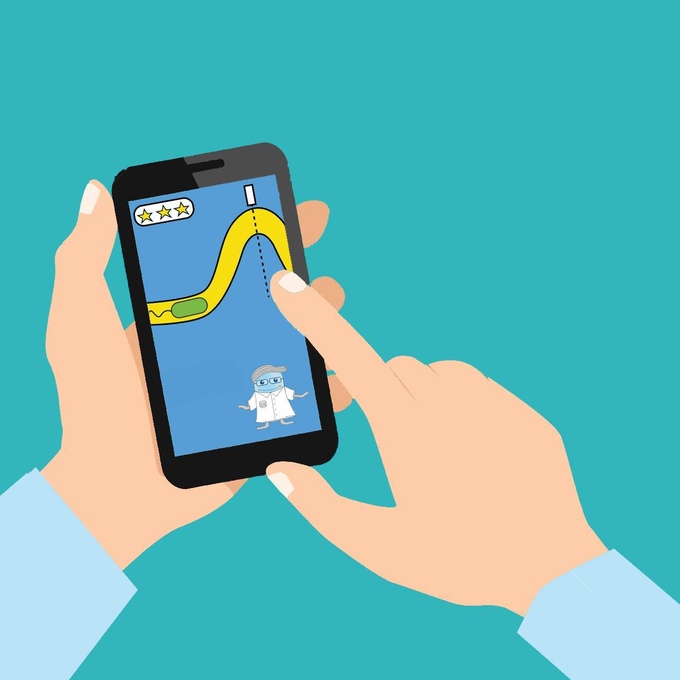 What do we do exactly? 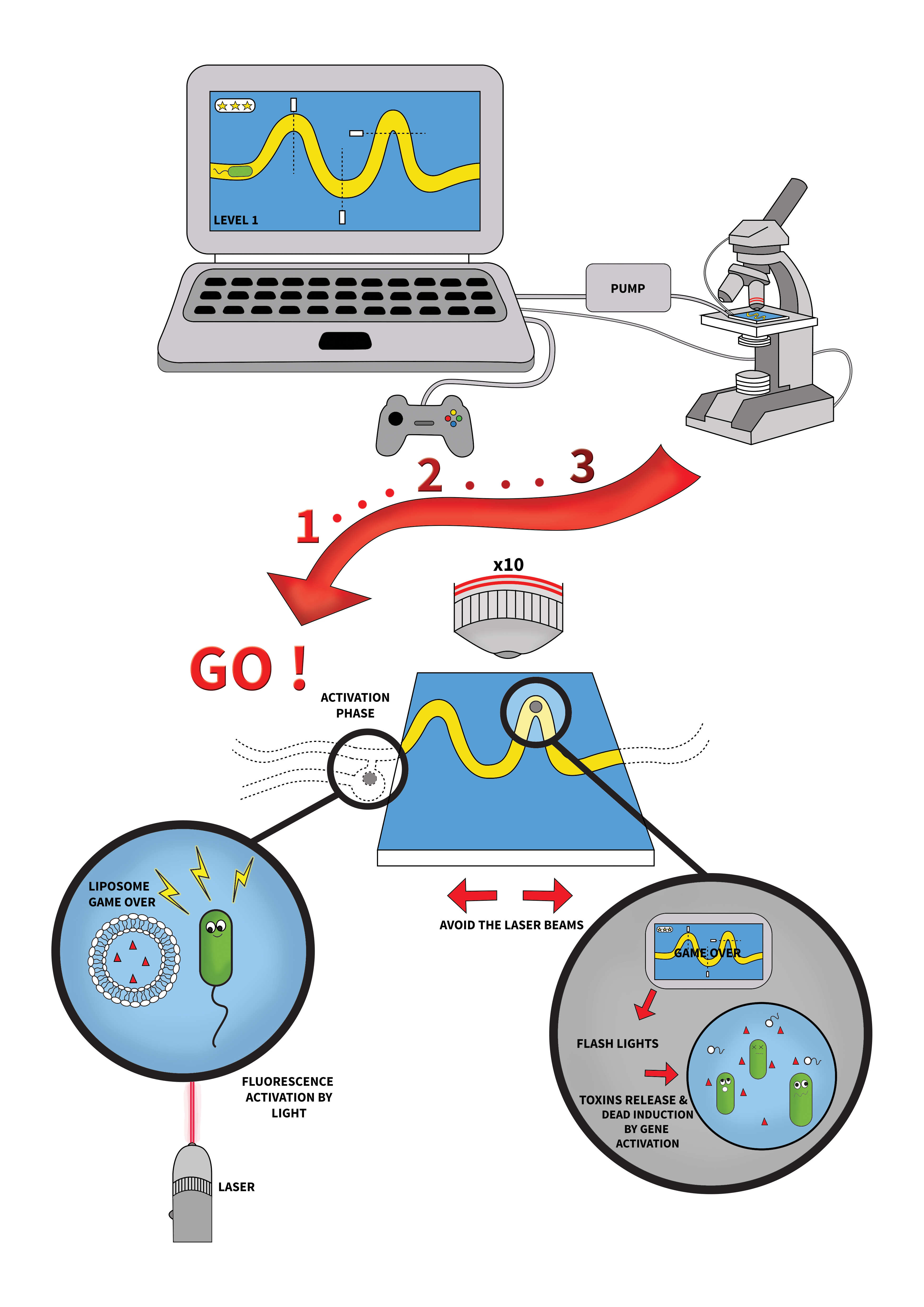 How will work our Bio-Console ?

To begin, we need our bacteria to be visible to the player. That's why we added the genes responsible for bacteria fluorescence or bioluminescence. Our genetic constructions will allow us to induce bacteria fluorescence through light signals or bioluminescence. In this way, we can make each group of bacteria directly visible before starting of the game. Then, the bacteria will be introduced in an aqueous medium having the same density as the water. In this environment, the bacteria will have all the molecules that allow them to survive in the game. There will be as well some liposomes (small capsules where the internal environment is separated by membranes from the external environment). Inside of these liposomes, bacteria destructive toxins will be present, and this is where the gameplay of our game relies. Once the bacteria are visible, we will introduce the aqueous medium in our microfluidic chip. This chip will be placed beforehand under an optical microscope itself connected to the computer screen. The aqueous medium then forms a sort of bubble containing BactMan and toxins trapped in the vesicle. This bubble will be directly controlled by the player by flows through the joystick as it is related to the computer.

The goal of the game !

The goal is simple: to allow BactMan to survive as long as possible. Stop him from getting in contact with the virtual lasers that will appear faster and faster as the game goes on. If BactMan were to be touched, a bright flash will appear at the microscope and will activate the liposomes opening. The toxins will eliminate our hero that will lose his fluorescence ... GAME OVER

The mobile application that IONIS iGEM designed is available on all Android mobile phones. We designed this application in order to communicate and popularize Synthetic Biology. BactMan Adventures is a mobile application popularizing science through educative mini-games around the life of a bacteria. With it, you can discover key notions of biology through several mini-games in two distinct environments: the intestines and the iGEM laboratories. Apart front the mini-games, the application offers information about our team, the iGEM, and synthetic biology : introduction of iGEM and of the BioBricks, presentation of the IONIS iGEM team and of our Bioconsole project, glossary of technical terms... 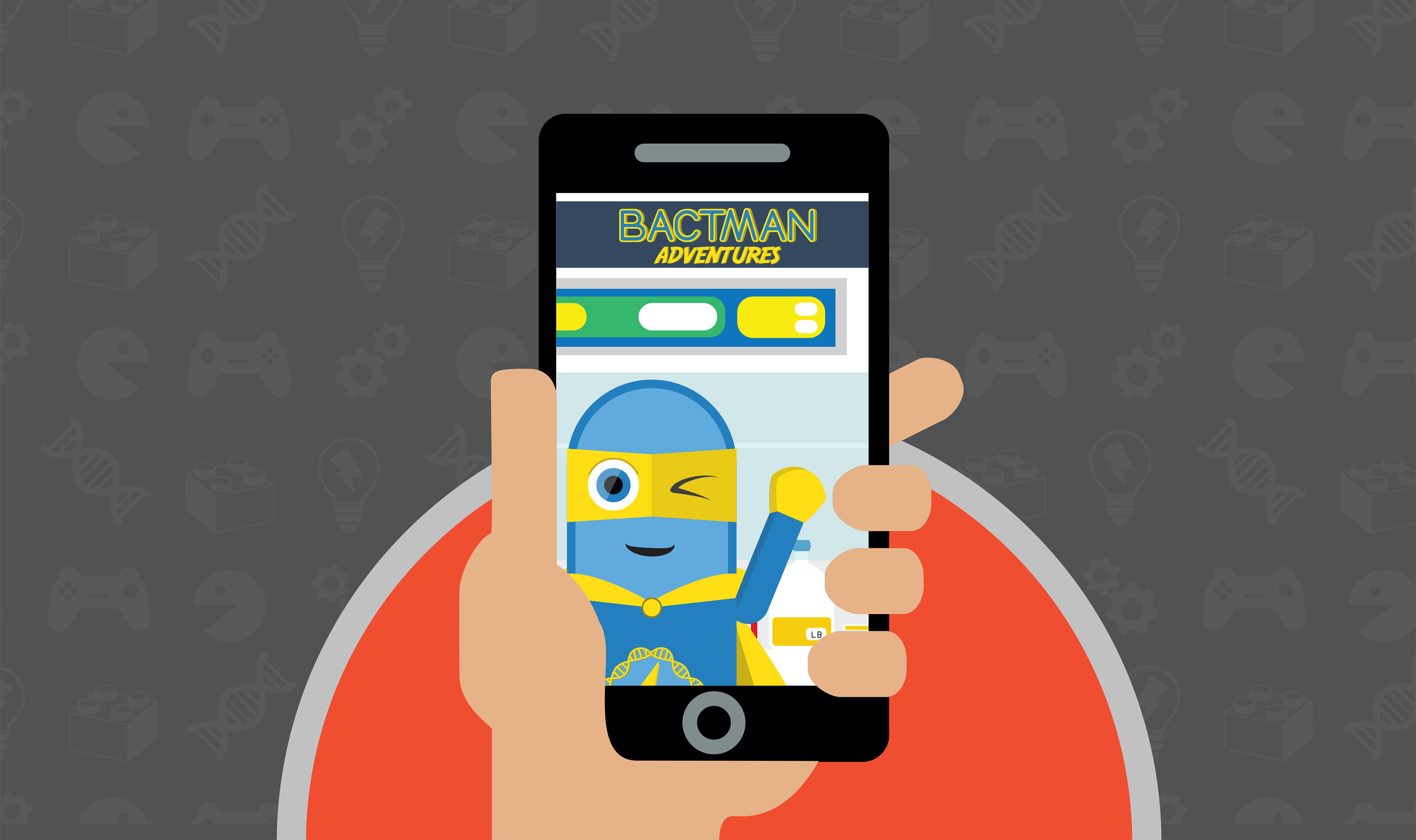