Stainless steel is an alloy of different metals and apart from the base material, iron, contains a large proportion >11% of chromium. There is a wide range of stainless steels for a variety of different applications, ranging from surgical steel to alloys used in the aeronautic industry. For our application we assumed stainless steels that are used in bulk production of standard kitchen knives with a chromium content between 12% and 14%. We also utilise the fact that chromate is a salt containing chromium. Bone incisions and kerfmarks, distinctive marks left behind, are current indicators for different types of weapons such as saws (1) or knifes. 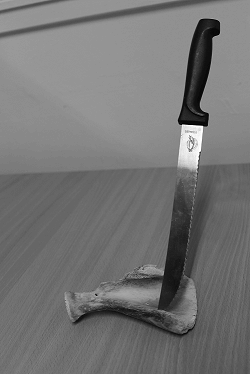 At the beginning of the project we met with Dr. Lucina Hackman, an expert in dismemberment cases at the University of Dundee. In dismemberment cases it is obvious enough that a body has been dismembered. However, if the body is not found for a long time and the only remains are bones, it is hard to tell if a person has been stabbed or if an animal was chewing on the bone. This is where a chromate biosensor would be useful. By detecting minute amounts of chromate on a bone, the use of a weapon may be inferred which will justify searching for trace evidence.

We found that a chromate detector had already been submitted by the Beijing Institute of Technology 2013 iGEM team, where they had created a biobrick for this BBa_K1058008 (Fig. 1). The biobrick is a modified version of a highly sensitive chromate resistance operon of Ochrobactrum tritici 5bvl1(2,3), containing a promoter, Pchr, a coding region for a chromate responsive repressor of this promoter, chrB, fused to the sequence of the fluorescent reporter GFP.

The Science behind Chromate resistance

Ochrobactrum tritici 5bvl1 was discovered in 2004 in a chromate contaminated wastewater treatment facility. A specific characteristic of this strain was that it could both, reduce Cr(VI) and be resistant to it at the same time. Previously characterised strains were either resistant or could reduce chromate (2). Over the last 10 years the group that discovered it started working out the underlying mechanisms of this set of characteristics. A transposon located set of genes that lead to chromate resistance (TnOtChr) was uncovered. This operon, expressed from the Pchr - promoter led to the expression of the downstream genes chrA, chrB, chrC, and chrF. chrA was found to express and efflux pump, whereas the gene product of chrB was identified as being a chromate-inducible regulator of Pchr. Additionally, chrC and chrF were found to confer tolerance to superoxides. Deleting chrC and chrF was shown to have no significant effect on chromate resistance which at first seemed unusual, but considering that Cr(VI) is often reduced via Cr(V) and Cr(IV) intermediates which can lead to the generation of superoxides, these 2 genes are suspected to act as a second line of defense (4).

To make the system more modular, we aimed to modify and improve this existing biobrick by taking it apart and using its constituent parts in a new arrangement (Fig. 2). This has the advantage that each part can be modified individually and the level of the reporter, GFP, and/or the repressor can be modulated more easily by subcloning either of them.

How did we test it?

To ensure that the modified system was valid we used mathematical modelling to compare the original biobrick and our modified system (Fig. 3). We also looked at GFP production with varying levels of chromate added to the system (Fig. 4). The models of both the original and modified pathways revealed two key points; the modified pathway is just as reliable as the original pathway, and the level of GFP produced does not change. However the response will be faster for increasing levels of chromate added to the system.

The models allowed us to ensure that it will be valid to use our modified system. Our cloning strategy hence focused on taking this brick apart and using its constituent parts in a new arrangement (Fig. 2). To test our system, we used the two compounds potassium chromate, and potassium dichromate. We also used two control substances, chromium(III)chloride and the isostructural potassium sulphate and observed if it had any influence on the level of fluorescence. Chromium(III)chloride was chosen to probe the system's specificity for Cr(VI), and potassium sulphate was chosen in order to test the structural selectivity for Cr(VI). All additives were tested at concentrations between 10nM and 100µM as recommended in the literature. (5).

Before testing the complete system, we first checked if we can detect both individual parts of it. For this purpose, western blots against both, GFP, and His-6 - ChrB were done (Fig. 5 and 6). 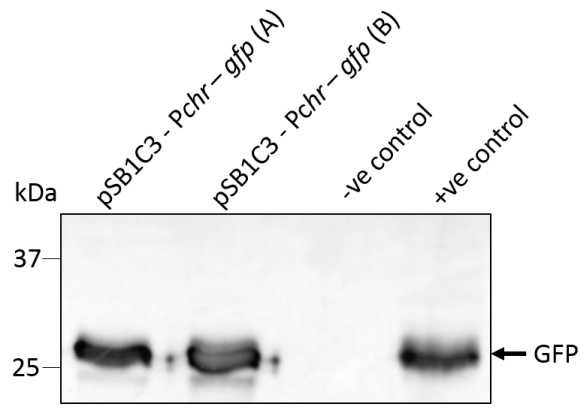 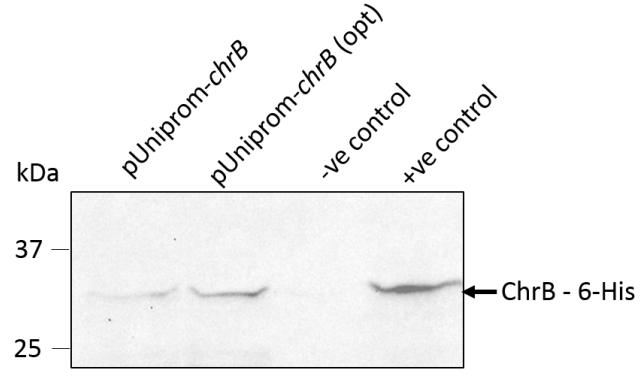 The newly designed system was investigated firstly by comparing the GFP output for the different concentrations of the respective additive. At the same time the results were compared to the original biobrick. Furthermore, the cell density was measured at the same time (Fig. 7). While in both cases an increase in fluorescence could be observed, this increase coincided in timing with the exponential increase of growth, suggesting that a higher level of fluorescence was observed due to more cells being present in the medium. Further experiments will have to be done in order to disconnect these 2 variables.


The original biobrick and our modified two plasmid system were furthermore compared by western blotting (Fig. 9 and 10). It was found that GFP was produced in the absence of chromate for both systems. This reason for these unexpected results could not be discerned, and further experiments are required to understand those. At this stage of the project the results indicate that ChrB might not be a repressor.

To complement our chromate biosensor, we originally aimed to find out how much chromate would be left on an incision in a bone from a stab of a certain force. However this was quickly turned around to measure the wear of bone instead of stainless steel. By calculating the force required to make the incision, this could potentially indicate the size or strength of a possible suspect, while the sliding distance would correspond to the length of the blade. The bone incision experiments allowed us to create a relationship between the applied force, sliding distance and wear volume when a stainless steel knife collides with bone. The results showed that the volume will increase as the length of the blade or the force increases (Fig. 11). However some irregularities were noticed and are likely due to experimental error with the equipment shown in Fig. 12. You can see Hannah demonstrating the method used in our STV appearance. 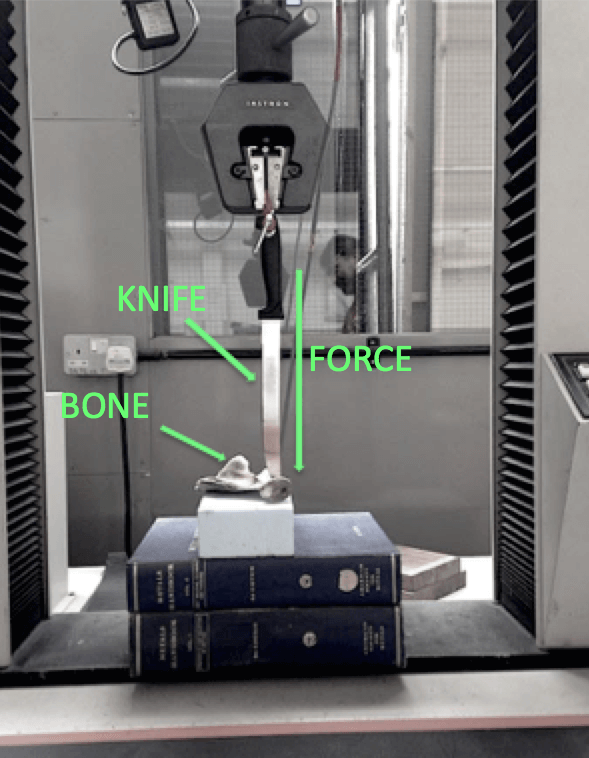 Figure 12: The Instron 4204 compression tested with the knife attached and bone placed on stand below.
Learn more about bone experiments ↑

Since most of the parameters were assumed in the mathematical models, there is room for error. Practical experiments could be done to produce values for the kinetic parameters or sensitivity analysis to compare varying kinetic parameter values. Probing the concentration range for detecting different chromate salts will be essential to feed back into the modelling which is currently largely based on assumptions. This would ensure that the models are more realistic and therefore give a more valid description of the systems.


The next step for this project is to find an ideal concentration of ChrB in relation to Pchr-gfp to work in a balance way of expression/repression. This involves finding plasmids with an appropriate copy number and promoters of appropriate strength. The modularity of this system makes this process easier. Once a concentration range has been established, we can test the system by using actual shavings of stainless steel. A problem that might occur is that the chromium contained in the alloy is in the wrong oxidation state. Oxidising chromium to yield Cr(VI) can be done by subjecting it to a strong acid. The solution will have to be neutralised again to be used as an additive for an experiment. The question is then if the concentration is still high enough to induce expression of GFP in our system. Good insights into the amount of steel retained after sharp-force trauma and blunt-force trauma on bones can be found in a series of papers (6,7). Potential contaminants will also be of great importance. Hence testing the system with similar compounds will be one test. Checking for the prevalence of inducing compounds in or around bones is essential to see how prone the test is to leading to false negatives.

Our Lab Records for our Chromate Detector ↑