Parkinson’s disease is the second most common neurodegenerative disorder with an estimated 10 million people living with the disease today. It affects patients in all aspects of their life and as such, there is an urgent need to improve treatments to allow patients to regain control and take command over the disease.


“I can choose to be governed by the illness or I can choose not to be.” (Julia, Parkinson's sufferer)


L-DOPA is the most commonly-used medicine currently available; it can cross the blood-brain barrier and is subsequently converted into dopamine to counteract the dopamine deficiencies in Parkinson’s. Although this therapeutic approach is effective, it also negatively impacts a patient’s quality of life. A main drawback of the current levodopa therapy is that it is administered in oral tablet form. This method of drug delivery can further exacerbate certain symptoms in that it leads to fluctuations in plasma L-DOPA levels, which often causes further motor complications further down the line, as well as causing numerous additional side effects.

Patients who cannot take oral L-DOPA due to several conditions (intolerance or too high tolerance to oral L-DOPA) are treated alternatively with a so called Duodopa ® therapy. Duodopa is a special way for administration of L-DOPA (Levodopa ®) directly into the human jejunum through a PEG-PEJ tube. This approach allows for a continuous and stable dosage of L-DOPA over the whole day. Some major problems of this approach are the incredible expense of $100,000 per patient per year as well as the wearing out of the tube every 2 years. 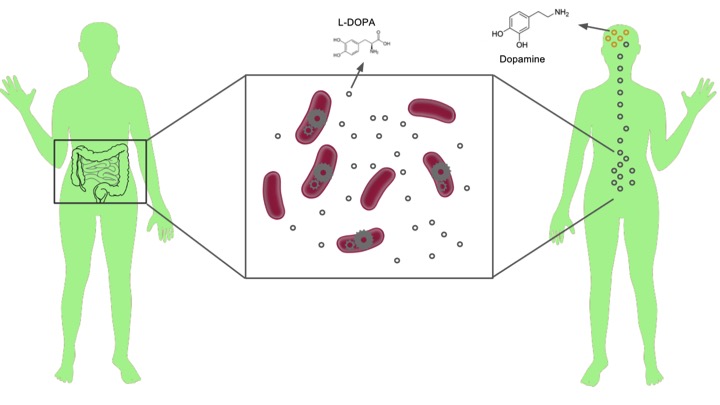 Our project aims to tackle problems with current Parkinson’s treatments by introducing a novel, self-regulating delivery system for L-DOPA: DopaDoser, based on the probiotic strain E. coli Nissle 1917 and expresses enzymes necessary for the synthesis of L-DOPA. The amount of L-DOPA produced is regulated via a sophisticated quorum sensing-based system to guarantee that therapeutic levels are reached without leading to peaks and troughs in plasma concentration levels.

In the future DopaDoser could significantly improve patients’ access to treatment and provide a cheaper alternative to Duodopa. The production of L-DOPA via genetically-engineered bacteria would also lead to mitigation of toxic by-products of chemical synthesis and the environmental concerns associated with this. The quorum-sensing system used in DopaDoser could also be applied in treatments for various other diseases as well as improving several industrial processes. 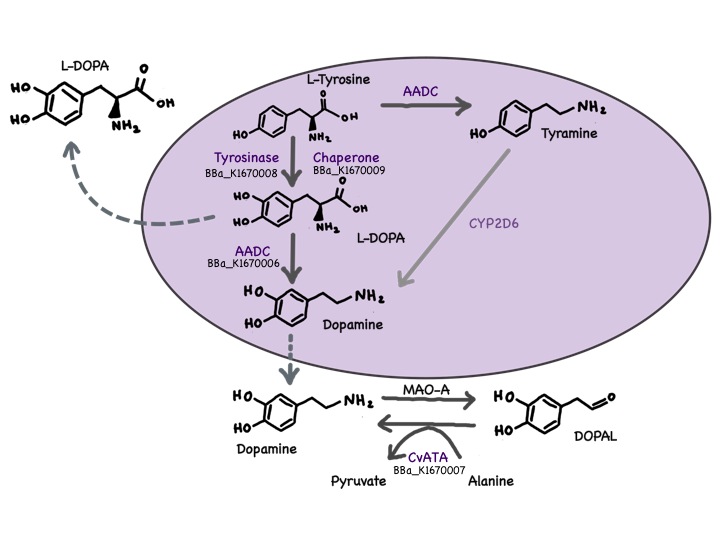 L-DOPA or levodopa is the current industry standard for treating advanced Parkinson’s by maintaining sufficient levels of dopamine in the brain. It is the most effective drug against rigidity and bradykinesia and can lead to significant improvements in the condition.

Alongside the biosynthesis of L-DOPA, we decided to also engineer the pathway to produce dopamine via different routes. Although oral dopamine cannot be used as a treatment for Parkinson’s since the molecule is unable to cross the blood-brain barrier, its key role in the pathophysiology of the disease led to the decision to include it as part of our project.

The biosynthesis of dopamine through our pathway could be used to replace industrial production of dopamine which is currently used to treat acute trauma by acting as a vasopressor and inotropic agent.

Recent research has shown that the loss of dopaminergic neurons in Parkinson’s is not limited to the brain. Lower than normal levels of dopaminergic neurons have been observed in the enteric nervous system of Parkinson’s patients as well as in animal models. These findings provide a long sought-after link between dopamine loss and gastrointestinal symptoms of the disease.

This means that low level regulated release of dopamine alongside L-DOPA directly in the gut of patients could have beneficial effects and relieve both motor and gastrointestinal symptoms of Parkinson’s. This regulation aspect played an important part in our project, and we discuss it in further detail below.

The conversion of L-Tyrosine to L-DOPA can be performed by both tyrosine hydroxylase and tyrosinase. Although tyrosine hydroxylase is generally more efficient at catalysing this reaction, it is not native to prokaryotes meaning that expression in E. coli could be problematic. Furthermore tyrosine hydroxylase requires the cofactor tetrahydrobiopterin (BH4) which is not naturally produced in prokaryotes. However, a study has shown that the molecule tetrahydromonapterin (MH4), which is native to gram-negative bacteria, could be used to replace BH4 in the reaction. Despite having a lower activity, this could lead the way to a self-regenerating pathway.

We made the decision to attempt expression of tyrosine hydroxylase using a sequence endogenous to Mus musculus codon optimised for E. coli BL21.

As an alternative we chose a tyrosinase (BBa_K1670008) from Marinomonas mediterranea, a gram negative bacterium, which should facilitate expression in E. coli. Our research revealed that the tyrosinase from M. mediterranea requires a chaperone which is responsible for the delivery of copper to the tyrosinase. This lead to the decision to also express the chaperone alongside the tyrosinase to allow for more efficient production of L-DOPA.

The tyrosinase in M.mediterranea, like those present in other bacteria and also mammals, forms part of the melanin synthesis pathway, which is involved in protection against UV radiation.


Dopamine Production via AADC and CvATA

The conversions of L-Tyrosine to Tyramine as well as L-DOPA to dopamine are both performed by an aromatic amino acid decarboxylase (AADC) BBa_K1670006. The AADC from Enterococcus faecium was generously provided by Syed Ahmed. As the original sequence included a PstI restriction site we decided to perform PCR mutagenesis to make it BioBrick compatible.

An alternative way of increasing dopamine levels in the human gut is to reverse the conversion of dopamine to DOPAL by monoamine oxidase A (MAO-A). This reverse reaction is performed by a transaminase (BBa_K1670007from Chromobacterium violaceum (CvATA) by transferring an amino group from alanine to DOPAL and therefore producing dopamine and pyruvate.

We are using two quorum sensing based mechanisms for an auto-regulated and time shifted consecutive protein expression, first demonstrated using fluorescent protein synthesis (Fig.3). The fluorescent protein could then be exchanged with genes for the L- DOPA production such that at low cell density levels L-Tyrosine synthesis will be channelled. After a certain biomass is reached L-DOPA production will be produced in a uniformly continuous manner. Alongside the use of fluorescent proteins for the characterization of our regulatory system, we also try to further characterize and improve already existing reporter genes of the BioBrick registry. BBa_K1670003 is an improved variant of BBa_K1362461, where two silent mutations were introduced to delete two HindIII sites and a new ribosome binding site as well as a new promoter were added. BBa_K1670001 is an improved version of BBa_E0020, where also a new ribosome binding site and an EsaR/I regulated promoter was added. 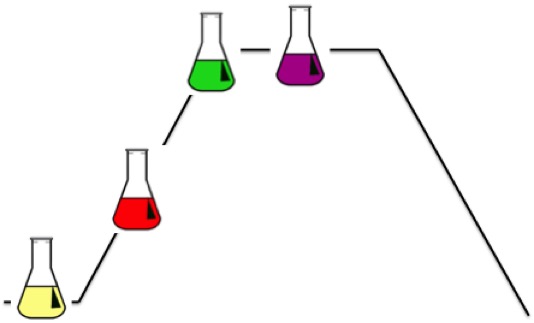 Looking to the future our system could be further utilized to activate suicide genes in E.coli to avoid possible overgrowth of the native intestinal flora, which we aim to show proof of concept in both strains common to academic research as well as probiotics, specifically BL21 and Nissle 1917 respectively. Even though we cannot regulate the proliferation of our engineered strain yet, it allows us to provide an outlook of a possible application as a self-regulating drug dispensing system in the GI tract, which may have clinical applications in the future.

Throughout the course of the DopaDoser project we also aim to shape our actions in accordance to the opinions of academics, industry leaders and the public. This includes what implications DopaDoser will have for patients both economically and in terms of quality of life and whether the real world implementation of this technology is feasible.

We will also compare ethical opinions throughout outreach about our project and synthetic biology in general across the two countries our team spans and assess this in a wider sociological context. We feel as a team that the issues and human practices surrounding our project are just as important as the project itself and as such we endeavour to tackle a wide selection of concerns.