are an emerging class of probiotics that provide benefit to psychological health of patients by secreting compounds which affect the nervous system. We have applied synthetic biology to incorporate the natural neuroregulatory properties of gut bacteria into synthetic genetic devices.
▼

Gut-brain communication involves biochemical signalling between intestinal microflora and host's central nervous system. These interactions are bidirectional: gut microbiome is influenced by our mental state and, at the same time, is capable of affect our mental well-being. The term psychobiotics describes an emerging class of probiotics that positively affect patient's mental health by producing neuroactive compounds, including neurotransmitters. The molecules associated with mammalian neurotransmission that have been isolated from gut bacteria include gamma-butyric acid (GABA), serotonin, dopamine, and acetylcholine Lyte, M. and Cryan, J. Microbial Endocrinology: The Microbiota-Gut-Brain Axis in Health and Disease Advances in Experimental Medicine and Biology Volume 817, 2014, pp 221-239 [Link][1]. When secreted into intestinal lumen, these molecules can modulate the neural signalling within the enteric nervous system which communicates with brain via the vagus nerve, therefore influencing brain’s biochemistry and host’s behaviour.

Probiotics are live microorganisms that, when ingested in adequate amounts, exert a health benefit on the host Report on Joint FAO/WHO Expert Consultation on Evaluation of Health and Nutritional Properties of Probiotics in Food including Powder Milk with Live Lactic Acid Bacteria, 2001. [Link][2]. The studies on mice indicate that several natural probiotic strains exhibit psychobiotic properties: treatment with Lactobacillus rhamnosus has been shown to regulate emotional behaviour and influence the mRNA expression of GABA receptor in host’s brain Bravo, Javier A, Forsythe, Paul, Chew, Marianne V, Escaravage, Emily; Savignac, Hélène M et al. Ingestion of Lactobacillus strain regulates emotional behavior and central GABA receptor expression in a mouse via the vagus nerve. Proceedings of the National Academy of Sciences of the United States of America vol. 108 (38), 2011, p. 16050-5 [Link][3], while another study has shown that administration of Bifidobacterium infantis results in increased concentration of tryptophan, a serotonergic precursor, in blood plasma and shows antidepressant properties as determined by forced swim test Desbonnet, L., Garrett, L., Clarke, G., Bienenstock, J., & Dinan, T. G. The probiotic Bifidobacteria infantis: An assessment of potential antidepressant properties in the rat. Journal of Psychiatric Research, 43(2), 2008, p. 164–174 [Link] [4]. Based on the current understanding of the role of commensal microbiota in regulation of host brain biochemistry and behaviour, we hypothesize that by engineering bacteria for precisely controlled neurochemical production we can develop probiotic strains that could potentially act as new strategies for mental health treatment.

The genes for our constructs were chosen based on the analysis of metabolic pathways involved in synthesis of neurotransmitter compounds, including tryptophan pathway, glutamate pathway, and acetylcholine pathway. The design of the constructs is explained below. The experimental protocols can be accessed here.

Serotonin is an essential metabolite, key neurotransmitter in mood regulation and a target of vast majority of antidepressant drugs. The majority of serotonin in the body is produced by enterochromaffin cells located in the gut Manocha, M. and Khan, W. Serotonin and GI Disorders: An Update on Clinical and Experimental Studies. Clinical and Translational Gastroenterology, 2012, 3(4), p.e13. [Link][6]. Metabolomics study has revealed that serotonin levels in blood plasma are 2.8 fold higher in conventional as opposed to germ-free mice Wikoff, W., Anfora, A., Liu, J., Schultz, P., Lesley, S., Peters, E. and Siuzdak, G. Metabolomics analysis reveals large effects of gut microflora on mammalian blood metabolites. Proceedings of the National Academy of Sciences, 2009, 106(10), pp.3698-3703. [Link][7], suggesting that the interactions between host and gut microflora play crucial role in regulating the production of serotonin and functioning of serotonergic system. 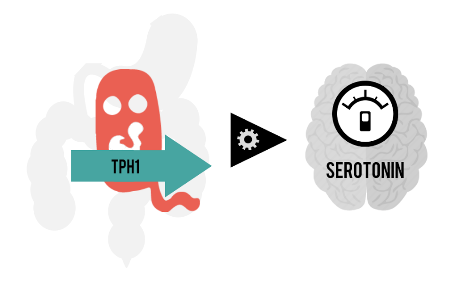 Our system addresses serotonin deficiency and dysregulation of gut-brain communication in patients with mental health disorders.

BBa_K1598001 - the basic TPH1 part. The consensus sequence of human TPH1 was obtained from UniProt (accession no: P17752). The sequence was codon-optimized for E.coli and adapted to BioBrick format. The construct was synthesized by IDT in a form of gBlock gene fragment and cloned into PSB1C3 using traditional digestion-ligation cloning. 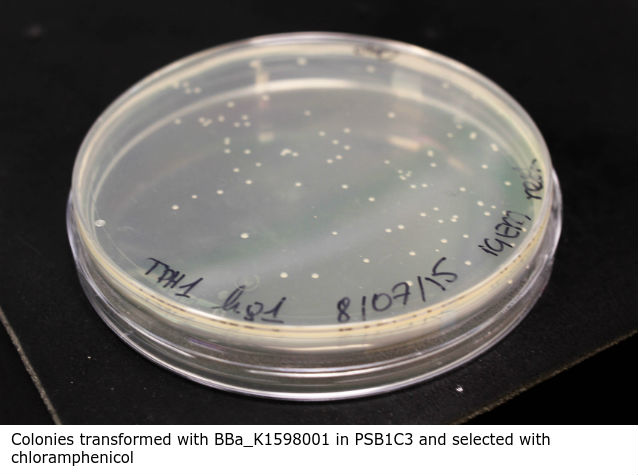 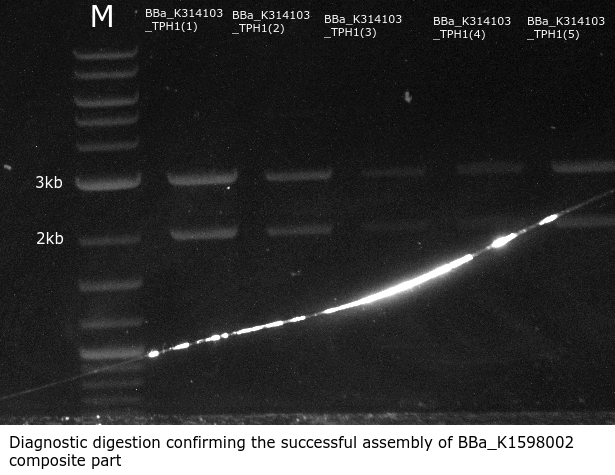 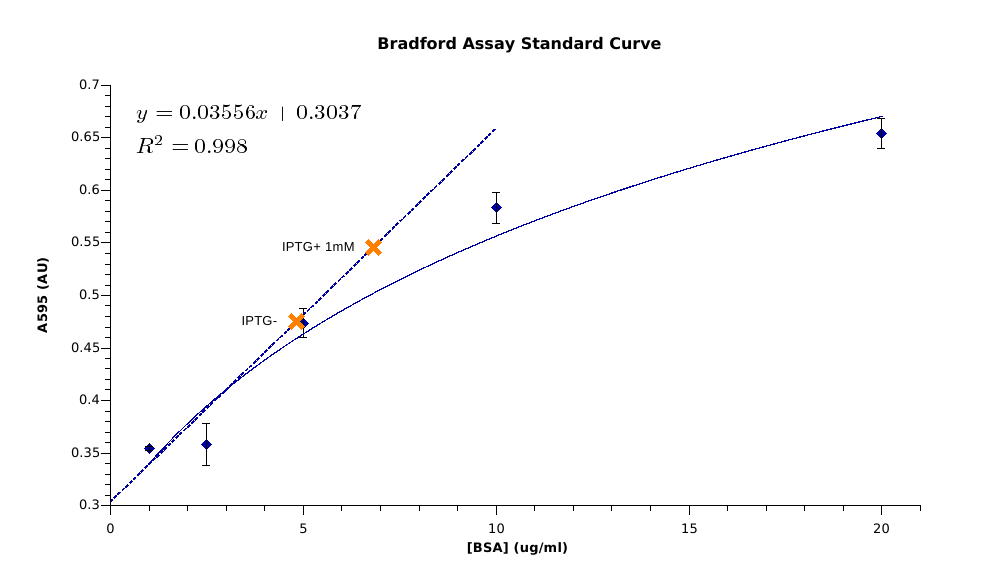 Standard curve for Bradford Assay. The absorbance of 10-fold diluted samples of induced lysate and uninduced control is indicated on the graph. 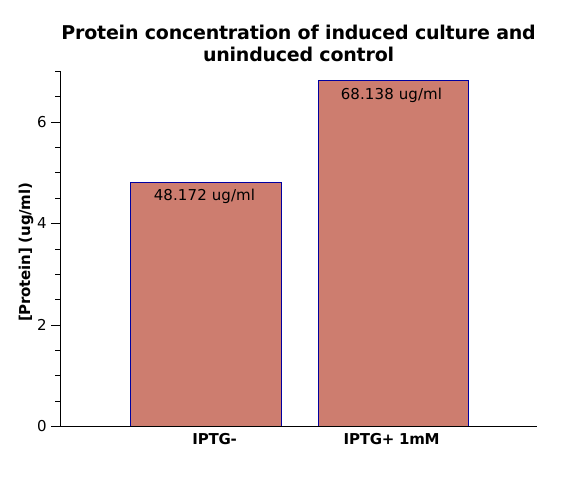 In order to characterize our biobrick, we have adapted the fluorometric assay developed by Moran and Fitzpatrick, which exploit difference in spectral properties of tryptophan and 5-HTP Moran, G. and Fitzpatrick, P. (1999). A Continuous Fluorescence Assay for Tryptophan Hydroxylase. Analytical Biochemistry, 266(1), pp.148-152. [Link]s [25]. According to the authors, tryptophan exhibits negligible fluorescence above 300 nm, and using excitation wavelength of 300 nm results in 5-hydroxytryptophan being almost exclusively excited. The emission is measured at 330 nm. As the assay was reported to be suitable for unpurified samples, we have performed fluorescence measurements using crude cell lysates. The detailed characterization protocol is available here: pdf or in Protocols section.

In order to demonstrate the TPH1 activity, samples containing range of crude lysate concentrations were added to the appropriate assay buffer and the reactions were initiated by adding 120 uM tryptophan solution. For blank measurements, uninduced control was used instead of induced sample. 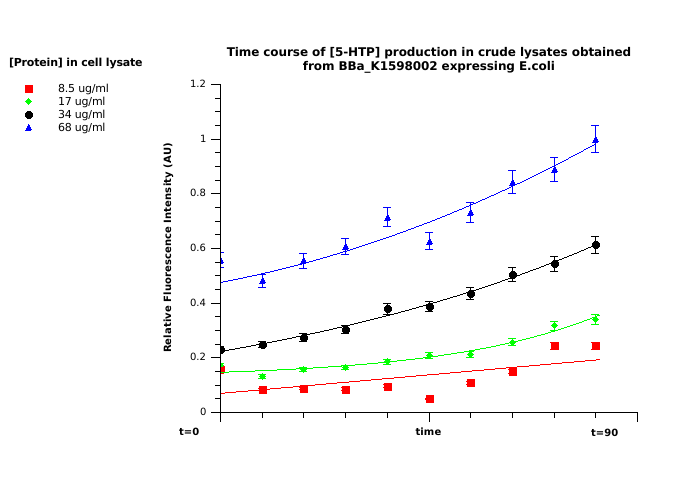 Increase in fluorescence over time indicates 5-HTP production. The reported fluorescence values are shown as means of 8 replicates +/- SD. All measurements are expressed as ratio of fluorescence of the sample to maximum fluorescence intensity observed .

The functioning of our serotonin-enhancing system relies strongly on the tryptophan availability in the gut. Several species present in gut microflora, including Escherichia spp. express tryptophanase, which performs degradation of tryptophan into indole, ammonia and pyruvate Chimerel, C., Emery, E., Summers, D., Keyser, U., Gribble, F. and Reimann, F. Bacterial Metabolite Indole Modulates Incretin Secretion from Intestinal Enteroendocrine L Cells. Cell Reports, 2014, 9(4), pp.1202-1208.[Link][10]. We propose to use antisense RNA complementary to tryptophanase-encoding gene as a strategy for downregulating the breakdown of tryptophan in the gut environment and, thus, optimization of 5-HTP synthesis.
In E. coli tryptophanase is encoded by tnaA gene. We have designed two synthetic regulatory small RNAs and investigated their applicability and sensitivity in silencing gene expression.

We created a genetic device for inducible expression of human CHAT and explored the acetylcholine-producing probiotics as a solution for restoring the acetylcholine levels in patients with depression and other psychiatric diseases.

BBa_K1598003 - basic CHAT construct. The consensus sequence of human CHAT was obtained from UniProt (accession no: P28329). The sequence was codon-optimized for E.coli and 6xHis tag was added on C-terminal. BBa_B0034 RBS and BBa_B0015 terminator were added upstream and downstream of the gene, respectively. The construct was synthesized by IDT in a form of 2 gBlock gene fragments (1013bp and 1182bp with 30bp overlap) and cloned into PSB1C3 using Gibson assembly.

The positive effects of GABA-producing species in the gut on the emotional behaviour of the host have been previously documented. In one study, administration of milk enriched in GABA-producing Lactobacillus brevis FPA 3709 had antidepressant effect on mice Ko, C., Lin, H. and Tsai, G. (2013). Gamma-aminobutyric acid production in black soybean milk by Lactobacillus brevis FPA 3709 and the antidepressant effect of the fermented product on a forced swimming rat model. Process Biochemistry, 48(4), pp.559-568. [Link] [22] . Another study has shown that ingestion of Lactobacillus rhamnosus reduces the stress-induced and depression-related behaviour Bravo, J., Forsythe, P., Chew, M., Escaravage, E., Savignac, H., Dinan, T., Bienenstock, J. and Cryan, J. (2011). Ingestion of Lactobacillus strain regulates emotional behavior and central GABA receptor expression in a mouse via the vagus nerve. Proceedings of the National Academy of Sciences, 108(38), pp.16050-16055.[Link][23] . Therefore, we suggest to investigate the therapeutic potential of administration of our GAD-overexpressing probiotics to patients with decreased GABA levels.

BBa_K1598004 - the basic GAD part. The consensus sequence of human TPH1 was obtained from UniProt (accession no: Q99259). The sequence was codon-optimized for E.coli and 6xHis tag was added on C-terminal. BBa_B0034 RBS and BBa_B0015 terminator were added upstream and downstream of the gene, respectively. The construct was synthesized by IDT in a form of gBlock gene fragment and cloned into PSB1C3 using traditional digestion-ligation cloning. 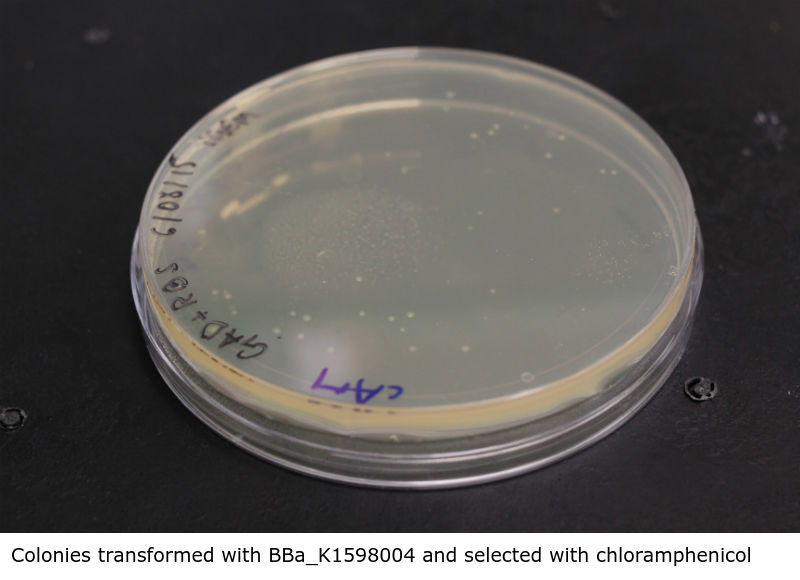 Also called Cytochrome P450scc, Cholesterol Side Chain Cleavage Enzyme (P450scc) is a mitochondrial enzyme that converts cholesterol into pregnenalone, which is a neurosteroid as well as the precursor to a variety of steroid hormones and neurotransmitters. The gene that encodes it is CYP11A1.

This is the reaction it catalyses:

Our biobrick consists of the iGEM prefix followed by the J23101 constitutive promoter, RBS, FDXR gene, RBS, FDX1 GENE, RBS, CYP11A1 gene, rrnb double terminator, and the iGEM suffix. This will be ligated onto a PSB1C3 backbone. 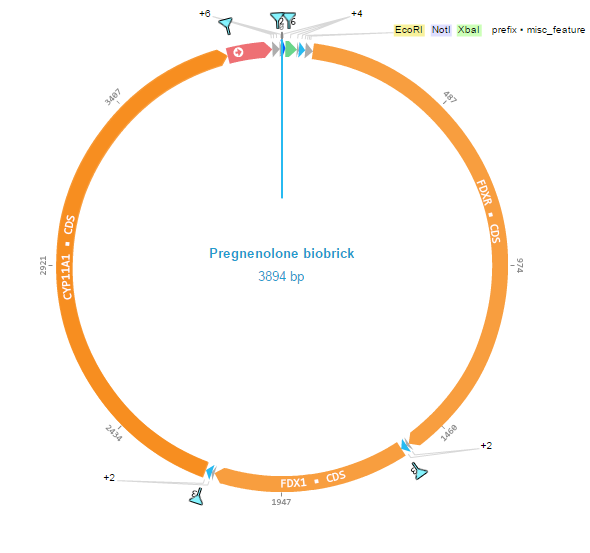 Our biobrick (excluding the vector) has been split into 5 parts for synthesis. Once they arrive, they will be assembled together using Golden Gate Assembly by the experts at Synthace, one of our sponsors. Sap1I will be the enzyme used according to the standard Golden Gate assembly protocol.

The protocols for all the steps describe above can be found on the protocols section of this wiki.

For assembling parts that are in Golden Gate standard, we used the following protocol:

Characterization Assay (HPLC): The steps were followed according to the protocol given in this paper.

Relief of Side-effects from Depression/Anxiety drugs:

Participant A, a long term depression patient we interviewed, suggested that our novel probiotics will be more accepted if they had reduced the side-effects when compared to conventional drugs. She also mentioned how drugs gradually became ineffective overtime, and the dosage needs to be constantly increased, which is a major financial burden. Well, the administration of Pregnenolone and its derivates prevents the development of tolerance, and augments recovery from benzodiazepine withdrawal anxiety and hyperactivity in mice. Benzodiazepines, such as Valium, are one of the most popular antidepressant/anti-anxiety drugs in the world! Basically, this removes the need to constantly increase the dosage, and gets rid of many side effects and withdrawal symptoms, associated with treatments that act on the GABA receptor. Hence, combining it, pregnenolone, with our biobricks creates a complete system, which not only treat mental illness but also reduce side effects of treatment! Hence we have expanded on our silver medal Human Practices activity by demonstrating how we have integrated the investigated issues into the design and/or execution of your project. [reference 1]

Neurosteroids derived from Pregnenolone modulate several neurotransmitter systems such as gamma-aminobutyric acid type A (GABA(A)), N-methyl-D-aspartate (NMDA) and acetylcholine receptors. As physiologic consequences, they are involved in neuronal plasticity, learning and memory processes, aggression and epilepsy, and they modulate the responses to stress, anxiety and depression. There is evidence for a common mechanism of action between neurosteroids and sigma1-receptor ligands and focus on the potential therapeutic interests of such interaction in the physiopathology of learning and memory impairments, stress, depression and neuroprotection. [reference 3]

Emerging preclinical and clinical evidence suggests that pregnenolone may be a promising novel therapeutic candidate in schizophrenia. Pregnenolone is a neurosteroid with pleiotropic actions in rodents that include the enhancement of learning and memory, neuritic outgrowth, and myelination. Further, pregnenolone administration results in elevations in downstream neurosteroids such as allopregnanolone, a molecule with neuroprotective effects that also increases neurogenesis, decreases apoptosis and inflammation, modulates the hypothalamic-pituitary-adrenal axis, and markedly increases GABA(A) receptor responses. In addition, pregnenolone administration elevates pregnenolone sulfate, a neurosteroid that positively modulates NMDA receptors. There are thus multiple mechanistic possibilities for pregnenolone as a potential therapeutic agent in schizophrenia, including the amelioration of NMDA receptor hypofunction (via metabolism to pregnenolone sulfate) and the mitigation of GABA dysregulation (via metabolism to allopregnanolone). [reference 6]

We ran an HPLC assay for the pregnenelone biobrick to characterise its function. Pregenolone was seen as a clear peak at around 11mins. A standard curve was plotted based on the peaks. The standard curve was then used to calculate the concentration of pregnenolone produced by each sample:

Therefore, we got a maximum pregnenolone production of 0.007 mg/ml within 4 hours of substrate addition!