Design 1: Cancer-specific CRISPR/Cas9-mediated activation of the gene of interest

This design utilizes modified CRISPR-Cas9 system for transcriptional activation of any gene of interest. 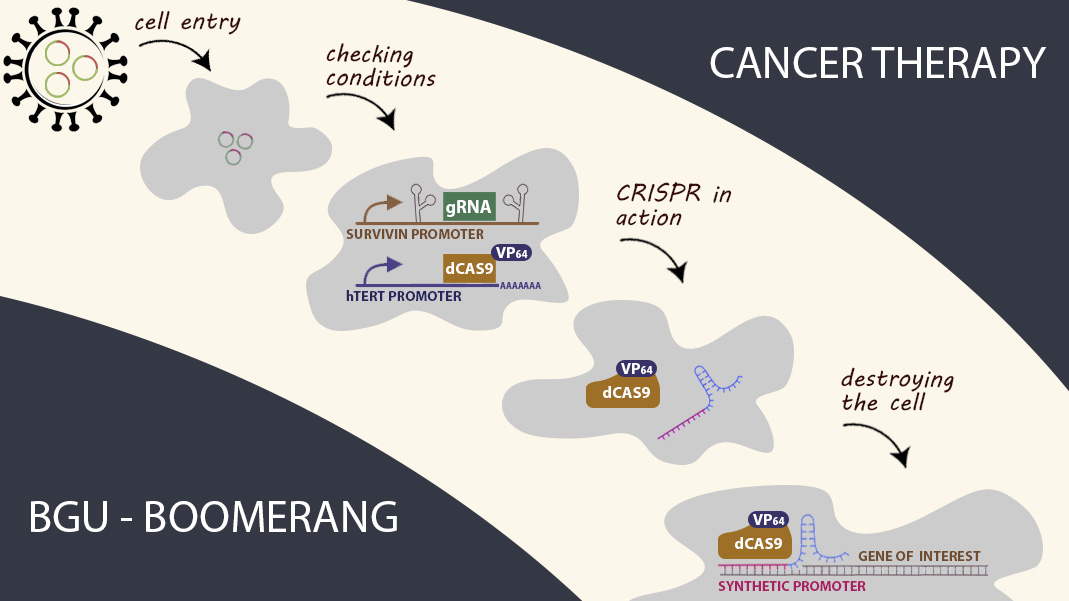 The system includes 3 parts: one AAV expression cassette with the activator Cas9 (dCas9-VP64), the second with a gRNA designed to guide activator Cas9 to synthetic promoter, and the third with the gene of interest (modelled by GFP) under the control of synthetic activation promoter.
dCas9-VP64 – dCas9-VP64 was engineered so that it lacks endonuclease activity (“dead” Cas9) and has 4 VP16 activation domains fused to the protein. We designed dCas9-VP64 to be expressed under the control of human TERT promoter. Therefore dCas9-VP64 should be expressed predominantly in cells in which the promoter is highly active, namely – cancer cells (1). When guided to a specific promoter, dCas9-VP64 activates transcription of genes downstream of its binding site (2). dCas9-VP64 was assembled into an expression vector under hTERT promoter.

gRNA- the guide RNA is a hundred base-long molecule with a unique two dimensional structure which binds Cas9 and guides it to a dsDNA sequence complementary to 21-22 base pairs on the 5' end of the molecule. The gRNA (using the scaffold sequence for Staphylococcus pyogenes Cas9) was assembled into a AAV vector, under the control of human survivin promoter (3). In order to utilize the cancer specific promoter hyperactivation we used an RGR (Ribozyme gRNA Ribozyme) design. This design allows for gRNAs to be transcribed and processed using RNA polymerase II promoters, since these are the main promoters controlling gene activation (4). The gRNA sequence is used to guide dCas9-VP64 to a specific synthetic promoter

Synthetic activation promoter- The third part of the system is an expression AAV cassette with GFP under the control of synthetic promoter (5). The synthetic promoter has 3 complementary sites for the gRNA, which, upon binding of dCas9-VP64 in a tandem, should promote transcription of a downstream gene.

For a proof-of-concept, we utilized GFP as our target gene. The design allows for an expression of any desired protein: 1) to induce cancer cell apoptosis or cell death by using reversed caspase-3, which can lead to apoptosis when expressed in cells (6), or diphteria toxin A, which can kill a cell (7), 2) label the tumor for complete surgical removal by using chromoproteins; and 3) produce a biomarker detectable in the blood or urine, for cancer diagnosis, for example, by using SEAP (Secreted embryonic alkaline phosphatase), which can be excreted out of the cells and its levels monitored easily (8) (Figure 1).

A functional prototype of this design working in human cancer cells is shown here.

This design utilizes “classical” CRISPR-Cas9 system for knock-out of a cancer-essential gene. 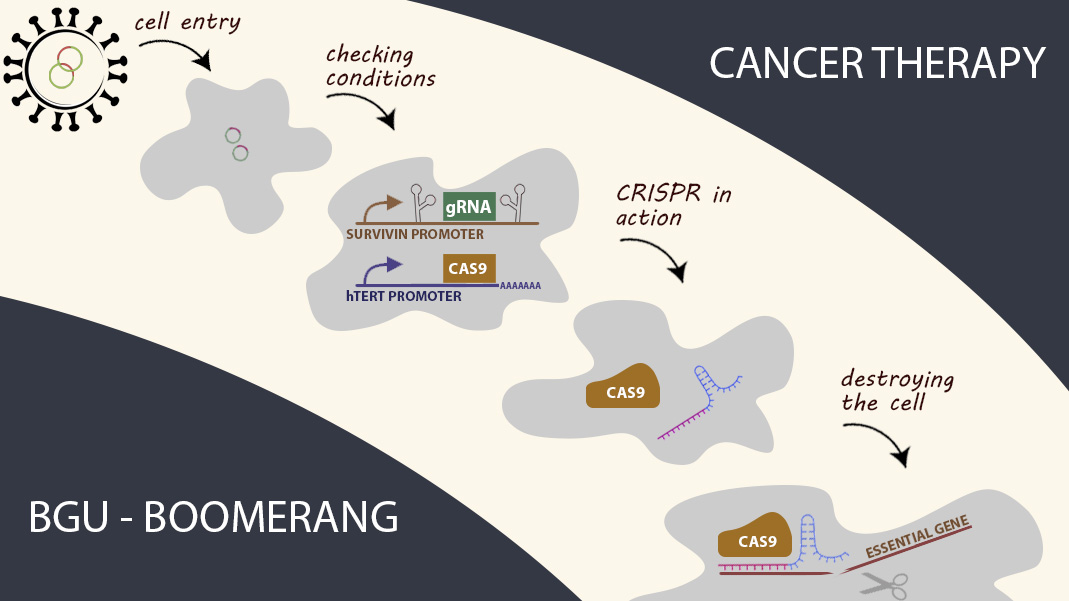 The system includes two parts: one AAV expression cassette with the Cas9 gene, and the other with a gRNA designed to target 3 sequence repeats in the second exon of Ubb.

Cas9 – the Cas9 endonuclease was assembled into an expression vector under hTERT promoter. We utilized Staphylococcus aureus Cas9 version (SaCas9) (9).

gRNA – The gRNA (using the scaffold sequence for Staphylococcus aureus Cas9) was also assembled into a AAV vector, under the control of human survivin promoter, using previously described ribozyme design.

When both conditions are met, meaning the system is in a cancer cell in which both promoters are highly active, the SaCas9 is guided by the gRNA to the target DNA, and introduces double strand breaks (DSB) at the target site. This then leads to activation of intrinsic DNA damage repair mechanism - predominantly error-prone non-homologous end joining (NHEJ), which introduces insertion/deletion mutations. This, in turn, can significantly disrupt a coding sequence, eliminating partially or completely a target protein function.

For a proof-of-concept of the knock-out system, we chose Ubiquitin B (Ubb) gene which encodes for poly-Ubiquitin, as a target for gRNA-guided SaCas9. Ubiquitin levels are elevated in most, if not all human cancer cells, it is essential to the growth of cancer cells, and the protein product of the gene is thought to help cancer cells adapt to increased stress (10). Ubb emerges as one of the promising targets for cancer therapy. For example, Ubb downregulation by siRNA has shown a high decrease in tumor proliferation and increased apoptosis, both in vitro and in vivo (10).

1. Design of “master” template with specific restriction sites for subcloning


3. Cloning of “master” into AAV vector 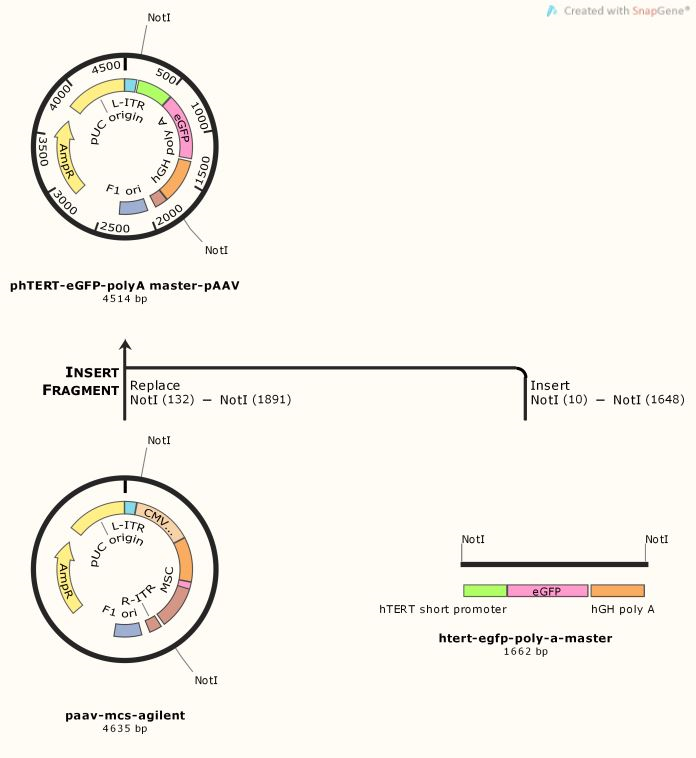