We have collaborated with several iGEM teams this year:

Stockholm team is working on cancer diagnosis by engineering of a bacterial sensor which could detect trace amounts of cancer biomarkers.

Our assistance to the team is to express a GPI-anchored Affibody [BBa_K1766012] on the plasma membrane of human cancer cells, which can then be specifically targeted by a compatible drug or toxin (Fig. 1).

We cloned the Affibody [BBa_K1766012] into our AAV vector for expression under CMV promoter (Fig. 2).


Fig. 2. A. Cloning map of Affibody into AAV vector. B. Successful cloning results.

Affibody-AAV was produced [link to protocol of virus production], and used for transduction of human cancer cell line (HT1080 fibrosarcoma cell line).
As the Affibody was predesigned to include 3xFLAG peptide (DYKDDDDK) in its sequence, we used anti-FLAG-specific primary antibody to specifically detect the protein in human cancer cells (HT1080 fibrosarcoma) using immunofluorescence [link to staining protocol]. We used two staining protocols, with and w/o permeabilization step, in an attempt to distinguish between extracellular membrane localization and intracellular expression. As shown in Fig. 3, transfection with Affibody-expressing vector resulted in detectable Affibody expression only when permeabilization step was applied. This could indicate the the protein construct is expressed, but it is not correctly transported and localized to the outer membrane, or FLAG sequence (the antigen for the primary Ab) is located inside the cytoplasm. 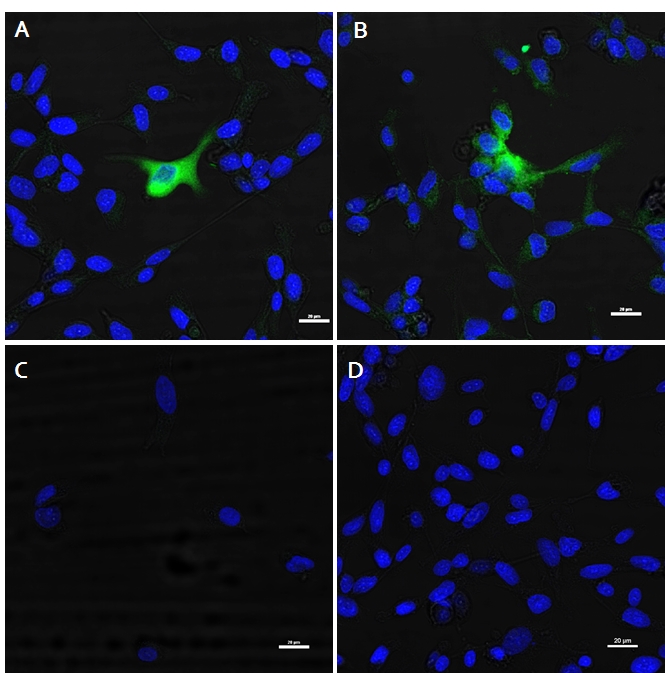 Affibody construct could be successfully expressed in human cancer cells. However, the design of the construct should be optimized to ensure the expression on the outer cell membrane for its subsequent use for cancer cell tagging and targeting. For detection, primary Ab against Affibody part of the construct is preferable, in order to clearly validate the expression on the outer membrane. In the future, the Affibody could be expressed exclusively in cancer cells using our Boomerang approach using dCas9-VP64-gRNA system under the control of cancer-specific promoters.

Aix-Marseille Université (France), proposed a collaboration. They needed to collect a lot of information about chewing-gum and GMOs around the world. They prepared a small survey, and we went to the streets and interviewed random people. It was a fun challenge. We received a gold badge for our help.

Amoy iGEM team issued monthly newsletter that enabled igem teams from all over the world to share information about their project and discuss issues concerning it and synthetic biology in general. For this year’s version of the Newsletter iGEM Amoy contacted iGEM Ben-Gurion to include us in the 2015 issue. We had the honor to collaborate and publish an article about our project in the fifth issue of 2015 Newsletter. We described our project and an update on our progress.

link to our article

On September 9th, We were invited along with the other Israeli iGEM teams to the Technion - Mini Jamboree Event. Here, each team presented their project, and a panel of judges asked questions and gave tips for improvement and better preparation for the Giant Jamboree in Boston.