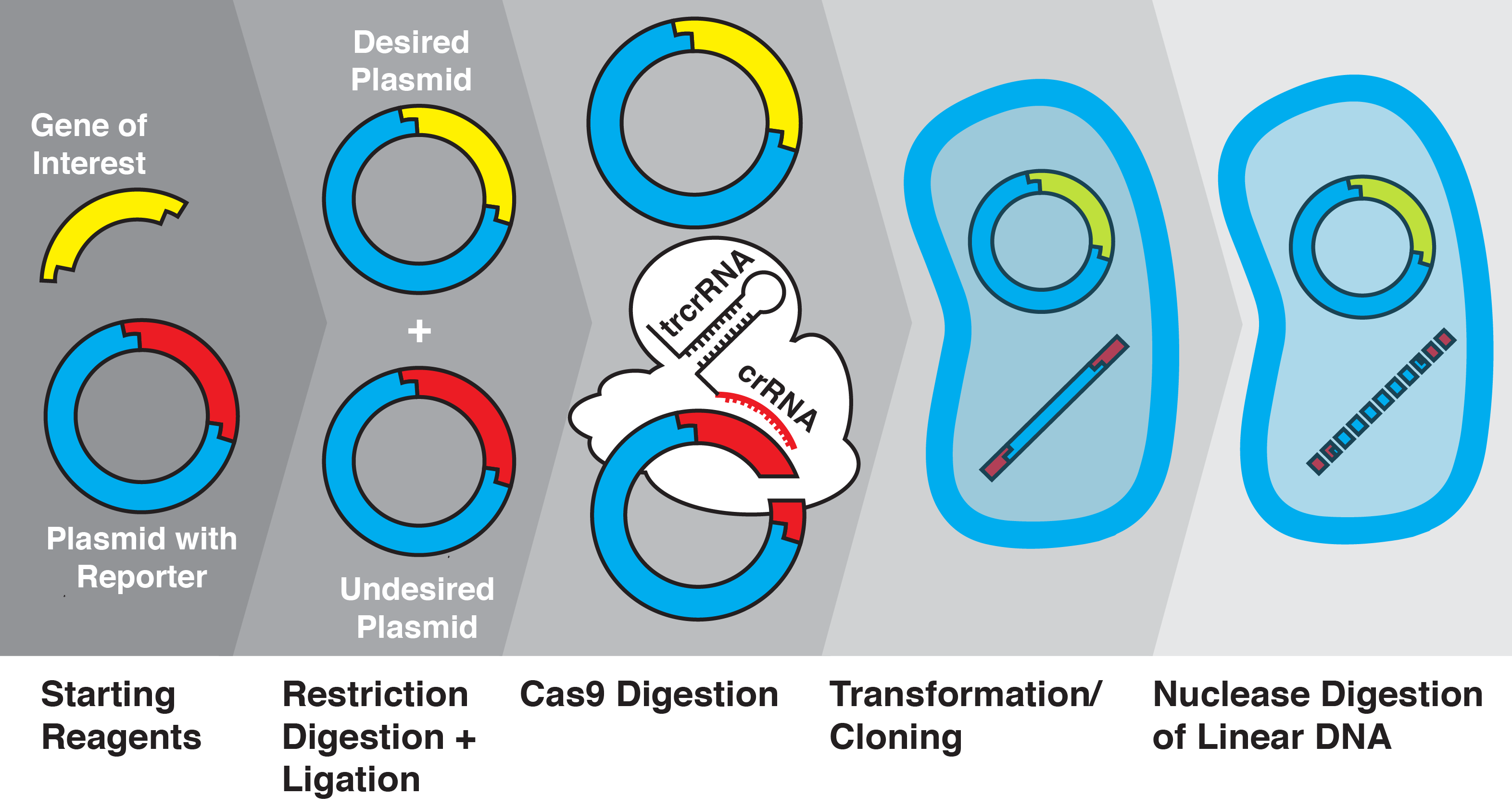 The CRISPR/Cas9 system has revolutionized genome editing by providing unprecedented DNA-targeting specificity. Here we demonstrate that this system can be applied to facilitate efficient plasmid selection for transformation as well as selective gene insertion into plasmid vectors by cleaving unwanted plasmid byproducts after restriction enzyme digestion and ligation. Using fluorescent and chromogenic proteins as reporters, we demonstrate that CRISPR/Cas9 cleavage excludes unwanted ligation byproducts and increases transformation efficiency of desired inserts from 20% up to 97% ± 3%. This CRISPR/Cas9-Assisted Transformation-Efficient Reaction (CRATER) protocol is a novel, inexpensive, and convenient method for obtaining specific cloning products.

We have drafted a manuscript to share CRATER with the greater synthetic biology community, which we are submitting in September 2015. Please refer to this manuscript for complete figures and discussion on the CRATER method.

See our manuscript! To be submitted September 2015

In order to get a better understanding of obstacles that iGEM Teams face during bacterial transformations, we surveyed the iGEM community. Here is what we found. Out of 26 participants from across the globe:

In addition, we inquired why teams had experienced low transformation efficiency. Here is what they said.
We have used CRATER to improve the transformation efficiency of many of our gene products this summer, including genes for the bio-Hydra,P(3HB), and Polystyrene Synthesis teams. The gene that we discuss in our manuscript and below is the FDC gene for the polystyrene team.

We hope that CRATER will be utilized by iGEM Teams in the future to increase the speed and cost of bacterial transformations as well as impact the greater synthetic biology community.

Introduction
We have developed a novel method to increase transformation efficiency.

Molecular cloning is a fundamental technique in molecular biology to produce plasmid constructs. Several methods currently exist to minimize or select against unwanted plasmid products created during ligation of inserts into vectors, including cross-incompatible sticky ends, X-gal blue/white screening, dephosphorylation of backbone sticky ends, the addition of antibiotics, and agarose electrophoresis/gel extraction. However, in special circumstances existing methods may be insufficient to quickly, cheaply, and effectively screen for specific cloning products. The use of antibiotics requires a host strain lacking resistance and the inclusion of genes conferring antibiotic resistance. Genes of interest may include restriction sites that would otherwise be used to create incompatible sticky ends. A plasmid vector also may simply not include multiple restriction sites with incompatible sticky ends. Unwanted byproducts are also difficult to control in situations where blunt ends are used.

We developed a new method for degrading unwanted ligation products using the Cas9 nuclease from Streptococcus pyogenes in a one-pot reaction, enhancing transformation efficiency from 20% up to 97% ± 3%. The Cas9 protein is a component of the clustered, regularly interspaced, short palindromic repeats (CRISPR) system. The CRISPR/CRISPR-associated (Cas) system provides bacteria with acquired immunity by incorporating fragments of foreign DNA and using the transcribed CRISPR-RNA (crRNA) to guide the cleavage of matching dsDNA sequences (Bhaya, Wiedenheft). In type II CRISPR systems, a ternary complex of Cas9, crRNA, and trans-activating crRNA (tracrRNA) binds to and cleaves dsDNA sequences that match the crRNA and include a short protospacer-adjacent motif (PAM) recognized by Cas9 (Gasiunas, Jinek). In type II systems, the crRNA and tracrRNA can be combined into a single guide-RNA (sgRNA) that is sufficient to lead Cas9 to its target (Jinek). Further, the PAM sequence recognized by the S. pyogenes Cas9 is only three nucleotides in length (NGG), allowing this system to be easily adapted to recognize and cut a desired sequence (Mojica).

Figure 1. Overview of CRATER. After ligation, plasmids are combined with recombinant S pyogenes Cas9 and sgRNAs specific to unwanted products. These products are cleaved in vitro into linear DNA, and are transformed along with the uncleaved plasmid. Intracellular exonucleases further cleave the linear DNA, leaving only the desired plasmid intact.


With the knowledge that Cas9 can be used to cleave short (~24 bp) sequences, we investigated whether this system could be adapted to cleave unwanted ligation byproducts. We used the the RFP BioBrick plasmid (pSB1C3) as a starting vector and replaced the RFP insert with various genes of interest using restriction enzyme digestion and ligation, before transforming into Escherichia coli. We then quantified insertion efficiency based on the presence of fluorescent proteins in colonies and culture. We show, for the first time to our knowledge, that Cas9 and sgRNAs can be used to increase molecular cloning efficiency by cleavage of specific ligation byproducts; we call this novel technique CRISPR/Cas9-assisted transformation-efficient reaction (CRATER).

We found that in vitro Cas9 digestion of plasmids significantly (p<0.001) selected against transformation into E. coli, both upon visual inspection and by quantification of percentage of desired colonies on transformed plates. Cas9 cleavage was verified by gel electrophoresis. The use of multiple sgRNAs in a single Cas9 reaction did not appear to interfere with successful target cleavage. 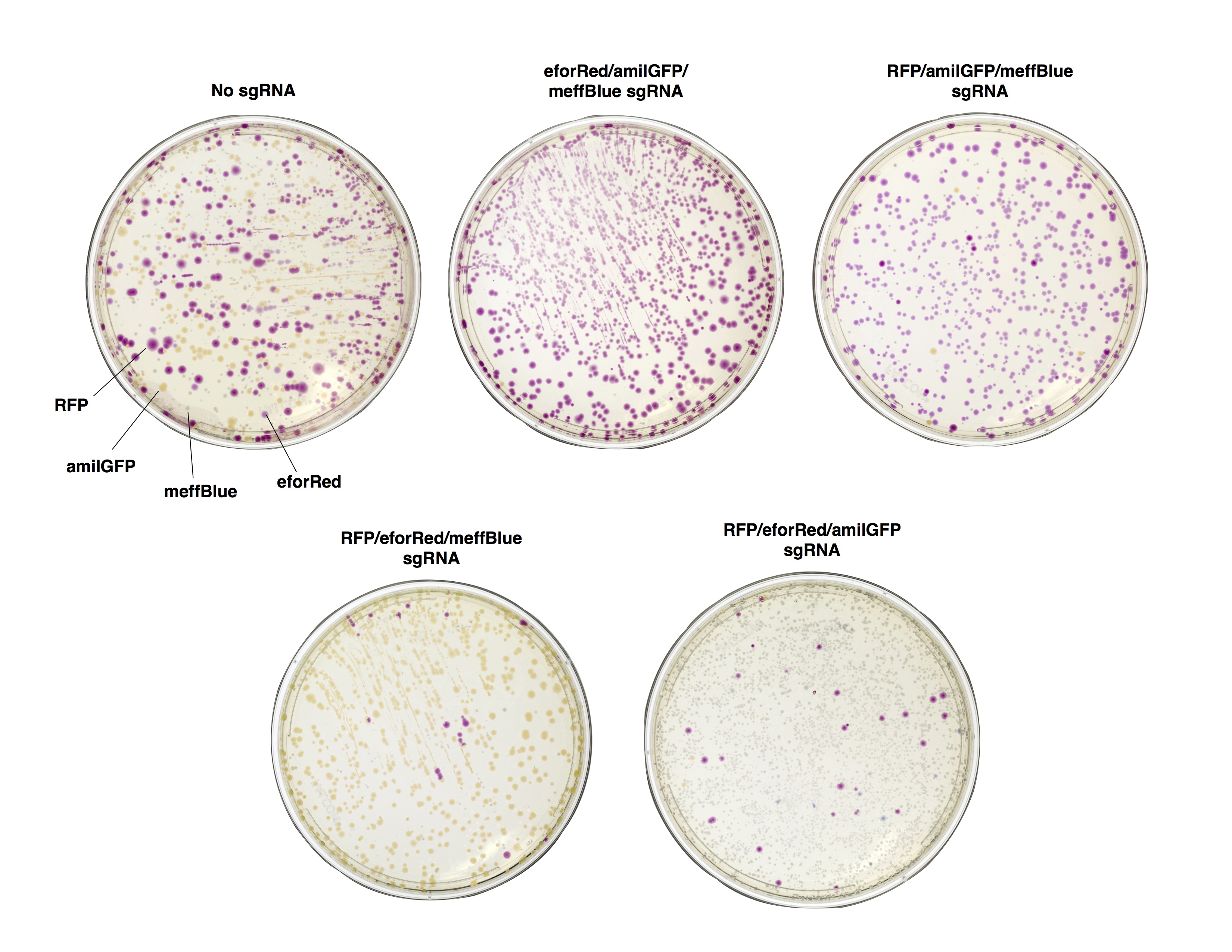 Figure 2. Plates of E. coli expressing color-producing proteins 48hr after transformation with a mixture of four plasmids. Before transformation, the plasmid mix was digested with Cas9 and either a mixture of three sgRNAs, or with a sgRNA-free control (No sgRNA). 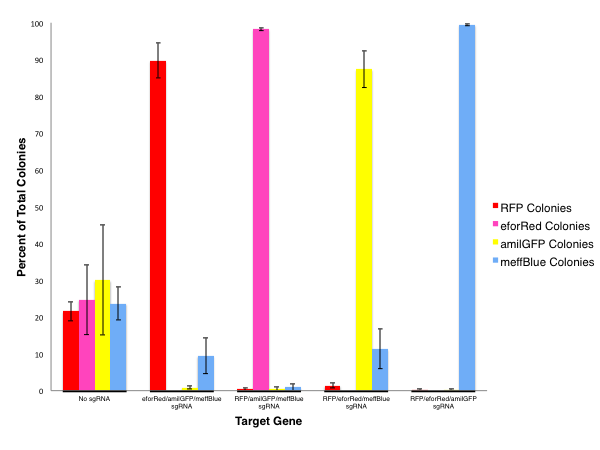 Cas9 cleavage can remove unwanted ligation products
We next sought to demonstrate that CRATER can remove unwanted plasmids created during ligation. As a basic example, we began with a plasmid containing an RFP gene and digested the gene out of its vector backbone with EcoRI and SpeI. We then added a sticky end compatible preparation of the Ferulic Acid Decarboxylase (FDC) gene, a gene that produces no color and represents the target for cloning, into the mix of EcoRI/SpeI digested RFP insert and vector backbone. Since the RFP insert was never removed from the restriction enzyme digestion, we predicted that a significant amount of the vector backbone would ligate with the original RFP insert instead of the FDC gene if CRATER were not utilized.

We transformed E. coli with the mixture of RFP and FDC plasmids subjected to CRATER using RFP-specific sgRNA or a sgRNA-free control. CRATER using RFP-specific sgRNA dramatically increased the percentage of colonies with the desired FDC insert when the transformed cells were plated (Fig. 2). To corroborate this result, we analyzed the same transformed cells grown in liquid culture using flow cytometry. Applying CRATER reduced the percentage of red colonies from 80% to 0.5% in flow cytometry (Refer to manuscript) supporting our solid culture results. Looking at the numbers of successful FDC transformations, using CRATER increased our transformation efficiency from 20% to 97% (refer to manuscript). 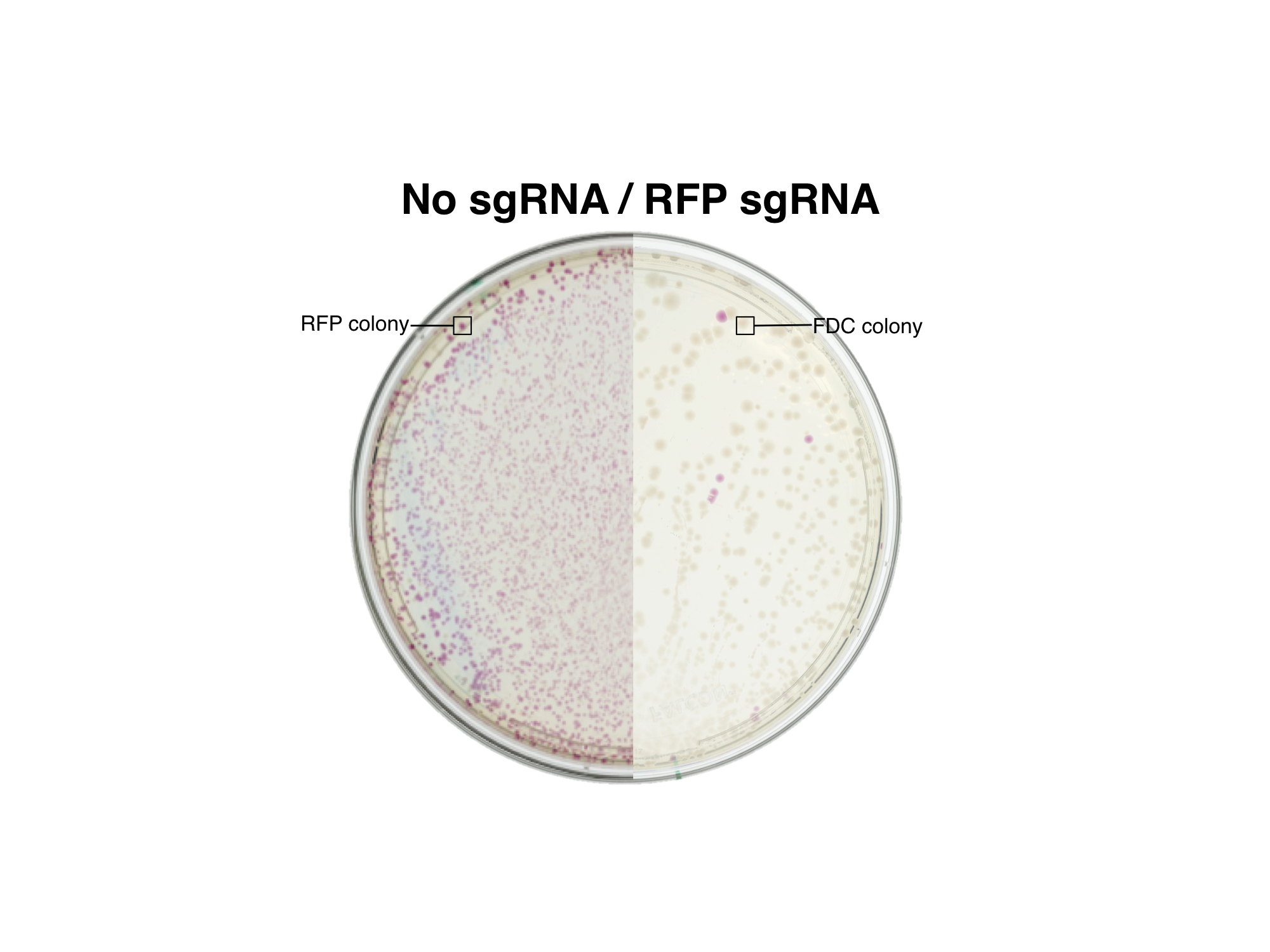 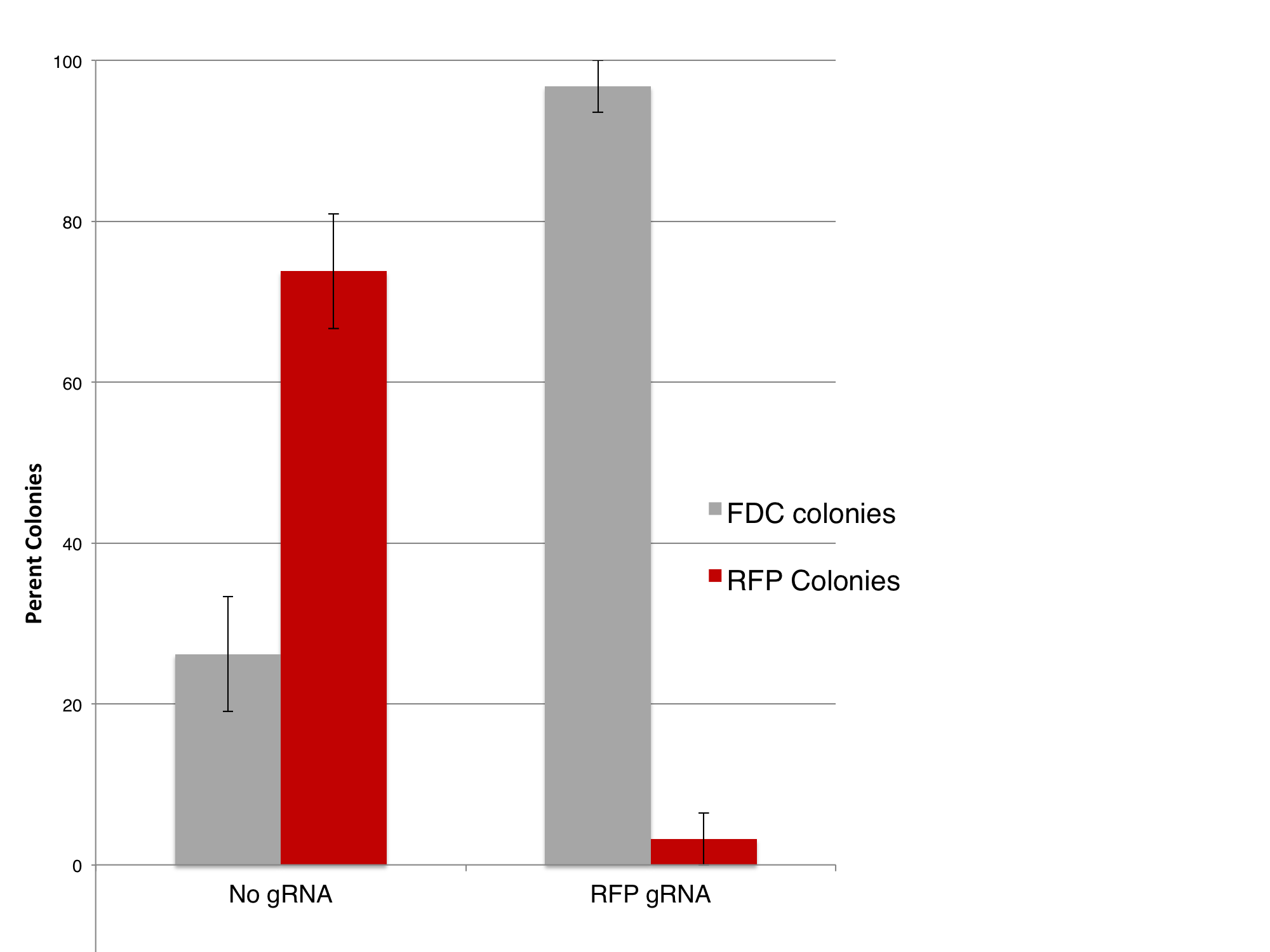 Figure 5. Percentage of total colonies on the plates with each insert, n = 2. Error bars represent SEM, p < 0.0004 according to two-way ANOVA test.

By experimenting with chromogenic and fluorescent protein gene inserts, we have demonstrated the ability of Cas9 to digest and prevent the undesired transformation of plasmids in mixed-ligation pools. This technique is one of the many new applications of the recently discovered CRISPR/Cas system and can be used to augment existing methods for manipulating recombinant DNA.

CRATER will save time when manipulating DNA and constructing plasmids. Particularly in cases when transformation efficiency is very low, such as when transforming large genes (>10 kb) into plasmids, increasing efficiency will reduce the number of colony PCR amplifications and sequencing reactions required to find a colony with the desired insert. In addition to streamlining low-efficiency cloning experiments, CRATER could allow for tighter control of gene order and orientation during multi-component ligations. Designing sgRNAs that target reverse-oriented inserts could facilitate gene orientation control even when restriction enzymes give rise to complementary sticky ends. Moreover, sgRNA specificity could allow for this same level of control when inserting multiple genes into the a single vector. By designing sgRNAs that target unwanted orders and orientations of gene inserts, efficient construction of complex plasmids is made possible.

As Gibson assembly can also be used to efficiently construct plasmids with multiple genes, we wanted to discern whether the CRATER method was comparable to Gibson in terms of time and cost. To this end, we conducted a market study of biotechnology firms including New England Biolabs, Life Technologies, ElimBio, DNA2.0, and Integrated DNA Technologies (IDT). As of August 2015, the market price of a Gibson Assembly Kit was $630.00, with primers pairs ranging from $10 to $30 per pair. The combined market price of sgRNA synthesis materials and Cas9 digestion materials ranged from $708.80 to $874.30, assuming only one type of sgRNA was needed. Each additional sgRNA would cost $47.40. Both Gibson assembly and Cas9 digestion costs are for 50 reactions worth of materials, while the sgRNA synthesis cost is for 15-75 µg of sgRNA. Based on these estimates, CRATER appears to be roughly equivalent in cost to Gibson assembly, and is particularly useful for when fragment termini instability or repetitive DNA sequences prevent Gibson from being used, Gibson primer design results in primer dimer or hairpin formation, or when only one stock sgRNA is needed to prevent a particularly common unwanted ligation product. A good example of this latter case is plasmid backbones with standardized restriction sites, such as the PSB1C3 backbone used in the iGEM BioBrick Registry. This plasmid contains XbaI and SpeI restriction sites, so sgRNAs that target XbaI/SpeI-scarred re-ligated plasmids could be mass-produced and distributed with the standard backbone.

How CRATER can be implemented in future iGEM teams:

Plasmids. All plasmids were obtained from the BioBrick Registry. BioBrick numbers, sizes, and descriptions are provided in Supplementary Table 1.

Fluorescent Measurement. Liquid cultures of transformed E. coli were analyzed using Life Technologies Attune NxT Acoustic Flow Cytometer. An aliquot of 500 µL of each liquid culture was drawn at 12.5 µL/second until at least 500,000 events of cells were collected.

See our manuscript! To be submitted September 2015