The human body has many feedback systems to maintain a suitable environment for its cells. In its simplest form, a homeostatic system consists of a sensor and a response that the sensor can trigger. Our project investigates recreating such a system using E. Coli to determine the robustness and reliability of such an endeavor. Our project has its roots in type II diabetes, when we thought about how people with this disease cannot get rid of excess glucose in their blood naturally. We imagined a system in which E. Coli detect high levels of glucose, and help the human body eliminate it. Most importantly, we decided to try and do this without the use of insulin in any way, due to the insulin insensitivity of the afflicted.

Our sensor is actually a protein that occurs naturally in E. Coli, EnvZ. EnvZ is a protein receptor on the surface of the bacterium. In response to high environmental osmolarity, it phosphorylates OmpR. OmpR-P (phosphorylated) becomes a transcription factor that can bind to a specific promoter, OmpC, and allow transcription of downstream genes.Since a higher glucose level would raise osmolarity, this sensor could allow E. Coli to produce a protein in response to high glucose.

The kidneys naturally reabsorb glucose from the urine to prevent a loss of unused glucose, and then it is stored. For someone with type II diabetes, it gets reabsorbed into the blood, but it can’t be stored. We found two tripeptides which have shown in clinical trials to actually block the proteins involved in reabsorbing glucose in the kidneys. Our plan is to have these peptides controlled under an OmpC promoter so they would be produced when blood glucose is high, and would cause blood glucose to go down.

One major complication was the fact that secreting tripeptides is a much harder task than it would seem. We decided to make slightly larger peptides which are repeating chains of our tripeptides. In a second cell, we can have a protease which cuts between our repeats. This protease would be under a constituent T7 promoter so it is always available, and will be bound to the membrane to prevent it from interfering with the cells. The whole system can be implemented in microcapsules with pores small enough so that the tripeptides and glucose can diffuse in and out, but the protease or any immune cells can’t. Below is the full model for our system. 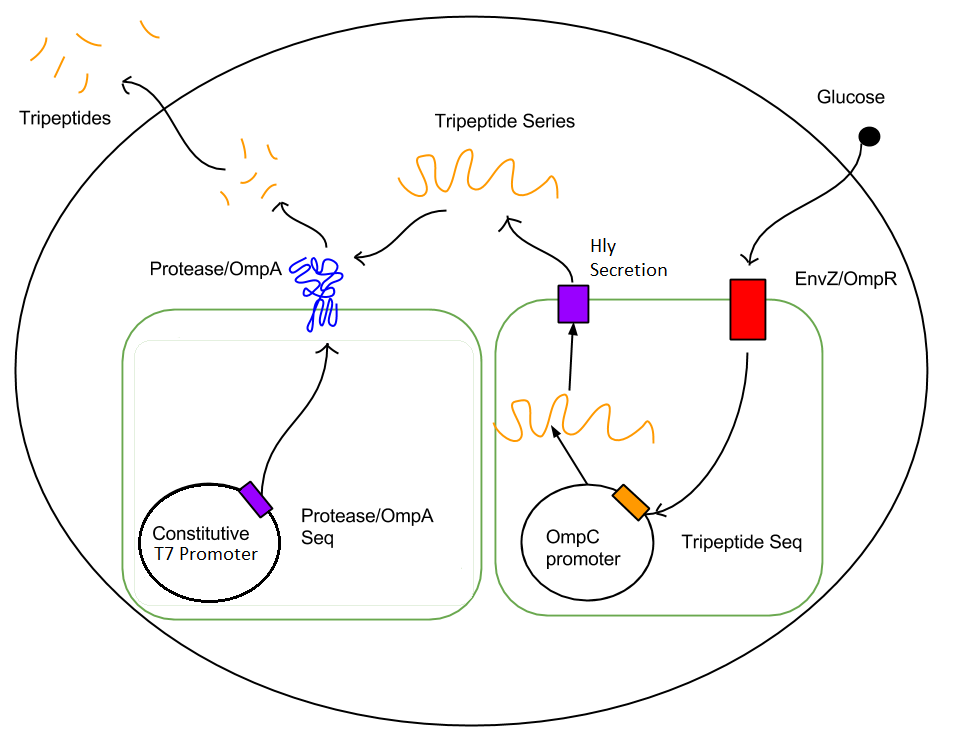