Environment has been a track in iGEM for many years of the competition. Projects that tackle environmental issues have been popular since the first biosensor projects started to appear in the 2006 iGEM competition. Teams have been inspired to work on solutions to problems in their local area, such as the UBC in 2011 and Colombia in 2012. These teams were inspired to tackle massive environmental problems that are unique to their regions. Learning about these problems and how passionate teams can be to find solutions is one of the great parts of the iGEM competition.

You will find images and abstracts of the winning environmental teams from 2011 to 2013 in the page below. Also, follow the links below to see projects from all the Environment track teams.

TU-Munich (also first runner up at the World Championships)

Project abstract: The contamination of aquatic ecosystems with multiple anthropogenic pollutants has become a problem since the industrial revolution. Antibiotics, hormones and various noxious substances threaten environmental health and are not effectively removed by conventional waste water treatment.

We propose to employ transgenic plants which produce effectors for enzymatic degradation (BioDegradation) or specific binding (BioAccumulation) of pollutants. The autotrophic, sedentary, aquatic nature of the moss Physcomitrella patens makes it an ideal chassis for a self-renewing, low-maintenance and cheap water filter. A light-triggered kill switch prevents unintended environmental spreading by limiting viability to places where the spectrum of sun light is appropriately filtered. Furthermore, we have developed a device to implement this biological filter in an aquatic environment, investigated the application of this new technology and examined its economic feasibility. Based on our results, PhyscoFilter may become a game-changing approach to improve global water quality in an affordable and sustainable fashion. 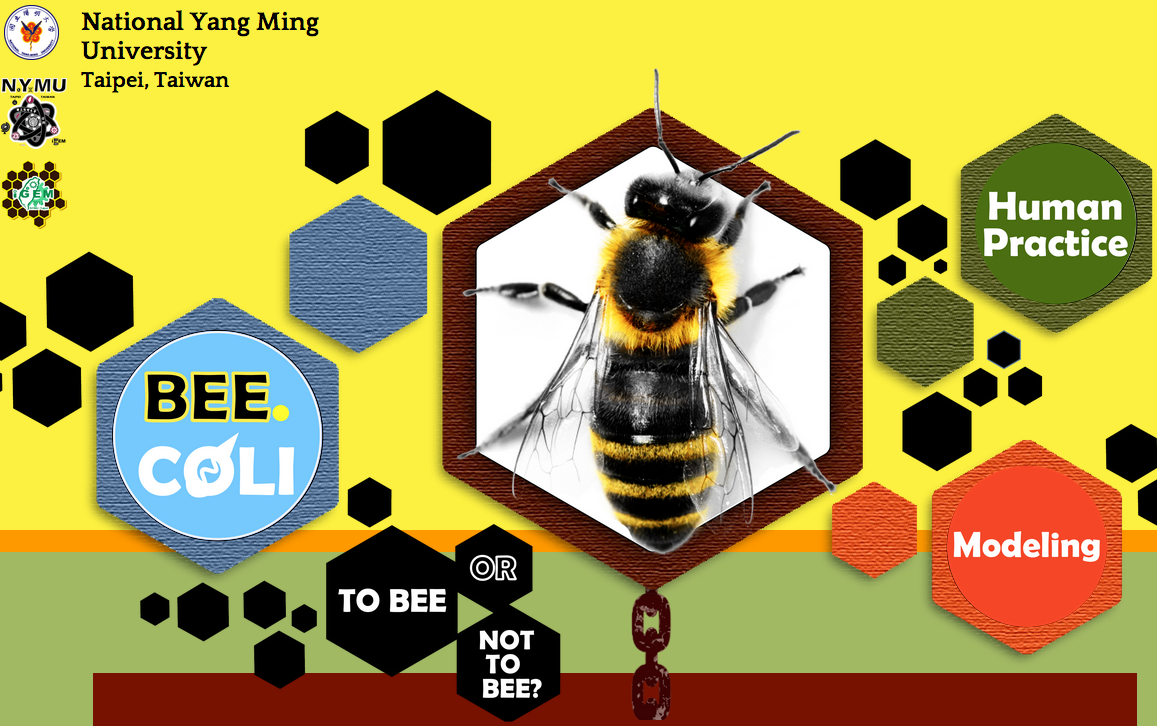 Project abstract: To save bees from Nosema ceranae, the culprit of colony collapse disorder (CCD), we created Bee. coli. from E. coli K-12 MG1655, a bacterium residing natively in bees. Bee. coli is strategically designed to work as follows. First, it continuously secretes mannosidase to inhibit the sprouting of N. ceranae spores. Second, if the bee is infected, the fungus-killing-circuit with a positive feedback design will be turned on to wipe out N. ceranae. Third, if these designer weapons should fail to conquer N. ceranae, our designed bee-suicide-operon will be activated to kill the infected bee and save its companions. Fourth, a light-inducible lysis system is included to ensure our Bee. coli only lives inside of the bee. Fifth, we apply encapsulation as the way to send Bee. coli into the bee. Since the capsule will only dissolve in a bee’s gut, our Bee. coli will not spread to the environment.

Project abstract: Many synthetic biology projects propose the application of Genetically Engineered Organisms (GEOs) in natural environments. However, issues of biosafety and ethics constrain the use of GEOs outside the lab. A primary concern is the Horizontal Gene Transfer (HGT) of synthetic genes to natural populations. Strategies developed to address this problem provide varying levels of containment, however, the substantial elimination of HGT remains difficult or perhaps impossible. We have developed a new containment system to expand the range of environments where GEOs can be used safely. To do so, we rely on three levels of containment: physical containment with alginate capsules, semantic containment using an amber suppressor system, and an improved killswitch featuring delayed population-level suicide through complete genome degradation. We aim to raise the issue of biosafety by engaging the general public and scientific community through debate, and to advocate the discerning use of biosafety circuits in future iGEM projects. Winning Environment project 2011

Project abstract: The University of Calgary's iGEM team is working on developing an electrochemical biosensor for Naphthenic Acids (NAs). NAs are toxic surfactants released into tailings ponds as a by-product of the bitumen extraction process of oil sands. Microorganisms indigenous to tailings ponds that are uniquely capable of degrading NAs suggest that bioremediation may be a viable solution. To be successful, however, levels of NAs need to be monitored and existing methods for detection are costly and offsite. Using two NA-degrading organisms relatively new to iGEM: microalgae and pseudomonads, we used bioinformatics and a novel NA affinity-based screen in an attempt to identify a sensory element. In the process, we have characterized an electrochemical reporter system and built a working measurement device. We have also submitted new parts for future work in microalgae, as well as novel parts to move constructs between Pseudomonas and E. coli.