The Health and Medicine track in iGEM gives teams the opportunity to tackle some of the most exciting problems in synthetic biology. Depending on who you ask, it costs between $800 million to - 3.5 billion US dollars and about 14 years to bring a drug to market. Being as the human genome was only sequenced in the year 2000, one could expect the first drugs to come to market this year based on human genome sequencing technology. While this may or may not happen in 2015, the opportunities for medical technologies based on genetically engineered human and bacterial systems cannot be understated.

iGEM teams have access to many great advanced techniques and have the potential to make significant progress towards developing new therapy and drug concepts. Unencumbered by conventional drug discovery paradigms, teams can decide they want to engineer cancer detecting systems into E. coli using organisms instead of molecules. Bacteria have a small but significant computational ability that allows iGEM teams to create sensing systems using logic to process multiple cell surface or chemical sensing inputs.

Recent Health and Medicine projects to win best in track

Project abstract: Cardiovascular disease (CVD) has been the leading cause of death in the United States for over twenty years and is a rising global health issue. Recent studies demonstrate a correlation between CVD and atherosclerosis, the buildup of plaque in the arteries. One associated risk for atherosclerosis is the production of Trimethylamine N-oxide (TMAO) by natural gut flora when metabolizing L-carnitine, a chemical found primarily in red meat and energy drinks. We created a probiotic to attack the root of this problem by outcompeting the gut bacteria for L-carnitine in order to suppress the production of TMAO. L-carnitine transporters (caiX and cbcWV) and L-carnitine dehydrogenase (CDH) derived from Pseudomonas aeruginosa were expressed in a safe strain of E. coli (Nissle 1917). This engineered E. coli can uptake and metabolize L-carnitine along an alternative, safe pathway into 3-dehydrocarnitine. Together, this system offers a novel solution in preventing TMAO-related cardiovascular health conditions. 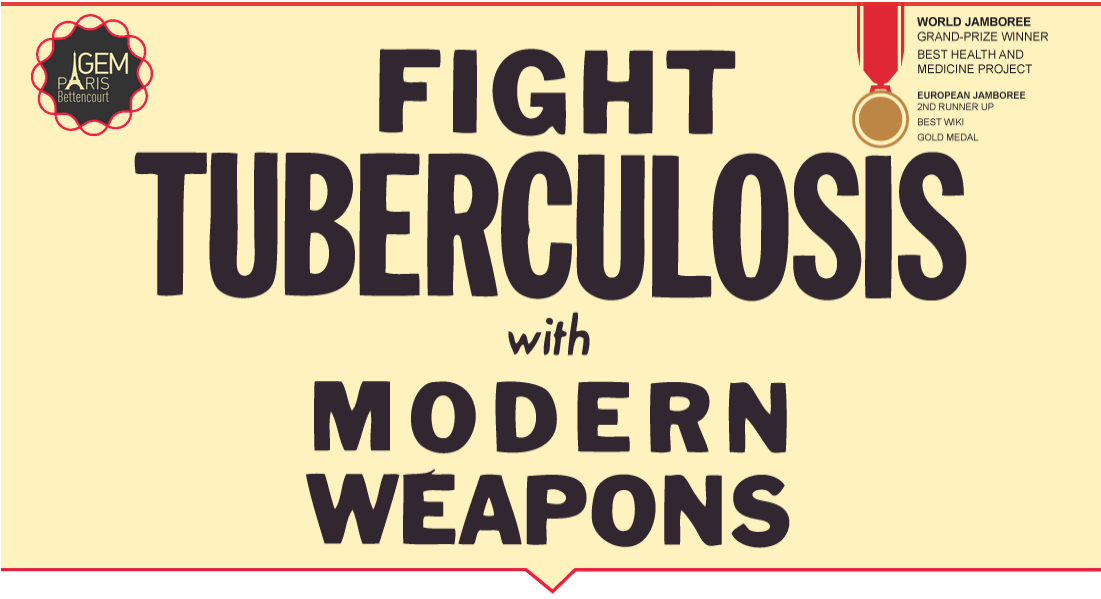 Project abstract We are testing new weapons for the global war against Mycobacterium tuberculosis (MTb), a pathogen that infects nearly 2 billion people. Our 4 synergistic projects aim to help in the prevention, diagnosis, and treatment of tuberculosis. 1) We are reproducing an essential MTb metabolic pathway in E. coli, where it can be easily and safely targeted in a drug screen. 2) We are building a phage-based biosensor to allow the rapid diagnosis specifically drug-resistant MTb strains. 3) We are constructing a mycobacteriophage to detect and counterselect drug-resistant Mtb in the environment. 4) We are programming E. coli to follow MTb into human macrophages and saturate it with bacteriolytic enzymes. We want to vanquish tuberculosis and build a TB-free world.

Project abstract : Currently, biological drug-based therapies require periodic invasive application. Often, due to their systemic administration, adverse effects are observed. Furthermore, large quantities of these substances are needed because of their distribution throughout the body. This, coupled with expensive production and especially purification, imposes a great burden on health systems. We aim to develop a safe and cost-effective biological delivery system for biopharmaceuticals, which would increase the quality of patients' lives, because it would minimize the number of required procedures. This type of delivery system would increase patient compliance to the therapy while the local administration will reduce the side-effects associated with current treatments. We plan to design the mammalian cells-based delivery system to be regulated by the digital logic from the outside.

Project abstract: Current medical practices are only able to scratch the surface of tissue engineering or organ development. Fortunately, nature has provided us with robust, cellular systems capable of governing the autonomous formation of complex structures. To pursue control of multicellular systems, we engineered a number of ligand-receptor signaling mechanisms: the Notch-Delta juxtacrine signaling pathway and an assortment of G-Protein Coupled Receptors. Both signaling systems were modified to activate orthogonal genetic circuits, allowing for processing and integration of numerous signals. In order to facilitate and maintain pattern formation, we introduced cadherin, a natural intercellular glue. To understand and predict multicellular behavior, we developed a simulation framework based on the Synthetic Biology Open Language and CompuCell 3D modeling environment. Our models motivated several circuit designs we subsequently tested in the laboratory. Altogether, our developments establish a paradigm for manipulation of intercellular communication systems to drive self-organization of tissues.