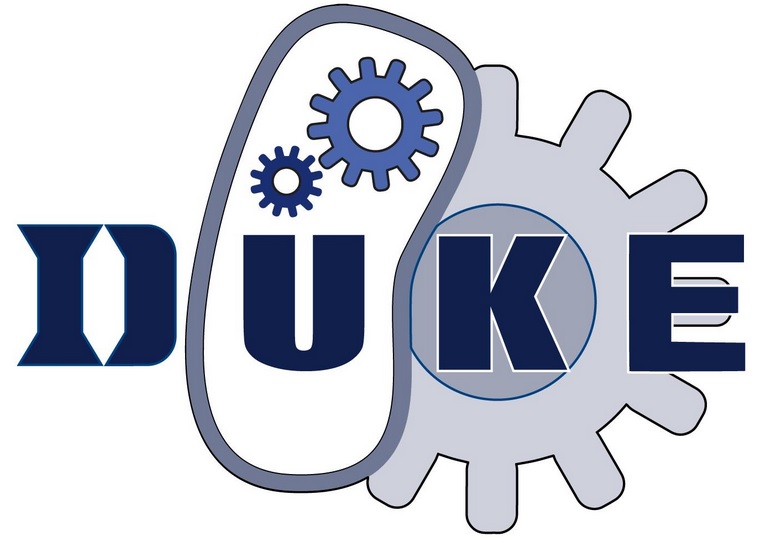 When a cell makes protein, it is easy enough to leverage the protein itself to see if the gene to make it is present. However, in all genes, the common component in the genetic code that makes it up. Is it possible to leverage the ease and predictability of nucleic acid interactions to better screen for proteins? Is it possible to signal for non-coding and knocked-out DNA sequences. In dCas9, we saw a system.

With dCas9, Duke iGEM 2014 saw an effect we called decoy binding where a fixed concentration of dCas9 will be lured away from a reporter gene by the presence of the same sequence elsewhere in the cell. As the number of decoys increases, the repressive force of dCas9 weakened on the reporter gene. In this phenomenon, we saw rudimentary signally based not on protein concentration but on DNA concentration. We saw that this behavior was worth investigating both at a basic level and then for use in applications.

We at Duke iGEM saw an opportunity of leverage the phenomenon of dCas9 decoy binding, studied as last year’s project, to directly signal the presence or absence of a set genetic sequence into the induction of a gene on a different operon. We hope that this construct allows for more versatility in recognizing a gene or non-coding region in the creation of more complex gene circuits. In order to highlight the capabilities of the circuit, we wanted to use it in the context of one of the most dangerous gene developments in modern history: antibiotic resistance.

One of the greatest discoveries since the germ theory of disease was the discovery of chemicals that could counter them. Penicillin and other drugs helped save countless lives and revolutionized the way we saw sickness. But in 1947, four years after the initial mass-production of penicillin, the first resistances began to appear. Already, certain drugs like penicillin have fallen out of medical utility. The problem is only expected to become worse with fewer antibiotics being developed and resistance occurring for these drugs faster and faster. The CDC reports MRSA, multidrug-resistant tuberculosis and other antibiotic resistant bacteria kill 23,000 a year[1] in the US alone.

The reason for this spread is obvious, with each dose of antibiotic putting massive selective pressure on the antibiotic gene. Especially when an antibiotic regiment is left uncompleted, those bacteria resistant to the antibiotic will survive to repopulate. With each prescription of antibiotics, this effect is repeated until full populations are filled with the resistance. Non-medical antibiotic usages within agricultural waste and cleaning products have only exacerbated the problem.

But what if the game of growth rates was shifted to favor the non-resistant bacteria? Naturally, the favored solution would be to also kill antibiotic resistant during treatment, but until then, the next best solution may be a weaker and continual pressure targeting these genes themselves. This pressure will give the antibiotic susceptible bacteria an opportunity to regain a majority of the population between antibiotic treatments. These slow “resets” could buy time for the development of new drugs or allow for the recycling of old drugs previously left ineffective.

We attempt to provide a negative selective pressure through the induction of programmable cell death genes. We hope to produce a plasmid to transform, conjugate, and in the future transfect into bacteria that provides the necessary machinery for limiting the populations of only antibiotic-resistant bacteria. In this first stage of our project, we find a suite of programmable cell deaths in order to find a gene both effective on bacterial populations while maintaining complete safety for eukaryotic and especially human cells.

Cas9 is a protein originally from within the Streptococcus pyogenes immune response system. Cas9, with the Clustered Regularly Interspersed Palindromic Repeats (CRISPR) and other CRISPR-associated proteins were initially used to respond to known pathogenic genetic information. In its native form, it will cut the invasive protein at recognized spots before it can incorporate into the bacteria. Fragments of new viral DNA is saved into a library of DNA fragments which is the CRISPR, named after the repeated loop structure between each fragment. Once these are transcribed and processed, the construct of copied nucleic acid sequence and loop is known as a short guide RNA, or gRNA.

However, because of the ease and predictability of the targeting, the protein has been used as a useful and controllable DNA targeting construct. This level of control has been honed in by modifying the protein to only cut one strand. These nickases require two successful Cas9 landings to fully cut the DNA. Additionally, functional groups such as transcription activators and repressors have been attached to make a deactivated Cas9 protein (dCas9) a programmable activator protein. Because the wide variety of CRISPR systems in bacteria, multiple independent systems can be implemented in the same biological chassis.

From this, Duke iGEM has had an interest in a phenomemon associated with dCas9 called CRISPR interference, where the presence of the large dCas9 protein blocks the RNA polymerase from continuing, knocking down transcription rates.[2] Our project incorporates many of the findings present in this paper. The paper finds that cumulative repression of multiple gRNA binding sites is stronger than additive, but not quite as strong as multiplicative. The paper also found that targets farther down the gene from the promoter feature weaker repression.

Building off these results, we attempted to look at what happens if multiple sites compete for the same gRNA sequence. As would be expected, the more decoy sites that are present, the weaker the repression on the reporter sequence. We theorized that the effect was due to a molecular titrating effect where the new binding sites remove the dCas9 from equilibrium from the reporter sequence.