No Sidebar - Arcana by HTML5 UP

"We can do things the cheap way, the simple way, for the short-term and without regard for the future. Or, we can make the extra effort, do the hard work, absorb the criticism and make decisions that will cause a better future” (Mike Rounds [1]). Synthetic biology is one area that is highly affected by this point of view. The technology is a two-edged sword with the ability to save and improve many lives or to place the lives of many into danger, perhaps irreversibly. Those involved in it have the responsibility to ensure that their decisions consider not just the economic benefit of a potential solution but also the moral implications and the health and environmental impact that could arise.

The debate on whether this technology can be implemented safely rages especially fiercely in the realm of food production. Although the world seems to be headed in the direction of accepting genetic engineering, it is apparent that it will be a process that will take many years, continued research on both the potential benefits and safety of the technology, and the development of regulations to help guide its use. The extension of current standards to include genetic engineering is an issue that is constantly debated. One such standard is the GRAS standard which stands for generally regarded as safe. It is of particular importance to our project as it deals with the dairy industry which does allow for the use of microbes in food production but has yet to allow their genetic modification.

To date, no genetically engineered starter cultures have been approved for use in the USA by the FDA, and specific criteria for approval has yet to be established [2, 3]. This lack of approval is commonly attributed to a lack of consumer knowledge and understanding [3]. Because of the countless foreseeable benefits using genetically engineered starter cultures and the amount of increased potential profits in industrial cheese production, scientist continue research into the area and remain optimistic for future approval [3]. Generally recognized as safe (GRAS) is a status given by the USDA for allowable food additives. L. lactis is a GRAS organism, having FDA approval for food-grade applications [4]. Because the promoters and all subsequent genetic elements incorporated within this project are of lactococcal origin, it is a reasonable assumption that they should rationally meet the requirements of being considered GRAS, making this a promising model for P335 lytic phage detection and defense in future approved genetically engineered starter cultures [4]. 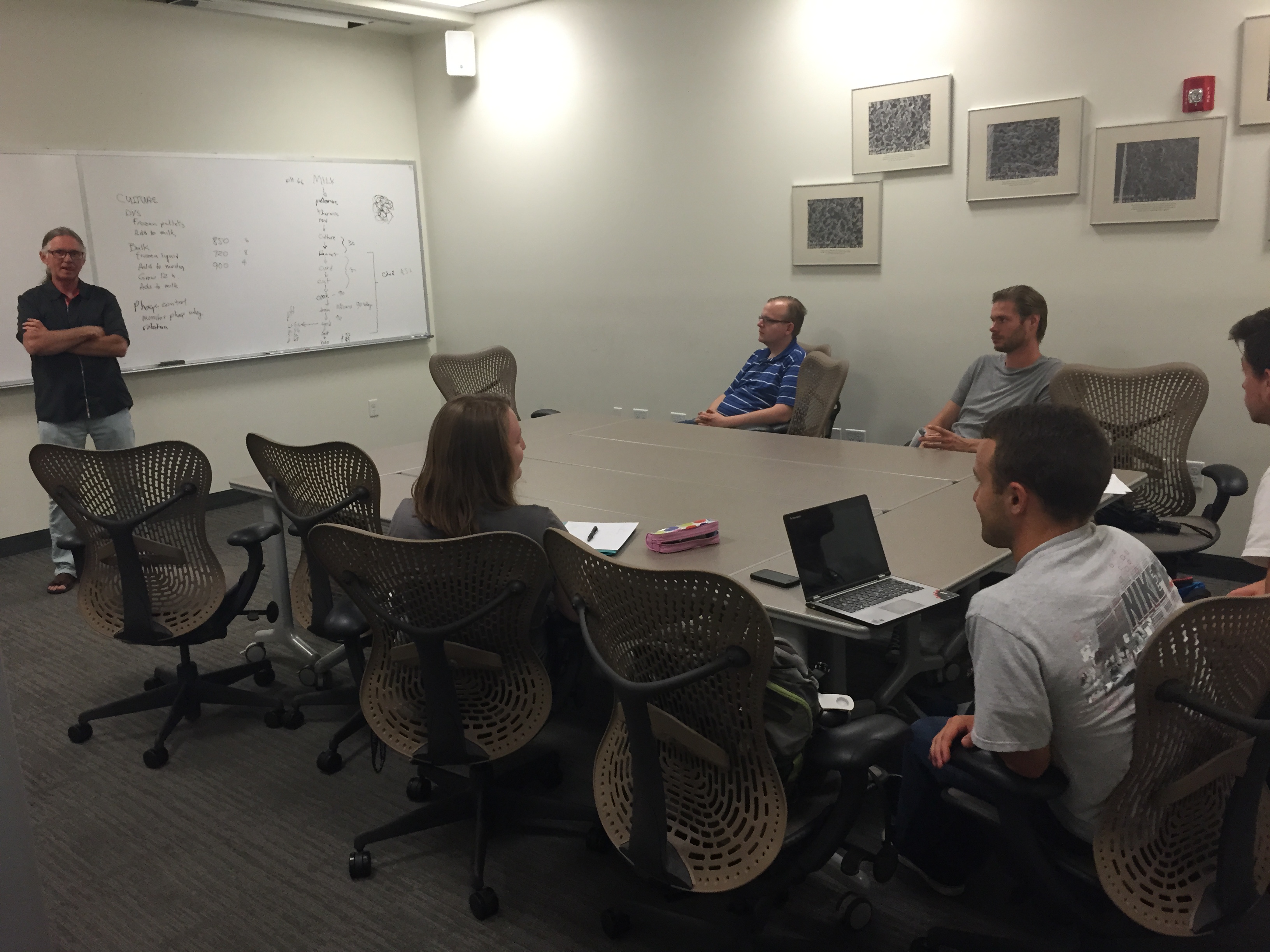 The USU iGEM team met with Carl Brotherson, Associate Director of the Western Dairy center to learn more about the cheese-making process. Carl is very familiar with methods and techniques of the production of cheese. During the meeting Carl explained different types of bacteria used and various methods of creating different types of cheese. Carl specifically noted stages of the process where phage infection becomes a concern, which is where the iGEM project should come in handy: preventing phage from ruining a batch of cheese. He also spent some time describing GRAS and how these standards affect what can be done about preventing phage from infecting cheese starter cultures. After the information session Carl also gave a tour of the facilities and explained the different machines used in the factory.

After speaking with industry, the team met together to discuss how this new insight might impact our original set of goals. Initially, the plan of attack was to create an engineered strain of L. lactis that integrated our fluorescent response with an autolysis cassette, both induced by proteins native to the Φ31 bacteriophage. But it became clear that having each of these components separately constructed would give us the ability to independently test them and determine if one was a more efficient solution than simply combining them.

Equipped with our outreach video, we now have a tool to help engage the public and discuss how genetically modified organisms have the ability to impact and enrich their lives in a positive manner. Breaking down the language barriers between synthetic biologists and the public is the first step in allowing a meaningful conversation about our scientific discipline. The Utah State Video Challenge aims to do just that. By creating collections of videos that deconstruct complex topics, we can ignite this educational process with fewer barriers to entry than ever before. Building upon previous endeavors such as The Flame Challenge with Alan Alda and the news website Reddit’s ELI5 (Explain Like I’m 5) page, we proposed to solicit other iGEM teams in order to develop videos to explain synthetic biology at its most basic level. From this effort we hope to excite professionals in other scientific fields who can initiate their own informal competitions to open up the black boxes of their field of work and make this knowledge freely available to the public, especially our youth. Please watch our video linked here to view our first “challenge”. USU Video Challenge 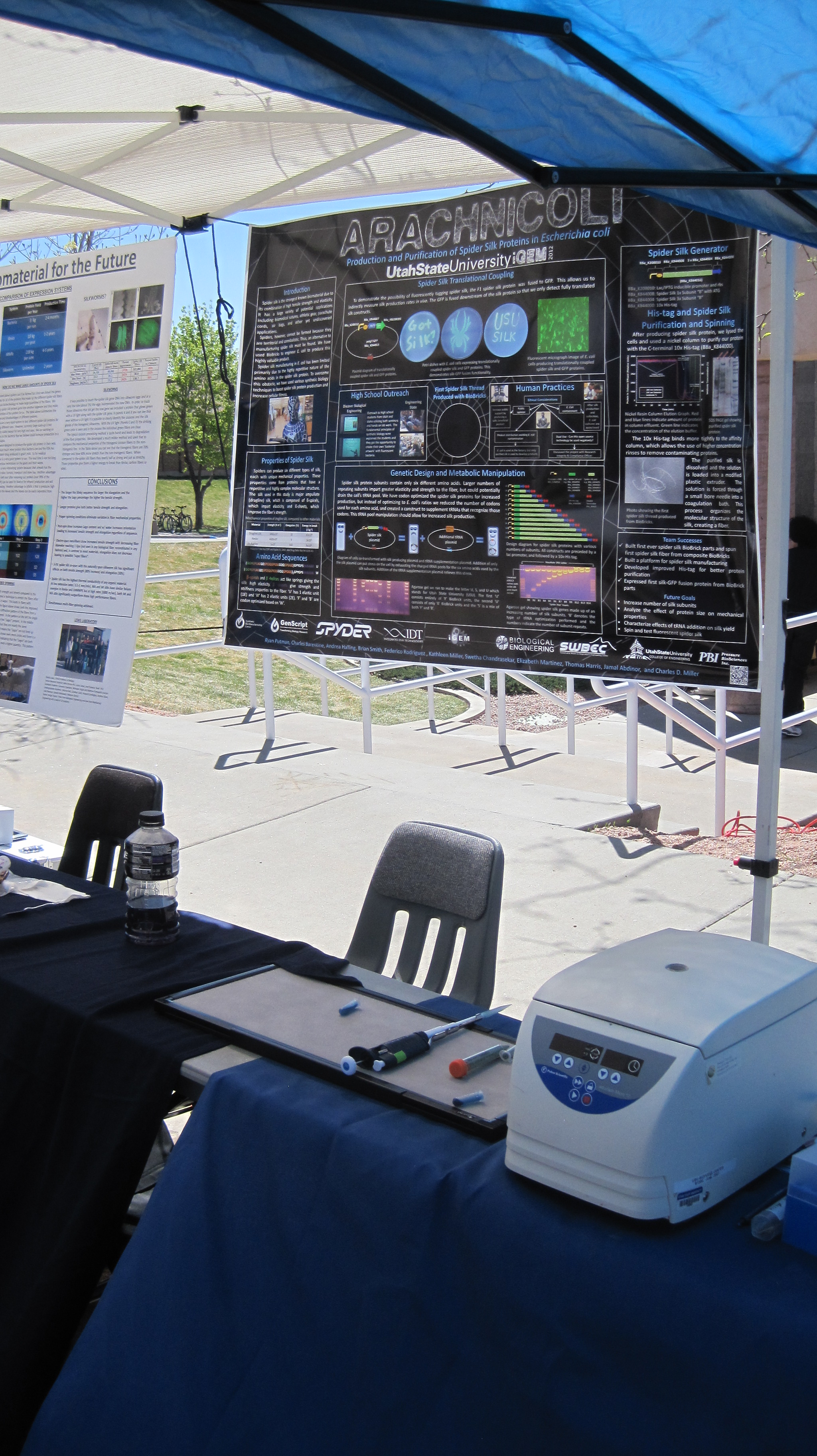 Elementary, Middle School, and High School Students from the 4 corners area of Utah, Arizona, Colorado, and New Mexico were able learn about iGEM as part of the STEAM Expo, at Utah State University’s Blanding Campus. STEAM stands for Science, Technology, Engineering, Art and Mathmatics, and is a program that fosters young development of students in research and industry. A large portion of these students were Native American, exploring their options and interests in the many disciplines of higher education. Attendees traveled hours, some driving by bus from their reservation, and over one thousand participants gathered at the USU Blanding Campus for the two day Expo. Students learned about technical jobs, new technology, Native American culture, and pathways to university programs. At a booth representing the Utah State University, Logan Campus, undergraduates were able to present their work in Biological Engineering and Civil Engineering. At this booth, the main topic presented was the application 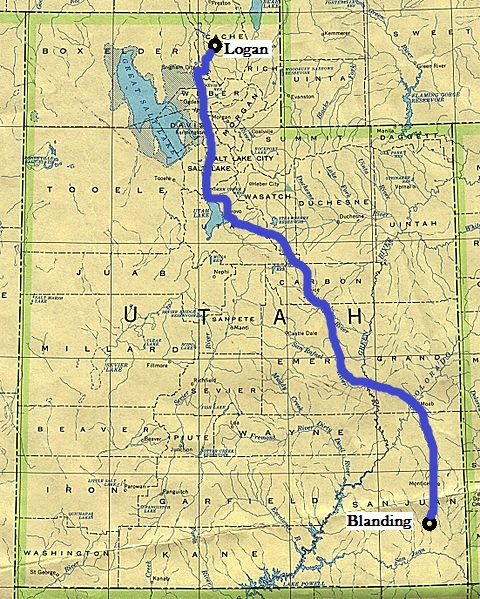 of synthetic biology. Research and the accomplishments of former USU iGEM teams were the main attractions, and the scope of the iGEM competition was used to explain the wide development of genetic engineering at high school and undergraduate levels.

This event is hosted annually, and is a boon to inspiring young minds to pursue higher education. Attendees are from very rural towns, who are otherwise closed off from personal access to mentors and specialized education programs. The population of Blanding, UT is just 3,500 people.