No Sidebar - Arcana by HTML5 UP

An important part of our project was to assess the functionality of constitutive promoters and fluorescent reporter proteins that are expected to work well with Lactococcus lactis bacteria. We approached this as a modified form of the InterLab Study for promoters that functioned both in L. lactis and Escherichia coli. 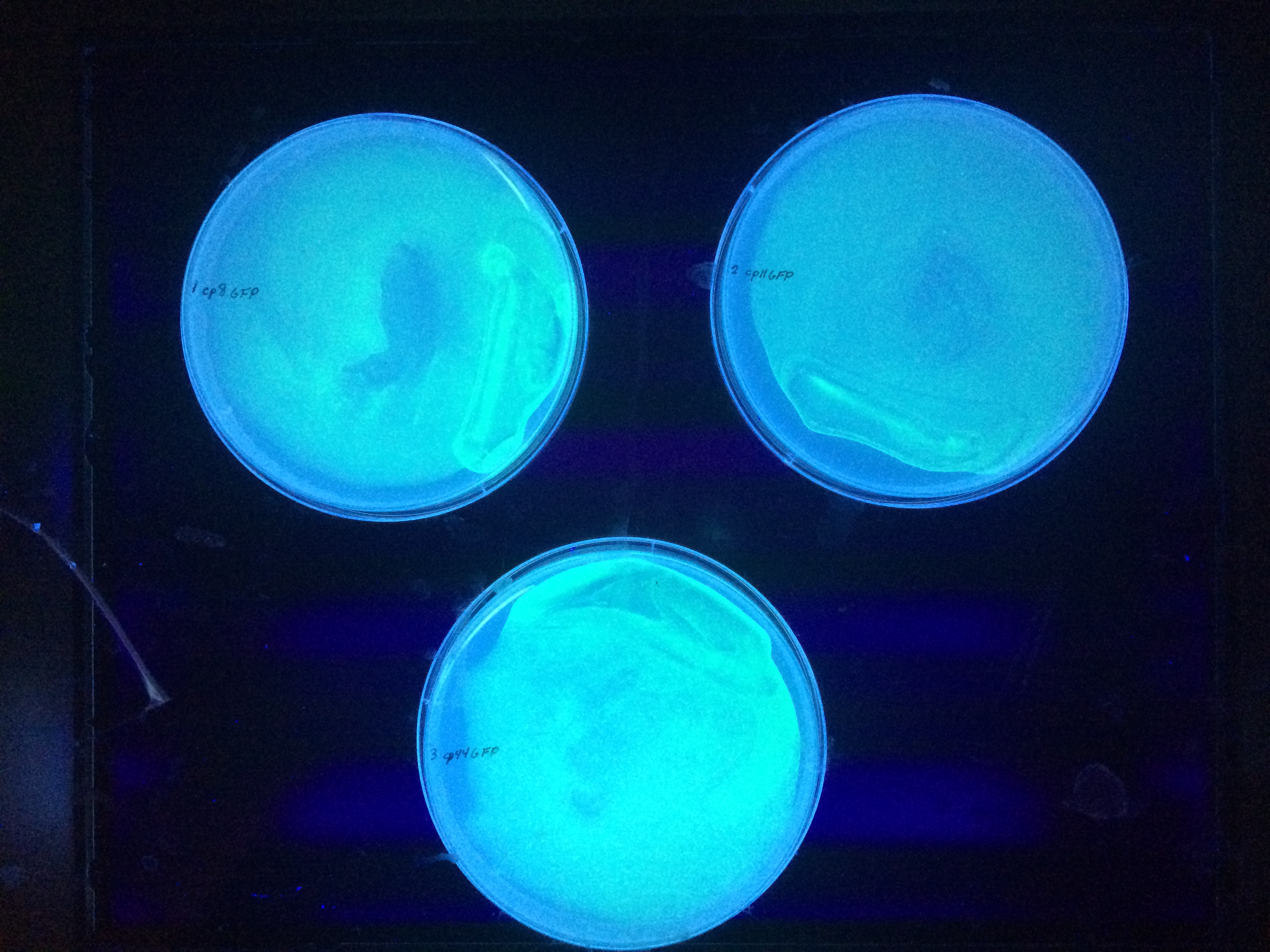 Three constitutive promoters with different strengths were chosen and synthesized based on Peter Ruhdal Jensen and Karin Hammer's library of synthetic promoters for Lactococcus lactis. All of the promoters were based on a consensus sequence found in L. lactis. In the Jensen and Hammer study, the promoters were characterized by β-Galactosidase production in both E. coli and L. lactis. While the promoters worked well in both organisms and there was some correlation between strength of activity in each organism, the promoters expressed many differences in functional strength when moved between organisms. For the promoters we chose to work with, expression in E.coli for CP8 was relatively weak, CP11 was a slightly stronger promoter, and CP44 was a fairly strong promoter. In L. lactis CP44 was the weakest, then CP11, and strongest promoter activity was observed from CP8. Overall, the promoters tended to function more weakly in E. coli, though it was suggested that this was due to the particular compound being synthesized and measured in the study rather than the promoters themselves [1]. As such, we wanted to study the strength of a few promoters with a different reporter protein. 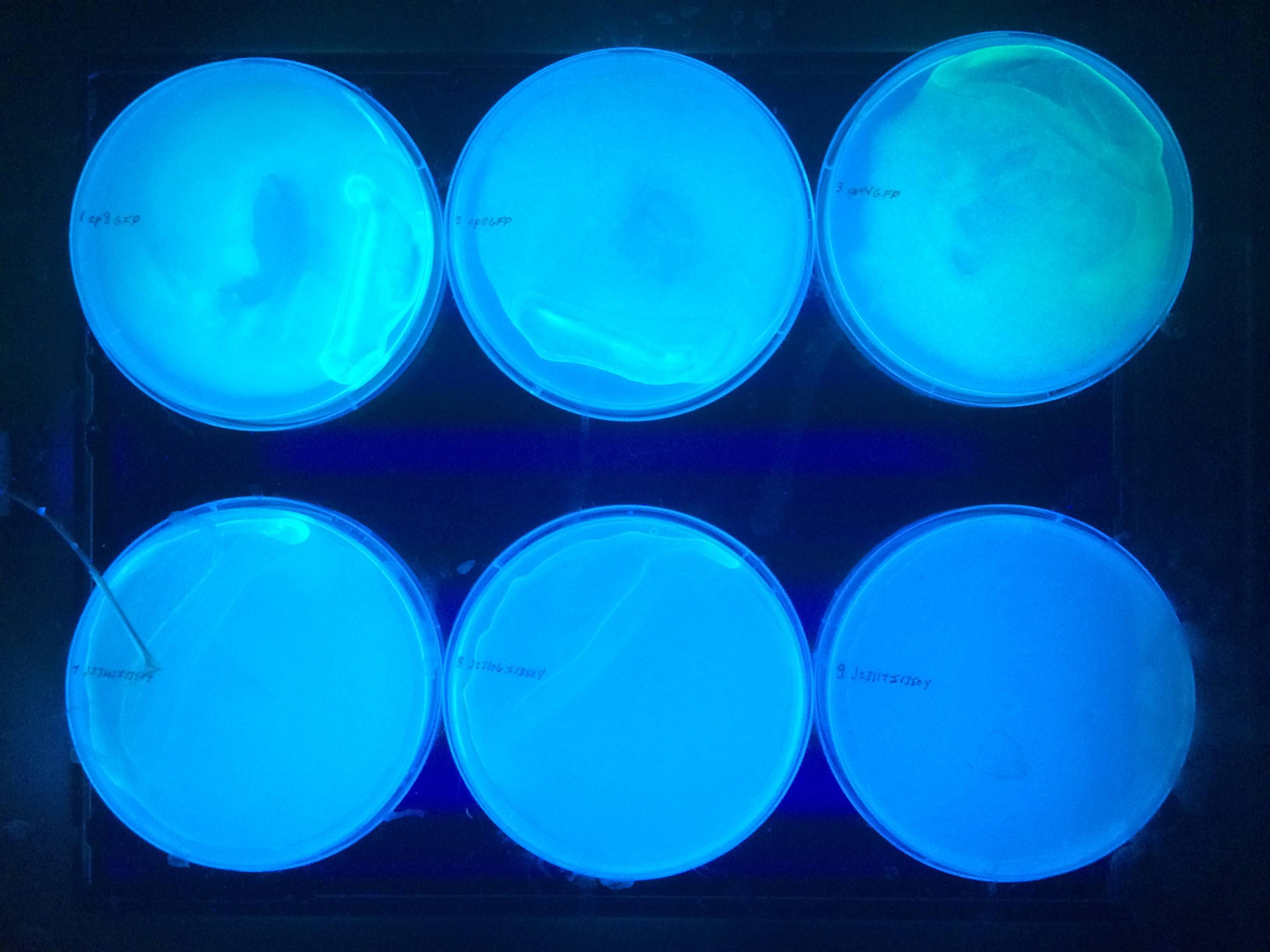 The reporter proteins that were chosen for our study were two strong fluorescent proteins codon optimized for organisms other than E. coli (see Figure 1). The first was a “superfolder” GFP with codon optimization specifically for Bacillus subtilis. We refer to this protein as sfGFP(Bs). Although the protein was codon optimized for B. subtilis, previous studies indicated that it gave the highest fluorescence signals in Streptococcus pneumonia and L. lactis, and as such, was deemed suitable for our study [2]. Even when grown in E. coli, this protein gave brighter fluorescence than the standard GFP. The second fluorescent protein was an mCherry protein codon optimized for Lactobacillus reuteri. mCherry is a fairly popular red monomer protein that matures very quickly and is highly photostable [3]. As an added note of interest, both of these fluorescent proteins are meant to be used in our L. lactis project as reporters for phage infections in dairy cultures.

Each fluorescent protein was successfully paired with each constitutive promoter in a sequence consisting of the promoter, a popular ribosome binding site, the reporter protein, and a double-stop terminator (see Figure 2). This created six separate constructs (three promoters, two fluorescent proteins), that were cloned into pSB1C3 in E. coli.

In order to test the efficacy of our fluorescence parts and the promoters, we performed a comparative fluorescence study. Cultures of bacteria containing each of the six constructs as well as one of competent cells were plated and grown overnight. Three colonies were picked from each plate, and grown overnight in 5 mL cultures of LB media. These were used to inoculate 25 mL LB media cultures at an OD600 of 0.1, which were grown to an OD600 of 0.5. At that point, 3 mL of each culture were spun down in a centrifuge. The supernatant was discarded and the cell pellets were washed with 3 mL of 0.15 M NaCl solution to reduce any fluorescence background caused by the LB Media. The cells were spun down a second time in a centrifuge and the supernatant was discarded. The cells were resuspended in 0.15 M NaCl and 200 µL of each sample were place in triplicate into a 96 well plate, which was read in a well plate reader with fluorescence filters appropriate to each fluorescent protein.

The results weren’t quite what we expected. As previously mentioned, in E. coli, the CP8 promoter was expected to be the weakest, then the CP11, with CP44 as the strongest promoter. The mCherry fluorescence indicated that the CP11 was the strongest promoter, then CP44, followed by CP8 (see Figure 3). The sfGFP(Bs), on the other hand, indicated that the CP8 was, by far, the strongest, then the CP44, then the CP11 (see Figure 4). These results were consistent across all three biological replicates. Differences from the Jensen and Hammer study may be due to different efficiencies in producing the products that were used as indicators of promoter strength. It is not entirely clear, however why the results were so different for our two proteins.

Due to time constraints, we have not characterized these constructs in L. lactis. This would be done by transforming the construct into the pTRKH2 shuttle vector, and then into both the L. lactis bacteria and E. coli bacteria. A similar fluorescence study would be performed for the full sets of constructs in both types of bacteria in the pTRKH2 vector for comparison of function in the different bacteria. Another important step would be to create constructs with well-characterized promoters in E. coli followed by our fluorescent proteins that could be used as positive controls for comparison with these constructs. Both of these steps would help us to get a feel for how both the promoters and fluorescent proteins work in different prokaryotic organisms.