An introduction to bTB

TB in cattle is caused by Mycobacterium bovis, which is one of several members within the Mycobacterium tuberculosis group. The disease affects a broad range of mammalian hosts, including humans and cattle, as well as natural reservoirs such as badgers, foxes, and deer1. In different areas, the major natural reservoir differs, for example in New Zealand the disease is carried predominantly by possums, in the USA white tailed deer are carriers, and in the UK the badger has a high rate of bTB1, 2. Depending on the species involved, spread of infection can occur via direct contact, contact with the excrement of an infected animal, or inhalation of even one aerosol droplet. Badgers in particular are a topic of controversy in the UK, causing discrepancy between farmers, vets, politicians and activist groups. This makes bTB a difficult subject to approach, due to strong opinions on the topic.

bTB in the southwest 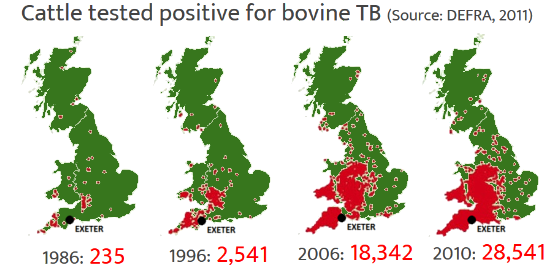 bTB is a problem devastating the global cattle industry, but the UK is particularly affected. In 2006, the UK and Irish Republic had an incidence of TB which exceeded that in any other European country by more than 5 times3. Within the UK, there are several areas which consistently produce high levels of bTB - the main area being the southwestern UK, which includes Devon, Cornwall, and Gloucestershire4. These areas contain a large proportion of the UK’s beef and dairy farms, which are placed under harsh restrictions if any bTB infected cattle are detected. These include trading restrictions which have crippled the beef and dairy industries in the UK.

Despite its destructive impact on local industries, bTB is on the rise in the UK. Since 1990, bTB levels in New Zealand have been significantly reduced, whereas in the UK levels have increased almost exponentially5. Figure 1 uses government data to illustrate the rapid spread of bTB in the UK from 1986 to 2010. It also shows that the disease has its highest incidence in the southwest UK, although other areas are beginning to be more severely affected as the disease advances.

The University of Exeter is based in Devon, a region with a strong farming community and a major bTB problem. The percentage of TB infected herds in Devon increased from 4% to 25% n ten years6. Investigating a local issue meant the team had access to nearby vets, farmers, and other parties affected by the disease.

The branch of the UK government that tackles bTB is Defra, the Department for Environment Food & Rural Affairs. Historically, Defra has used a simple strategy to control bTB: identify and remove infected cattle. However, with increasing herd sizes and higher incidence of bTB, this solution is no longer viable. In 2014 Defra released ‘A strategy for achieving Officially Bovine Tuberculosis Free status for England’7, which details a plan to invest £1 billion of taxpayer money over the next ten years in an effort to eradicate bTB.

New Zealand is a region which has managed to almost completely eradicate bTB from cattle over ten years. The New Zealand government spends 70% of its bTB budget on controlling the natural reservoir in the region - possums6. In comparison, badgers are a protected species in the UK and cannot legally be culled due to the Protection of Badgers Act 1992, as well as the Wildlife and Countryside Act 1981, and the Convention on the Conservation of European Wildlife and Natural Habitats. Defra has begun several pilot badger culls in the UK, although they have not provided data on their success or cost.

The current test used to detect bTB in cattle is the tuberculin skin test, in which cattle are injected with two strains of TB and then diagnosed 72 hours later by their reaction to the infection. However, the test has two major problems:

Firstly, the test has only 80% sensitivity8 This means 20% of infected animals may be left in a herd. As the size of the average UK dairy herd has increased in recent years, infected animals can easily spread the disease to other cattle in the herd.

In addition, the test is incompatible with the BCG vaccine. The BCG vaccine provides immunity to bTB, however it interferes with the tuberculin skin test - a vaccinated animal will give a false positive result. As a result, the BCG vaccine is banned for use in cattle in the European Union.

These clear issues highlight the need for a sensitive DIVA (Differentiate between Infected and Vaccinated Animals) test. An RNA-based toehold test would be compatible with the BCG vaccine, allowing for the vaccine to be reintroduced to control bTB in cattle.

As part of our human practices we, as a team, have made every effort to tailor our test to the people who will be using the final product. By looking at the TB debate from different perspectives, we were able to make sure that we developed a test that catered to the both the local farmers and the local veterinary community while taking into account the ethical implications that were brought to our attention by environmental activists.

[2] Clifton-Hadley, R.S. et al.1995. The occurrence of Mycobacterium bovis infection in cattle in and around an area subject to extensive badger (Meles meles) control. Epidemiology and Infection, 114(1), pp. 179-193.