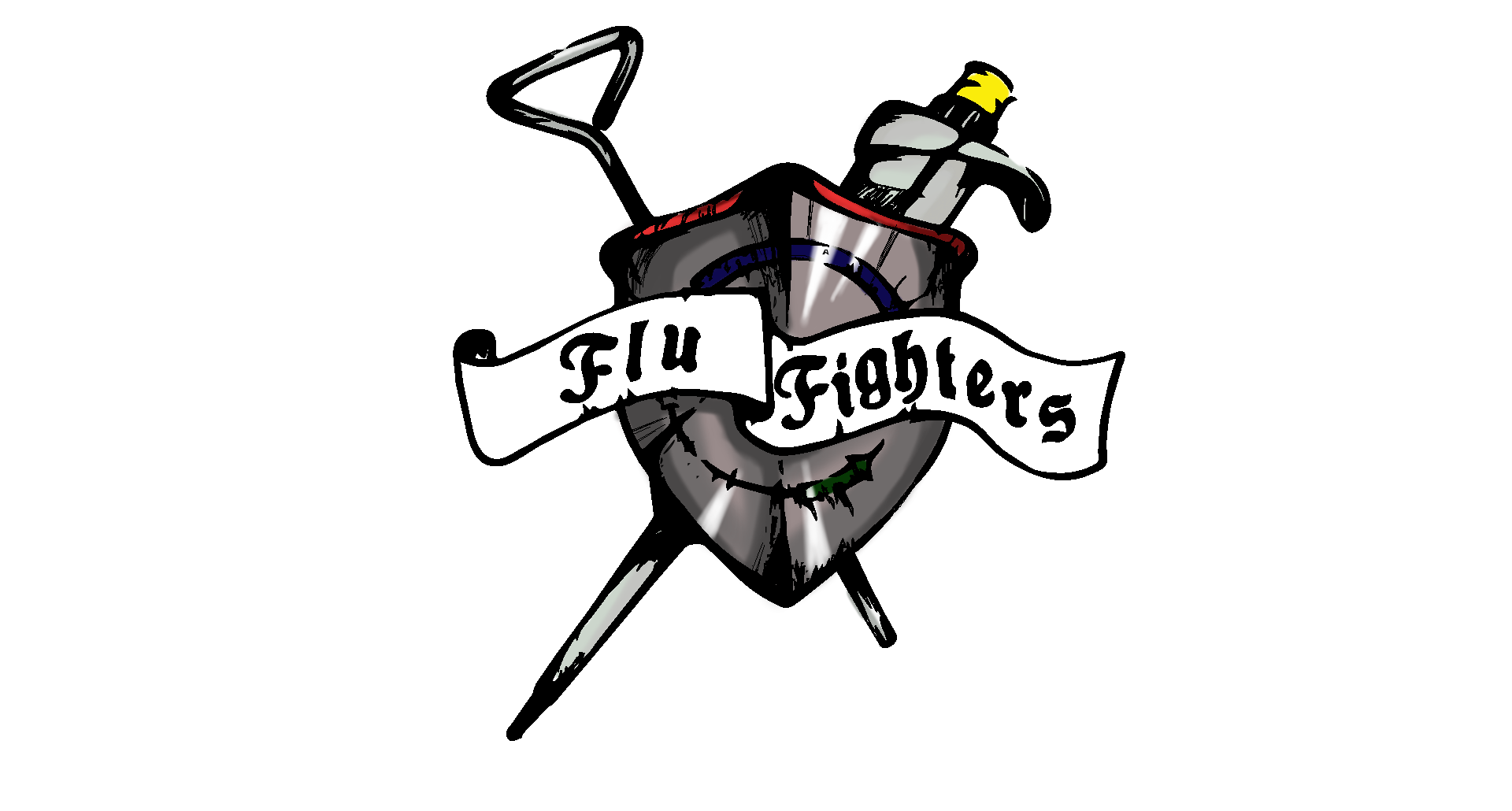 Our GroEL-PezT Biobrick shall enable heat-inducible cell lysis. Conducting heat induction would release our produced miRNA2911, which was triggered by light before. One major problem here is an activation of the GroEL promotor and thus PezT caused cell lysis at normal temperature (some kind of leakiness), therefore not reaching sufficient miRNA product. To stabilise our cell lysis event, we can employ a gene regulatory network called the genetic toggle switch [1]. It consists of a double negative feedback loop leading to a bistability network with memory function. This means the following:

The construction of the network can be seen in the figure below. The repressors lacI and clts conduct the double negative feedback, and can themselves be inactivated through IPTG and heat, respectively. The bistability arises from the fact that either lacI or clts, but never both at the same time, can have a high concentration, and each of them promotes its own production. The inducers (6h 2mM IPTG and 35min temperature increase from 32°C to 42°C) are only needed for setting the desired state once, then the state is maintained in a cell without external influence. 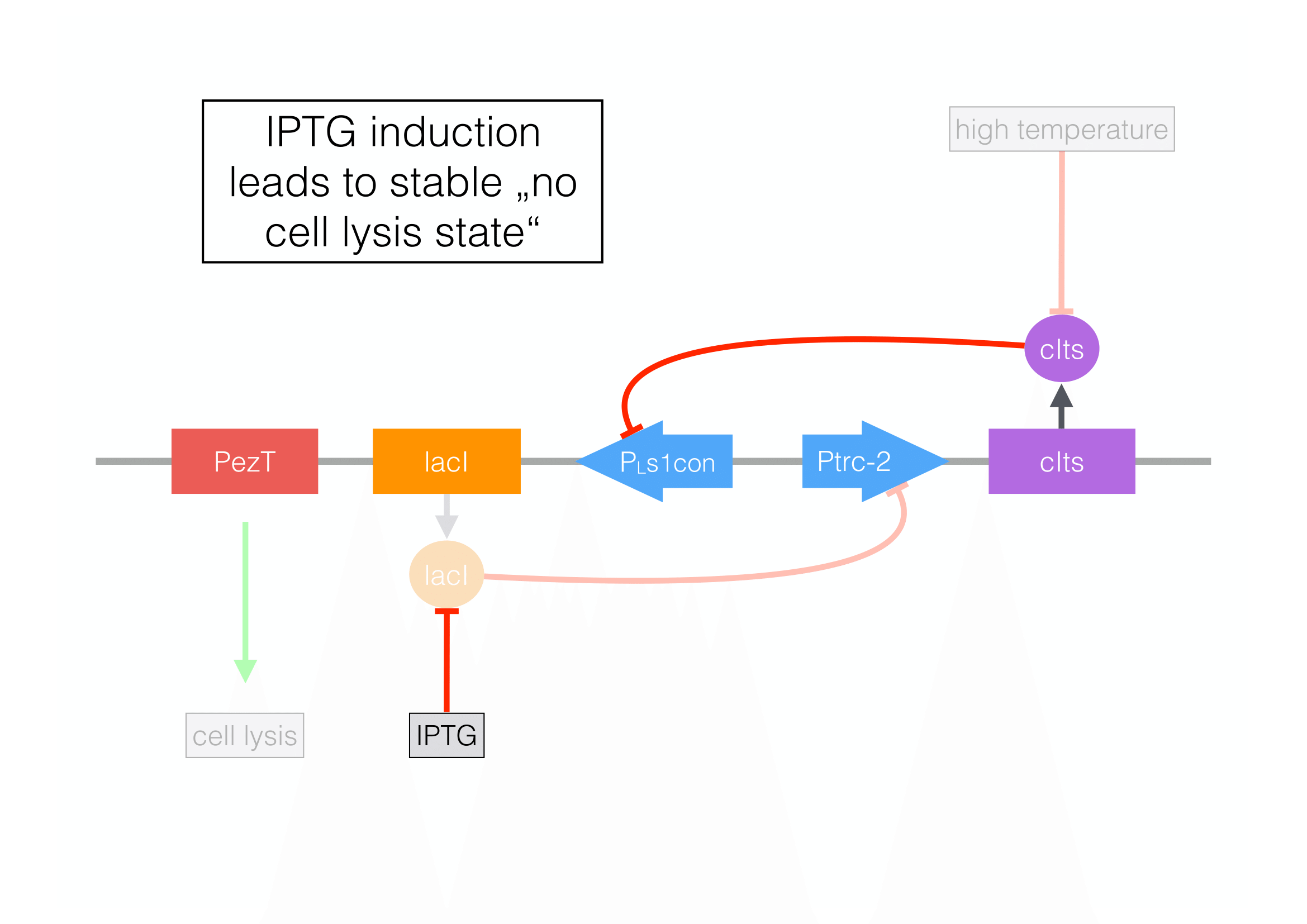 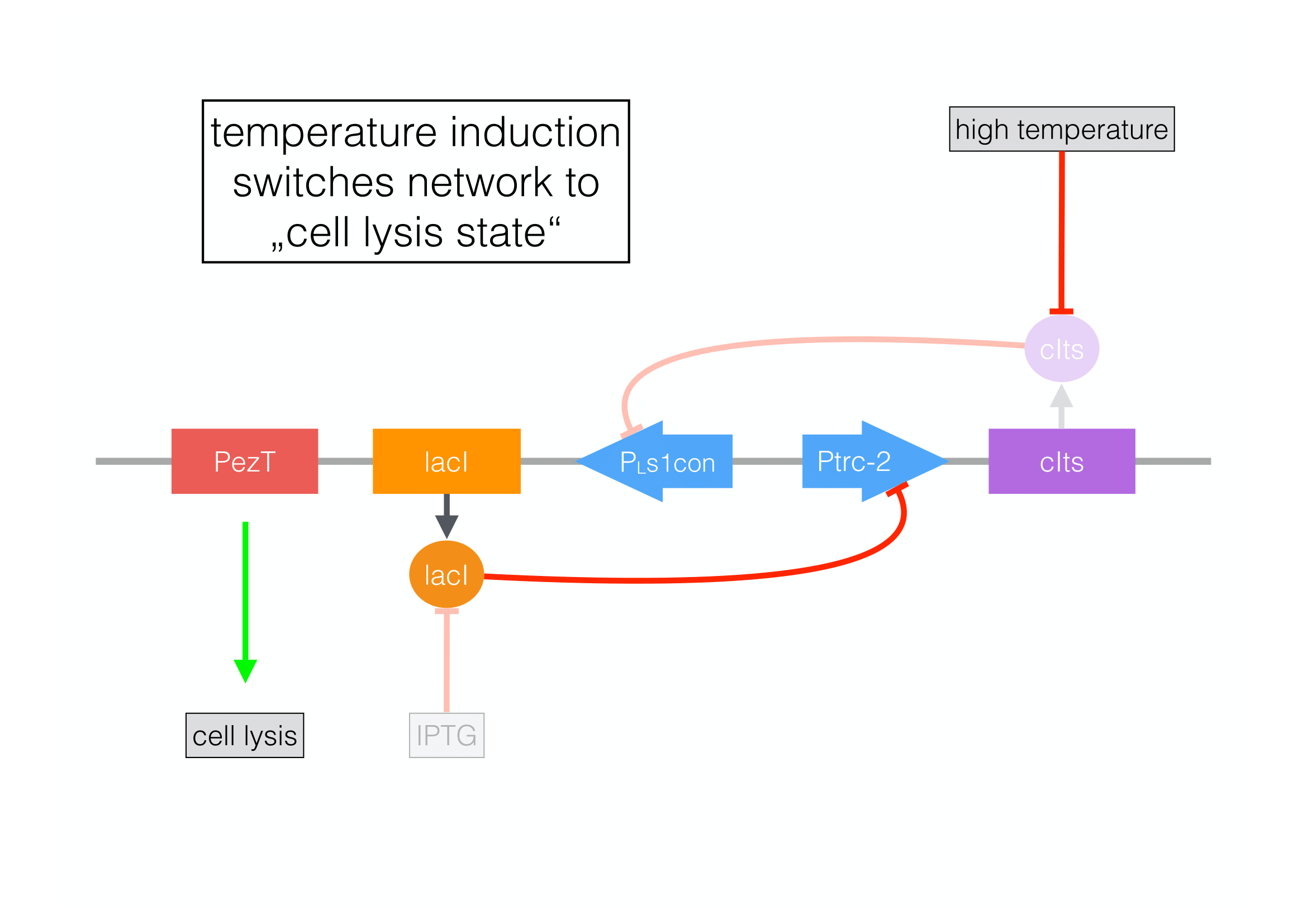 To analyse this network mathematically, a representation of it through ordinary differential equations (ODEs) can be obtained [1]. It models the repressor concentrations of lacI ($u$) and cIts ($v$). The kinetic parameters were measured in experiments.

representing the active fraction of lacI (IPTG unbound fraction) which can be deduced by a conservation law for lacI forms. Further, the parameters are 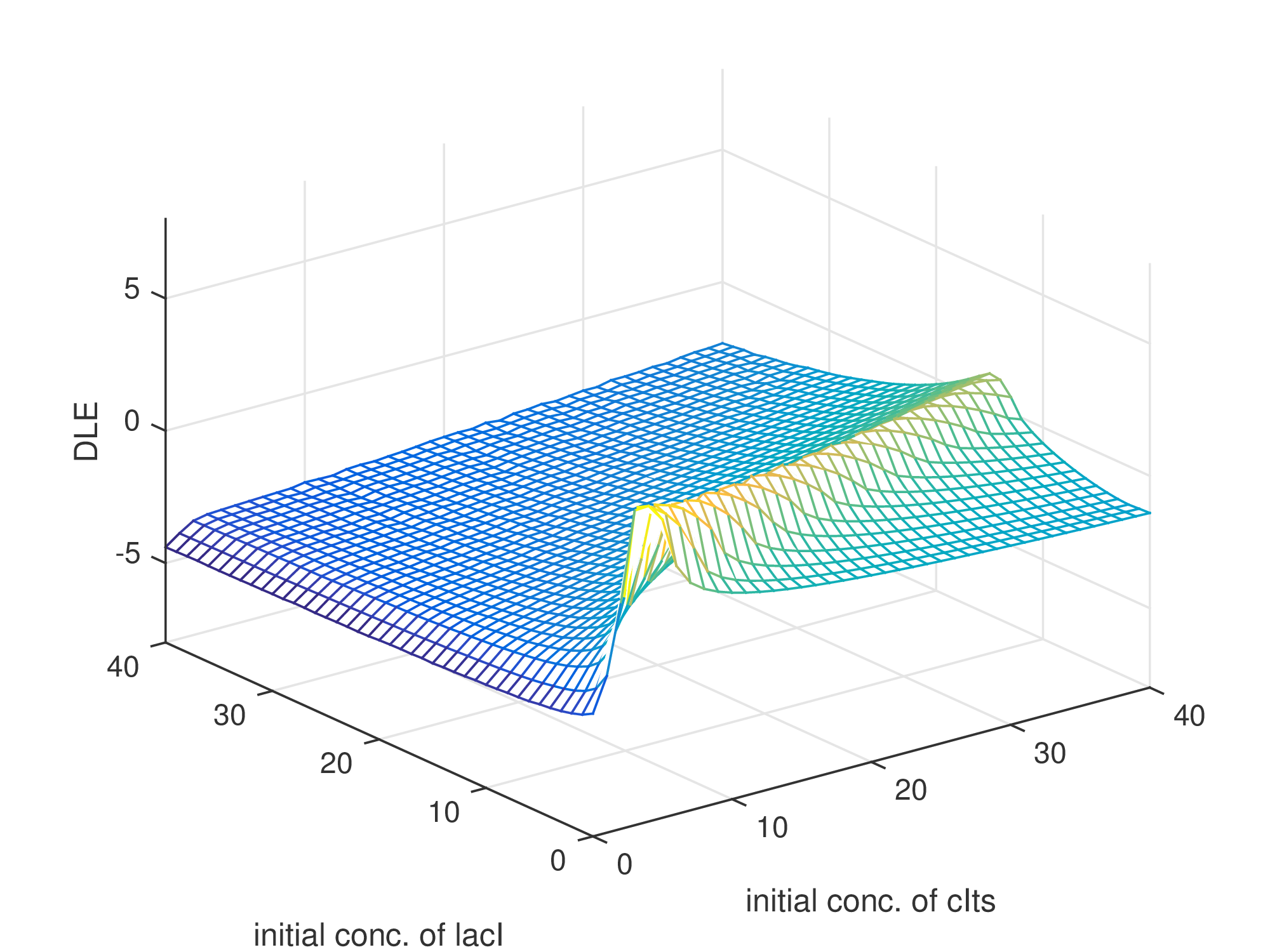 Following our practical workflow of the induction of the no-cell-lysis-state with IPTG to ensure sufficient miRNA production, we need to know an IPTG value where no initial conditions exist yielding a cell lysis state. In other words: Examining the IPTG value where the network gets monostable. Then a stable miRNA production is possible and the cell lysis can be triggered by heat induction, when we want it. The figure below for an IPTG value of 5e-5 M shows the required monostability, the threshold moved to the dimension axis for lacI. 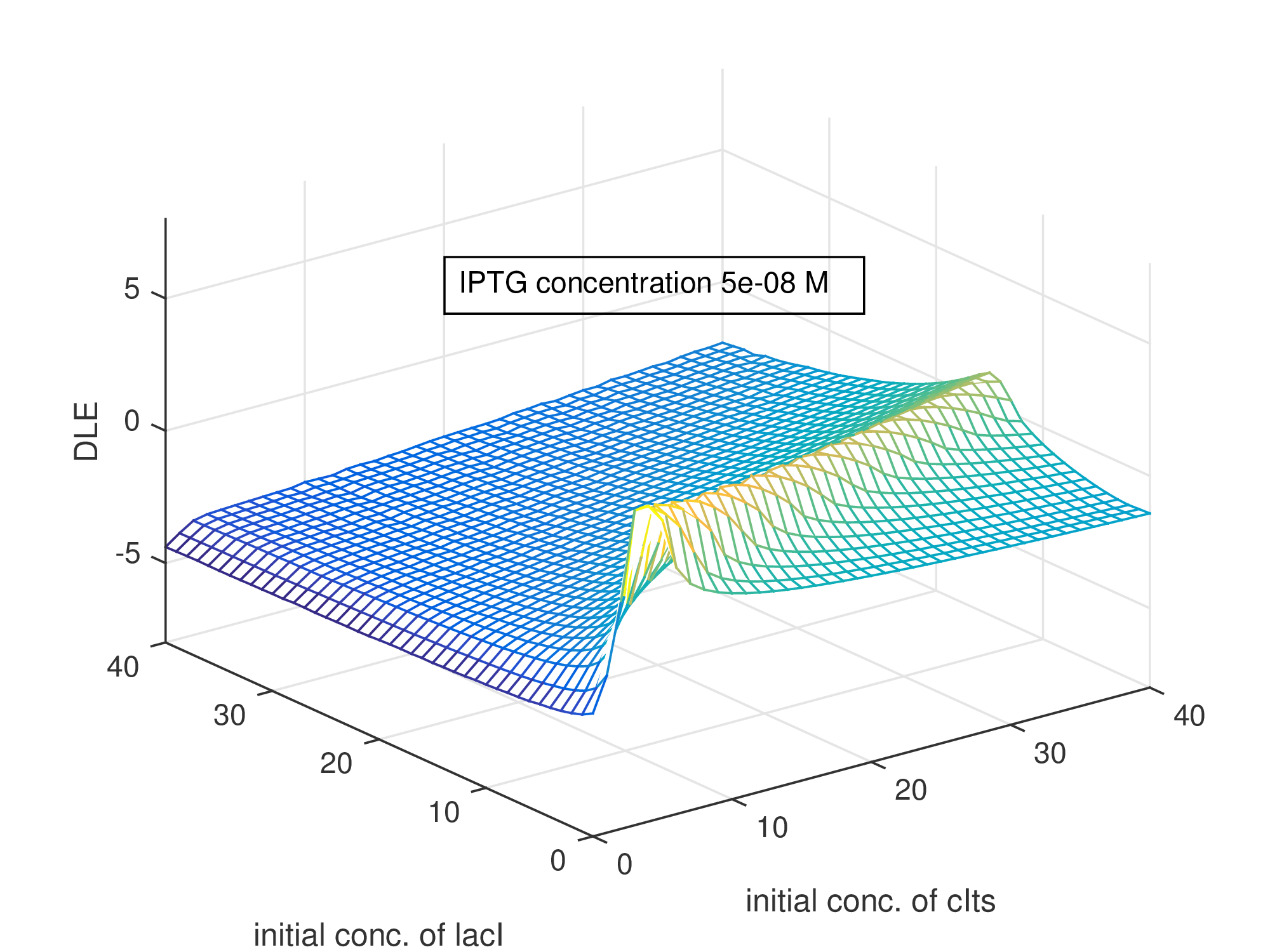 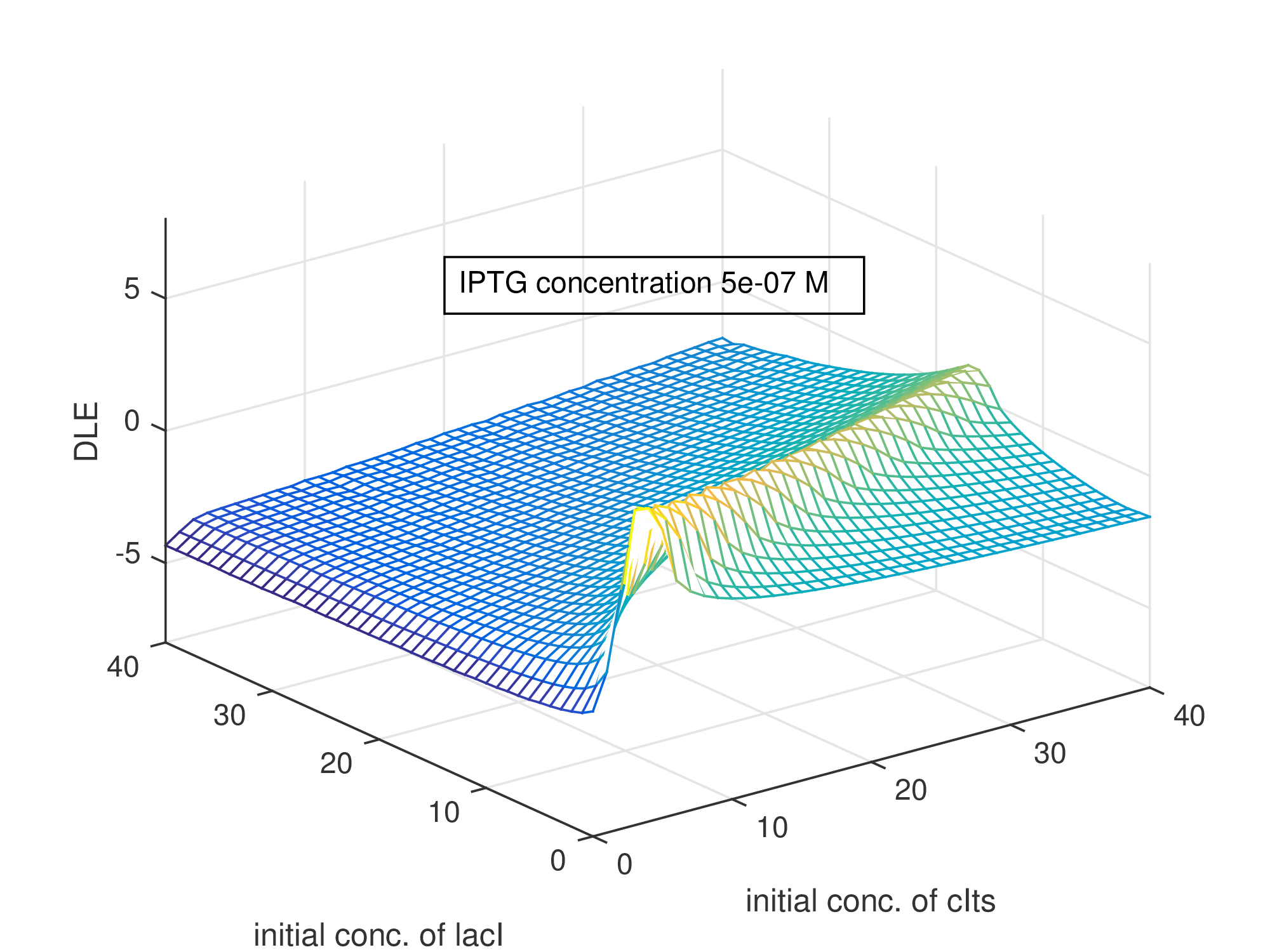 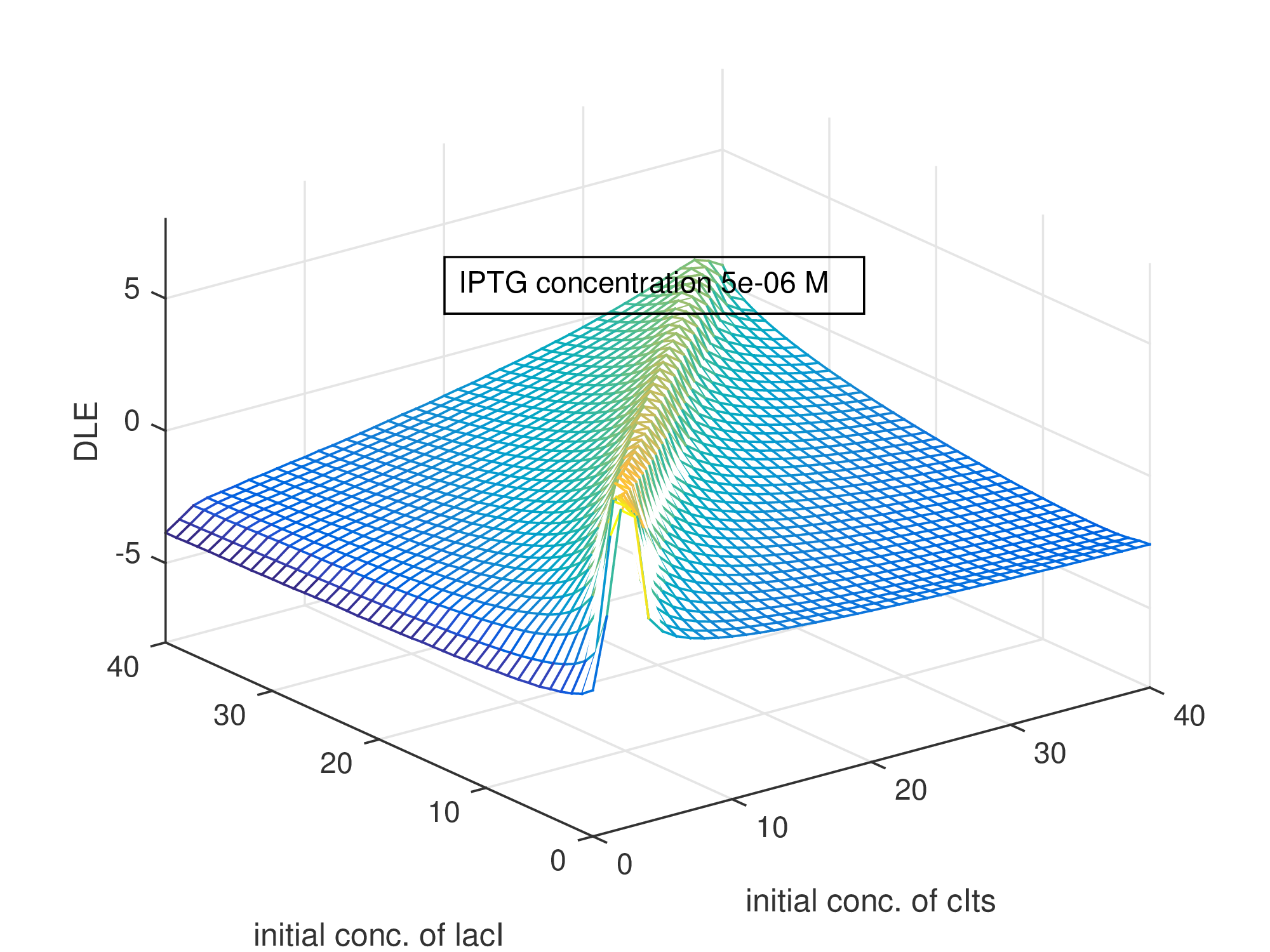 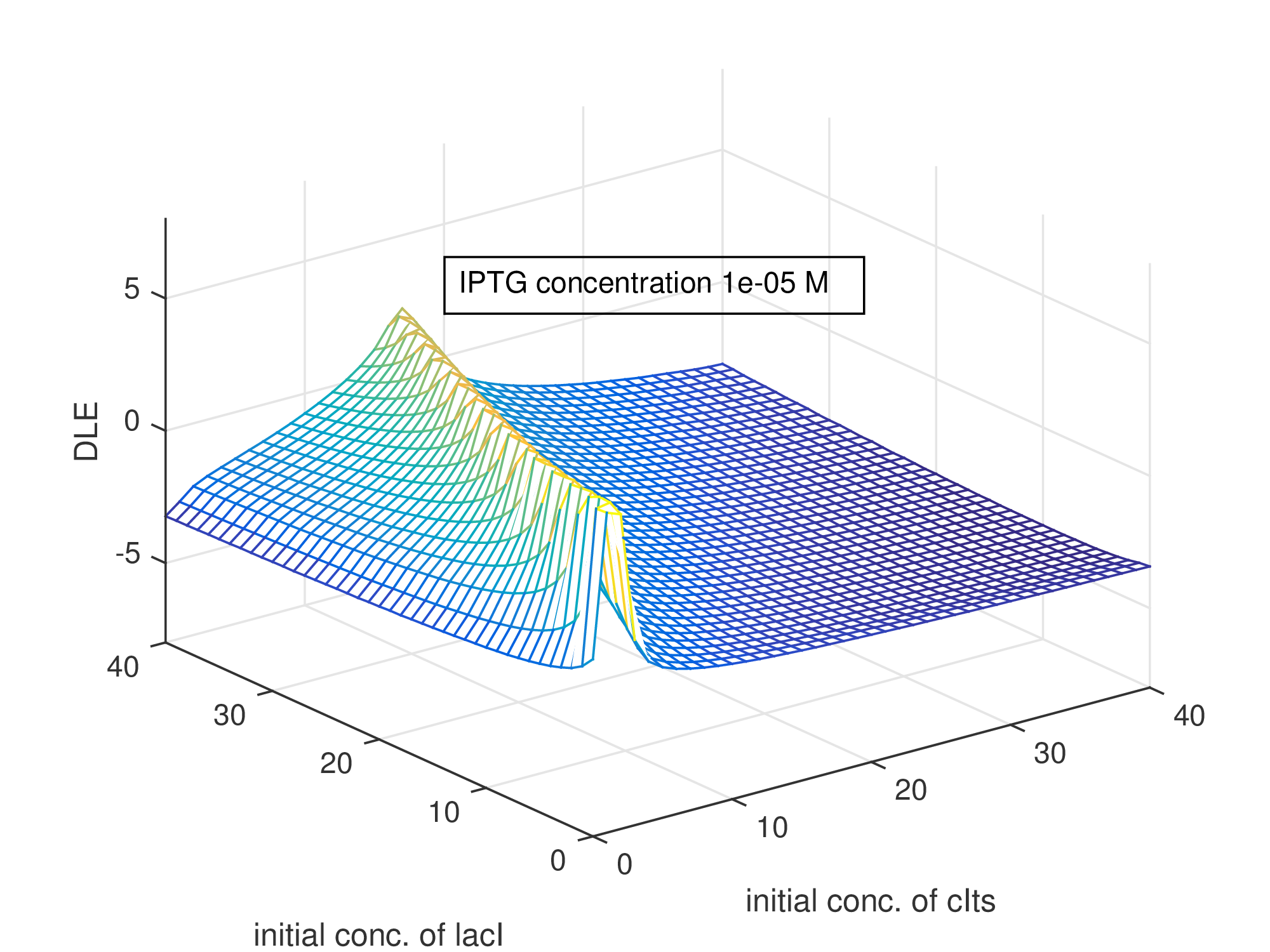 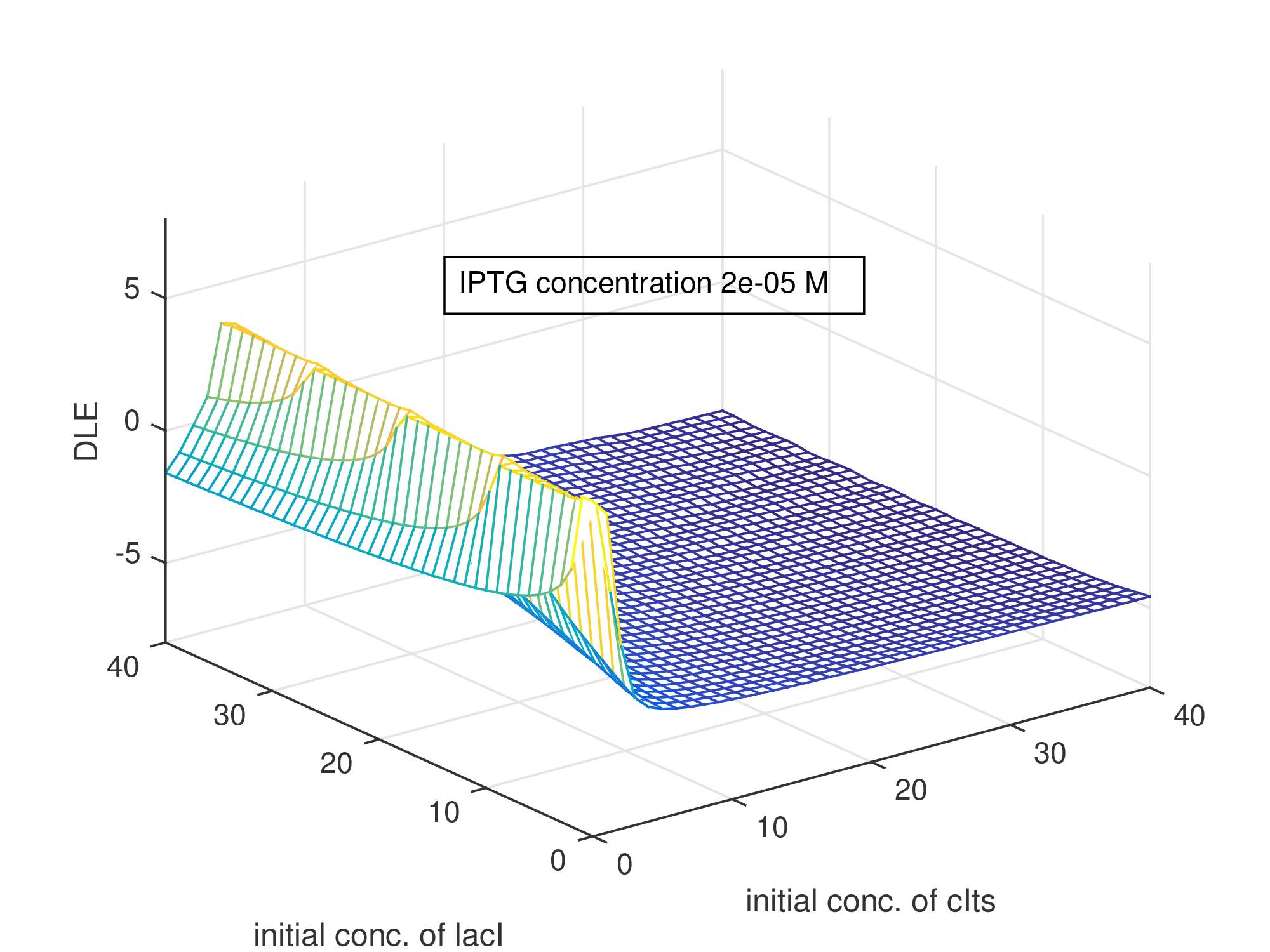 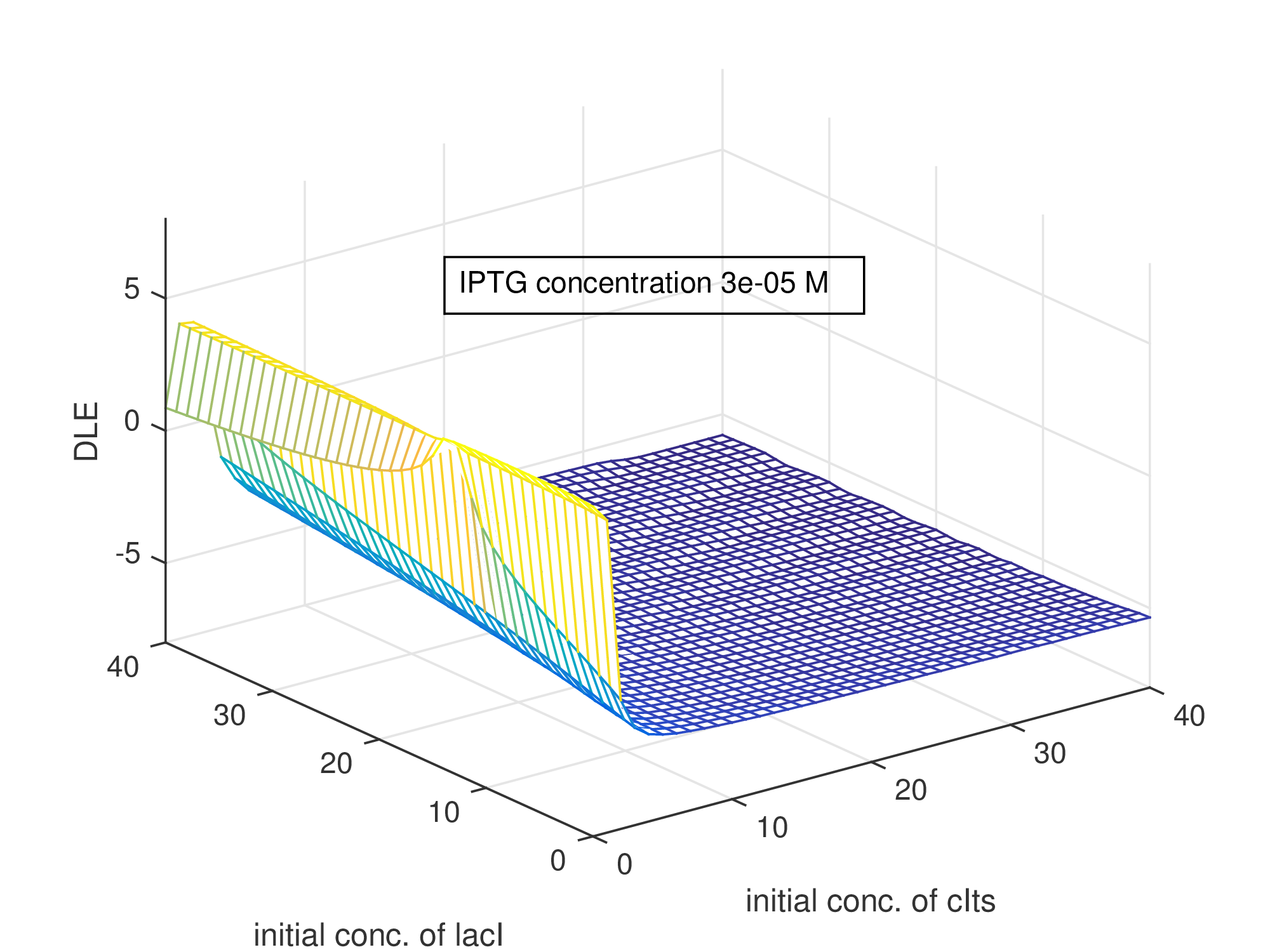 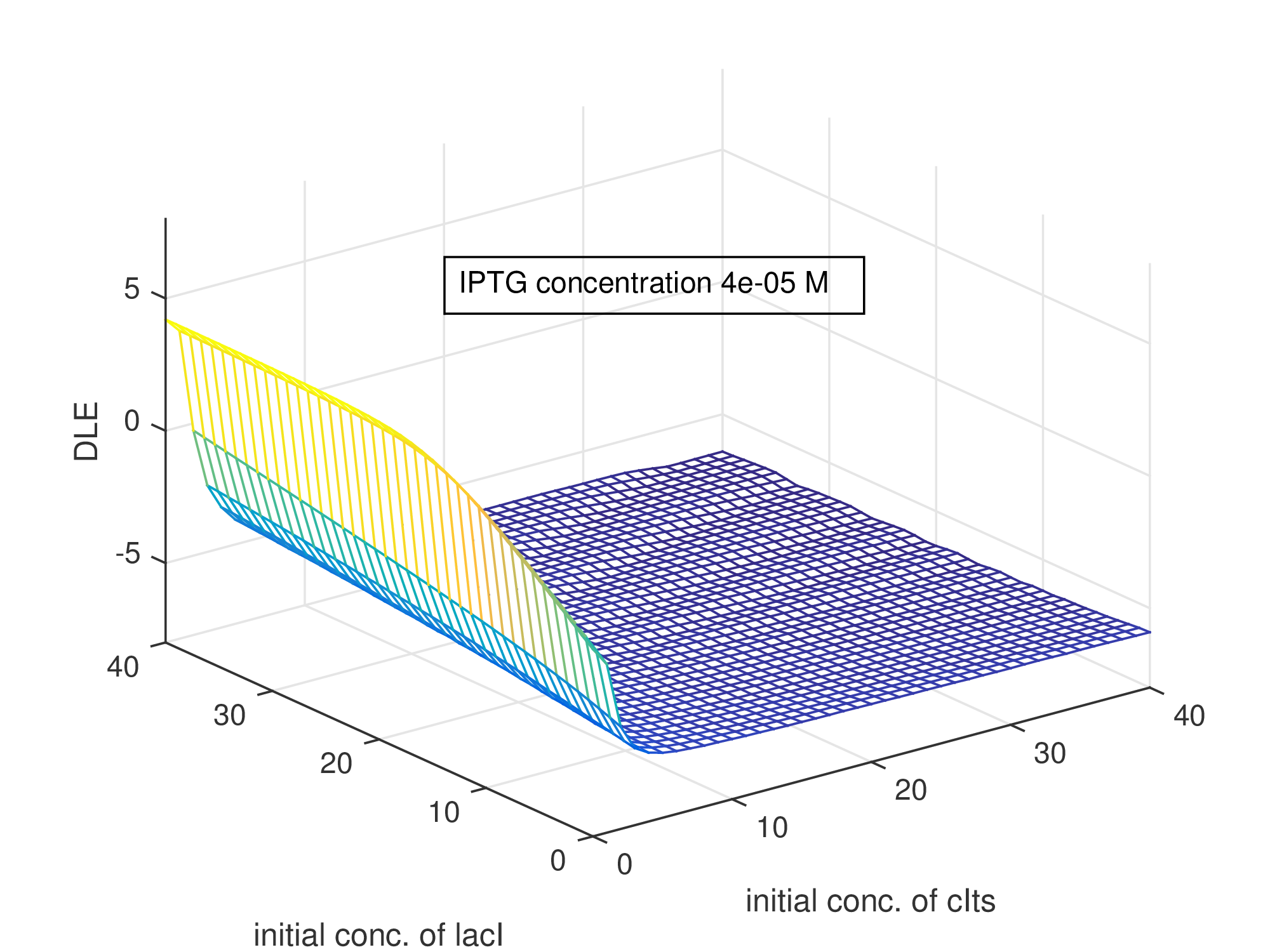 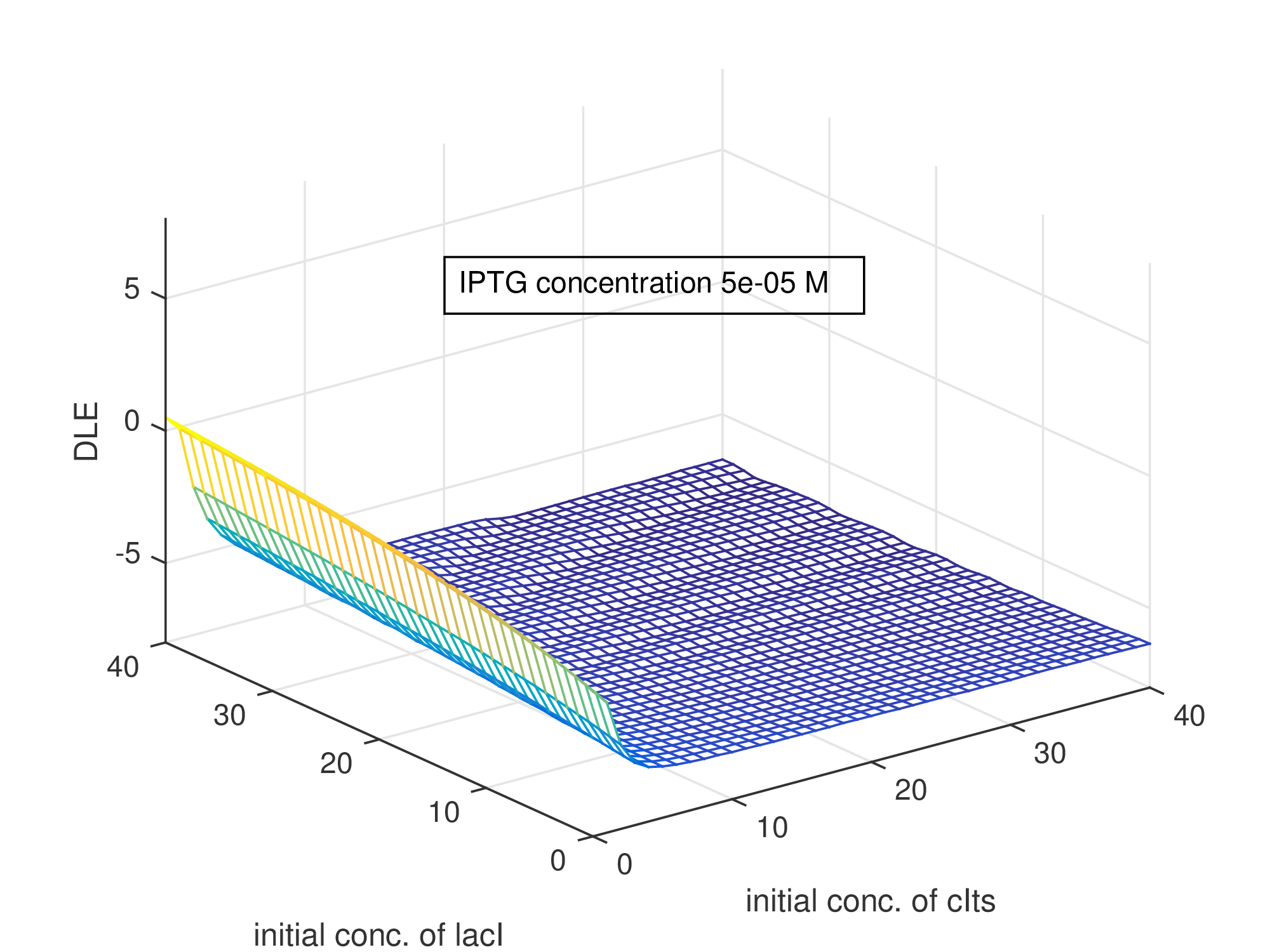