The Michigan iGEM Team shares the fascination for the use of aptamers in synthetic biology. Their aim is to develop an aptamer based detection system for pathogen related proteins. To create a robust test strip, they implemented their sensor in a cell free expression system using a different approach for riboswitch design. The actual aptamer sensing the substances is a small DNA oligonucleotide which is bound to a trigger DNA oligo. On binding of the aptamer, the trigger is released and turns on a RNA toehold switch leading to the reporter expression. To further extend their system, they asked us for the development of new aptamer sequences to be implemented in their sensor system. We therefore worked on the computational creation of aptamer candidates for proteins and small molecules with our software that might be implemented into their system. Furthermore we discussed ways to implement new aptamers in their existing system. In this process we assessed whether the use of our JAWS software may enable them to fuse a variety of aptamers to a single toehold switch construct. In this process we sketched a potential way for switching larger toeholds with very small aptamers.

To be more precise, we included several of the kanamycin aptamers which we validated in our project work into the toehold switch they intended to use. The figure shows the two states of the toehold switch for one candidate we designed. On the left-hand side, the state with no kanamycin bound is depicted. The toehold-switch is inactive as the Ribosome Binding Site (RBS) is hidden in a strong stem. Upon binding of kanamycin, the regulatory construct that is fused to the aptamer and that keeps the toehold-switch in its inactive conformation (by not allowing base pairing between the regulatory construct and the toehold-switch) changes secondary structure. Thereby a previously existing strong stem unfolds and reveals a sequence complementary to the toehold-switch. As soon as this happens, the conformation on the right-hand side is formed and the RBS can be accessed. 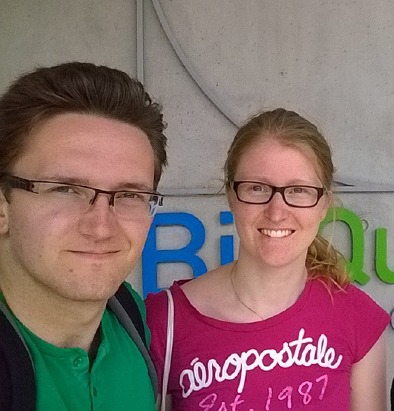 Back then when it was still summer, Michael Osthege from iGEM Team Aachen visited us. As a verteran of iGEM 2014, he already knew that one of the most important parts of every successfull project is sample management. Talking with him we got to know of other teams struggling to locate their samples. Their plan was, to get further information about the impact of this problem. Michael has had already prepared a draft for the survey which we then discussed. Of course in the following weeks we participated in the final version of the survery.

Not only did he bring a beta-survey, but also an already functional beta-version of a very promising software: tubefront. It's a mobile-optimized webservice which keeps track of all your samples, assigns IDs which can be written on the tubes and tells you where you can find them.
As of now the software is fully functional and availiable for free for other teams. They also developed a MediaWiki plugin which can be confortably implemented into any wiki.

Though we really loved tubefront with heavy heart we decided not to use tubefront ourselves, as we had already established a sample management system. We recommend any team to check it out though, as it has proven to work for various teams and future generations of teams could really benefit from it.

iGEM Paris Bettencourt has set up a visual databse that should help various iGEM teams collaborate and find common ground. In that database all teams can enter techniques, keywords, organism and many more thev are knowdledgeable in or have been working on. As common dots are connected automatically, it's easy so see, whom to ask for a collaboration.
Though we came a little late to the party, we really loved the idea and hoped, that the database has helped various teams!

"Rhizi is an open-sourced web of knowledge where nodes are sources of information (e.g. scientific articles, questions, blog posts) and edges are the links between them. The goal of Rhizi is to create information rich links between knowledge, open questions and ideas, through encouraging users to vote, comment, and create new relationships." 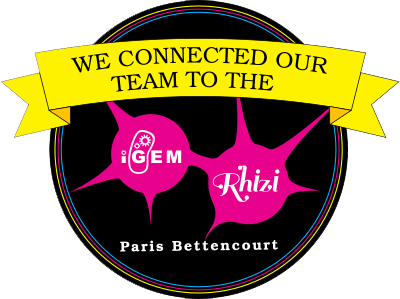 "Ionis iGEM project is dedicated to the popularization of biology and more especially of synthetic biology (watch our other videos). We decided to challenge other iGEM teams by asking them to popularize their project in one minute."

That's the slogan under which iGEM IONIS promoters their video project. And that's exactly what they did. Several other iGEM teams have successfully produced a short video clip in which they sum up their project in about one minute. Those videos are a great way of getting to know the basic information about other projects, so you can get to know more teams faster. Like various others we have also produced such a video. Watch it here, but don't forget to check out their other awesome videos!

"Nowadays, chewing gum is the second urban pollutant after cigarette butts. To clean chewing gum, specific engines are used but they are heavy and expensive. [...] Regarding these alarming facts, we have decided to create a new environmentally- responsible way to sanitize our streets."

In order to archieve this goal, iGEM Team Aix-Marseille designed an assay in which they combine three enzymes: a laccase, a lipoxygenase or latex clearing protein (LCP) and a cytochrome C. The purified product will then degrade synthetics polymers found in the chewing gum.
In order to evaluate the impat of their work, the team created a survey in which the participants were questioned about their knowledge about chewinggum, GMOs and many more. We took half a day off so we could support them with further data coming from the streets of Heidelberg. 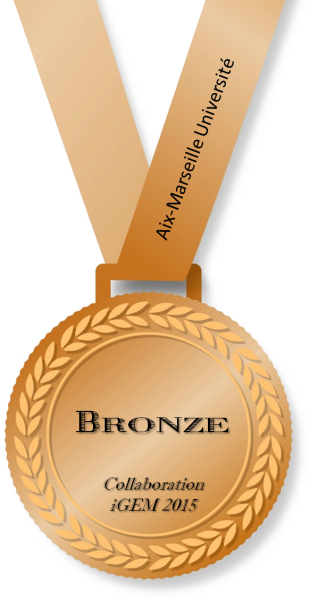