The determining factor for the performance of aptamers is its binding affinity described by the KD value. To identify this parameter for our software generated aptamers and have an easy and cheap system for aptamer verification available, we created a simple DNAzyme based approach and combined it with a mathematical modelling to estimate the values. Our system based on switchable HRP mimicking DNAzymes, can be easily read out by camera via a chemiluminescence reaction. This makes it very efficient and cheap to set up and enables us to implement it in a robot-automated screening. Despite being very efficient in lab setups, this system has its drawbacks in end user applications, where the simple, background free detection of certain substances is the main goal. Therefore we created a system in which the background of the HRP-mimicking DNAzyme is effectively suppressed by a rigid stem, which has to be cleaved by an integrated F8 DNAzyme. With this system we created a practical readout able to detect narcotics and other substances even under beverage conditions.

With our software we aimed to give scientists the capability to create aptamers that are specific for ligands and show the highest possible affinity. If these requirements can be fulfilled, our software generated aptamers are highly suitable for challenging applications like trace detection of small molecule substances or proteins, as shown in our AptaBody project. To obtain the KD values for aptamer binding the state-of-the-art methods include Microscale Thermophoresis and surface plasmon resonance. Yet those techniques require special preparation of the aptamer to measure it and depending on the application, new protocols have to be established. So these techniques are excellent in providing high quality data in the lab, but are hard to convert into a cheap and portable system for ligand detection and measurement. As we wanted to screen a multitude of candidates with a limited budget, we had to develop a new, easy, yet robust system for aptamer characterization.

The HRP-mimicking DNAzyme is a powerful tool to generate readouts in vitro. It reduces hydrogen peroxide and thereby releases reactive oxygen species, which can either trigger chemiluminescence or convert substrate dyes. Necessary for its function is the incorporation of hemin into a G-quadruplex structure. This complex is catalytically active but can be inhibited by the obstruction of the G-quadruplex formation. This can easily be done by contracting nucleotides of the G-quadruplex domain into a stem. If part of the stem is stabilized by nucleotides of an aptamer, the binding of the aptamer destabilizes the inhibiting stem and can activate the DNAzyme.

A strong stem encaging nucleotides of the actual DNAzyme sequence which forms the G-quadruplex, inactivates the hemin binding and therefore the catalysis.

To create these constructs, we relied on the capabilities of our JAWS software. This enables us to select a small pool of possible stem candidates that might show the required switching behavior. Yet to really prove the performance the generated stems has to be analyzed.

For switching, stem has to be in similar range of formation energy to the strong hemin-G-quadruplex-complex to enable an equilibrium state. This equilibrium is creating a bistable system so it can be shifted by the binding of the ligand to the aptamer. Yet if the stem is rather weak the amount of active G-quadruplexes, which have been formed without the binding of any ligand molecules, increases. Yet if the stem is getting stronger than the energy gained from ligand binding, the amount of switching DNAzymes decreases. The other important variable contributing to the behavior of the switching DNAzyme is the affinity of the aptamer. This is described by the KD value. As we want to characterize the aptamers generated by the MAWS software the best way possible, we want to guess this parameter from the data we record during this screening effort with our modelling approach.

To obtain this necessary data we had to record the enzyme activity of a DNAzyme candidate at multiple ligand concentration levels. To do so we chose to record the halflives of the chemiluminescent substrate luminol. With the assumption of first order kinetics the half-life of the luminol signal $t_{1/2}=\frac{ln2}{ k_{act}*c_{active DNAzyme}}$ is inversely proportional to the enzyme activity $k_{act}*c_{active DNAzyme}$.
Thereby we can perform the necessary modelling to obtain the KD. 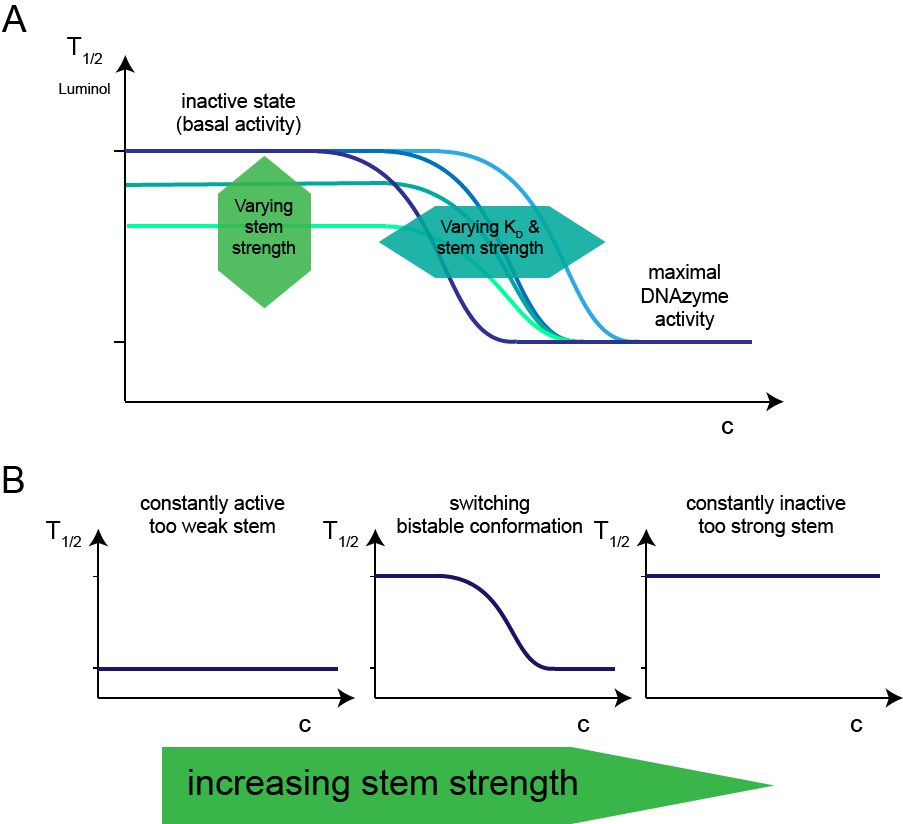 (A) Both the aptamer affinity and the strength of the communicating stem influence the switching behavior. A formed stem fixes the DNAzyme in an inactive state. The stronger the stem the fewer DNAzymes are active, if there is no ligand present. Binding of the ligand naturally decreases the stem stability. The point at which a sufficient amount of ligand binds the DNAzymes to show activity is therefore determined by the affinity of the aptamer, described by its KD (B) For a very weak stem full activity independent from ligand concentration can be expected. In turn an overly strong stem should lead to no significant increase in activity with rising concentrations. Therefore the best switching behavior should be observed with stems of medium strength.

To perform this screening with the necessary throughput to validate numerous aptamer and DNAzyme candidates generated by the software with the necessary precision, we resorted to a robot aided screening in 96well plates. The Hamilton Microlab Star Liquid Handling robot provided us with the necessary dilution series of the target ligand in 96well plates. After addition of the 1µM DNAzyme/hemin mix a western blotting luminol substrate was dispensed to all wells at a specified time point. To record a time series on luminol luminescence for every well without a timing bias of sequential scanning, we chose to scan all wells of the plates simultaneously with a western blot documentation camera in repetitive capture mode.

The recorded sequences were segmented by automated ImageJ masks to obtain the mean intensity for each well at all time points. The data was loaded into MATLAB for further processing. By exponential fitting of the datapoints the halflives were obtained. Plotting those against the concentration gives good indication on the switching behavior of a certain candidate.

First we can confirm the capability of our system to provide reasonable data and for example show that the activity of the HRP-mimicking DNAzyme is independent from the concentration of the screened Kanamycin ligand. Secondly we can show that some candidates show the expected switching behavior while others suggest with their plateau trajectory, that the screened stem candidate does not seem to stabilize a bistable conformation. 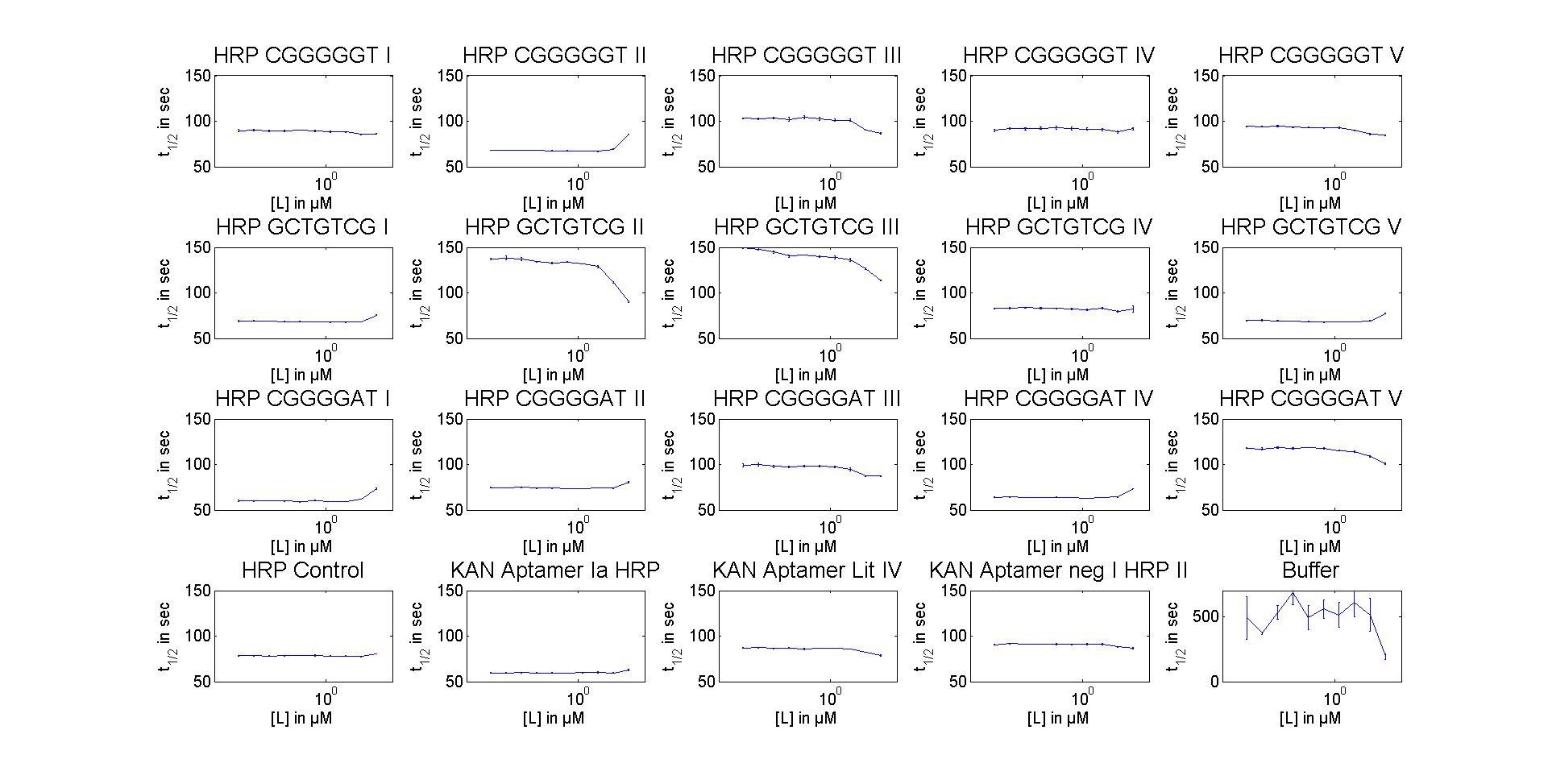 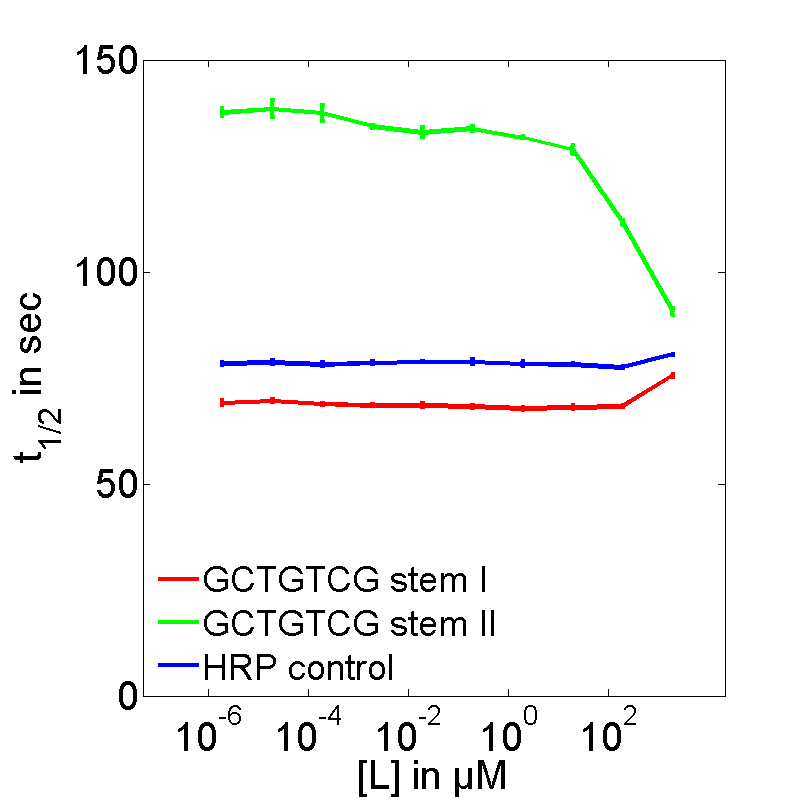 All recorded halfvalues for Kanamycin aptamer candidates with different stem variants plotted against kanamycin ligand concentrations ranging from 0µM to 1920µM. Buffer shows no clear half values but camera noise.

We computationally designed a communication module for an HRP-F8 fusion DNAzyme using our software JAWS. Aptamers for ampicillin and ketamine were joined to the stem of the fused F8 DNAzyme to regulate its cleavage activity. The ketamine-binding aptamer was previously designed by our software MAWS to specifically target the anesthetic, while the ampicillin-specific aptamer was previously published . The fusion DNAzymes were tested against their respective ligand in solution, where 1 µM DNAzyme hemine solution was incubated together with the ligand, hydrogen peroxide, and TMB. Reactions were stopped using 1 mM hydrochloric acid.

A fusion of an ampicillin-binding aptamer and the HRP-F8 DNAzyme was incubated with hydrogen peroxide and TMP in either the presence or absence of ampicillin in A) reaction buffer or B) ampicillin-spiked energy drink. 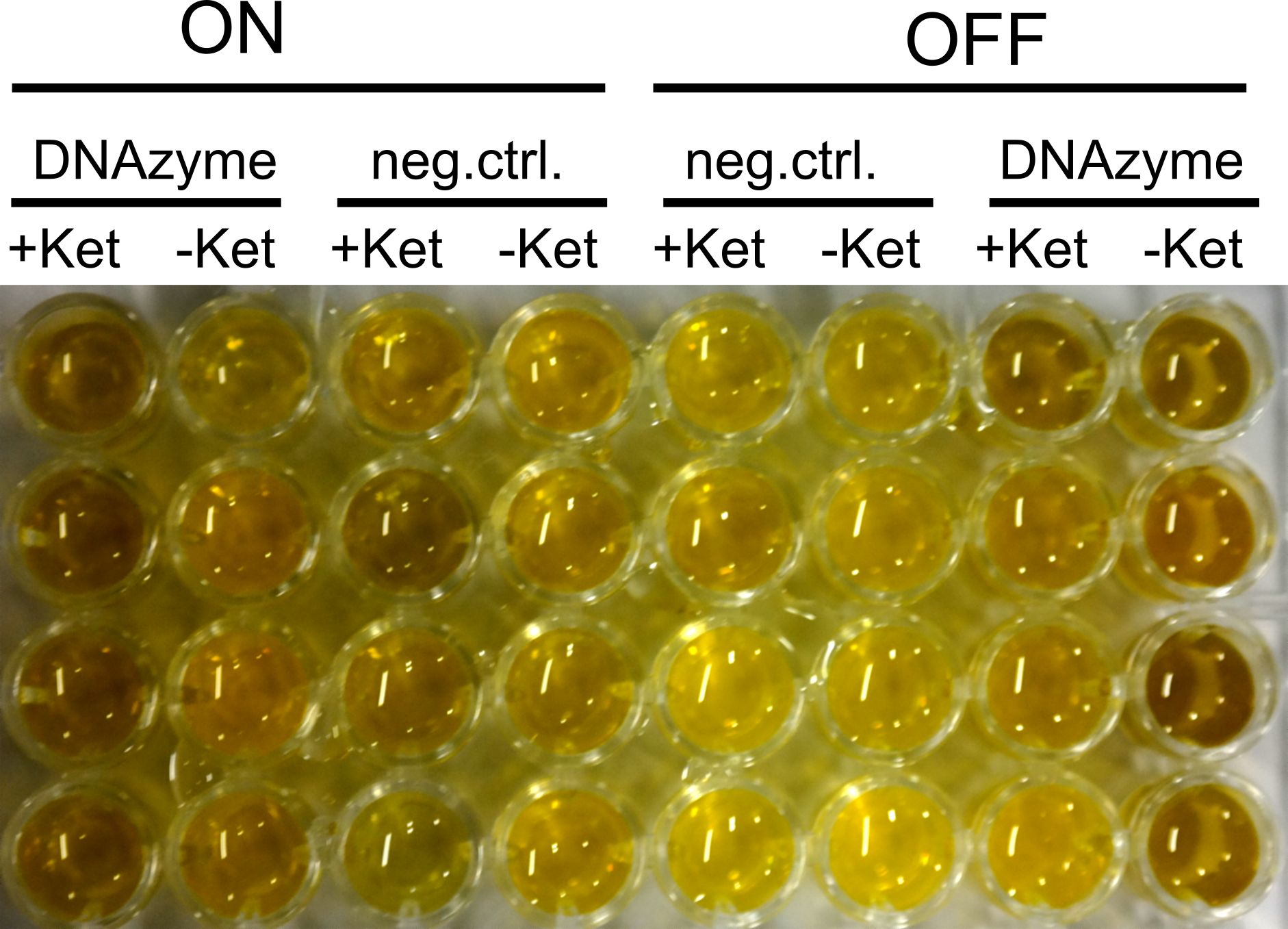 Fusions of a ketamine-binding aptamer and the HRP-F8 fusion DNAzyme designed to switch either on or off in the presence of ketamine as well as negative controls (DNAzymes predicted by our software to not possess an efficient switching behavior) were incubated with hydrogen peroxide and TMP in either the presence or absence of ketamine.

Catalytic activity of the ampicillin-responsive DNAzyme drastically increased upon exposure to its ligand (Fig. 1A), indicated by the solution turning deep blue, while the negative control lacking ampicillin was only faintly coloured. To test this detection system in a more realistic setting, the DNAzyme was incubated in energy drink spiked with ampicillin. Here, a fainter change in color, presumably due to suboptimal buffer conditions was observed, with the ampicillin-spiked beverage still showing significant discoloration compared to the pure drink (Fig. 1B). From the two DNAzymes designed for ketamine one switched on in the presence of ketamine, while the other switched off. Both produced similar colors after the reaction was stopped (Fig 1 A+B). Thus, our software suite proved successfull in designing a detection system for a drug within less than a day of computation!