Synthetic biology and biological research in general can provide vastly usable new techniques to improve our quality of living. Nonetheless, one should not forget that biological engineering requires precautionary safety measures. In this context, safety has to be understood on multiple levels.

Firstly, the researcher needs to secure himself from any danger conveyed by what he is working with. Secondly, on a larger scale, society needs to be kept safe from anything that could escape the lab or be released and thereby impose a threat - that is the immanent responsibility of the scientist. Finally, the samples one works with can be sensitive and easily degraded, hence by safety measures, researchers also secure their projects.

Concerning software, the same levels of safety exist: The data entered by researchers need to be protected, misuse of the software of any kind should be prevented and the software itself needs to be secured.

As were both, working with genetically modified organisms and designing a software, all of the above measures need to be thoroughly considered. We therefore here describe the different approaches we took to guarantee safety and thereby laying the basis for having a great summer. Also, we read about the official safety guidelines proposed by the iGEM HQ online. Watch the two videos below for further good instructions on lab safety!

Before starting with the wetlab work, Dr. Barbara DiVentura gave us a safety instruction in which she informed us about how to work in the lab and what was considered as good practice. 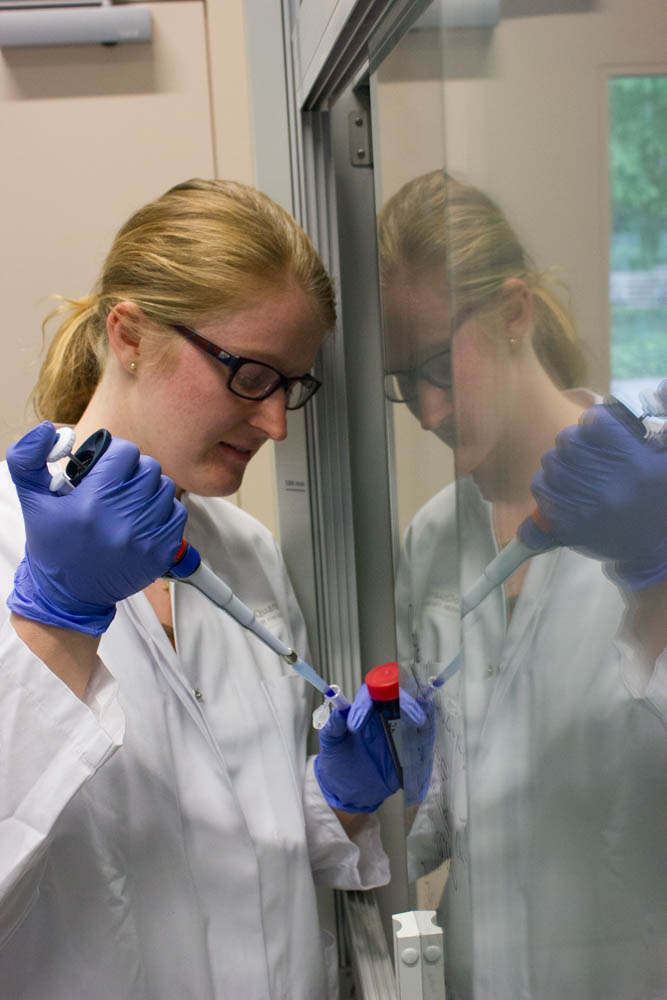 The first step towards good lab safety are personal precautions such as wearing lab coast, gloves in regards to the handled matter and safety goggles. As we have been working RNA which is highly sensible to contaminations, we cleaned a part of our lab using hydrogenperoxide. During this act of cleaning we wore special mouthgards so that we would not breathe in any of the potentially harmful chemicals.

We not only separated a RNAse free part of the lab, but also designated a special area for running gels, as we would be handling chemicals like EtBr and SYBR Safe for staining. We tended to use SYBR Safe, as it is proposed to be less toxic and as we wanted to keep the use of dangerous substances as low as possible. Other dangerous chemicals, such as beta-mercaptoethanol, TEMED, organic solvents and acrylamide were of course handled under the fume hood.

Besides the different working sections, we also separated programming and documentation from bench work, as we decided never to handle any electronics wearing gloves. With regard to that, we were very lucky to have access to our own office two floors upstairs from our lab. There we had enough space for several computers and laptops, so that the programming could be safely separated from the lab work.

As a precaution against spread of modified organisms, equipment and benches were regularly cleaned using EtOH. Also, we used designated trashcans for any living matter that were then autoclaved afterwards. We were highly sensible regarding possible spillages of E. coli as that might ruin our RNA based experiments, because of which we chose not to use certain parts of equipment for cells in order to keep them clean and our samples safe.

As we worked with genetically modified organisms, a special focus should be set on wetlab safety.

The organisms we were using, i.e. S. cerevisiae, E. coli strain DH5α, E. coli Top 10, as well as all cell lines, namely HEK 293T and HeLa cells are suitable for the S1-safety laboratory we are working in. Besides, the plasmids we are using for transformation (p413, p415 for S. cerevisiae, pSB1C3 for E. coli) are not harmful for humans.

As besides working with genetically modified organisms, we were focussing on functional RNA and DNA, we made sure that no harm can arise from them. Even though we are using the self-cleaving ribozyme vom Hepatitis Delta Virus, we do neither use the virus itself, nor is the ribozyme in any way able to integrate in other genomes or convey virulence. Another issue is the work with specific, potentially harmful substances within our project work, e.g. ketamine. In order to responsibly work with these substances we chose multiple precautions to not endanger anyone in our team. Firstly, we never used concentrations or volumes that could be harmful when accidently ingested. Secondly and even more importantly, all experiments involving those substances were only conducted under the supervision of a physician.

Apart from the mere use and proof of concept, our most fundamental goal is to provide the community of synthetic biology with standardized, yet versatile tools to design, create, express and ultimately validate novel functional RNA and DNA. We are well aware that we cannot control against which ligands the users of our software will create aptamers or aptamer-regulated functional RNA or DNA (also see software safety). For the wetlab validation of functional nucleic acids developed by users of our software, we recommend similar safety precautions as we described earlier.

As we envision the use of our Twin-Ribozymes in the role of mRNA editing in the treatment of Cystic Fibrosis, we know that further safety testing is required in order to exclude adverse effects and longterm damage to the cells. In our project, we nonetheless only give a proof of principle and did not perform any test in a living animal or even a human. In case this was to be conducted in order to follow up the ideas presented in this project, very thorough safety tests need to be performed. <\p>

Besides working in the wetlab, we are proud to have worked on two pieces of software that we want to make accessible to the iGEM-community and scientists in general: MAWS and JAWS.

Both softwares generate nucleic acid sequences as output, which do not impose any biological hazard. As the designer of the constructs will not need to work with the organisms that produce the particular aptamers, biosafety concerns are very low. Naturally, we cannot control the proper use of the designed constructs, but as they cannot replicate nor be in any form infective, biohazard is minimal. Chemical hazard on the other hand is also not very high as there are no known pathogenic functions of the small nucleic acids that can be generated with our software.

MAWS and JAWS are both not relying on a web-interface. Consequently, they are less prone to attacks and no data (except for the ligand to which an aptamer should be designed) of the user is acquired. Therefore, problems in storage of data are circumvented.

Finally, our documentation enables readers to better understand our software and to use it properly. Besides, we offer the possibility to contact us personally, so that we try to reduce any form of improper use of MAWS or JAWS.