Detection of short nucleic acids is mainly done using a radioactive labeling strategy because of the high sensitivity it offers. We wished to bypass the risks that are connected to working with radioactivity, therefore we aimed to establish two alternative readouts with suitable sensitivity. The first method we worked on is based on click chemistry and has been previously proposed. The second method, based on the HRP-mimicking DNAzyme, is novel and was established by us. Both methods bear the potential of sensitive and specific readout and could be used in many applications.

As our project revolved around functional nucleic acids we had to face the challenge of visualizing short ssRNAs and ssDNAs. When testing the activity of our designed ribozymes or DNAzymes it was especially important for us to distinguish between reacted and unreacted equivalents even if their sizes were very similar. Most scientists choose a radioactive labeling technique to visualize little amounts of RNA or DNA. We wanted to develop new approaches to give scientists the possibility to detect little amounts of nucleic acids without the necessity to employ radioactive isotopes. On the one hand we decided to use copper-catalyzed azide-alkyne cycloaddition to specifically label RNA or DNA with fluorophores as described in . On the other hand we came up with the idea of using the HRP-mimicking DNAzyme connecting it to our DNA or RNA of interest to make it visible on a Southern/Northern blot.

Sharpless described the copper-catalyzed azide-alkyne cycloaddition (CuAAC) also called click chemistry. This is due to the simple concept. It works under many different conditions with high yields and no byproducts. A highly energetic azide reacts with an alkyne enabling a selective reaction that links these reactive groups to one another via a dipolar cycloaddition (Fig. 1). However this reaction requires a lot of activation energy. Without catalyst the reaction is slow and results in a 1,4, 1,5 triazole regioisomer. To increase the reaction rate and to avoid this byproduct it is necessary to add copper as a catalyst. Copper (Cu(I)) proofed to be a suitable catalyst that rapidly yields a 1,2,3 triazole heterocycle.

Reaction scheme of the CuAAC. Adapted from: Source 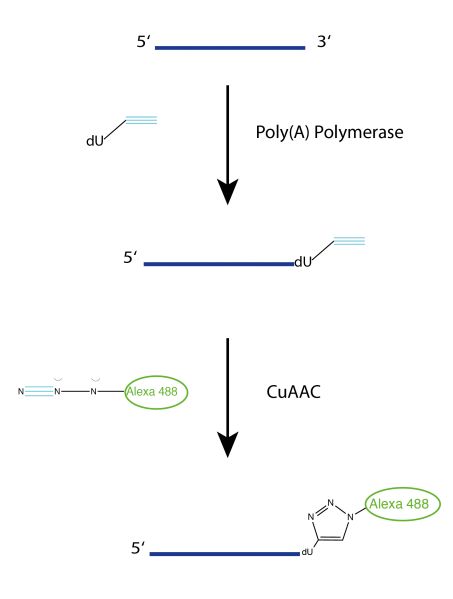 The advantages of a click reaction are that it is very simple and works under many different conditions, as well as that the reaction results in high yields with no byproducts. The highly energetic azides react with alkynes enabling a selective reaction that links reactive groups to one another. To obtain the oxidation state of the copper sodium ascorbate is added to the reaction. Furthermore a ligand like THPTA is necessary to keep the Cu(I) stabilized in aqueous solution.

In order to use the above explained advantages of click chemistry for the labelling of DNA and RNA azide or alkyne modified nucleotides have to be incorporated into the sequence (Fig. 2). Martin et al. have shown that yeast Poly(A) Polymerase is able to incorporate modified nucleotides with small moieties to the 3’ terminus. To obtain an internal modification it is necessary to ligate two part of DNA or RNA to each other via splinted ligation.

The versatile HRP-mimicking DNAzyme forms a G-quadruplex structure in which hemin can be bind. This enables it to catalyze the fission of hydrogen peroxide to water and a reactive oxygen species (ROS). Thus it can be used to catalyze chemiluminescence and a series of colorimetric reactions, known from the horseraddish peroxidase from Amoracia rusticana (Fig.3). As we show in our AptaBody project the HRP-mimicking DNAzyme can be used to generate a signal on a western blot. Here we directly blot the DNA onto the membrane and recover its activity after denaturing polyacrylamide gel electrophoresis (PAGE). For this after the transfer the catalytically important hemin is added to the DNAzyme which results into catalytic activity on the membrane.

The HRP-mimicking DNAzyme forms a G-quadruplex that binds hemin in its active center. In this conformation it is able to activate classical HRP substartes.

The labelling RNA for alkyne modification was transcribed via in vitro transcription. The reaction, modifying the labelling RNA was catalysed by yeast Poly(A) Polymerase (PAP) in the compatible PAP buffer with 3 different alkynes (5-Ethynyl-dUTP, C8-Alkyne-dUTP, C-Alkyne-dCTP) for 2 hours at 37 °C. 200 nM of modified RNA was incubated in 50 mM phosphate buffer (pH 7) with 400 nM Alexa 488 azide (solved in DMSO and stored at 4 °C). 1 mM CuSO4 and 5 mM Tris(3-hydroxypropyltriazolylmethyl)amine (THPTA) were mixed and added to the reaction. Eventually, 1 mM sodium ascorbate (NaAsc) was added. The final reaction volume was 50 µL. Incubation time ranges between 12 to 14 hours at 37 °C.

All blotting was performed with ssDNA or ssRNA that was separated on a denaturing PAGE. The DNA and RNA after staining with ethidium bromide (EtBr)was transferred onto a nylon membrane in a semidry blotting apparatus from Biorad in 0.5x TBE by applying 10-20 V for 35 min. Samples were immobilized with NaOH. Refolding of HRP-mimicking DNAzyme was performed in HRP-mimicking DNAzyme buffer that was supplemented with 100 mM hemin for 10 min. Excessive hemin was washed away by washing with the same buffer without hemin for 5 min. Blots were developed 5 min in in SuperSignal™ West Pico Chemiluminescent Substrate and imaged on a ChemoCam from Intas.

In figure 4 one can see three labelling RNAs each having different modifications respectively having either a C8 Alkyne-dUTP, 5-EdUTP or C8 Alkyne-dCTP incorporated. The Alexa 488 scan indicates that one Labelling RNA + 5-EdUTP was modified with an alkyne and that the CuAAC reaction was successful, too.

Left: Gel scanned in Alexa 488 mode on Typhoon scanner. Right: Same gel scanned after SYBR Gold stain. The sample incubated with 5-Ethynyl-dUTP was fluorescently labeled after click reaction. The only band that could be detected in the flourescent scan overlayed with the band of the mentioned sample in the SYBR Gold stain that detects all nucleic acids.

EtBr stained gel could detect amounts to 60 pmol of HRP DNAzyme while the luminol on the membrane could get 10-fold lower.

The activity of the HRP-mimicking DNAzyme is recovered after the transfer to a nylon membrane. In Fig. 5 different amounts of HRP-mimicking DNAzyme are blotted onto a nylon membrane. After the immobilization of the DNA with NaOH the hemin that is necessary for the catalytic activity of the DNAzyme was incorporated into the G-quadruplex by incubating the membrane in HRP-mimicking DNAzyme buffer supplemented with 100 µM. After this step the catalytic activity was recovered. When still in the denaturing polyacryl amide gel the DNA however is not able to produce reactive oxygen species and thus activate a HRP substrate as for example luminol.

On top of that Fig. 5 shows that on the EtBr stained gel we can detect amounts to 60 pmol of HRP DNAzyme while we get 10-fold lower with the luminol readout to 6 pmol on the blot.

In Fig. 6 you can see that ssDNA with HRP-mimicking DNAzyme was successfully separated from RNA and DNA of a different size on a denaturing PAGE. In Fig. 6 A the same samples as in B and C were stained with SYBR Gold. Fig. 6 B depicts the gel stained with EtBr that was plotted onto the membrane shown in Fig. 6 C. On the blot the HRP-mimicking DNAzyme that could not be detected on the EtBr stained gel was detected.

On the blot the HRP-mimicking DNAzyme that could not be detected on the EtBr stained gel was detected. The blot depicts specifically only the bands of interesst (HRP DNAzyme) an no other nucleic acids that were detected on the SYBR Gold stained gel.

Both methods are useful methods to visualize short ssDNA and ssRNA as a safe alternative to radioactive labelling. Any DNA of interest can be ordered as oligo with a HRP-mimicking DNAzyme sequence connected to its 5’ or 3’ end. If longer DNA or any RNA is to be labeled with this DNAzyme splinted ligation of two DNA stands using an complementary short DNA sequence called splint can be performed.

For the click chemistry application we showed that alkyne modified nucleotides can be added to the 3’ end of a RNA with yeast Poly(A) Polymerase. Which afterwards allowed specific labeling of the RNA of interest. This terminal modification can be turned into an internal modifications by ligating two RNA parts together using a DNA splint. Incorporating the alkyne opens up a variety of possibilities because via CuCCA every azide activated molecule or even protein can be covalently connected to it. Lorenz showed that an azide activated protein horseradish peroxidase (HRP) can be attached to an alkyne modified RNA. This protein-enzyme HRP amplifies the signal and thus increases the sensitivity of the assay.

Furthermore specific detection of RNA or DNA is possible with both strategies. For example the detection of a cleavage products of RNA-cleaving DNAzymes proofed to be difficult because the cleavage products were running at the same height as the DNAzyme itself. Thus the possible appearing of this product was hidden by the DNAzyme band. We tried to address this problem by the addition of DNase I to our samples to digest the DNA but the DNase I was not able to digest all of the ssDNA from the sample as it is more efficient for dsDNA. To visualize the RNA of interest only we planned to connect the HRP DNAzyme to it via splinted ligation (see Fig. 7). This would enable us to see bands on two different heights on the blot only: the cleaved part that contains the HRP DNAzyme and also the uncleaved substrate.

We faced the problem of detecting RNA of similar size again with the in vitro assay of the twin ribozyme. Here we could not use the HRP as readout because the sequence is conserved from the 5’ end throughout the 3’ end. Thus the internal modification of the RNA with a CuAAC activation seemed suitable.

Connecting RNA to the HRP be is a way to multiplex assays similar to the one we described in our small molecule detection project. We tested for one target in one sample by adding a switchable hybrid of HRP-mimicking DNAzyme and F8 DNA-cleaving DNAzyme. By the self-cleavage of this construct in presence of the ligand that triggers the activity of the F8 DNAzyme the HRP DNAzyme activity was recovered leaving two different cleavage products. Those can be separated on a PAGE and blotted afterwards. The blotting step allows for multiplexing of this system. Many different versions of the same construct switchable with different ligands can be added to one sample if the cleavage products are designed to have characteristic sizes.