Fluorescent molecules absorb light of a certain wavelength - the excitation wavelength - and emit light at a longer wavelength - the emission wavelength. This longer wavelength corresponds to lower energy photons, which means that part of the excitation light's energy is dissipated. In addition, energy is lost along the path of the light rays: when passing through mirrors and aperatures etc. Overall, energy losses due to the poor quality of optics for fluorescence microscopy may result in the total inability to detect fluorescence in biological samples, which is often very weak anyway.

For OpenScope, we have designed a module for epi-fluorescence imaging (epi meaning "from above"). The pathway of light is illustrated below: How do you choose the appropriate filters for the particular fluorescent protein that you need to image?

In summary, features of a good filter set (three filters required in total in this setup) are:

These are the features that we look for in the graphs that the script produces.

For commercial microscopes, full filter sets are readily available. However, for the OpenScope, we had to source and pick the filters ourselves. Each filter is characterized by its transmission curve: the percentage of light it transmits at particular wavelengths. This information is available directly from the retailer or can be obtained by spectrophotometric analysis. However, the graphs themselves are not very helpful in choosing the best filters you need. A short python script was developed that helped us assess the expected performance of different filter combinations. By modeling the excitation and emission spectra as Gaussian distributions and analyzing the spectrophotometric data about each filter, we could predict and justify filter sets which worked and those that didn't. The script is included in the download (see below) and commented to explain exactly how it works. In short, it rescales the light intensity at all wavelengths after interaction with a filter with given specs (using simple multiplication). As an output, the program produces 4 plots, from which it is easy to visually assess the performance of the filter set.

The code in the package contains our worked GFP example. If you want to adapt the code for your own use simply swap the text files for files containing the specs of your filters, and make sure to change the excitation and emission peak wavelengths in the script.

Note: To run the script you will have to install Python. If you do not already have it, installation instructions are available on the Python Wiki.

This is the output of the program for the filters used in OpenScope for imaging GFP:

Fig 1: The raw specifications of the filters

Fig 2: The excitation light (blue) reaching the sample: the LED spectrum scaled by the effect of it passing through the excitation filter and being reflected by the dichroic mirror. Note the high intensity peak at around 476nm, which is the excitation wavelength for the type of GFP we are imaging.

Fig. 3: The emission light (green) from the sample reaching the CCD: the approximated spectrum of emission (with its characteristic peak at around 512nm for GFP) scaled by the effect of light passing through the emission filter and the dichroic mirror. Note the high contrast (ratio of peak intensity to background intensity) - it is essential for successful imaging.

Fig. 4: The excitation light that reaches the CCD. This occurs because the dichroic mirror in practice is not ideally reflective. The intensity of this signal is very low, which enhances the quality of the image: had it been higher, blue artefacts would haver been observed.

With this setup we managed to capture images of GFP fluorescent beads and some GFP-expressing E.coli. The filters used, supplied by Comar Optics, are:

(Note: this did not work in practice)

We wanted to image RFP (exictation: 584nm, emission:607nm) with OpenScope, as a part of our Collaboration with Glasgow iGEM Team. However, it was difficult to find low-cost dichroic mirrors that are transparent to wavelengths around 607 nm while being reflective to wavelengths around 584 nm. In addition, sourcing bright LEDs (for excitation) with an emission peak in the region of 584 nm was not possible. As such, the LEDs used had an emission peak at 591nm, which is closer to the transparency region for the dichroic mirrors. Overall, RFP imaging has not yet been demonstrated as a proof of concept. Perhaps this could be a starting point for future iGEM teams looking to build on the OpenScope project. 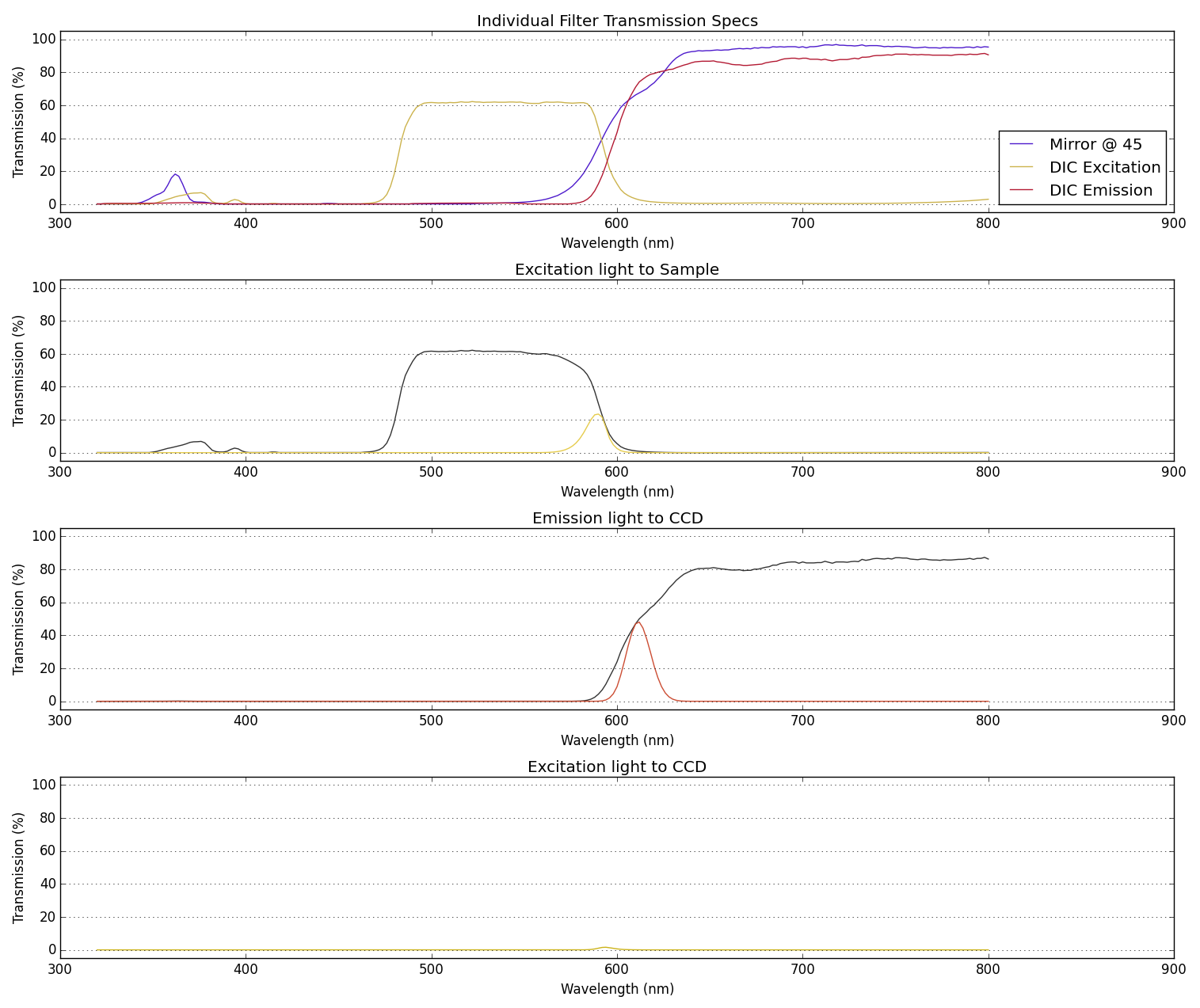 Above is the analysis of the filters we tried to use. The problem with the set is clear from the second plot: low intensity of excitation light (yellow) reaching the sample. This, in turn, means that less fluorescent molecules are excited, so actually the fluorescence output (red) is also scaled down.