Screening System - A Potential use for OpenScope 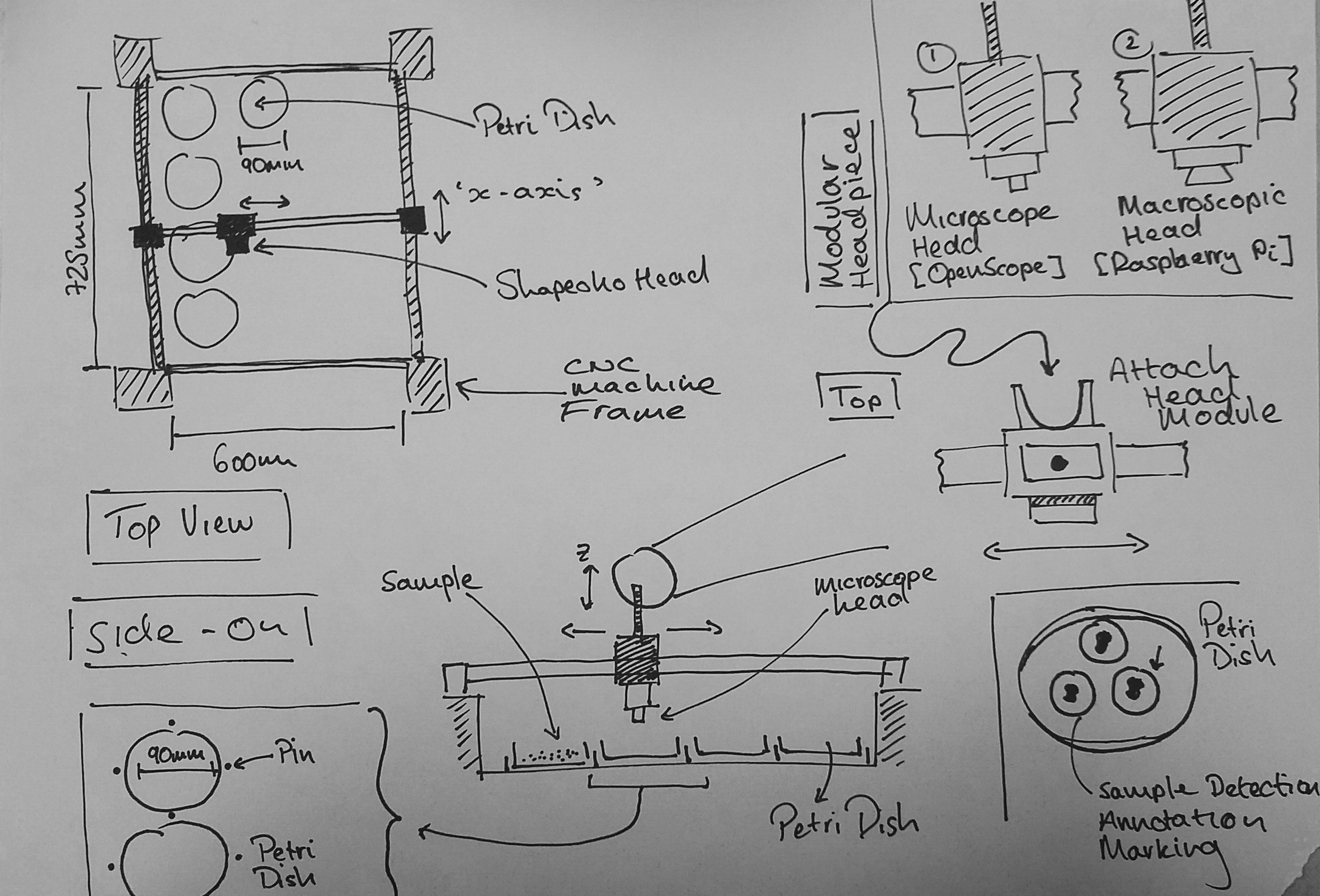 To integrate OpenScope onto a desktop translation system (CNC), such as the Shapeoko, implementing an automated, high-throughput screening system for Enhancer Trap, Forward Mutagenesis and Reporter screens in Marchantia and potentially yeast. This involves sample scanning, detection and labelling, after macroscopic and microscopic imaging in brightfield and fluorescence.

Theoretically, the calculations go as follows:

In short, after doing this math, we almost gave up on the idea. However, after some more maths, we came up with a...

Preliminary scanning can be carried out with a macroscopic (normal) camera. The image recognition software can then scan for whole colonies or Marchantia plants within the recorded images. This turns out to be much more feasible:

This approach significantly reduces the number of images and time required to cover a whole plate. When image recognition software is implemented, it is possible to label areas of interest within the whole sample field. These specific areas can then be imaged by the microscope head attachment independently. 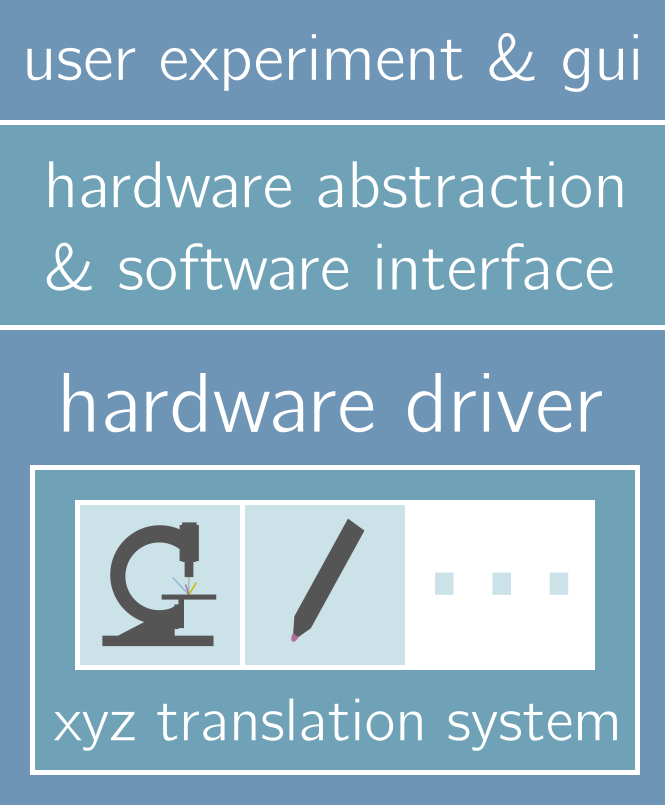 We began to develop some python libraries to automatically manage this process, with an architecture as seen in the image to the right. The software in its current state is available within the 'lib' and 'hw' directories in our Github repository, which can be found on our Downloads page (or go here to look for future revisions). It is based around a series of abstraction layers with the ultimate goal of hiding any underlying hardware and allowing easy automation of experiments. Our example use case is an automated screening system as described above, whereby a macroscopic camera images a large sample set, software is then used to identify individual samples which are independently imaged by a microscopic camera, finally these images are screened (using a range of image processing algorithms) to identify different phenotypes.

These drivers use a common software class to unite their differences under a common language. In this way we can abstract away from all the intricacies of each hardware head and control the hardware with ease. There are a few key classes we use here. The Head class (and Camera subclass) are used to refer to the hardware heads. The xyz stage is interacted with via the Stage class which allows for calibration, xyz movement, and head switching. Finally we unite everything under the same roof with the Workspace class. This class manages all the software commands we might send, utilising a smart queue to optimise the order in which actions are taken to reduce movement and time (and respecting the order of commands when necessary, e.g. if you’re transferring liquids with a pipette!). The workspace is the middleman through which user experiments communicate to the hardware. The last class of interest is the Canvas class. This class is responsible for collecting, and managing the stitching together of, the images that constitute an individual sample, as well as updating it periodically as necessary in case a time-lapse image is desired.

Finally comes the interesting part, your experiment! Though we don't yet have examples of this, thanks to the library abstractions provided in the lower layers, writing these experiments should be unprecedentedly easy. Python is one of the easiest languages to learn for those who are new to programming, and so should make even very complex experiments easy. See our MicroMaps page for more information on the image processing algorithms that we have been developing to characterise specimens. We have also been developing an extensive and powerful Graphical User Interface (GUI) to manage and observe your experiment, checkout our WebShell and MicroMaps interfaces under our Software section!

The automated experimental abstraction layers were developed by Will, with useful feedback and advice from the rest of the Software team.

Macroscopic imaging of a Petri dish containing mature Marchantia samples was carried out. Images were captured manually through the Webshell during 1-2 minutes of operation. A Raspberry Pi camera was fixed to the CNC (in our case a Shapeoko v1, 150GBP second-hand) with a 3D-printed static mount. The motorised z-axis driven by the python program allowed for focusing of the sample. Seven images were successfully stitched, in a remarkable stitching time of 1.5sec. It is notable that the stitching algorithm copes well even with frames which are rotated at a small angle relative to each other. Incorporate of OpenScope onto the CNC head.

Develop colony screening for yeast/bacterial colonies on Petri dishes. Criteria such as distinct colour or fluorescence can be incorporated into the image recognition software. However, the fluorescence imaging achieved on OpenScope is not currently reliable enough to perform fluorescence screening.

Implement focus-stacking software for 3D samples (like Marchantia). This facilitates the development of programs which track the growth of samples.