Characterization and Investigation on AraC-ParaBAD BBa_I0500

The 2014 HKUST iGEM team had previously submitted characterization data for part BBa_I0500 that described an all-or-none behavior of the promoter. That is however not true. We discovered a few issues in reproducibility and interpretation. Essentially, our result from 2014 did not fully capture the arabinose sensing range. The all-or-none response reported on pSB3K3 was also an artifact, where dead cells from an old plate interfered with fluorescent readings.

We sincerely apologize for the misleading information that we provided last year. To remedy for that, we decided to re-characterize BBa_I0500 in a more rigorous manner, using the construct BBa_I2031. To do so within limited time, we headed for a deeper characterization instead of measuring multiple properties (e.g. induction time).

Our results demonstrated that this promoter 1) has a graded induction response, 2) has different sensing ranges on plasmids with different copy numbers, and 3) does not display all-or-none behavior on a single cell level when expressed from a low copy plasmid. We have uploaded our results to the Experience Pages of BBa_I0500 and that of BBa_I2031. 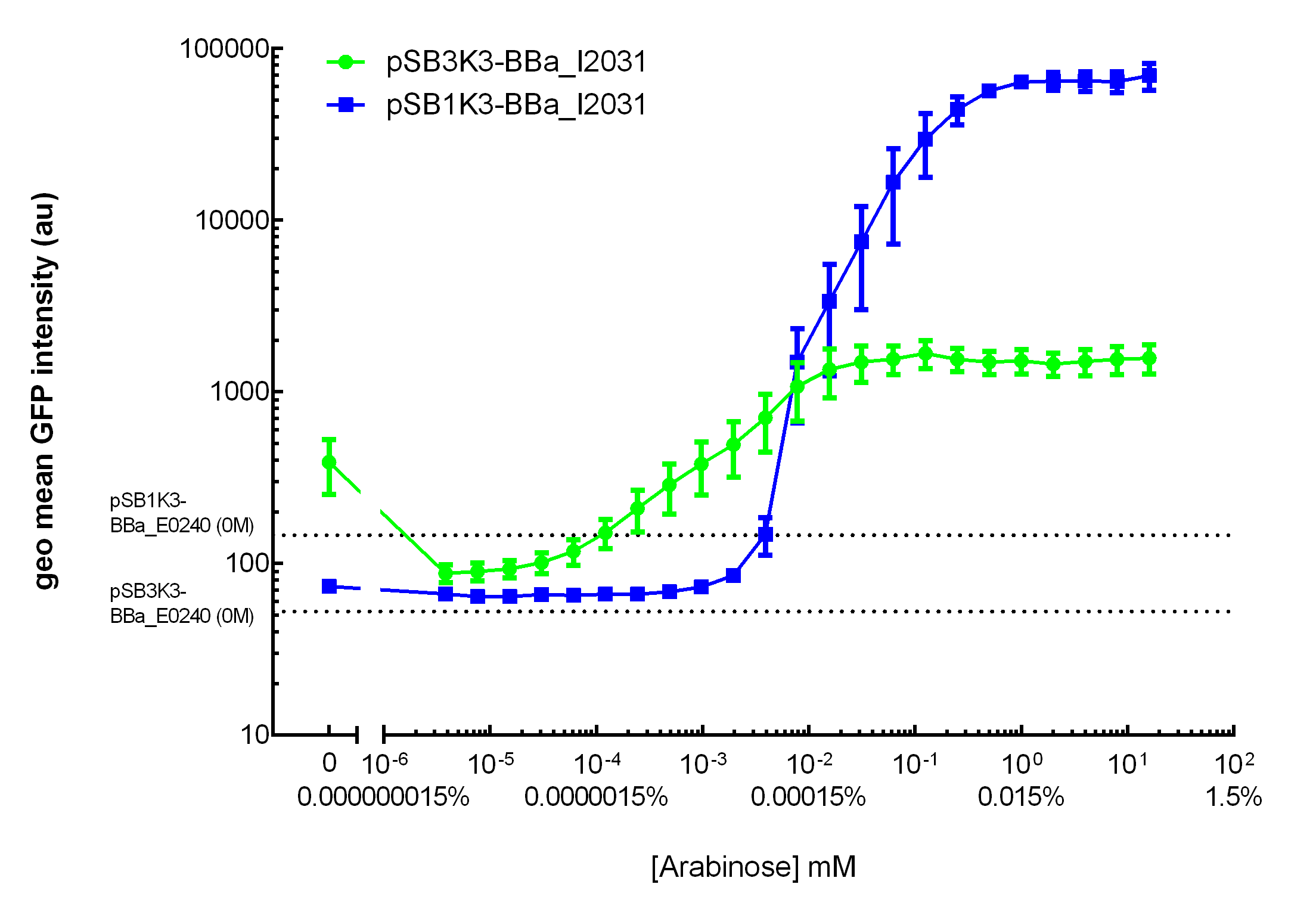 BBa_I2031 appeared to be giving less fluorescence in low arabinose concentrations when placed on the high copy pSB1K3 plasmid than on low copy pSB3K3 plasmid, and the value is even lower than the auto fluorescence observed from the negative control (DH10B / pSB1K3-BBa_E0240). It might be interpreted that the promoter BBaI0500 is less leaky when placed on a high copy plasmid.

*For a more detailed comparison between our results and previous characterizations, please refer to our detailed report. 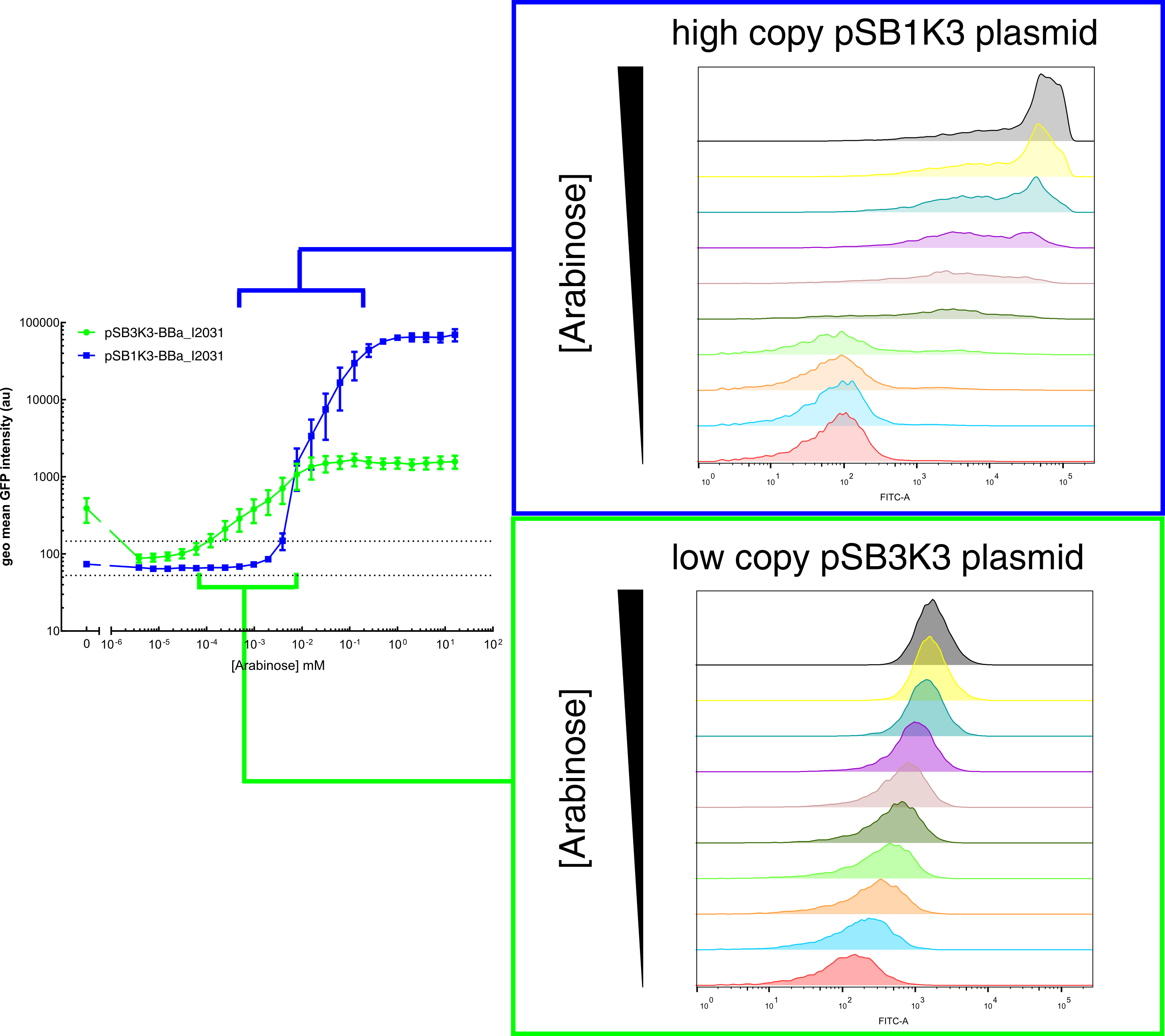 The all or none behavior of ParaBAD on a single cell level has been reported in a number of literatures (Fritz et al., 2014; Khlebnikov et al., 2000; Khlebnikov et al., 2001; Siegele and Hu, 1997). It refers to the phenomenon that an increase in arabinose concentration does not result in an increase in promoter / gene activity per se, but rather, increases the proportion of population that are fully induced.

In concordance with literatures, we observed an all-or-none induction when BBa_I0500 is placed on a high copy plasmid, where induced cells were mostly distributed among two bins of fluorescence. Yet on low copy plasmid, the induced populations remain homogenous along the arabinose concentration gradient. Since all literatures before have been using high copy plasmids for the study of ParaBAD, we believe the homogenous expression of ParaBAD promoter from a low copy plasmid has been a long overlooked issue.

Our misuse of BBa_I0500 and its part documentation issue

Lastly, we would like to warn potential users of this part not to drive expression of riboregulators (Isaacs et al., 2004) using BBa_I0500. This ParaBAD promoter promoter contains a 19bp sequence after the transcription start site, which would produce a taRNA with additional nucleotides at its 5’ end, and rendering it incapable to activate crRNA. Relative Promoter Unit measurement (Kelly et al., 2009) for this BioBrick is also inappropriate because the mRNA produced from BBa_I2031 would contain these extra 19nt when compared to that from BBa_I20260. To avoid misuse of this part due to incognizance of its sequence information, we recommend users to look up BBa_K1067007 for annotations.

For a detailed doucmentation of this characterization and the materials or methods used, please refer to our PDF version of this investigation.