To fully appreciate the mechanism of our biosensor and its behavior in an ideal situation, we explored the structure and dynamics of our system by creating a mathematical model of the reaction kinetics. We studied the dynamics of the Kdp system using a PKdpF - GFP generator (BBa_E0240) in pSB3K3 backbone in a DH10B E. coli strain. Ordinary differential equations were derived to demonstrate how potassium ions concentration interact with the endogenous Kdp system, thus affecting the GFP expression of the cell. Modeling was done using MATLAB R2015a.

In addition, by using the prediction model, users of our potassium biosensor can estimate the potassium concentration of cultures and mediums by obtaining fluorescence intensity per cell using flow cytometry.

The effect of the endogenous Kdp system of E. coli was neglected.

In our engineered E. coli, titration by the endogenous kdp operon of the transcription regulator, phosphorylated KdpE which binds to PKdpF, was expected initially. This titration of phosphorylated KdpE is anticipated to lower the expression of GFP. However, since the native DNA copy number is only an 11th of the pSB3K3 plasmid copy number, the effect of endogenous Kdp system was neglected.

In accordance to [Kremling A. 04], for the potassium ion concentration range which we were studying- 0 mM to 0.02 mM, the fluctuation of the concentration of KdpF as well as KdpD and KdpE was only within 10 μM and 3 μM respectively. Due to the small fluctuation range compared to the gene expression of GFP reporter, it was reasonable that KdpD, KdpE and KdpF concentrations were assumed to be constant in the model.

It was assumed that the initial concentration of mRNA for GFP, immature GFP and mature GFP was zero.

It was assumed that all reactions below were in steady state such that:

Equations of the Model: 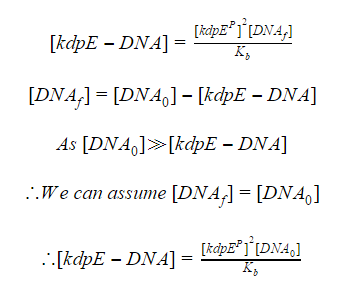