Nitrate as a Macro-nutrient

Nitrate is an important nutrient for plant growth, as it allows them to make amino acids and in turn, proteins. To ensure good crop yield, farmers must ensure that their soil has sufficient nitrates. They often do this by adding (often too much) fertilizer to their soils.

Here we characterize a native E. coli nitrate sensor that can be used as a biological sensor on the field to detect soil nitrate levels, and thus prevent the overfertilization of fields and the negative environmental effects associated with that practice.

In order to develop and characterize a nitrate sensing system for E. coli, we utilized the native NarX-NarL two-component system. NarX is a sensory histadine kinase that selectively phosphorylates NarL, the cognate response regulator, in the presence of extracellular NO3-. Phosphorylated NarL, in turn can bind to promoters to regulate downstream gene expression. 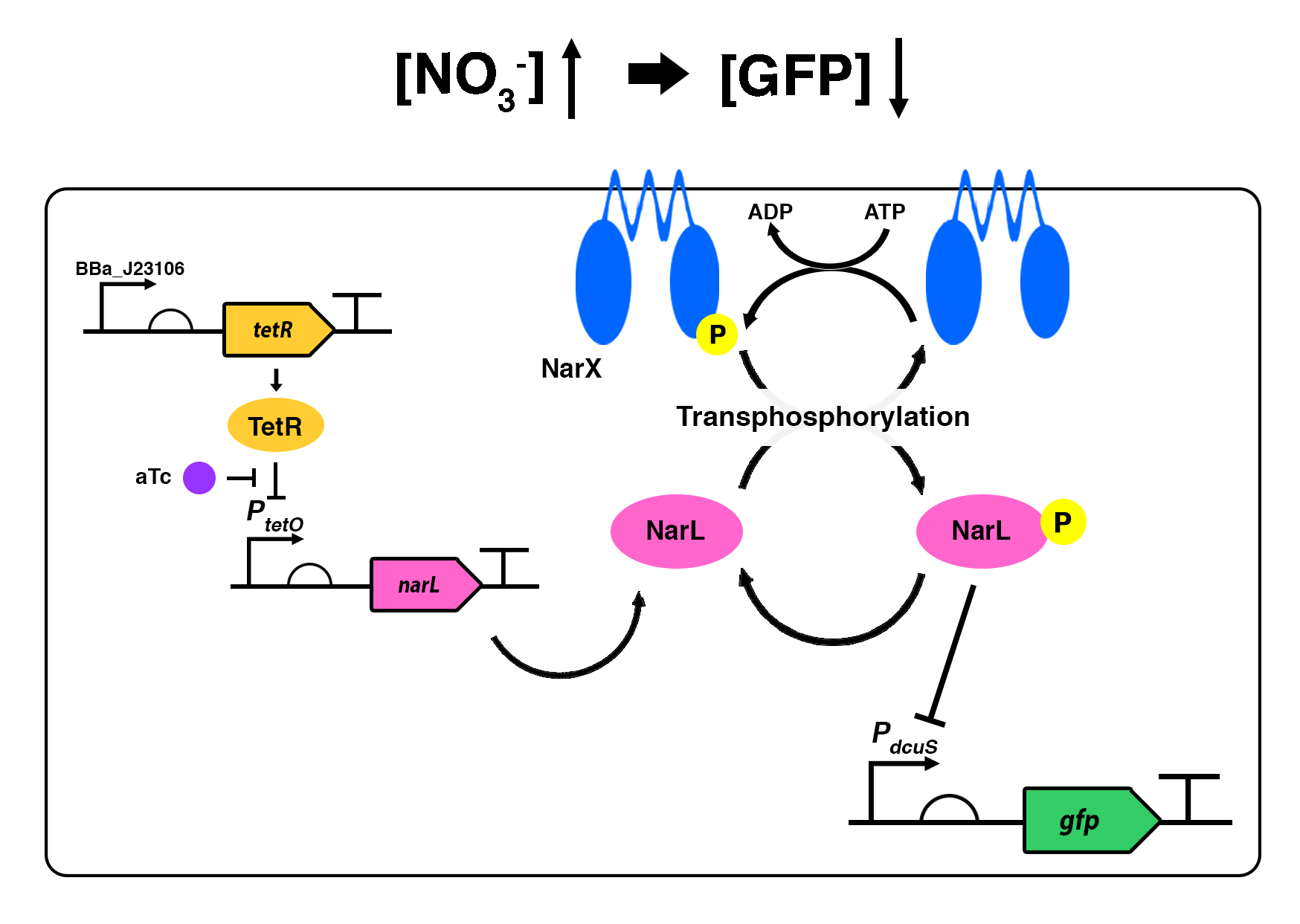 Although many promoters have been characterized and the consensus DNA-binding sequence is identified, most promoters also contain FNR sites and are regulated by other systems (Darwin & Tyson, 1997). We identified the promoter region upstream of DcuS as a potential promoter that recognizes NarL and is independent of other systems (Goh & Bledsoe et al., 2005). Based on the protein-DNA interactions described in Goh, we selected a 73bp region directly upstream of the +1 promoter site as a potential repressible promoter in the presence of NO3-

pND16 was constructed based on pRS334 (courtesy of Tabor Lab, Rice University), a high-copy (ColE1 origin) plasmid in which expression of sfGFP is controlled by the dcuS promoter (PdcuS) and expression of NarL can be controlled via an aTc-inducible TetR-Ptet one-component system. This allows us to regulate levels of cellular NarL compared to native NarL and NarX to tune the sensitivity and dynamic range of the sensor. Since NarL is chromosomally expressed in E. coli, this plasmid was transformed into a NarL knockout strain of BW29655.

Finding the proper aTc induction level to activate the sensor

We wished to see at what levels of aTc the sensor performed at. Thus, we characterized the sensor’s fluorescent output for 5 different aTc concentrations. The data below indicates that at even our lowest nonzero aTc level, the system was saturated with NarL and thus was performing at its highest sensitivity.

We also noticed that there was a marked difference in fold change and in the K1/2 parameter for the system between 0 and 20 ng/mL aTc. This indicates that we may have built a sensor with tunable sensitivity, and was the inspiration for experiment 3. 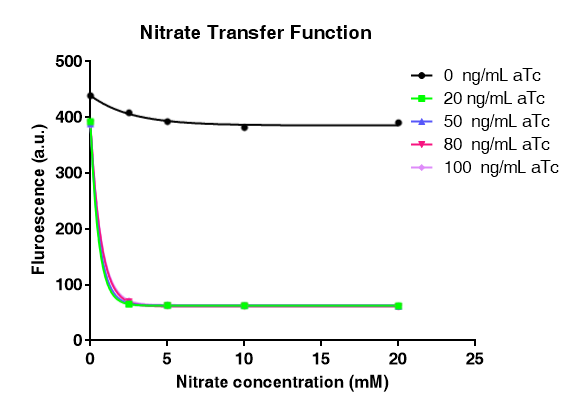 At this point, we chose our lowest saturating aTc value (20 ng/mL) and created a 12-point NO3- - fluorescence transfer function in order to better determine the system parameters.

A sigmoidal fit on the data below suggests that our system’s half-maximum occurs at .02 mM, equivalent to 1.25 ppm NO3- in the soil. The system also has a fold change of 7.15. 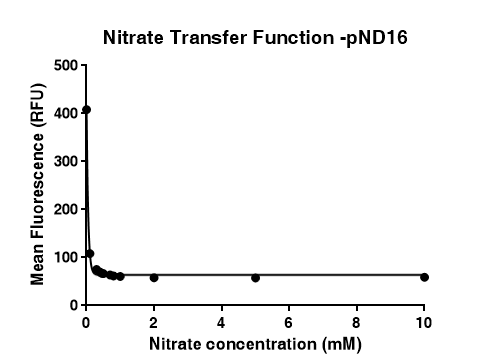 Taking information from experiments 1 and 2, we decided to try changing the sensitivity and fold change of the system by picking aTc values between zero and 20 ng/mL, the previous saturating value. 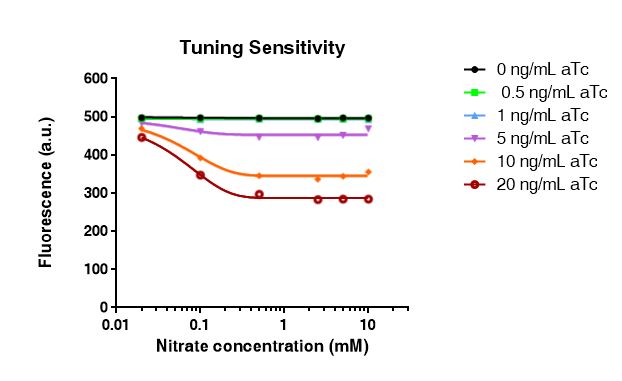 Our sensor works! It is sensitive enough to detect levels of nitrate below the typical levels in soil. By simply adding a chromophore as the reporter protein, thus system could be converted into a colorimetric nitrate sensor.