E. coli that glows in adequacy of NO3- - at a glance

An effort to make iGEM a better community

Nitrate is an essential nutrient which plays multiple roles in plant growth and reproduction. For example, it provides nitrogen that plants need for producing amino acids and nucleic acids (DNA and RNA). Also, it is a component of chlorophyll and is therefore essential for photosynthesis. 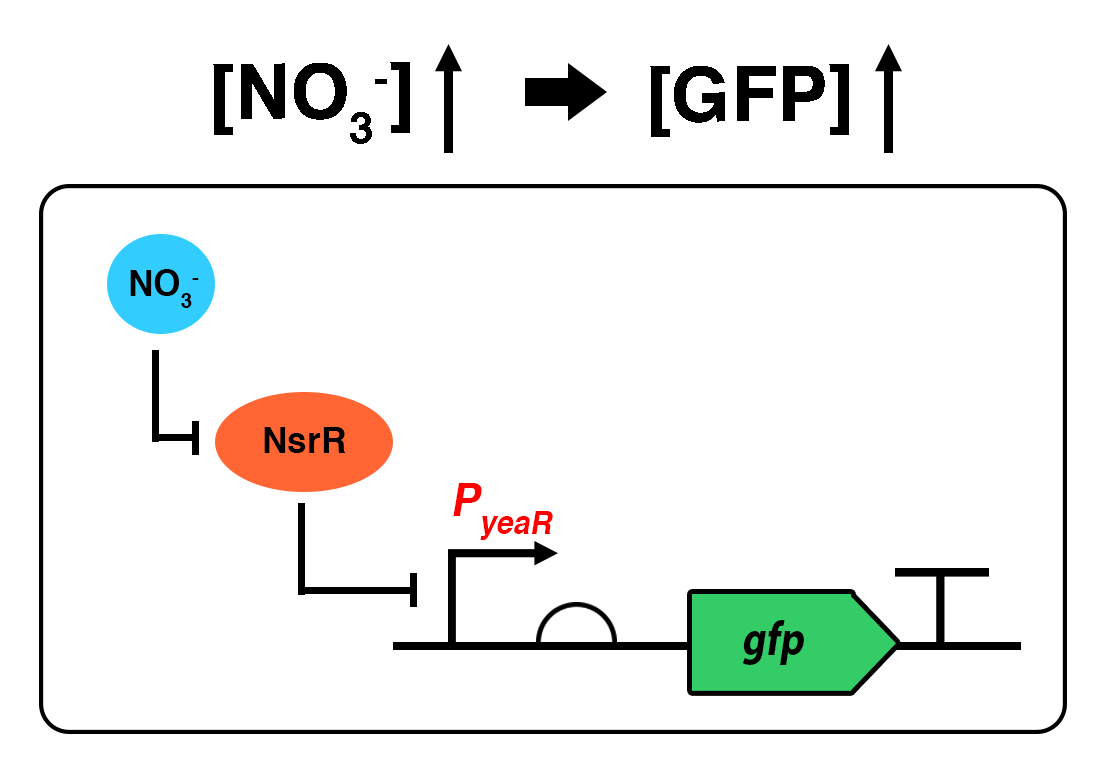 Escherichia coli (E. coli) detects environmental nitrate by the yeaR-yoaG operon. According to Figure 1, PyeaR (Lin, et al., 2007) is regulated by the Nar two-component regulatory system (Nohno et al., 1989; Li et al., 1987) and NsrR regulatory protein (Partridge et al., 2009). When there is nitrate or nitrite, the repression from the Nar system on PyeaR will be relieved due to the binding between the two. On the other hand, some nitrate will be converted into nitric oxide by nitrate reductase. Nitric oxide will bind to the NsrR protein and relieve the repression on PyeaR. As a result, any genes that are downstream of PyeaR will be expressed.

*The above text is our summarized understanding on NO3--sensing system. Please refer to our references section below for a full list of references cited.

After obtaining the quantitative results of GFP signal intensity using an EnVision® multilabel reader, the fluorescence signal were represented in fluorescence divided by biomass.

Dynamic range Characterization of PyeaR in LB and M9

*GFP emission measurements were made using an EnVision® multilabel reader. This result was obtained by combining 3 charaterization data obtained in 3 different days. Error bars were presented in SEM.

Please refer to our protocol page for the materials and methods used in characterization.