Our project explores complex communication in yeast communities, so we wanted to look at communication on other levels. We especially wanted to focus on how we as a team can communicate with the general public and other iGEM teams. Synthetic biology is often a misunderstood and enigmatic topic to the general public. One goal of our Human Practices was to bridge the often controversial divide between the public and synthetic biology through an easily accessible format - the Internet.

Millions of people use the Internet to search for explanations to difficult topics. Unfortunately, synthetic biology is often portrayed in an inaccurate light that encourages fear and misunderstanding. These sources do not do justice to the exact purpose of molecular techniques and how they can positively benefit human welfare, without infringing on ethical concerns. Our goal is to dispel these rumors and help the public understand synthetic biology in order to mitigate fear and misunderstanding in an easily accessible and engaging way. 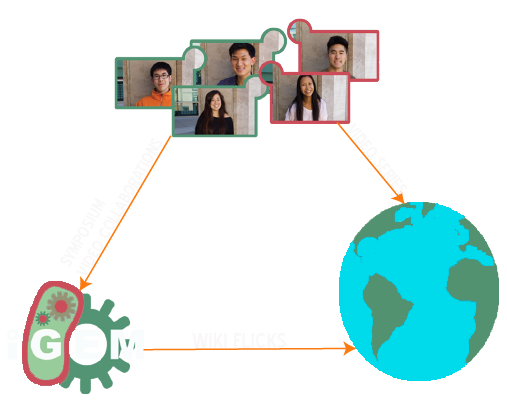 In addition, our project sought to increase communication with other research teams. We looked at the myriad of ways scientists (within and outside of iGEM) communicate their thoughts, projects, and ideas with each other. Some of these commonly used outlets include, but are not limited to, lectures, seminars, and published journal articles. However, social media is becoming a more prominent source of scientific outreach. More and more scientists are using websites such as Youtube, Facebook, and Twitter to convey their research.

Yet despite the increasing number of users in these social media sites, there still exists a large disparity between the science community/iGEM and the general public, especially within the field of synthetic biology. Our mission is to use the burgeoning field of social media to bridge this gap between the two communities.

Just like how yeast can communicate with both themselves and others, we began a video series to first figure out how individuals perceived synthetic biology and how they viewed the role of synthetic biology in their community. We started by interviewing passersby at the San Francisco Giants stadium and asking them what key synthetic biology terms mean to them: GMOs, genetic engineering, and gene cloning. Some of the responses were knowledgeable, but many associated these simple terms with overwhelmingly negative connotations. 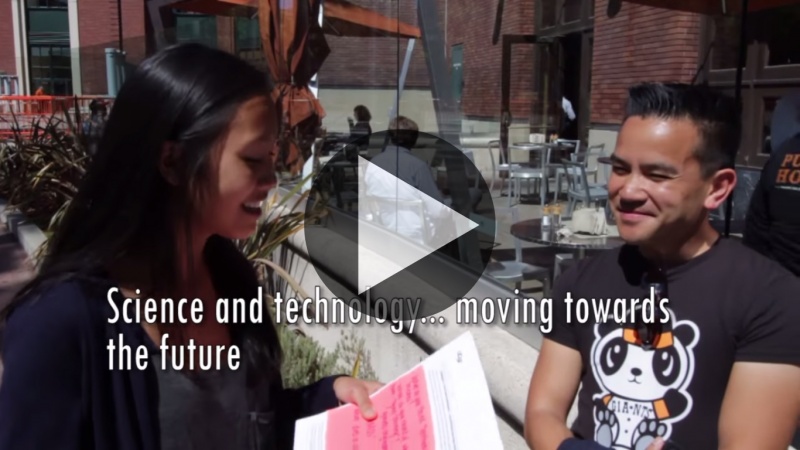 Our second video then concisely and accurately define those terms in an easily digestible video in hopes of erasing the negative stigma surrounding these terms. 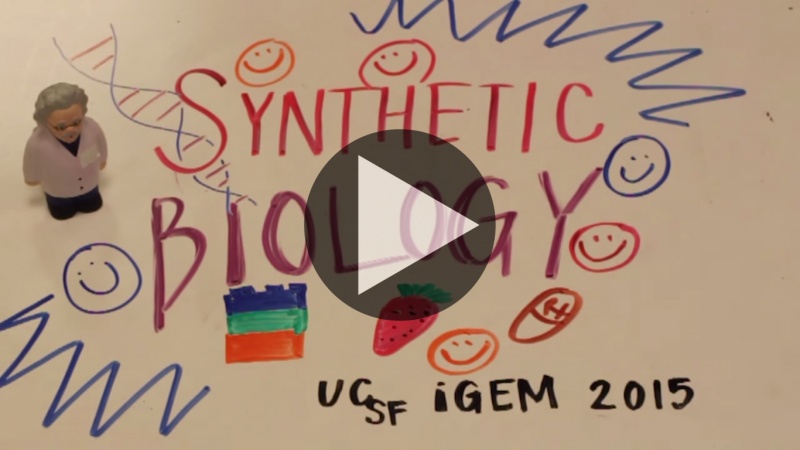 Ultimately, we wanted to elucidate the tremendous potential of synthetic biology and genetic engineering, and shed light on the many groundbreaking discoveries that have and continue to largely benefit mankind. Our videoblog was able to reach a wide audience on Facebook, SynBio101 video, and Wiki Flicks.

Our capstone effort in human practices for iGEM 2015 is Wiki Flicks. Yeast form complex communities by signalling to one another in a rapid yet carefully controlled signalling cascade. In imitation, we went directly to iGEM headquarters to spur a signalling cascade that would affect the entire iGEM community. In collaboration with TCD iGEM at iGEM HQ, we took advantage of the YouTube platform iGEM Academy to network with other teams to create short Wiki Flicks explaining projects in a fun and engaging way. These are short videos meant to describe a team’s project without the use of science terminology and jargon, with the key goal of being accessible to anyone.

We worked in collaboration with iGEM HQ and other teams to develop this idea, with the ultimate goal of making this a mainstay feature on future Wikis. This is an innovative approach to accomplishing our Human Practices mission because it fueled other iGEM teams to work together to reach the public, increasing our worldwide impact while also encouraging communication and collaboration with other research teams. As of now, we have 11 Wiki Flicks showcased in one platform. To watch the Wiki Flicks, click the button below.

Our yeast communicate with themselves in a positive feedback loop, which then affects the entire community through dispersion of specific signalling molecules. This self and neighboring communication model was represented in real time at the Sierra Systems and SynBio Symposium. Held at the University of Nevada, Reno, this two-day conference headed by our team advisor Kara Helmke and collaborators, enabled undergraduate and high school students to present their synthetic biology research to peers through team and poster presentations. We invited all area iGEMers, and five iGEM teams from universities and colleges in northern Nevada and California attended the Symposium. At the Symposium, iGEM teams and high school/undergraduates alike shared their individual advances in synthetic biology research. The conference stimulated discussion to improve projects, drove the development of long-lasting connections, and encouraged future collaborations. Due to enthusiasm by local universities for this type of effort, this conference was provided at no cost to attendees, including all meals and lodging. Cost is a major deterrent for high school students and undergraduates to attend scientific conferences, and the goal of this new Symposium is to provide an accessible forum for high-level scientific discourse at the undergraduate level. We believe our efforts at this conference helped provide a link between iGEM researchers and high school/undergraduate researchers in the synbio labs, allowing us all to meet each other and form a true synthetic biology research community.

Unfortunately, we soon realized realize how vastly we underestimated the difficulty of our mission. In particular, we encountered numerous challenges in the effort to improve communication between the synthetic biology community and the general public.

Although YouTube boasts of 1 billion users, the popular video sharing site is not accessible in all countries. Our team reached out to countries where YouTube is unavailable to figure out the best ways they can communicate their own projects to the general public.

Due to time and logistical constraints, we were unable to create a separate Wiki Flicks website with the capacity to host many high resolution videos. Instead, we worked in partnership with Trinity College Dublin iGEM to revamp their iGEM AcademyYouTube page to showcase these Wiki Flicks. In the future, we want to host Wiki Flicks on our own platform accessible to everyone everywhere. In discussions with iGEM HQ, we are hopeful that a future upgrade of the iGEM server will also allow for more media content to be posted and shared, making this a more accessible feature for all iGEM teams!

Our first outing engaging the public at the San Francisco Giants Stadium was a sobering experience. We quickly realized not only the common misconceptions surrounding synthetic biology, but also the sometimes inflammatory feelings and prejudices that the public associated with it. After our first video posted, one of the participants interviewed contacted us and explained he felt he was portrayed in a negative light -- something we did not believe, nor intended to show.

This experience was very eye-opening to the challenges in communicating with clarity and intention, and we took it to heart. This ultimately led us to the Wiki Flicks idea, and drove us to create an easily accessible platform that could reach a general public through simple, creative, and engaging short videos.

Some videos were made in the iGEM team’s native language, which limits audience accessibility. Similar to how yeast communicate with the universal signalling molecule, alpha factor, in the future, we suggest that Wiki Flicks should include English subtitles since it is the universal language of peer-reviewed science research.

Should Wiki Flicks become a staple in future Wikis, it will encourage communication within the scientific community in a forum that is universally accepted and understandable while the general population in diverse countries will still be able to participate.