A microbial fuel cell(MFC) is an electrochemical device which converts the chemical energy of fuel to electrical energy by the catalytic actions of microorganisms.[1]

Compared with energy from fossil fuel, such as oil and coal, MFC is of plethora advantages over other kinds of energy generators, e.g. wide sources of reactant, no emissions of environmental polluting gases (such as SOx, NOx, CO2 and CO), high conversion in theory, mild reaction condition, as a result, lack of sonic pollution, and so forth.[2]

Benefited from those merits, MFCs have a wide range of potential applications. For example, MFCs are suitable for powering electrochemical sensors and small telemetry systems to transmit obtained signals to remote receivers while traditional batteries cannot because of restricted lifetime and frequent changes and recharges. Additionally, realistic energetically autonomous would probably be equipped with MFCs that utilize different fuels like sugar, fruit, dead insects, grass and weed. Such systems can solely power itself by MFCs to perform some behavior including motion, sensing, computing and communication. [3] 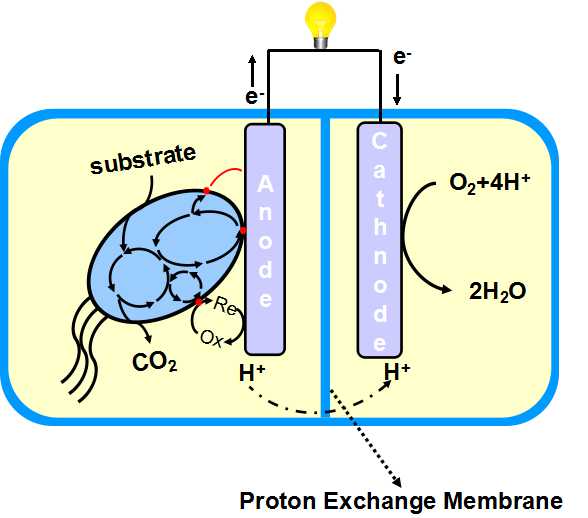 Of all the MFCs above, Shewanella species are best known for extracellular electron transfer(EET). Shewanella, a facultative anaerobe, has been widely used as a model anode biocatalyst in MFCs due to its easiness of cultivation, adaptability to aerobic and anaerobic environment and both respiratory and electron transfer versatility. They are able to exist in various kinds of environments and couple the oxidation of organic substrates such as riboflavins to the reduction of a wide variety of electron acceptors. When the electron acceptor are electrodes, their characteristic of transferring electrons from the cell surface to conductive materials shows great potential to improve the efficiency of bioelectrochemical systems. As a result, Shewanella has become the most widely used bacteria in MFCs.[5]

Microorganisms rarely live in isolated niches. More than 99% of microorganisms in environments cannot be successfully cultured by traditional cultivation technologies; one reason is that the maintenance of viability of these microbes may need supplementary metabolites or other signaling chemicals provided by other microbes in the ecosystems and communities. [6]

Engineering cell-cell interactions and communications is at the central point of engineering synthetic communities. The interactions between microorganisms are ubiquitous and play a central role in determining the fate and evolutionary dynamics of individual organisms in microbial consortia, as well as system properties such as stability and dynamics of the entire communities.[6]

Also, delineation of interaction modes between microorganisms in natural niches could facilitate engineering novel microbial consortia and their traits. The interactions within the microbial ecological communities may have a null (0, or neutral), positive (+, beneficial or win), or negative (-, or detrimental or loss) impact on the partner microorganisms involved. Thus, the binary interaction outcomes could be classified into six different categories of pairwise interaction modes , i.e., neutralism(0/0), commensalism (+/0), amensalism (-/0), mutualism (+/+), competition (-/-), and parasitism or predation (+/-). [6]

The win-win relationship of symbiotic association is mutualism (+/+), in which both partner microorganisms derive benefits from one another. e.g., Stable co-culture in the same bioreactor was achieved by designing a mutualistic relationship between the two species in which a metabolic intermediate produced by E. coli was used and functionalized by yeast. This synthetic consortium produced 33 mg/L oxygenated taxanes, including a monoacetylated dioxygenated taxane.[7]

Commensalism (+/0) is a relationship in which one partner derives benefits from the other, while the other partner is not affected (neither harmful nor beneficial) by the association, e.g., an artificial microbial consortium consisting of Ketogulonicigenium vulgare and Bacillus megaterium for vitamin C production.[6]

Inspired by the concept of co-culture system, MFCs populated by mixed microbial communities have garnered much attention owing to their stability, robustness due to nutrient adaptability, stress resistance and general tendency to produce higher current density than those obtained using pure cultures. e.g., a mutualistic system established by the fermentative bacterium Escherichia coli and the dissimilatory metal-reducing bacterium Shewanella oneidensis in a bioelectrochemical device is reported with formate as the key metabolism.[8]

4.1 Theory of protein degradation in bacteria

Bacteria co-translationally tag stalled or interrupted translational products with the ssrA peptide. This 11-aminoacid signal, targets the defective translation product to cellular proteases, including ClpA/XP, Lon and etc. The ssrA signal is encoded by a small, stable RNA containing an alanyl tRNA domain and mRNA domain encoding the open reading frame of the tag (tmRNA). Upon encountering stalled or incomplete translation, the tmRNA and accessory factors are recruited to the ribosome to rescue the idle translation complex by replacing it with the tmRNA encoding the ssrA tag. The ssrA mRNA serves as the template for the addition of the ssrA peptide. The ssrA tag is added co-translationally to the carboxy-terminus (C-terminus) of incomplete proteins to target them for.[10]

Interestingly, the ssrA tags encoded by the tmRNA molecules in most Mycoplasma are very different from those found in other bacteria. Most Mycoplasma genomes encode only two AAA+ proteases, Lon and FtsH, and have lost the genes for ClpXP, ClpAP. In the absence of ClpXP, the unusual Mycoplasma ssrA tag could serve as a degradation signal for the endogenous Lon or FtsH proteases.[11]

It has been shown that the ssrA tag sequence of M. florum (mf-ssrA) is efficiently recognized by the M. florum Lon protease (mf-Lon). Appending this tag to the C terminus of native or denatured proteins resulted in their rapid proteolysis by mf-Lon. Furthermore, mf-Lon did not degrade proteins bearing the E. coli ssrA tag (ec-ssrA), and E. coli Lon (ec-Lon) did not efficiently degrade proteins bearing the mf-ssrA tag. [11] 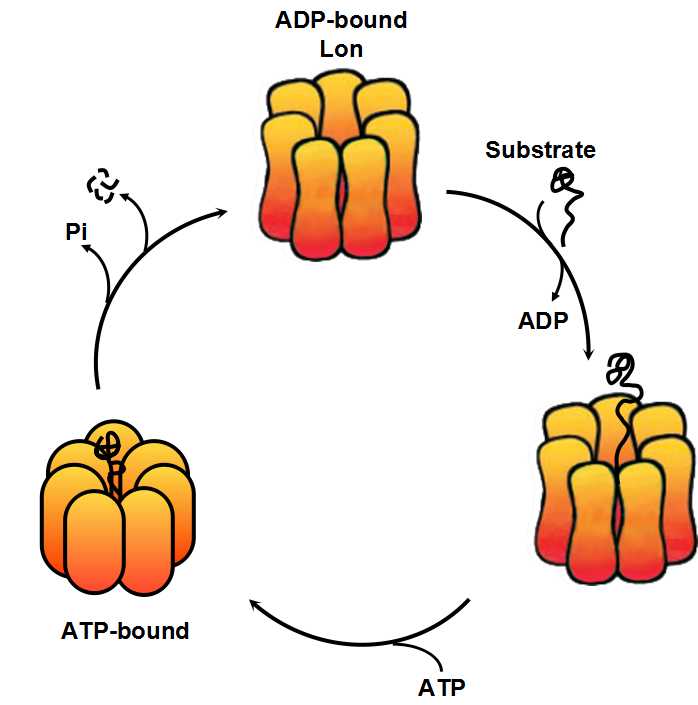 Figure 3. The degradation mechanism of Mf-lon.