This year, we publicize an assistant Handbook in Chinese version striving to help general schools get familiar with the iGEM competition and encourage them to take part in. Particularly, our handbook focuses on the basic information like long-standing history and medal requirements, as well as the outstanding works done by others. Beside, this book is practical for anyone who wants to know more about iGEM with easy-to-approach pictures and summaries which then gives readers a clear image about this competition. Our Handbook has helped five high schools including SKLBC-GDSYZX, SKLBC-China, Shiyan_SY_China, H4Z-Hangzhou and WLSA_Shanghai as well as several universities. Notably, SKLBC-GDSYZX started their first journey in iGEM this year within our collaboration. They benefit a lot especially from team setup guidance since it is their first time to organize an iGEM team. Questions like how to gather the talents and how to figure out their topic seem important for them. Although other teams are not the first time to participate in, they also learn a lot from our experience. They highly valued our work exhibition sector and paid more attention studying deeply. We believe that our Handbook can prompt their success and we are intended to help even more schools not just in China but all over the world.

Check the wiki of SKLBC-GDSYZX to view our collaboration:

Here are some photos and feedbacks from different high schools: 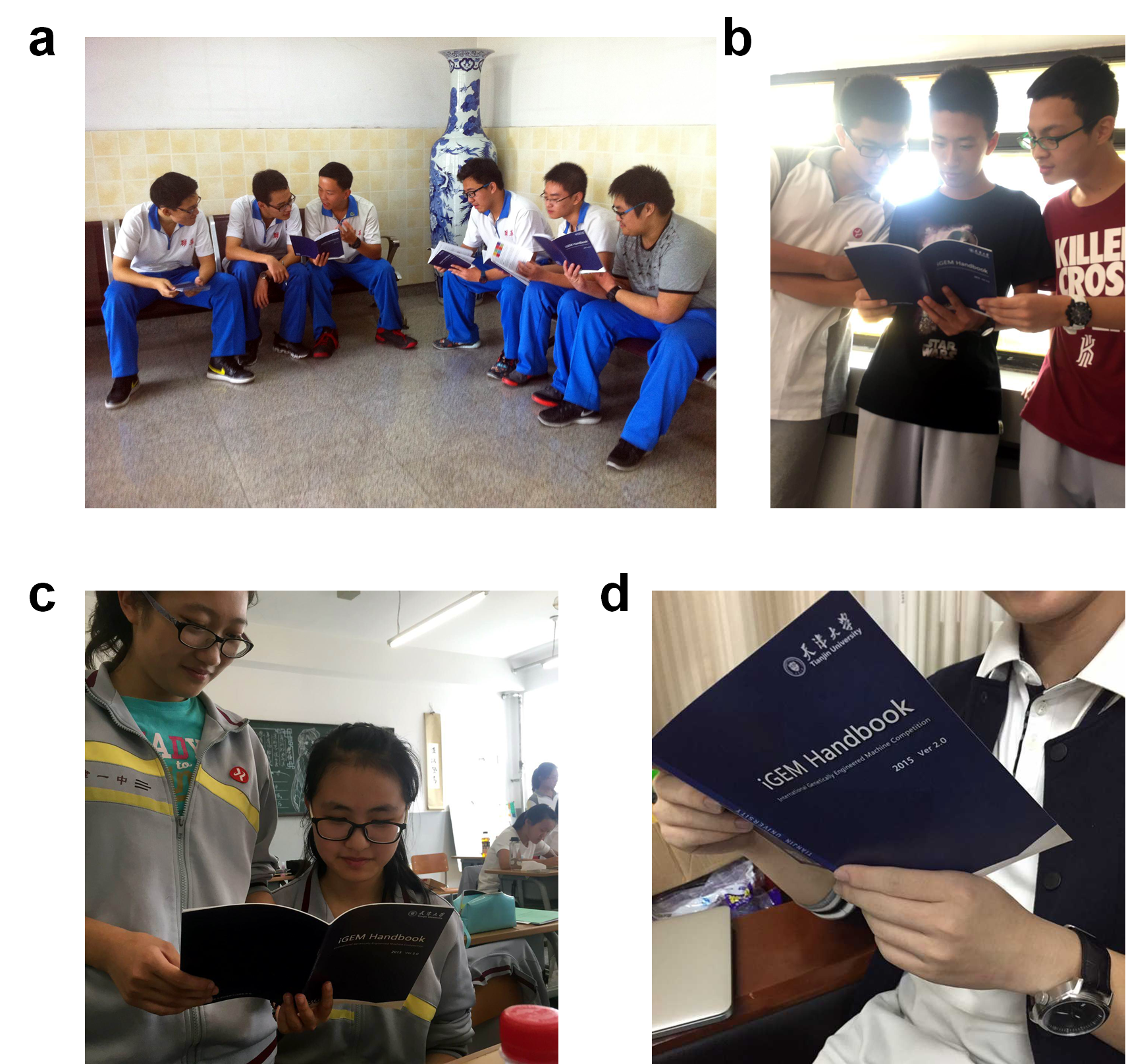 In 2015’s iGEM competition, we collaborate with LZU-China from Lanzhou University. In August 2015, LZU-China visited Tianjin University and we held a tiny meet-up. We presented the project station and provided many valuable advises for each other.

To prove their part BBa_K1755024 can work normally, we tested their part in our own lab under our MFC system which had similar culture environment. The BL21 with K1755024 was cultured added with NaF and the production of riboflavin was measured. 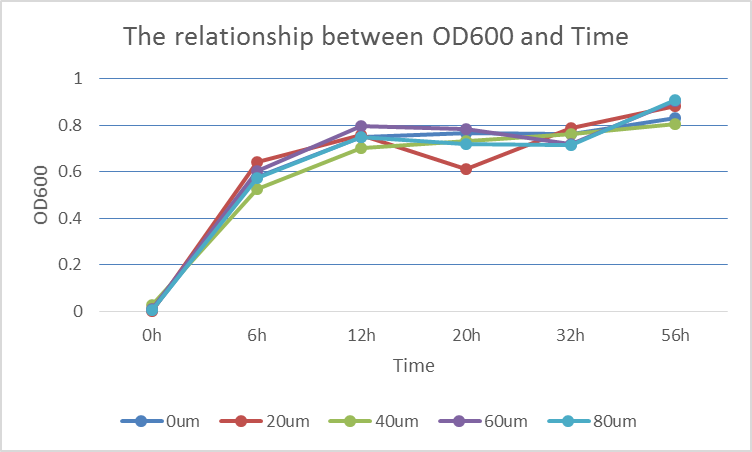 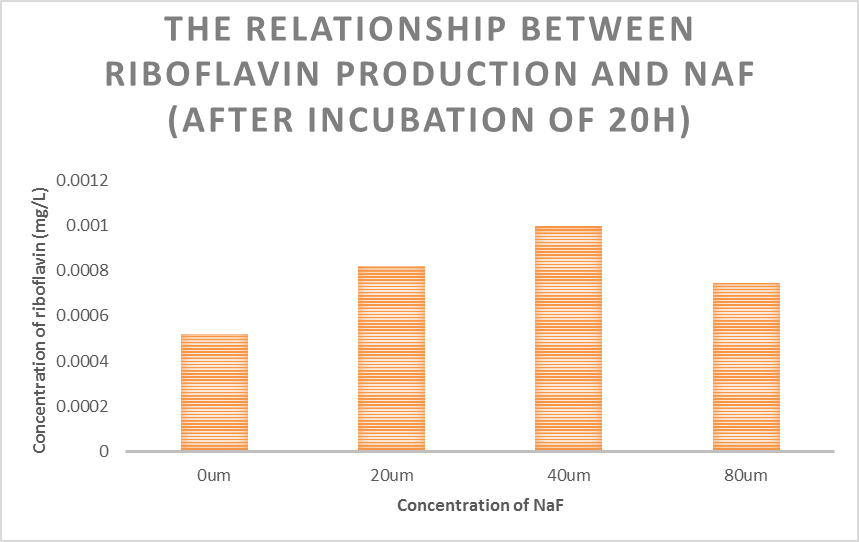 We can see from the figure that though the background expression is relatively high, the concentration of riboflavin shows a good linear relationship with that of NaF when NaF ranges from 0 to 40 μm. However, 80 μm condition, through our speculation, may inhibit the expression of riboflavin.

Apart from the F- part, we also helped them characterize the Cu2+ sensing part in our MFC device. 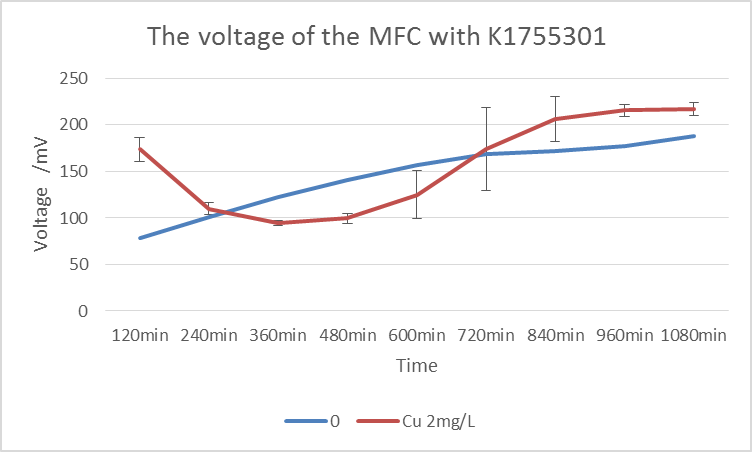 We can see that the E.coli, modified by the part they constructed can sense the concentration of Cu ions in different labs normally. The data shows typically consistent.This also indicates the biological component of LZU-China’s “Micro saHolmes” measurement system has nice accessibility and portability.(Table-1)

Table-1. The voltage of MFC when the concentration of Cu ions was 2mg/L. The data are all the peak values.

BIT-CHINA this year designs an intelligent pH-Controller inside microorganism tailored to earn the ability for pH regulation in industrial fermentation. During our conversation, they have heard that some part of our model is related to pH induction and regulation, which is closely connected with their efforts. Meanwhile, they have also experienced a lot of difficulties when constructing their model. As a collaboration to improve the models on both side, we respond to their request and help them as much as possible.

The basic principles of pH tolerance

1. Under acid conditions, the acid-resisting gene glsA can produce glutaminase which catalyzes Gln to generate NH3 as well as Glu. Subsequently, NH3 is able to neutralize H+ inside the cell resulted in pH ascending. 2. When intracellular pH goes up, the alkali-resisting genes NhaA and NhaB can generate Na+/H+ pump which transfers Na+ to the outside in exchange for H+ from the outside. Thus, H+ is able to neutralize OH- inside the cell leading to pH drop. Next, we will demonstrate our construction via taking the pH regulation module as an example. 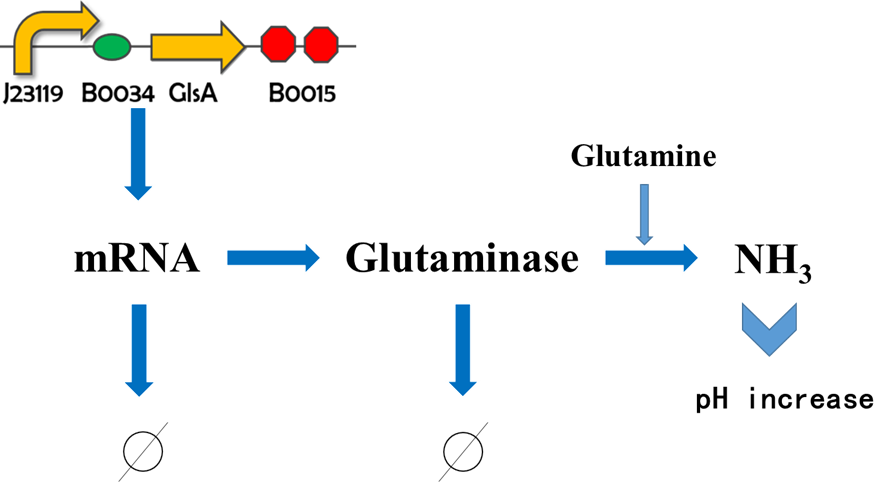 We establish the following equations based on the gene circle above:

As a step forward, we established the following ordinary differential equations on the basis of Law of Conservation of Mass and Michaelis-Menten equation:

Supposing that the original pH in the external environment is 4, we can get the picture of intracellular H+ concentration change (as shown in picture 1). 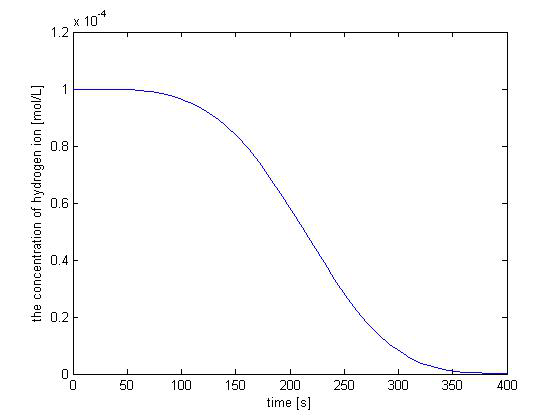 the figure indicates that the intracellular acid concentration tends to be stable, which clarifies that the acid controller can make microorganism more tolerant in the low pH conditions. Besides, the principles and equations used in alkali controller modeling is similar to those used in acid controller.