In order to verify our ldhE part and pflB knockout strategy have works well, we get following results.

In anaerobic environment, lactate production of MG1655, MG1655ΔpflB and MG1655ΔpflB+ldhE has large differences between each other. Notably, knocking out of pflB together with ldhE insertion will increase lactate generation up to ~3 g/L and the amount produced by MG1655ΔpflB is smaller than MG1655ΔpflB+ldhE.

So, knocking out of pflB can dramatically improve the lactate production. Besides, ldhE also plays an important role in lactate increase. Engineered lactate producing strain (MG1655ΔpflB+ldhE) has a greater utilization of carbon sources and a higher yield of lactate with M9 medium under the same concentrations of glucose.

To prove the EC10 and EC10* work as expected, we conduct several experiments and the results are as follows. 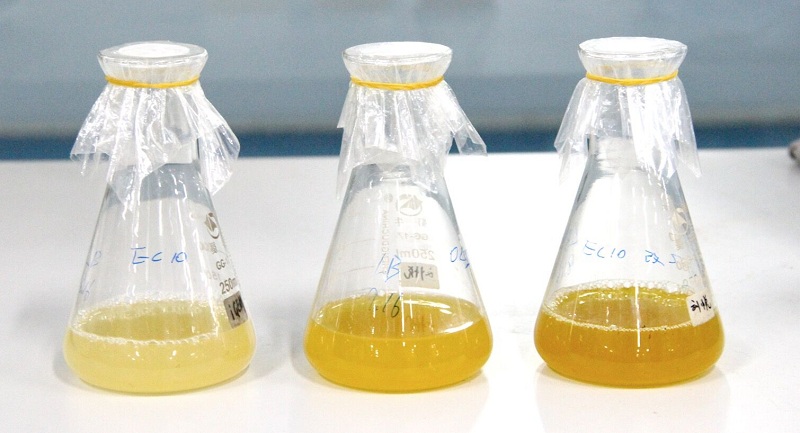 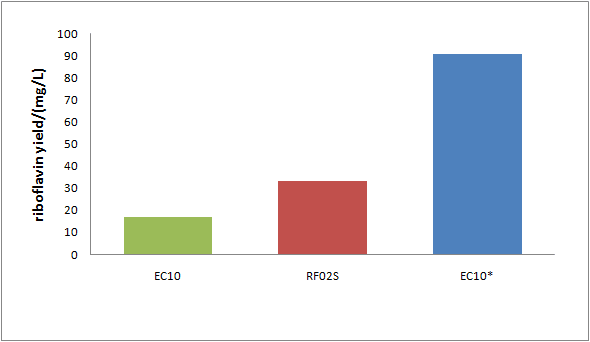 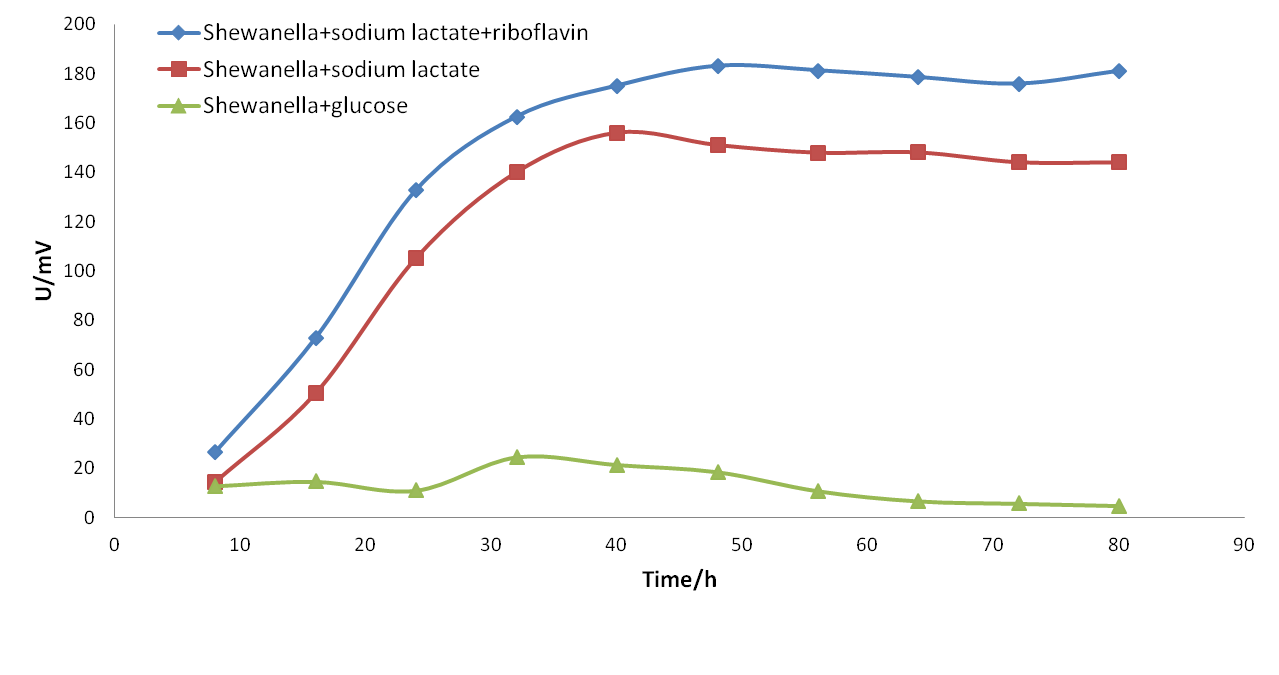 From the diagram above, we demonstrate that：

1. Shewanella cannot use glucose as a mere carbon substrate to generate power and so the potential keeps no more than 50 mV.

2. Shewanella can produce the maximal potential up to 150mV with supplement of sodium lactate.

3. Shewanella can produce even higher potential when we take sodium lactate as the carbon source and add little riboflavin into the system.

Conclusion: According to our experiment, our system is feasible in principle. Lactate can serve as the entry point in material flow and riboflavin as the major factor in energy and information flow, which lays a foundation in the later experiment design. We can use fermentation bacteria to provide carbon sources and electron shuttles, which subsequently, will increase the power generation capability in the co-culture system. 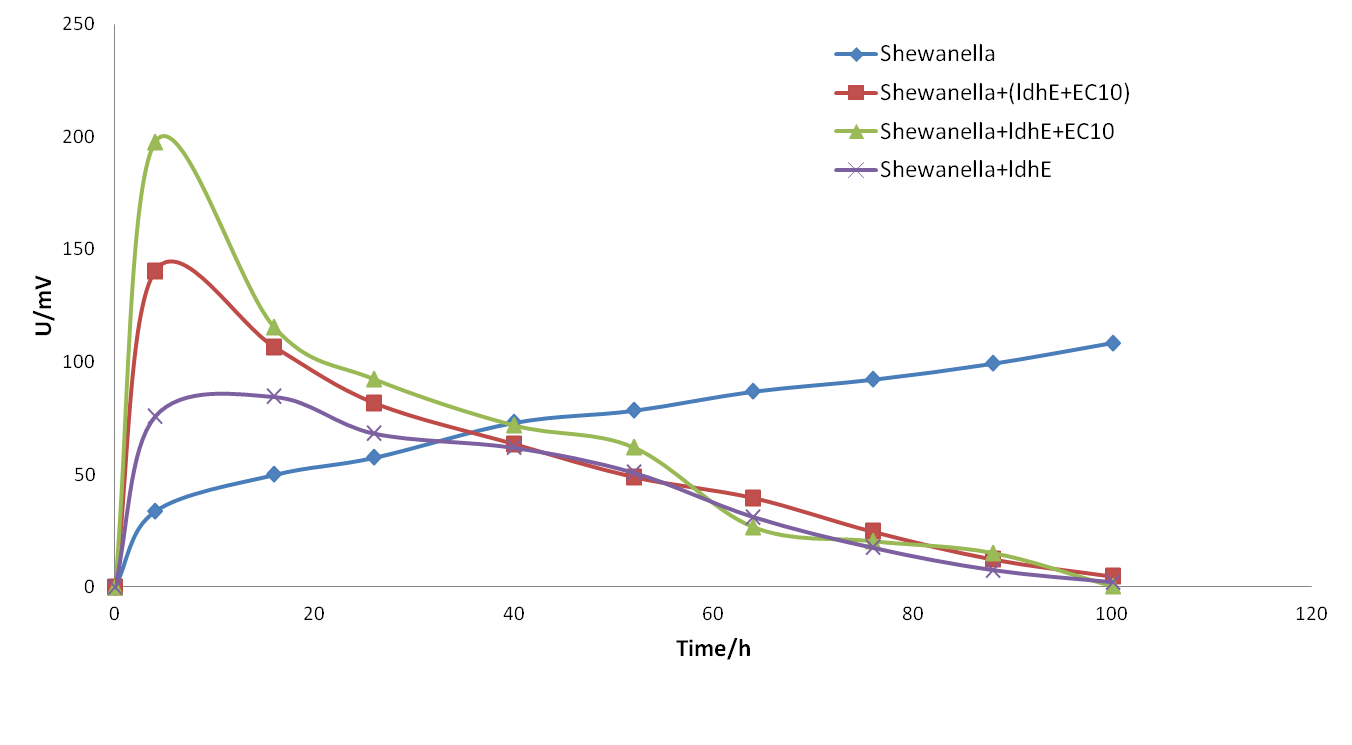 Figure 6. The electrical output of co-culture MFCs with preliminary division of labor

Description： The results show that dividing material, energy and information flow into separated fermentation bacteria is much better than combining the two tasks into one kind of bacteria. We suppose that the production of riboflavins and lactate cannot be consistent in single strain because lactate is the primary metabolites and riboflavin is the secondary.

However, the electricity output cannot sustain for long and decrease promptly (as shown in figure 5).Based on the measurement, samples from anode reaches an excessively low pH (lower than 6.2) which might not meet the survival requirement of Shewanella.

To optimize the system, we try to control the rate of lactate production and adjust the proportion of fermentation bacteria. 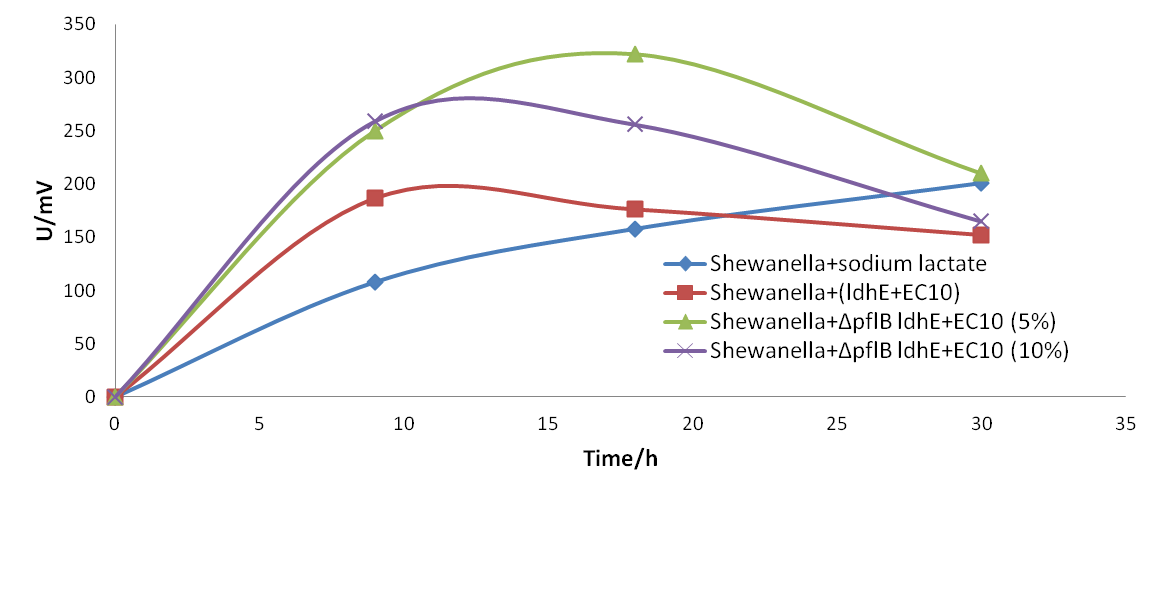 Figure 7. The electrical output of co-culture MFCs with optimized division of labor and bacteria proportion.

The maximal potential increased up to 322 mV and could maintain for 30 hours in the optimized three-strain system. (consist of Shewanella and two kinds of E. coli) 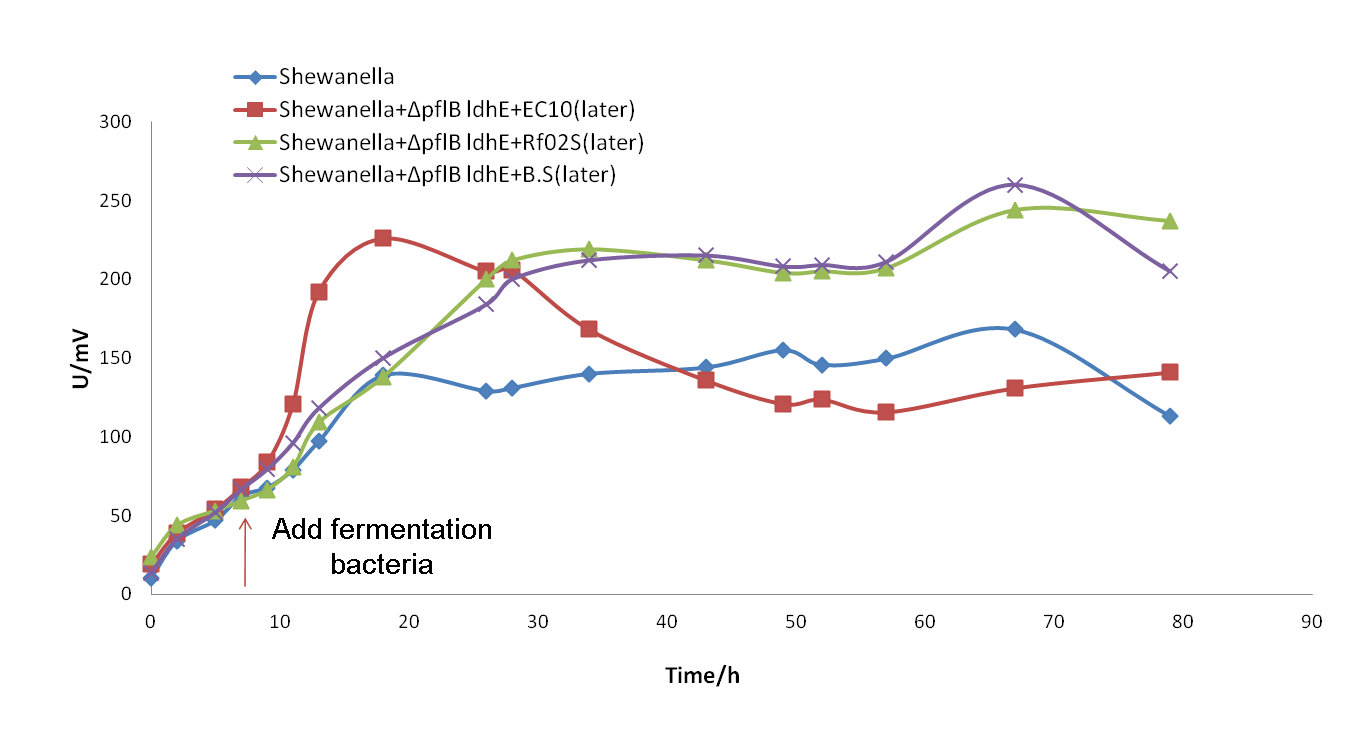 Figure 8. The electrical output of co-culture system with fermentation bacteria added 8h later into the system 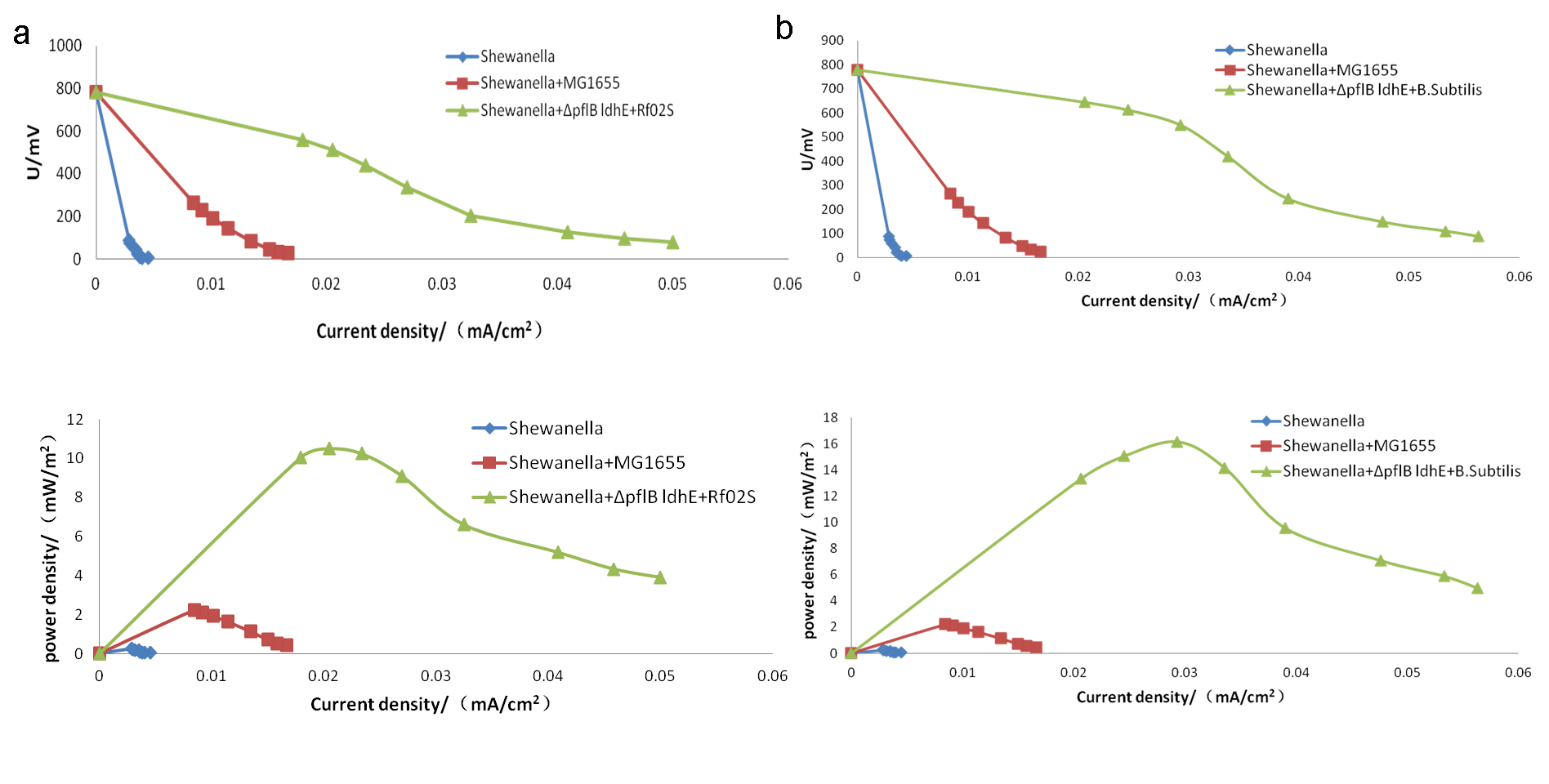 It is obvious that the power output in three-strain MFC systems with a more complete division of labor are far greater than single-strain and two-strian MFCs.

It significantly improves the commensalism relations between electricigens and fermentation bacteria. 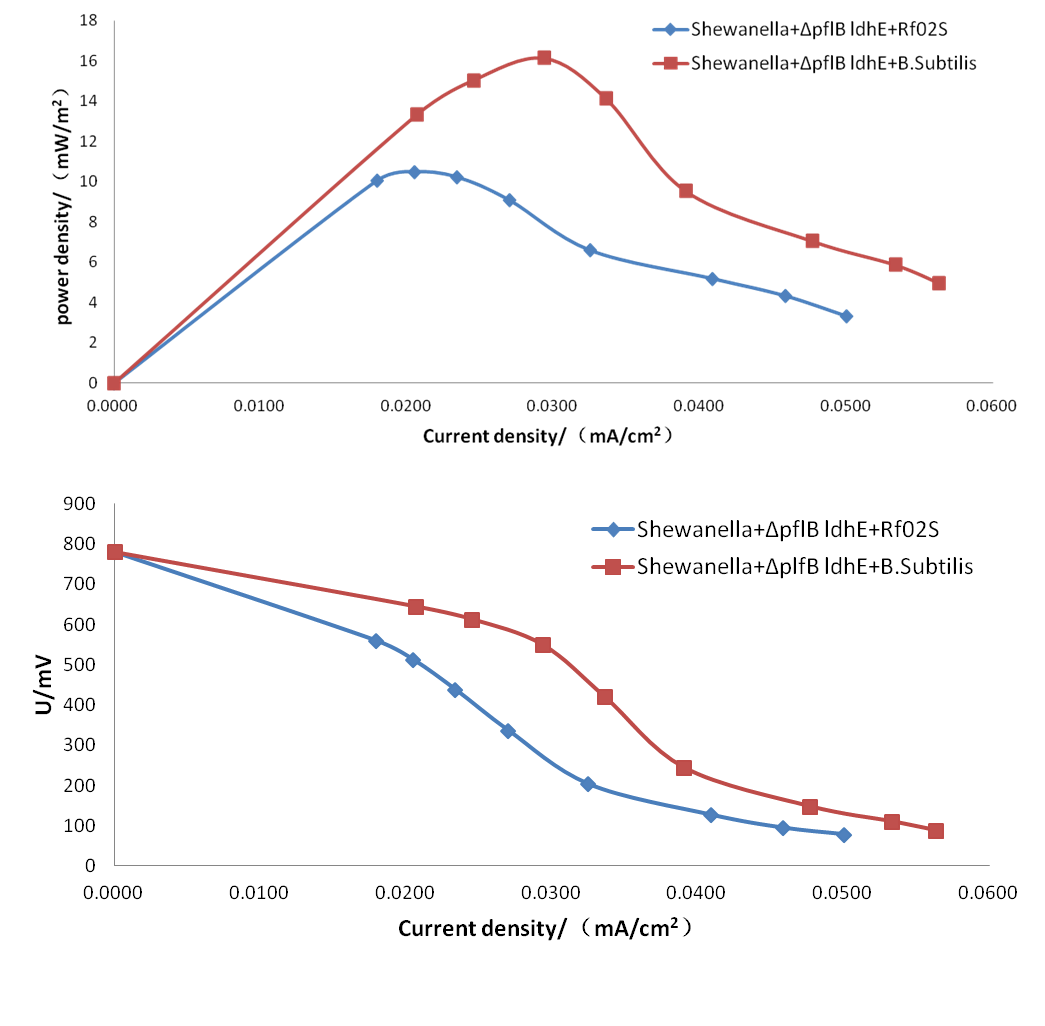