① Simplifications and assumptions for metabolic pathway and gene insertion:supposing that we have adequate glucose and constant pyruvate, the latter used to product lactate can be replenished by glucose in E.coli. Naturally, E.coli can itself produce lactate dehydrogenase (Ldh) through LdhA gene expression. Later, we attempt to introduce plasmids with Ldh gene, which can produce the extra Ldh as an approach to generate even more lactate. However, the excessive Ldh, to a certain degree, will also inhibit Ldh gene expression.

So, we need to modify the existing Michaelis-Menten equation:

The above equation reflects a general enzyme catalytic reaction process. With the help of steady state approximation, the equation can transform from first-order reaction to zero-order reaction. Because of the constant substrate concentration as we assumed, the variable in the equation is the variation of ldh amount, which means that the independent variable in the Michaelis-Menten equation turns into the enzyme amount. (variable change from [S] into [E])

Firstly, we establish the equation of ldh amount changing with time. The following equations represent the ldh production rate in E.coli without the plasmid insertion and with the plasmid introduction, respectively.

Next, we construct the lactate production rate equation:

Finally, the lactate transmembrane transfer equations has been figured out. It shows that lactate will be transferred to the outside at the time it produced. We represent the intra membrane with c and extra membrane with e.

When lactate production is combined with its transfer, we can get the following equation: 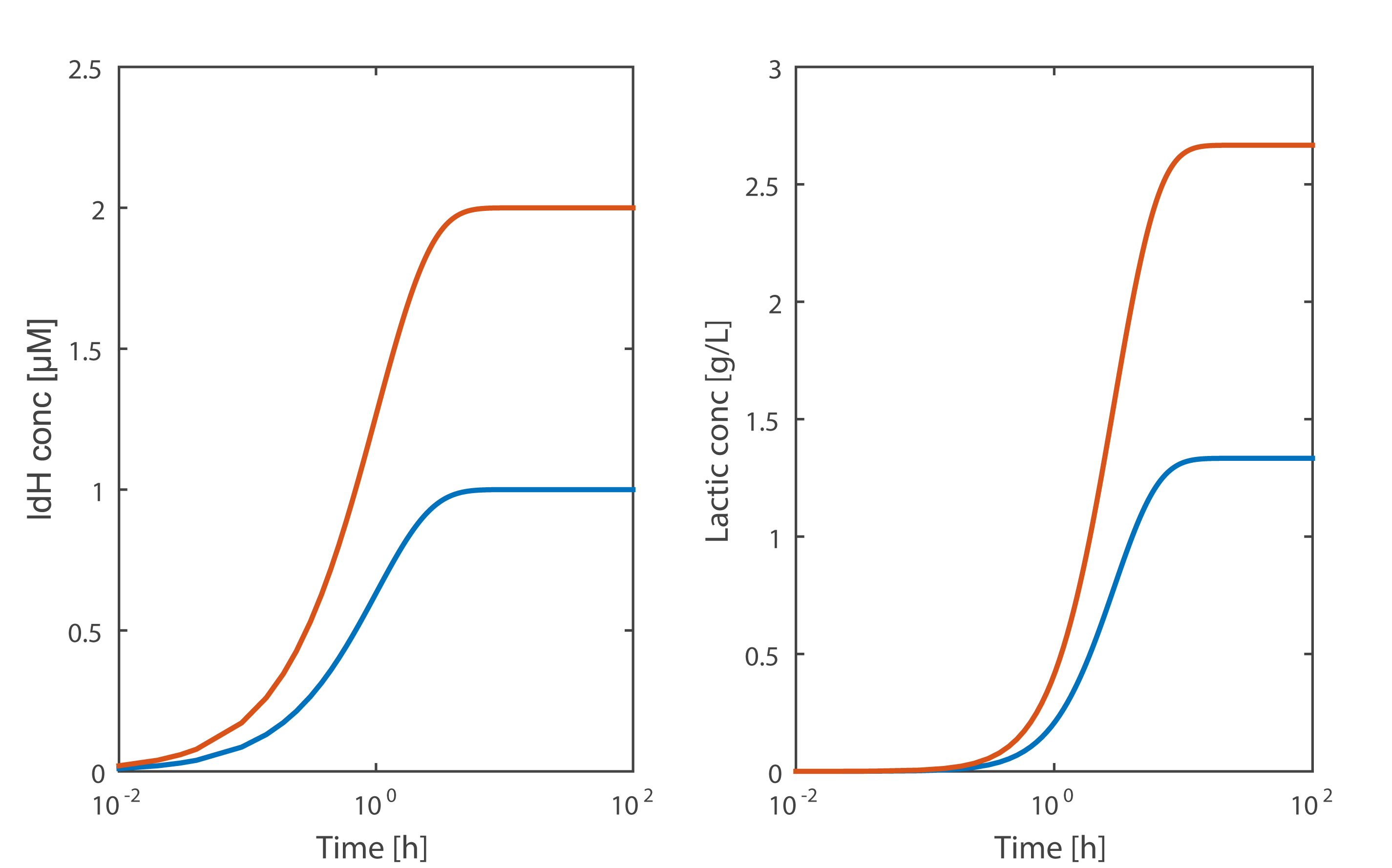 Figure 1. The relations between amount of ldh and lactate with time passed, respectively.

From the simulation results, we can clearly see that the E. coli with Ldh have a significantly increased in number and lactic acid production of lactate dehydrogenase, which is consist with our experimental results.

2 Models for monocultures of Shewanella in MFC

At the very beginning, we construct a fermentation kinetic model based on the Monod Equation to draw a picture of carbon balance between biomass increase and base consumption during S.oneidensis MR-1 growth. Before generation our modeling, we simplify the center process of carbon metabolism in Shewanella via making assumptions as follows:

③ Although both acetate and lactate can be used as carbon sources for Shewanella, acetate can restrain its growth. On the one hand, acetate will drop the acidity inside the cell, which, a step forward, can affect the activity of enzyme in vivo resulted in uncompetitive inhibition to cell growth. On the other hand, acetate can itself limit the growth by uncompetitive inhibition. In particular, the process of acetate metabolism and lactate metabolism are competing for acetyl coenzyme, which reduces the lactate utilization and influences cell growth. (Tang & Meadows, 2006)

According to the four assumptions above along with acetate uncompetitive inhibition and competitive inhibition, we decide to use multi-substrates Monod equation(Blanch & Clark, 1997) with two kinds of inhibition to demonstrate the relations between restrictive substrates and biomass increase rate. Considering that the accumulation of NADH will remarkably affect metabolic process under anaerobic conditions, we add a product factor in the Monod equation reflecting metabolites inhibition function. μ and μ refers to the lactate and acetate biomass specific rate, respectively. We quantify the relations between specific rate of lactate/acetate and restrictive base concentration as following:

Extracellular Electron Transfer (EET) process can deliver the electrons between electrode and cell membrane with mediating functions of redox active molecules including FMN and riboflavin. It can be subdivided into the oxidation of reduced mediator and reduction of oxidized mediator in electrode.

We establish a model kinetics of electrode process on the basis of Bulter-Volmer equation to illustrate the oxidation of reduced mediator in electrode. Firstly, we make several assumptions just like the following tips:

① Although both of FMN and riboflavin can serve as mediator in electrode redox, we only take riboflavin into consideration for simplification in the model.

③ Oxidation of Sq in electrode is the reversible first order reaction. The net rate for this kind of reaction is made up by the difference between oxidized rate of Sq and reduced rate of riboflavin in electrode.

Accordingly, current density in anode can be calculated by Bulter-Vlomer equation:

Reduction and Oxidation reaction rate constant can be calculated by Arrhenius equation:

As for the reduction of oxidized mediator in outer membrane for Shewanella, we establish a kinetics of enzyme catalyzed reaction on the basis of Michaelis-Menten equation, accordingly.

① Similarly, we also consider the single-electron transfer as the only pathway in vivo.

Based on the assumptions above, we believe the respiration of OM riboflavin has something to do with its concentration and NADH production rate. According to the kinetics of enzyme catalyzed reaction, we use multi-substrates Michaelis-Menten equation to determine the whole process: 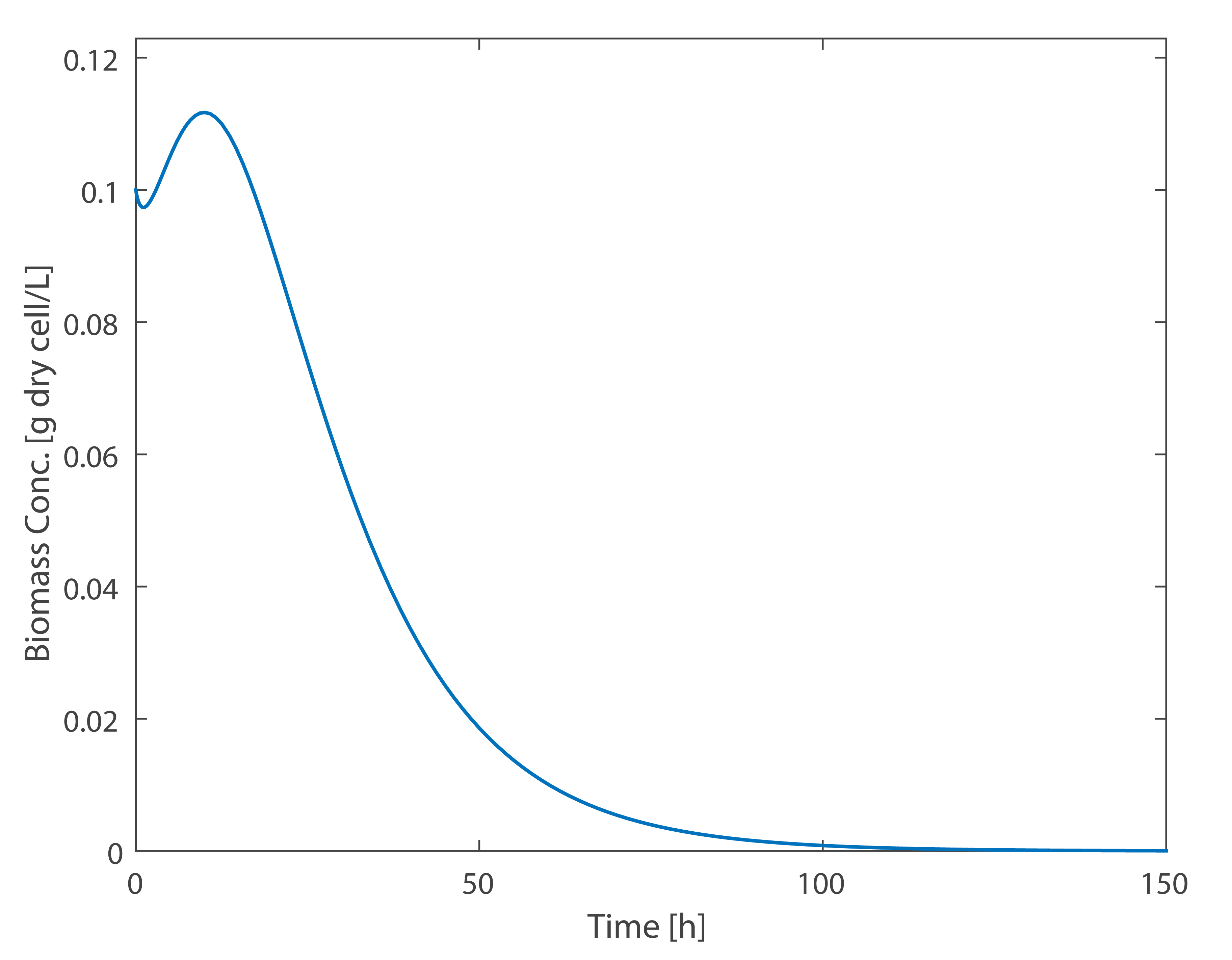 Figure 2. The growth curve of S.oneidensis in MFC. 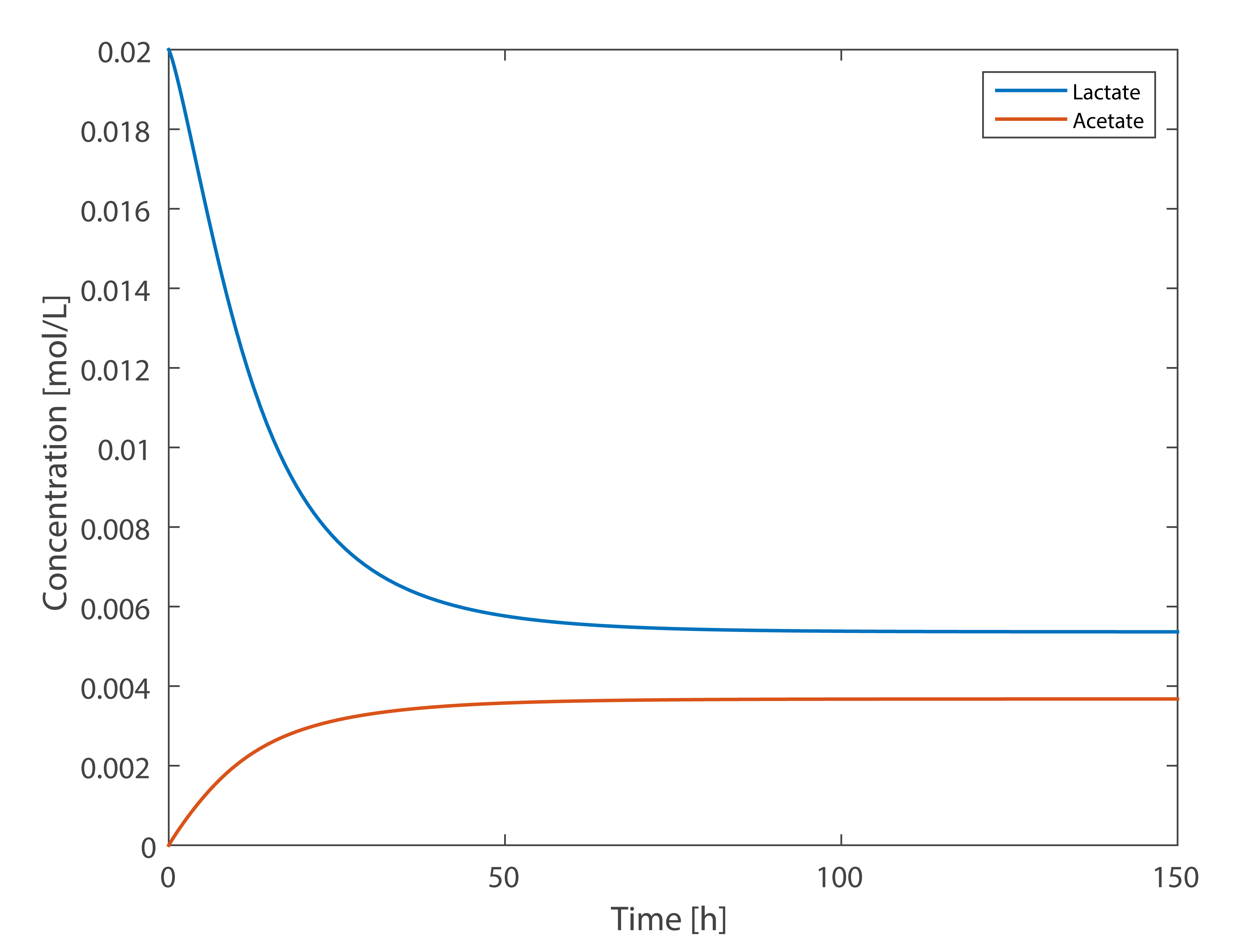 Figure 3. The conc. of lactate and acetate varies with time. 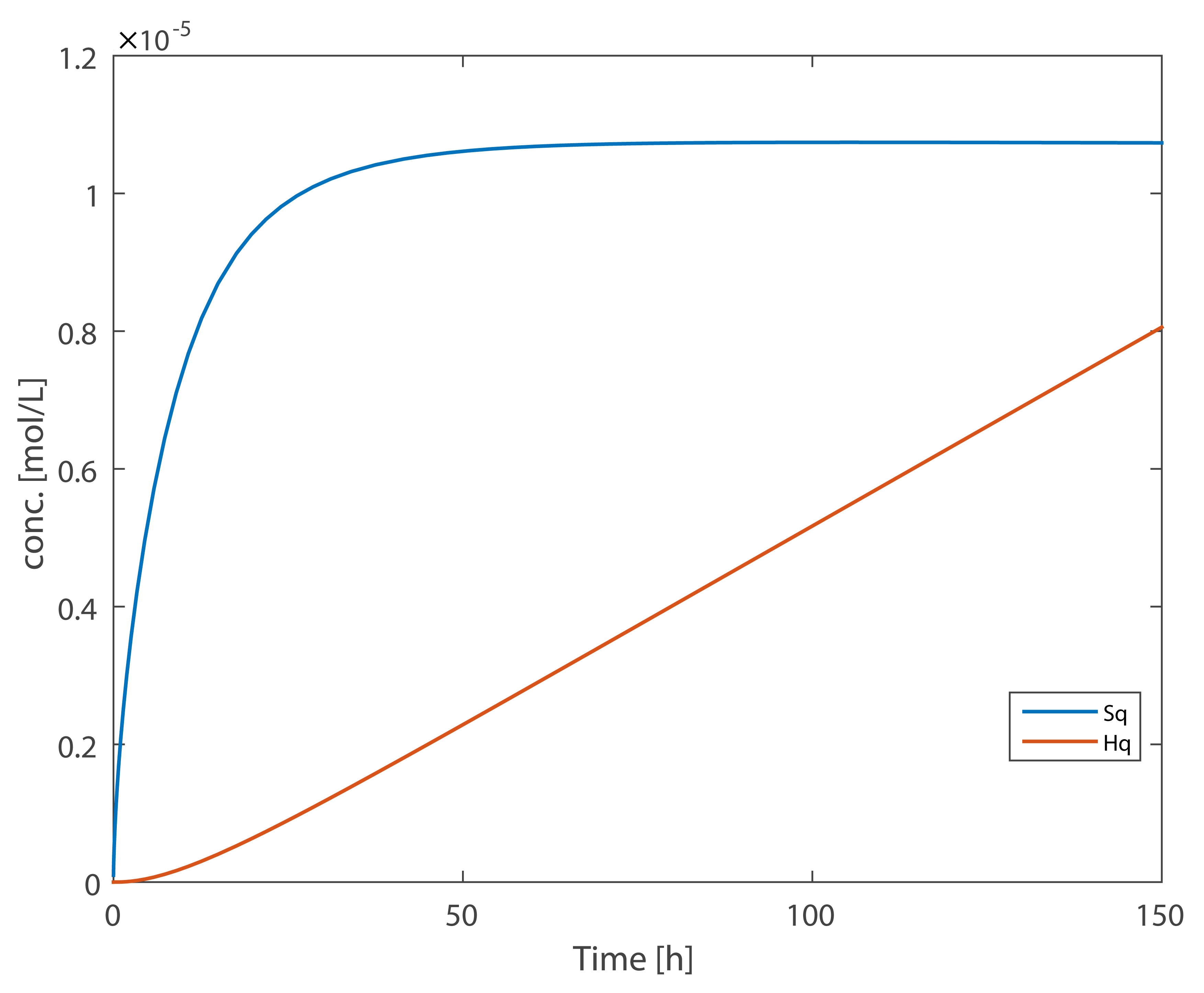 Figure 4. The conc. of Sq and Hq varies with time. 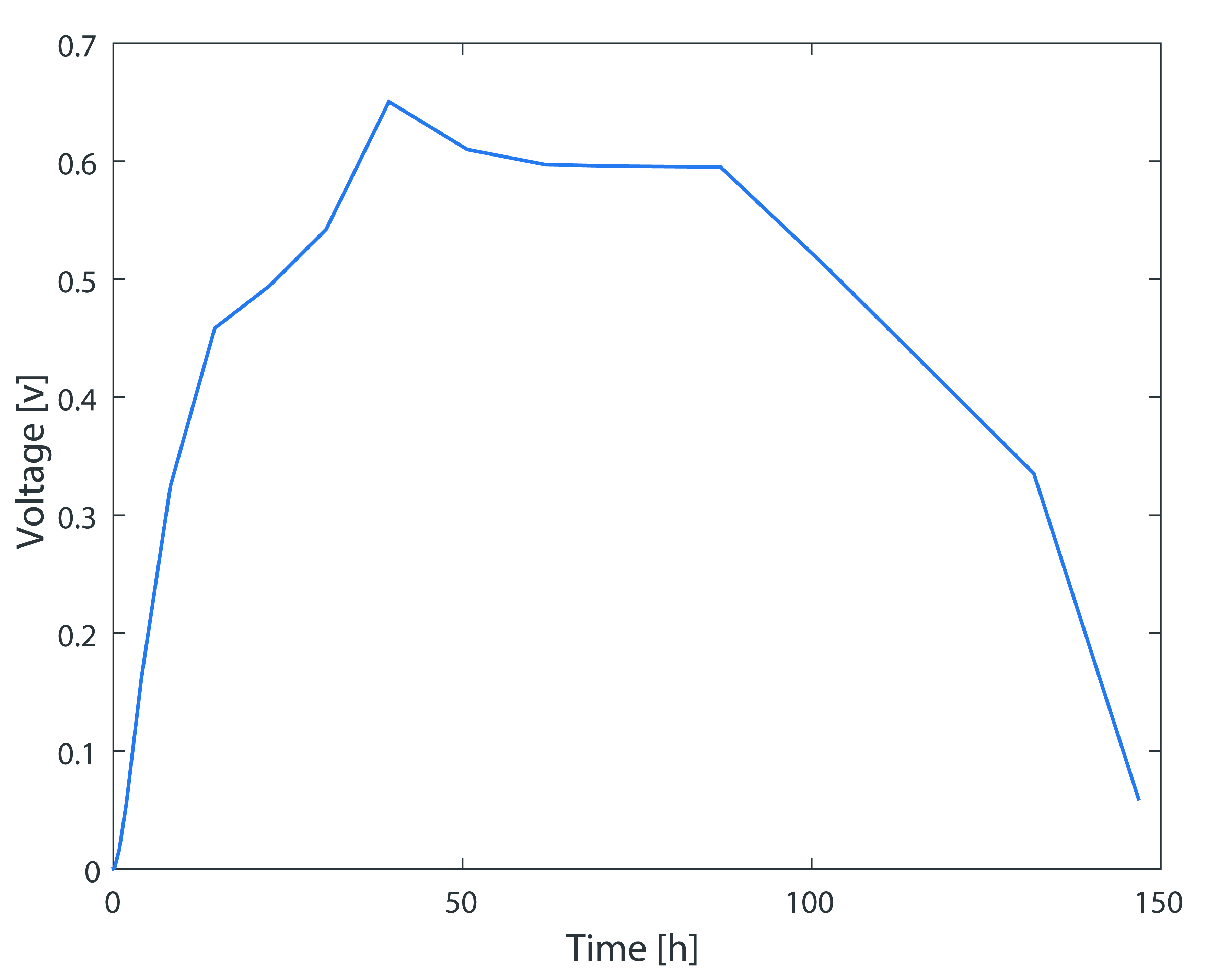 Figure 5. The Voltage varies with time.

As can be seen from the simulation results, when the initial inoculation amount Shewanella is 0.1 g/L, it's growth time in anaerobic MFC is approximately 10 hours. The output voltage of the battery is gradually stabilizing after 20 hours, and the voltage drops after 70 hours due to the mass death of Shewanella.Although specific values are different, the simulation results are consistent with the experimental results in the trends of voltage.

In order to figure out the kinetics feature of growth, substrate consumption and accumulation of metabolite in lactate producing E.coli, we construct kinetics model of fermentation process based on carbon balance. First of all, the fermentation process of lactate in E.coli under anaerobic conditions has been simplified and we make several assumptions as following:

① Except for carbon sources which serves as restrictive substrates, the growth of E.coli will not be affected by other nutrition in the medium.

② E.coli will use carbon sources to maintain its survival, division and proliferation while the accumulation of metabolites is also counted in.

③ The growth model of E.coli is equilibrium increase rather than structural increase, which means the ascending rate of biomass in E.coli increases as the same as the rate for cell weight accumulation.

④ We take lactate as the only one metabolites for accumulation and lactate increase is positively related to its growth rate. Besides, overmuch lactate will inhibit the growth of E.coli.

We further construct the carbon equilibrium calculations for anaerobic lactate fermentation in batches. Therefore, we figure out the following differential equations:

Owing to the assumption of equilibrium increase in E.coli, the relations between specific growth rate of biomass and concentration of restrictive substrates can reflect in the Monod equations that we modeled. However, considering that the accumulation of lactate may inhibit bacteria growth, we introduce an extra inhibition factor for general Monod equation. Due to the positive relations between lactate accumulation and cell growth, the production of metabolites also share the same relation with biomass increase. In this way, Qp can be represented by using the function of μE. 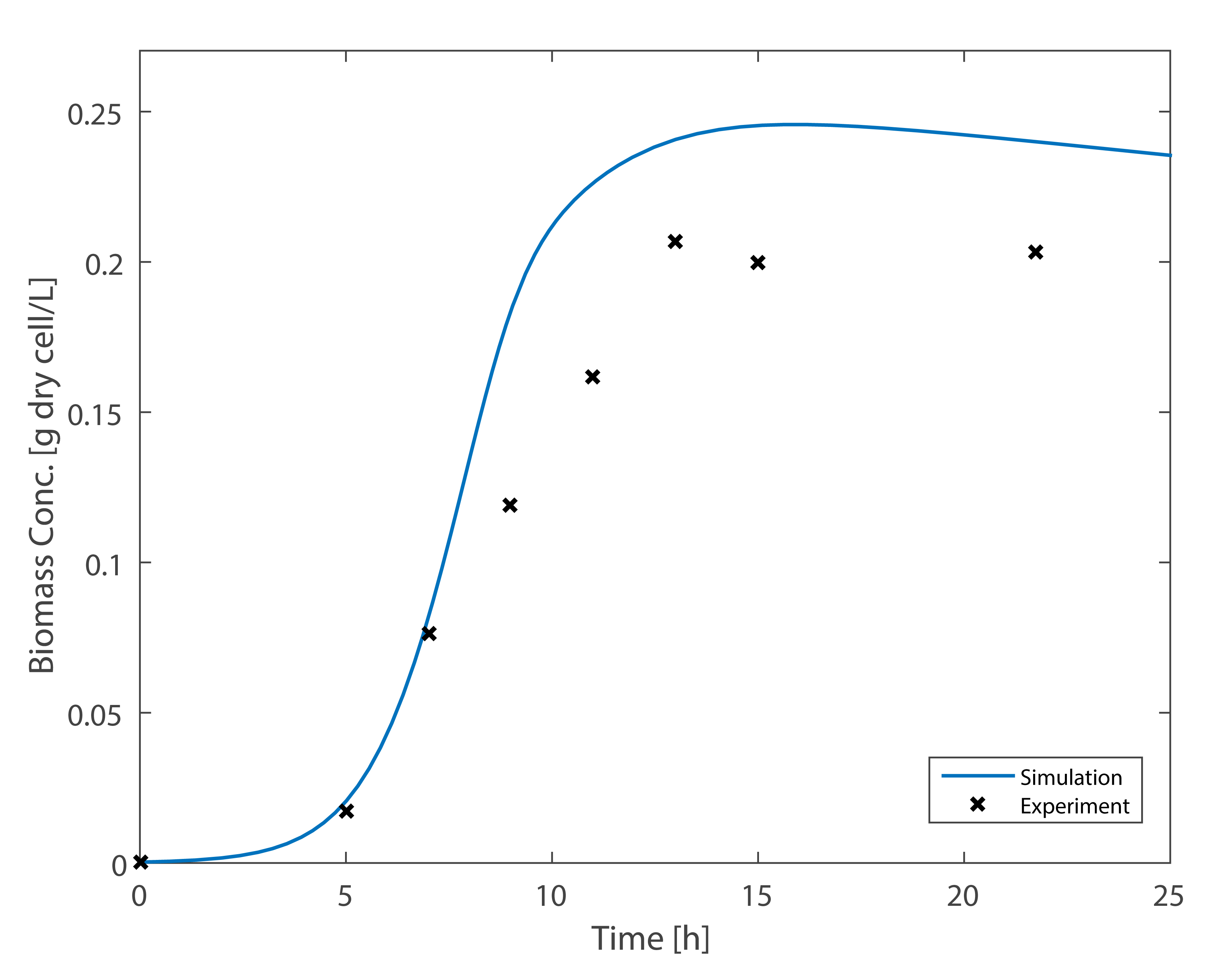 Figure 6. The growth curve of E.coli. 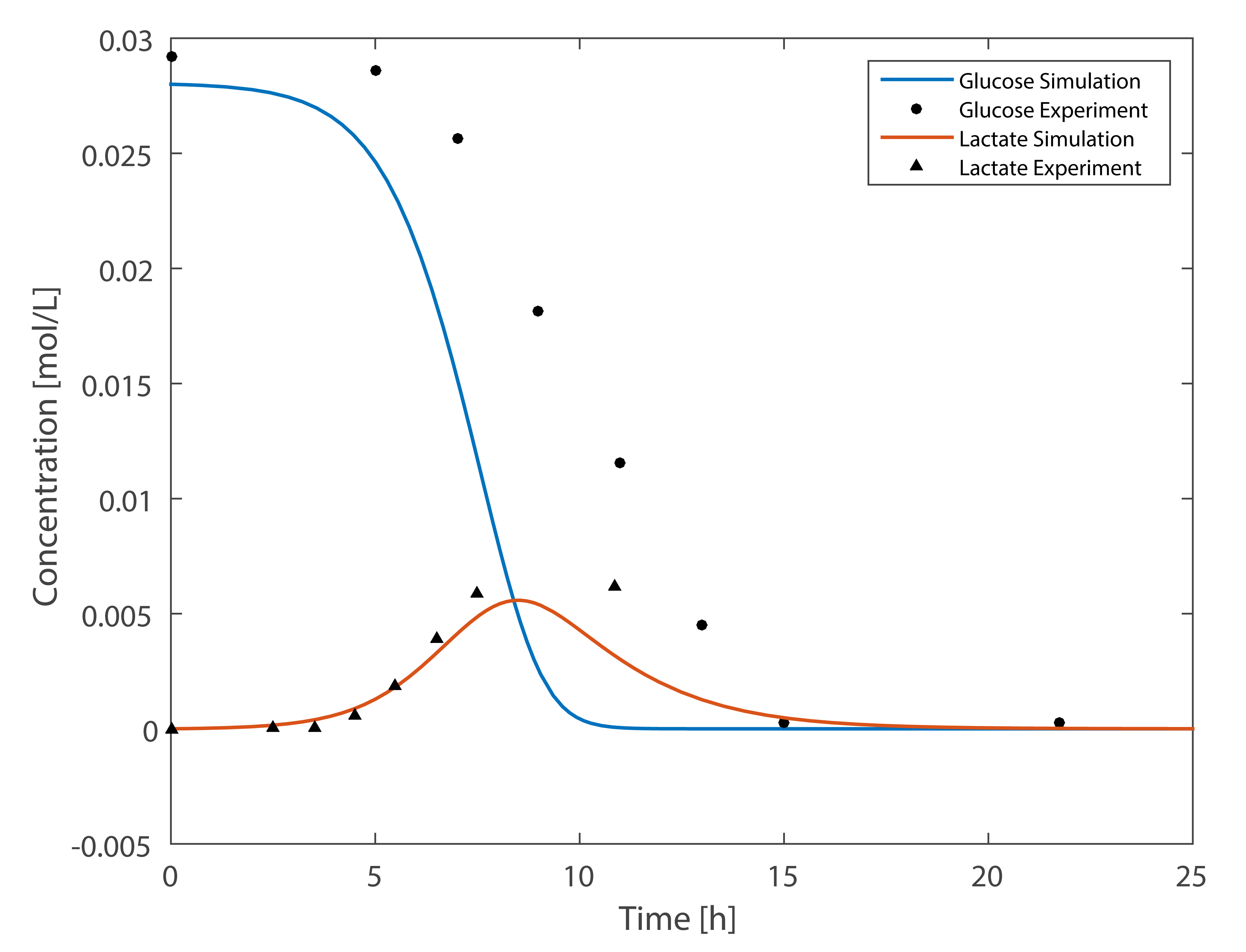 Figure 7. The conc. of lactate and acetate varies with time.

As can be seen from the above figures, experimental results are very close to the simulation results of Ordinary Differential Equations, thus it is considered a successful model. Based on the growth model of E.coli, We constructed the co-culture MFC model.

We constructed the E.coli growth model and the monocultures Shewanella MFC model into a co-culture MFC model. In this model, E. coli is responsible for the decomposition of glucose to lactic acid, to provide a carbon source for the S.onedensis, S.onedensis responsible for lactate decomposition of carbon dioxide, transporting the electrons to the anode by the redox reaction of riboflavin. The simulation Results is shown as follow: 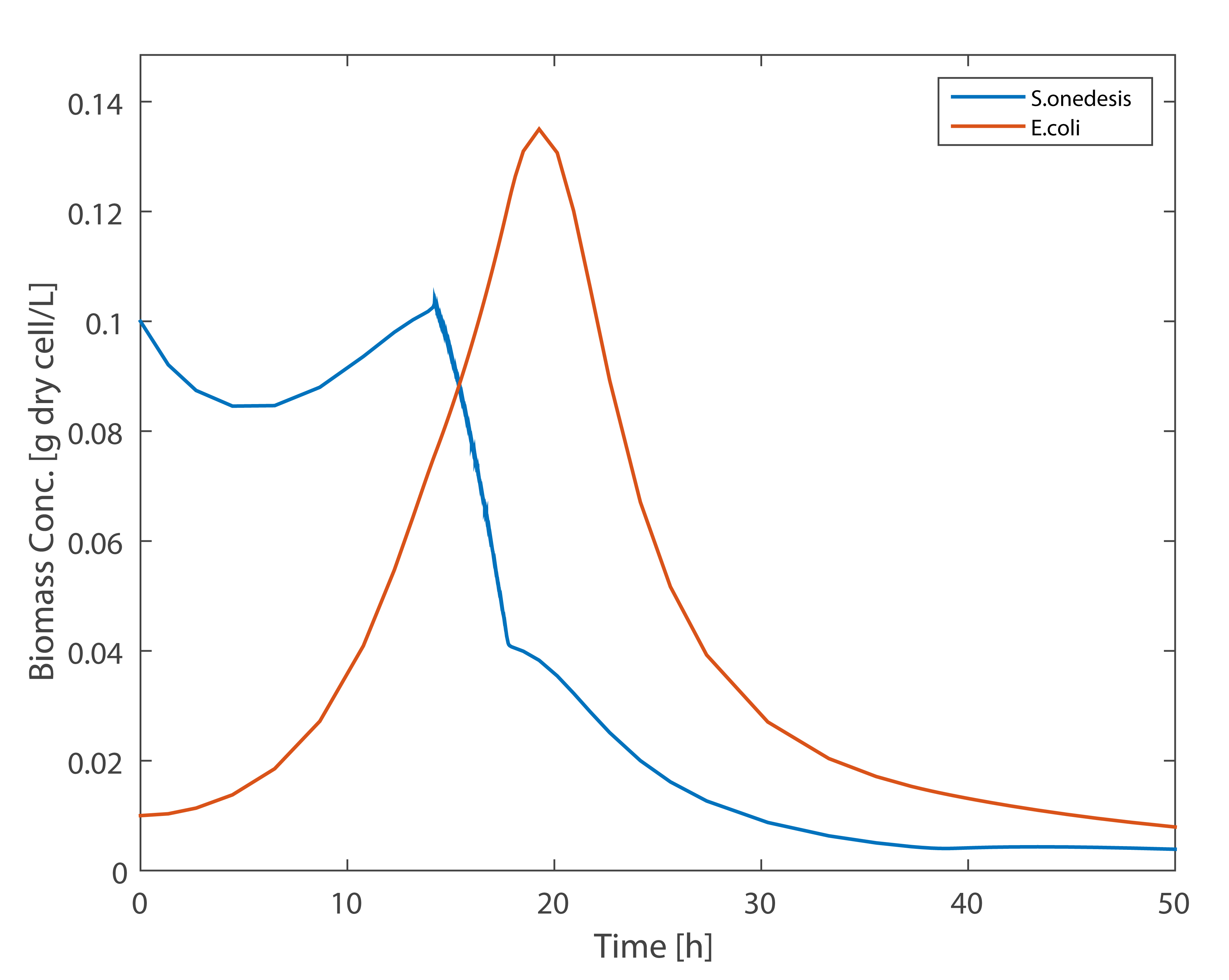 Figure 8. The Biomass of E.coli and S.onedensis in MFC varies with time. 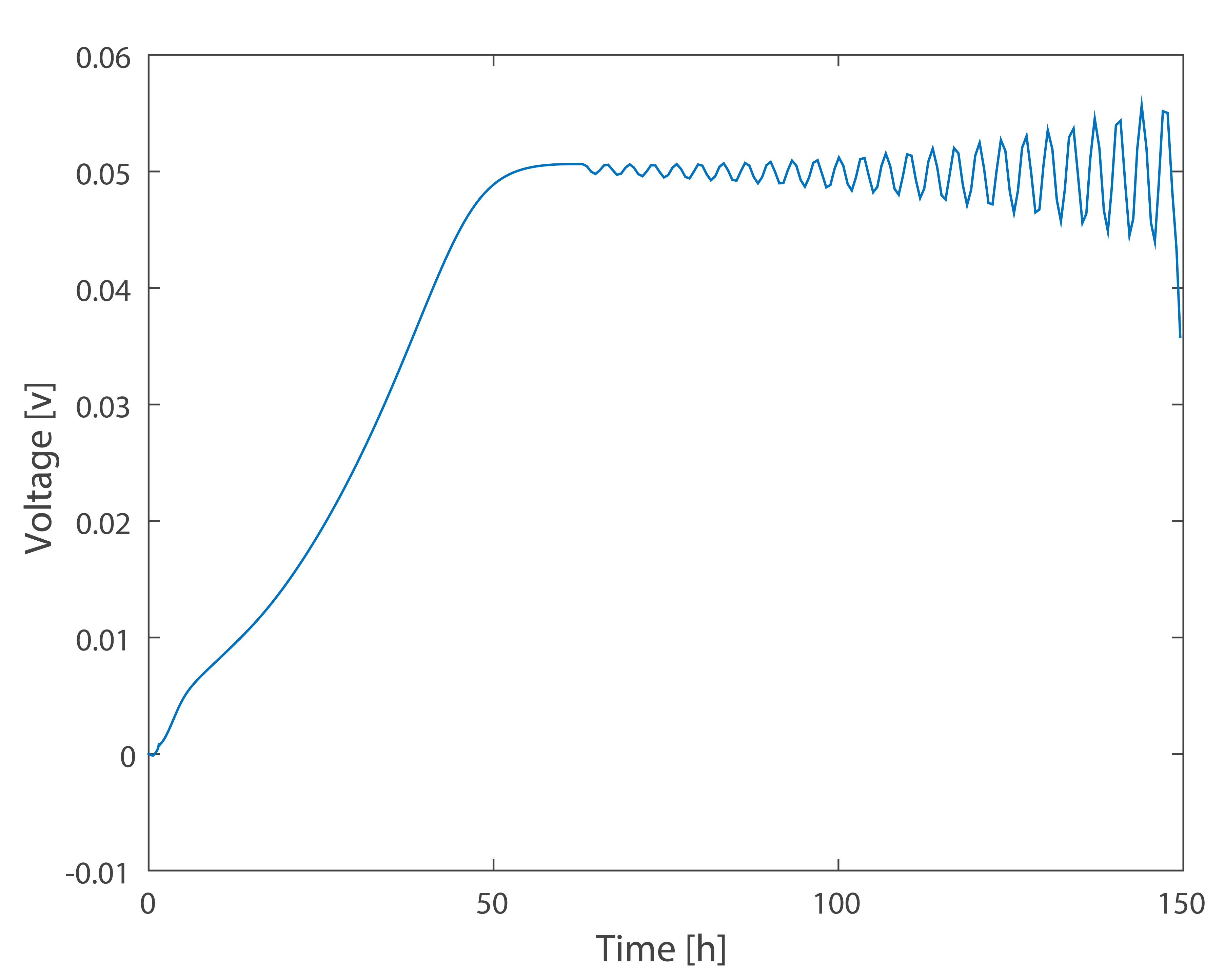 Figure 9. The Voltage varies with time.

As can be seen in figure 8, when the amount of E. coli is small, due to lack of carbon supply S.onedensis begin to die, the situation changed after the rapid growth of E. coli. According to this result, we reached the following conclusions: In order to maintain the activity of Shewanella at the begining, The primary objective is to ensure the lactate production of E. coli. This conclusion has played an important role in the construction of three-bacterium MFC.

P170 is an acid-induced promoter. When rcfB protein is activated by lactic acid, it can bind to P170 and make it sensitive to RNA polymerase. In order to detect and control the concentration of lactic acid, we use P170 and RFP gene, which shows the relationship between lactic acid and fluorescence.

1. When genes transcript and translate downward, the mRNA can bind with ribosome and then start translation subsequently, which can insure a constant amount during the whole process. Therefore, we use steady-state approximation on mRNA and mRNA-rib.

2. Because there is some acid buffer in the cell to transfer the produced lactate out of cell, pH will have a rather small influence on enzyme activity. Therefore, we assume that all enzymes activity are not affected by acid concentration, the rate constant keeps unchanged.

3. Concentration of protein will eventually keep constant, which is because expressed protein can have a negative effect on gene expression in return. Thus we assume that the concentration of rcfB protein is constant, and its magnitude is determined by the strength of the promoter upstream.

Genetic regulation circuit is shown in Figure 10. When rcfB protein is activated by lactic acid, it can bind to P170 and make it sensitive to RNA polymerase.

According to the equation above, we can consolidate that:

Where km1 and km2 are integration parameters.

Next, by using law of mass action and steady state solution, we deduce the equation below.

Where the concentration of mRNA and mRNA-rib satisfies:

In the end, the concentration of RFP and the fluorescence can be written as:

Thus we construct the connection between fluorescence and lactic acid, from which we can know the concentration of lactic acid through the system. 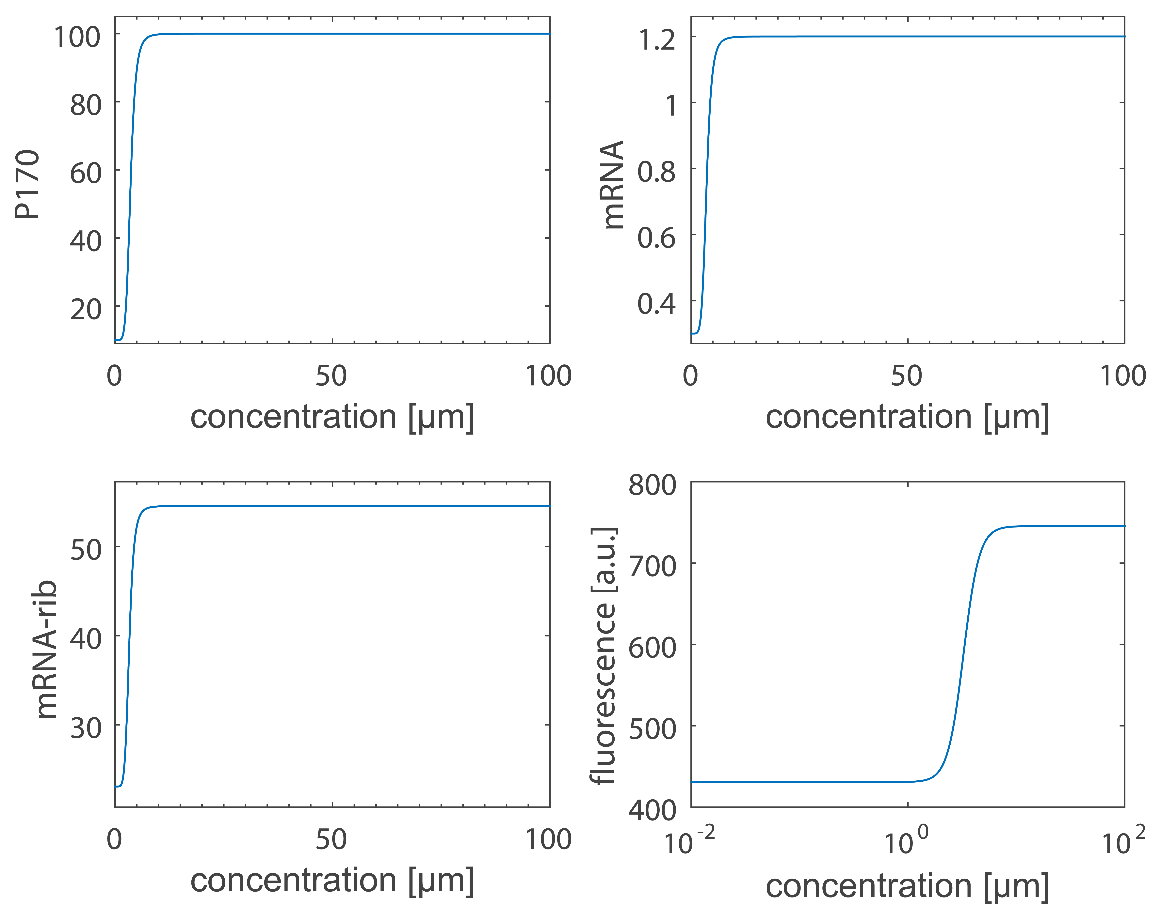 Figure 11. The result shows how P170,mRNA,mRNA-rib,fluorescence change with the lactic acid.

From the equation, we can predict that:

1. the integration parameter km1 can characterize the relative level of leakage.

2. the larger the RcfB concentration is, the quicker the fluorescence will be.

At first we have the constitutive promoter fine-tuning. The BIT-China suggests us using different promoters in our construction. The performance of promoter P170 and rCfB play an important role. We choose to use different constitutive promoter J23103 J23109 J23107 and J23100 for the result (Figure 11). According to the figures, we can get the highest rate of change in fluorescence when we use J23100 promoter which is also the most sensitive one among all the promoter testing. Therefore, we choose J23100 promoter since it is convenient to represent lactate concentration by using fluorescence as the measurement. Particularly, when we have a stronger promoter, the amount of rcfB will be more during stable state. As a result gained from equation, the P170 can be activated in a faster speed and consequently, the changing rate of fluorescence will be greater as well. 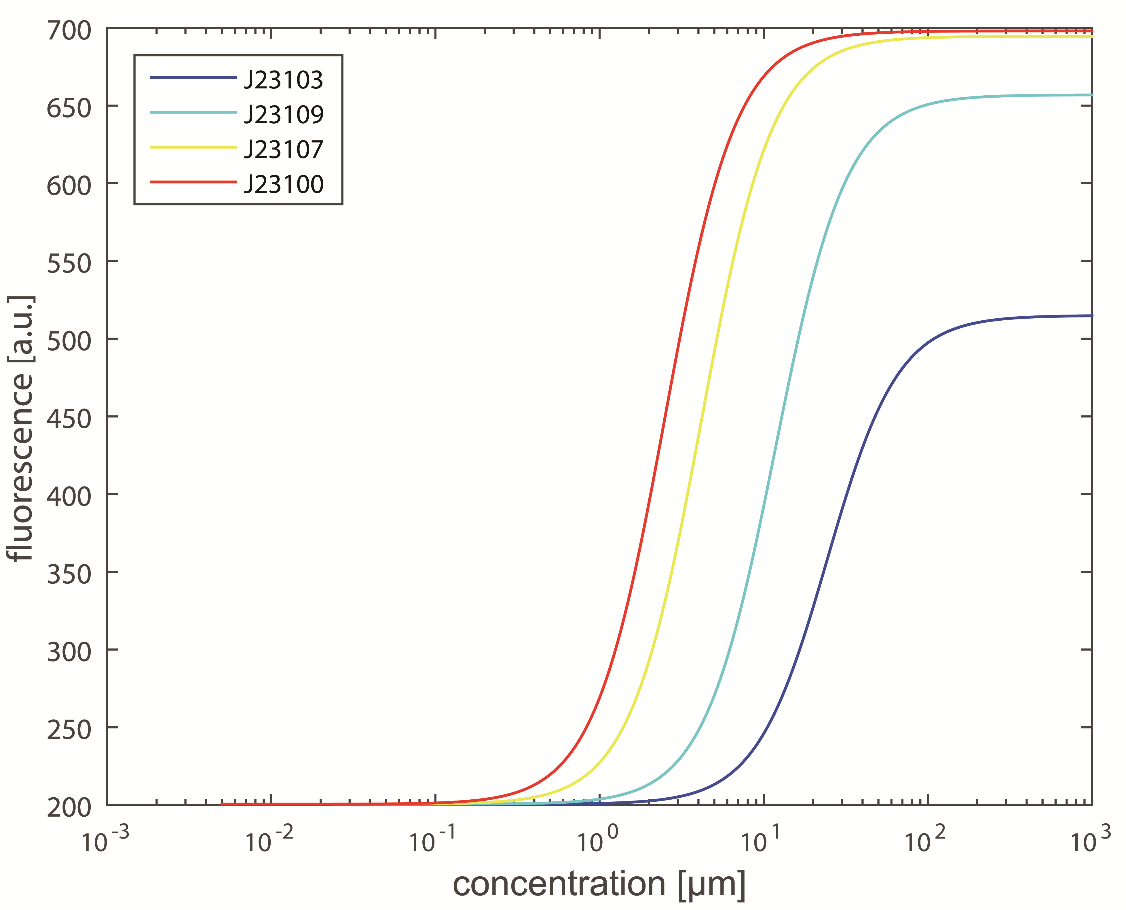 Next, we will explore the effect brought by leakage which means that P170 can activate and lead to fluorescence expression when lactate doesn’t exist. We have predicted that km1 is the index of leakage. km1 is higher, then we get more leakage shown up. Here we make k_m1 equals to 1, 10, 50 respectively and the result is shown in Figure 12. As predicted, the result is well suited to our calculation, because km1 is a constant unrelated to lactate concentration. It has a remarkable influence on the result when lactate amount is relatively small. Then we will analyze the constants related to km1, which mainly contains rate k3 that is directly activated by P170 as well as proportion , which can both affect leakage. Our target is reducing the leakage expression, thus, we need to lower those constants as much as possible. 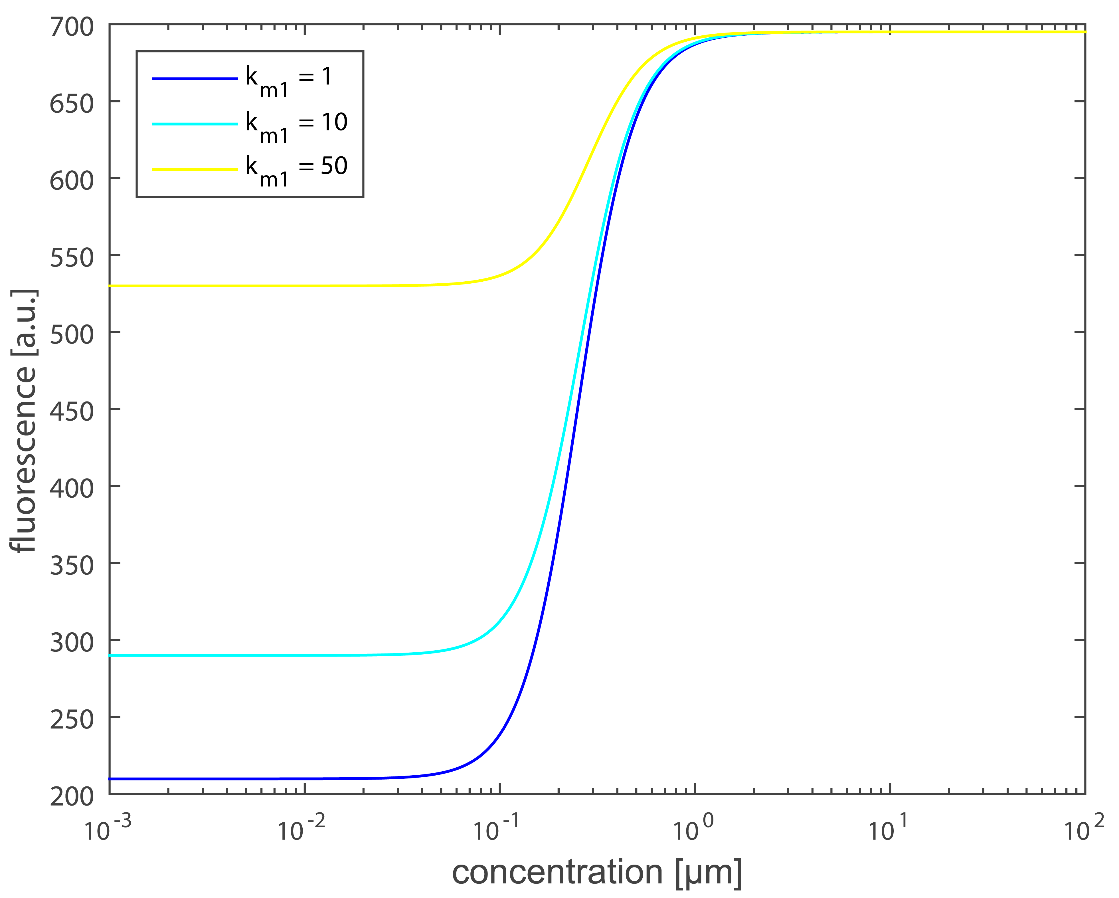 Figure 13. Fluorescence changes with time when k_m1 equals to 1, 10, 50. Difference has been show to illustrate the situation of different km1 under limited lactate concentration.